In an effort to reduce food waste, the apps connect buyers with vendors looking to unload good food that would otherwise be thrown away. 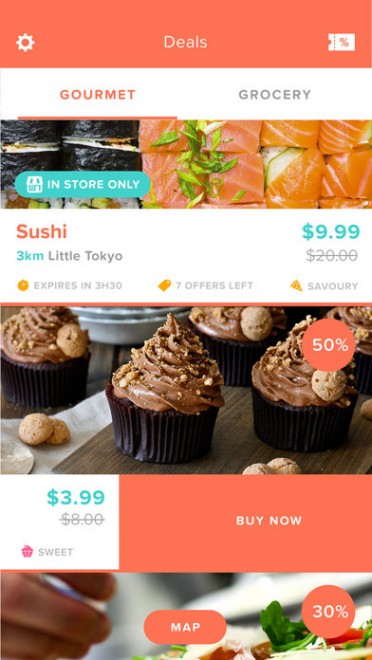 A shocking amount of restaurant food goes from today’s special to tonight’s trash, but two Canadian-made apps are looking to create a new stop along that path, in an effort to reduce food waste and to save savvy shoppers some dough.

About a third of all food produced for human consumption is wasted or lost each year. That works out to a shocking $31 billion worth of food trashed annually in Canada.

Enter Ubifood, an app developed by Montreal entrepreneur Caroline Pellegrini. It connects consumers with food vendors looking to sell leftover items for a discounted price at the end of each business day.

Pellegrini was inspired to create Ubifood while working in a bakery, where she witnessed just how much food was tossed by closing time.

Through the app, vendors upload photos of food they plan to throw out (but is still perfectly fine to eat) and users browse and pay for items online prior to pickup. Users can customize their search based on location and food preferences, and discounts can range from 15 to 80 percent (!) off the regular price.

Ubifood, which launched this past spring, has about 5,000 users and currently works with almost 40 vendors across Montreal, from high-end restaurants to cafés and fast food chains. The growing success of the app has inspired another food waste warrior to create something similar in Toronto. Josh Domingues’ Flashfood app will link restaurants and grocers with consumers looking for end-of-day deals. That app is set to launch sometime this month.

In an interview with CBC both Pelligrini and Domingues said that if their apps are successful, they’ll expand across the country.

Ubifood is available via the App Store and Google Play.

More:
How to cook a perfect steak indoors
Martha Stewart and Snoop Dogg are getting their own cooking show
University boosts salaries of female faculty after ‘systemic’ discrepancy found