Everything You Need To Know About The Mediterranean Diet

The Mediterranean diet is one of the most studied diets out there, shown to promote heart and brain health. Best of all it’s less of an actual “diet” and more of a way of life. (Which means it’s easier to stick to it.) 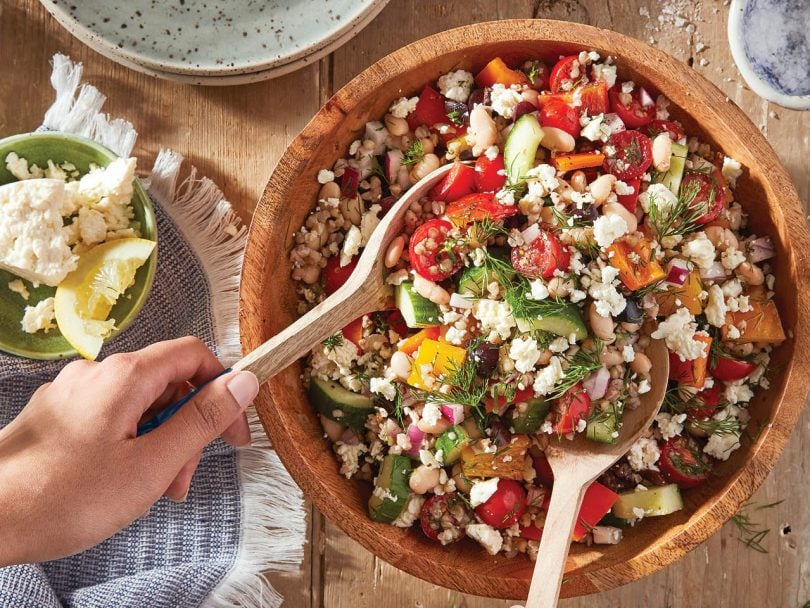 What is the Mediterranean diet?

Back in the 1950s, scientists were struck by a curious finding: Poor populations in southern Italy were far healthier than wealthy Americans. To find out why, they embarked on the groundbreaking Seven Countries Study—a decades-long epidemiological project that compared rates of heart disease and stroke with food and lifestyle factors. The diet was identified as a key factor in the low rates of heart disease and longer life expectancy seen in this region. However, the resulting Mediterranean diet is less of an actual “diet” and more of a way of life. Based on the traditional foods of the countries surrounding the Mediterranean Sea, it’s full of heart-healthy fats, nuts, fish and seafood, vegetables and fruit, legumes and whole grains. In other words, it’s simple, delicious and good for you, too.

What can you eat?

Research shows that following just two recommendations from the Mediterranean diet can decrease your risk of disease.

How can it help your health?

This is one of the most rigorously studied diets out there, and there’s a mountain of evidence to support it. While most famous for its significant impact on cholesterol levels and heart health, the Mediterranean Diet is also shown to be protective against a host of conditions from diabetes to mental illness, cancer and cognitive decline.

For instance, the Canadian Cardiovascular Society Dyslipidemia Guidelines issued in 2016 reports the Mediterranean Diet reduces the risk of cardiovascular disease events by 28 to 30 percent. Results from the PREDIMED study showed it reduced the incidence of type 2 diabetes by 52 percent. A systematic review and meta-analysis in the British Medical Journal showed a 13 percent reduction in risk of developing neurodegenerative diseases like Parkinson’s and Alzheimer’s, and 6 percent lower rates of or death caused by cancer. In another meta-analysis, participants consuming a Mediterranean Diet were 32 percent less likely to suffer from depression.

Certain foods emphasized in the Mediterranean Diet, like extra-virgin olive oil, have significant health benefits on their own, but it’s impossible to separate these elements out from the overall diet. Ultimately, it’s the combination of foods and their interactions with each other that make the magic happen.

The Mediterranean Diet goes beyond what to eat and offers a holistic philosophy on how to live for optimal health and longevity. In Mediterranean cultures, sharing meals with others is seen as incredibly important for social, mental and overall well-being. People take time out of their day to make eating with family, friends, neighbours or coworkers a priority. Cooking is an integral part of the culture, so meals are prepared from whole ingredients and processed foods are uncommon. They eat small portions of high-quality food that is fresh, seasonal and available locally. Perhaps most importantly, the Mediterranean way of life is founded on daily physical activity. But it’s not about time logged in the gym; it’s about incorporating movement into daily routines. Ride your bike to work. Take the stairs. Go for a short mid-morning walk. Take a five-minute stretch break. Do errands on foot. Plant a garden. Centre social events around physical activity. Bottom line: work at least 30 minutes of physical activity into every day for optimal health.

Research shows again and again that fad diets fail. Any improvements to health are typically short-lived because the diets themselves are restrictive and unsustainable long-term. The Mediterranean Diet is one of the few eating plans that is supported by science and shown to be sustainable over time. It’s sensible and nutritionally balanced, not eliminating whole food groups or macronutrients. No foods are off-limits, offering flexibility and making it easy to individualize. It focuses on healthy foods to incorporate more of rather than emphasizing rules around those to restrict. And while many diets make eating socially almost impossible, the Mediterranean Diet is founded on the cultural and social aspects of enjoying the pleasures of the table.

Emily Kichler is a registered dietitian based in Toronto.