Inexpensive, widely available and more complex than soy sauce, just a few drops of this condiment will amp up the flavour of soups, stews or even a simple bowl of noodles. 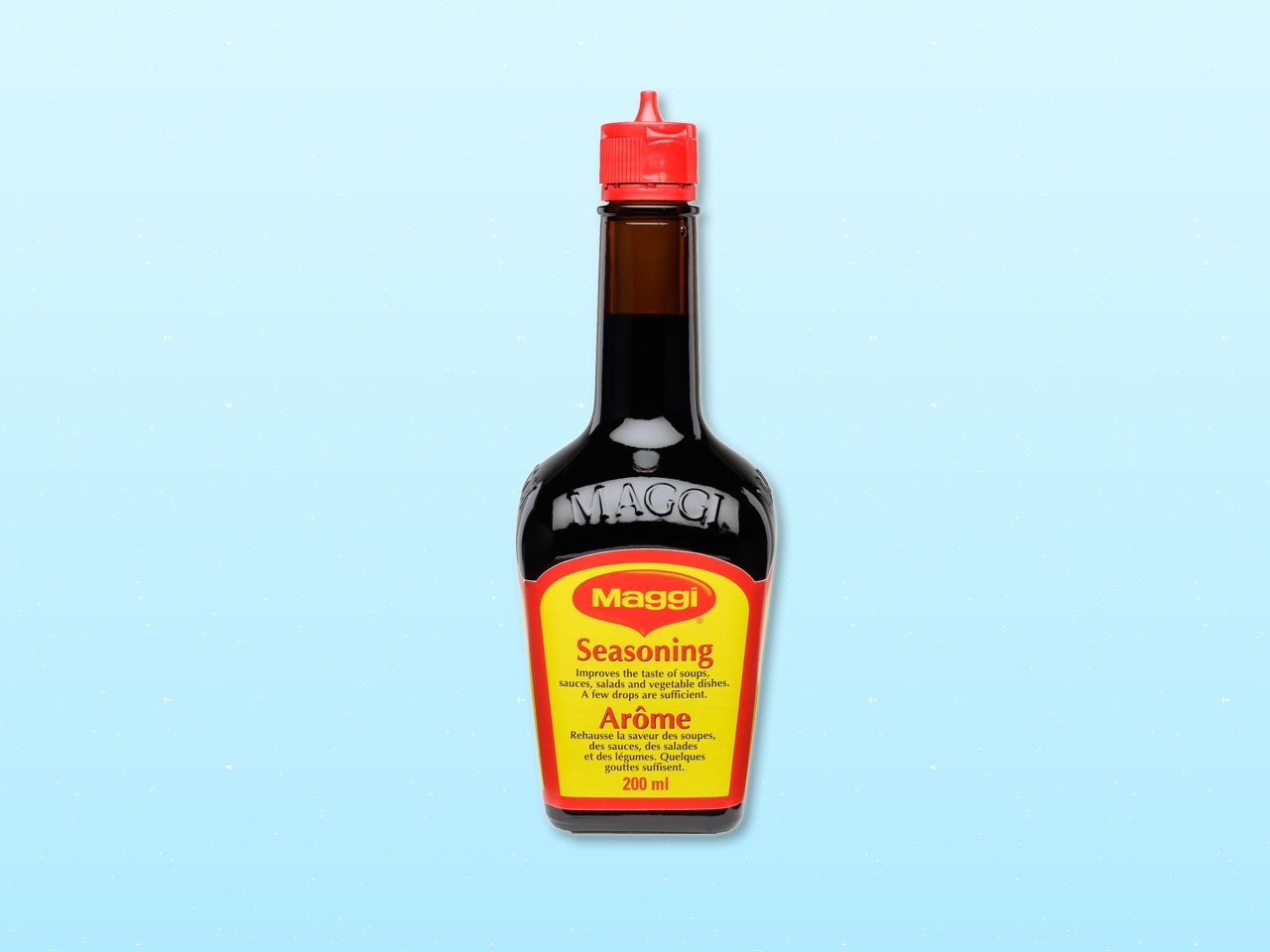 For first-generation Canadians like me, with parents from Hong Kong, Maggi Seasoning (pronounced like the name Maggie) is as as much a pantry essential as soy sauce or sesame oil. I grew up in a household where the dark liquid was an everyday addition to a whole variety of dishes.

Be it a delicate, steamed egg custard carefully topped with just a few drops or prawns stir-fried in the savoury liquid (leaving the cooked shells coated with an umami-rich flavour), few dishes were exempt. Even steaming bowls of instant ramen — already bursting with MSG — would receive two or three hits of the seasoning. 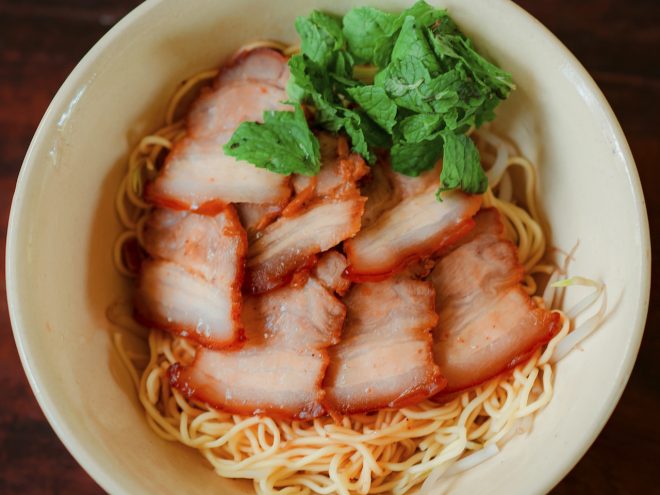 A few drops of Maggi add an extra hit of savour to ramen.

If you’ve never had Maggi Seasoning, think soy sauce — but next level. The label cautions, “a few drops are sufficient,” and I can attest that the dark liquid is potent. This savoury condiment, made with fermented wheat protein, is meatier, more complex and a little thicker than soy sauce. Ideally, you’d add it during cooking to infuse the whole dish (if making a soup or stew) but, like soy sauce, it’s also great in a marinade or as a finishing touch.

As frequently as we used the sauce in my childhood home, I’d never see it in food magazines or on the Food Network. I grew into adulthood assuming that Maggi was a uniquely Chinese ingredient— and then a few years back I walked into Rhum Corner, a Haitian bar and restaurant in Toronto.

Next to its bottles of rums from Cuba, Guatemala and Guyana, were rows of Maggi liquid seasoning — seeming so out of place to me — which is when I realized that the Chinese cannot lay claim to Maggi. Its actual origins, date back to late 19th-century Switzerland, where it grew so popular that it reached all corners of the world. There are now numerous Maggi seasoning variations around the world, each adapted for regional taste preferences. 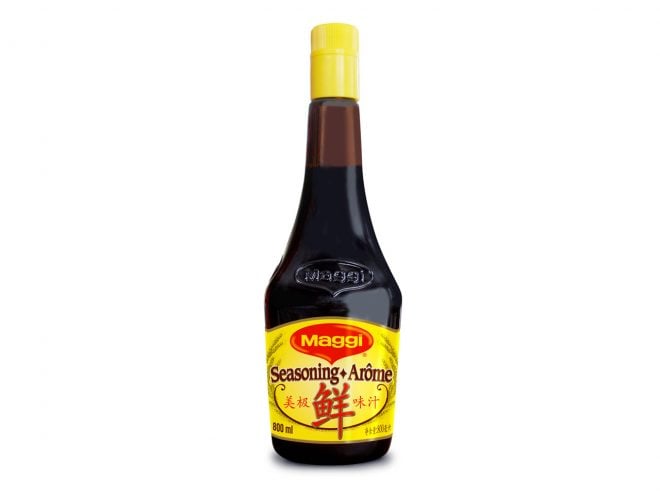 Chinese Maggi Sauce can spotted by its yellow cap.

In Mexico, the seasoning is known as Jugo Maggi and has a darker more concentrated flavor with further variations that include chili or lime flavours. In the Philippines, Maggi has a more pronounced garlic seasoning, and the United States — a country I consider irrationally suspicious of MSG — has removed the delicious compound from its formula. 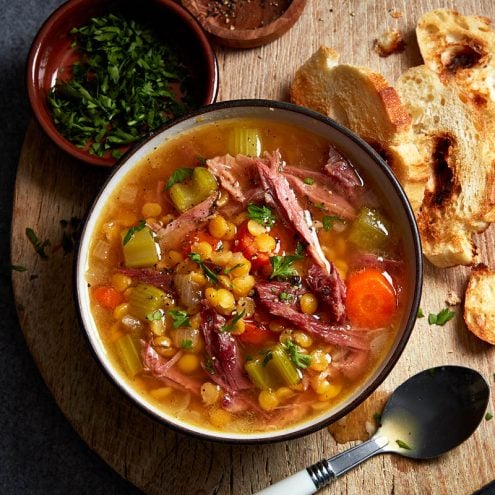 Add a few dashes of Maggi to your favourite winter dishes, like soups or stews. Photo, Erik Putz.

Canada has three versions of the sauce available. The Chinese rendition (yellow cap) has a more fermented flavour, but it’s the German version of Maggi that is the staple in Chinese-Canadian pantries. The German version is more complex and rich. It’s easily recognized by its red cap and is the bottle most commonly available in supermarkets.

Ever since uncovering the real story behind Maggi, I’ve begun to see it in restaurants and recipes more often. Perhaps inspired by the kitchens from their childhood, a new generation of cooks and bartenders are incorporating the seasoning into their menus. In place of Worcestershire sauce, Maggi is dripped into Caesars and Bloody Marys and chefs have also been adding it to pickling liquids, meat and fish marinades. At Chinese fine dining restaurants, the humble ingredient is featured on banquet menus with stir-fried lobsters and beef.

If you’ve been living without this flavour-amplifier, it’s an easy one to absorb into your everyday cooking. It’s inexpensive and it lasts for months (if not years). To start, try incorporating a few drops into your next meat marinade, gravy or soup (personally I use it most often as an add to soup and noodle dishes). Regardless of the food you’re preparing, I’m willing to bet that a few drops of Maggi take the flavours of your favourite dishes to up a notch…or three.