Everything You Need To Know About Induction Cooktops 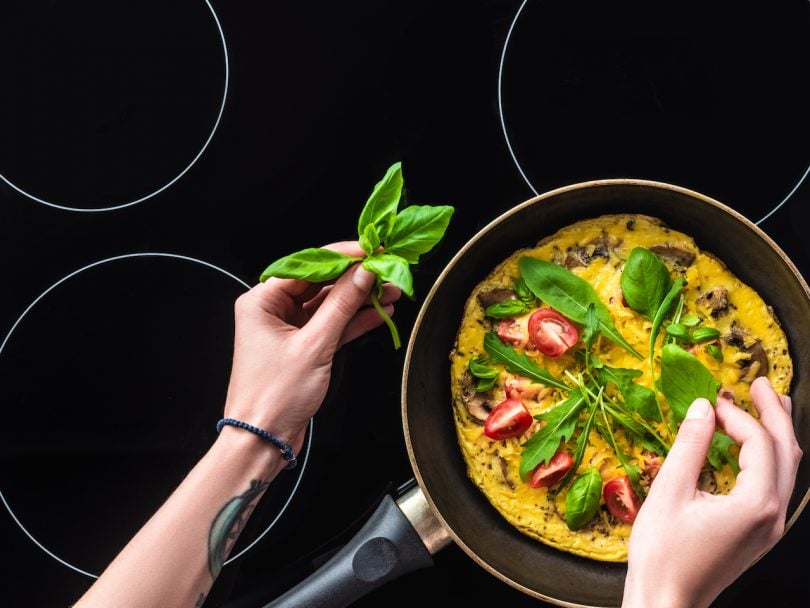 Burn Baby Burn could be my kitchen mantra—not because I scorch all our family meals, I just tend to singe myself, frequently. So, when I first encountered an induction cooktop a decade ago while working in a restaurant kitchen, I was a convert. A unique heating system means the induction surface stays cool during cooking, which helps eliminate a potential accident zone.

And, with the once-pricey induction stove tops becoming more affordable, there is growing interest among consumers in an appliance that promises faster heating times, improved heat consistency, and a quality gas alternative for those exploring green energy options.

If you’ve been curious about this kitchen game changer, here’s everything you need to know.

What is an induction cooktop?

Unlike most gas stoves, you won’t find knobs to control the burners; instead the burner heat is controlled using a digital touch display.

How does an induction stovetop work—and how is it different from an electric or gas burner?

An induction burner uses electromagnetism to generate heat. Inside the cooktop is a coil of metal (usually copper) that creates a magnetic field when the power is turned on. When a pot or pan is placed on this magnetic field, it generates an electrical current, which causes the cooking vessel itself to heat up.

Since induction uses an electromagnetic current to heat your food, the pots and pans you use must be made of ferrous metal (meaning they have to have magnetic properties). Steel, cast iron and enameled cast iron all work.

The easiest way to test your cookware for use on an induction stove is with a kitchen magnet—if it sticks, you’re good to go.

Induction cooking can heat a pot very quickly, because there’s no loss of energy to the air around the pot or pan (something you do get with radiant heat like a gas or electric stove). Boiling water a few minutes faster may not seem like a big deal, but it’s pure gold on a Tuesday night when you’re standing over a spaghetti pot while your family asks 40 kazillion times when dinner will be ready.

The heat efficiency also means a cooler kitchen in the summer, or a cooler space in a small kitchen or home.

Ever left your gravy on a low simmer only to return to a burnt or bubbling pot? Induction’s consistency (which cannot be matched by gas or radiant electric heat) will maintain a very low, steady heat as long as needed. You’ll be wowed whether keeping chicken noodle soup warm or doing precision cooking such as making a custard, melting chocolate or preparing hollandaise sauce for brunch. Also, heat adjustments happen near-instantaneously since the temperature increase is generated directly within the pot (benefits of that magnetic field) rather than going through the element, then to the pot.

The induction surface will not heat up if there’s no pan on it because it needs your pot to react with to generate heat. So even if it gets accidentally turned on—or you forget to turn it off—the surface stays cool. (Though if you use it to heat a pot, there may be some residual warmth left on the burner from the pot itself.) And some induction burners will automatically turn off if they detect a pot has boiled down or boiled over; due to lack of liquid in the pot, the temperature will increase and shut-off will occur at 500 F.

Easy and fast clean up

The other huge advantage of your induction surface staying cool? Easy clean up—no baked-on foods from spills or splatters. A simple wipe will keep everything looking like new. (The kids can drip ALL the pancake batter on that burner and you’ll still have a great Sunday.)

More environmentally friendly and energy efficient than gas or electric

Natural gas is a fossil fuel and burning it drives climate change (and also indoor air pollution). Getting people to switch from natural-gas-powered burners to an electric-powered stove top was tough when a gas stove’s functionality was clearly superior, but induction offers a great alternative. Induction stove tops are also more energy efficient than either electric or gas stoves because they release less ambient heat into the room and more into the cooking vessel.

Though price tags have come down, induction can still be costlier than gas or electric. Brands such as Kitchen Aid, GE, Bosch, Whirlpool and Samsung all sell induction models at stores such as Lowe’s, Leon’s and Home Depot with induction ranges (cooktop with oven) starting at $1,200 and going up to about $4,000. At the low end, electric and gas ranges can be found from $650 to $800.

If you want to test drive induction as a secondary cooking unit or in a small space like a dorm, portable, single induction burners are available at retailers like IKEA, Canadian Tire and Amazon for under $100.

Remember how we said induction only works with ferrous materials?  This could mean that some of your pots and pans will no longer work if they don’t have a magnetic base, so pull out that fridge magnet and check. And remember, if you want to use a wok you will have to use a magnetic, flat bottom style so there is enough surface contact with the cooktop.

Yes: cast iron (including your enameled pots like Le Creuset), steel and magnetic stainless steel (it must contain some iron)

No:  copper bottom and aluminum cookware (unless it has a magnetic bottom layer) glass or pyrex

There’s a learning curve with any new stove as you figure out what settings work best with your cooking.  The heat control on the digital display can take a bit of getting used to, some allow you to set exact temperatures but some just have numeric power levels.  Also, the quicker and more consistent heating may change the timing of your cooking.  If you use a wok, or toss your food, any time you remove the pot from the heat it will stop heating momentarily.