Underwhelmed by Ontario’s sex-ed curriculum, Lia and Tessa, two grade 8 girls from Toronto, took the issue of consent all the way to Queen’s Park

Ontario’s sex-education curriculum is the most outdated in the country—it hasn’t been updated since 1998, before the internet was a major factor in kids’ lives. A modernized draft mandating, among other things, that grade 1 students be taught the proper names of their body parts, was rescinded by the McGuinty government in 2010 in response to heavy backlash from conservative and religious groups. So when current Premier Kathleen Wynne announced her intent to roll out a revamped plan this coming September, two students took notice. Lia and Tessa, two Toronto area 13-year-olds, created We Give Consent, a social-media awareness campaign aimed at having the concept of affirmative consent—or “yes means yes”—included in the province’s new syllabus. With over 25,000 signatures (and counting), Lia and Tessa’s petition on Change.org received much public support, including Wynne’s—in early January, the premier pledged that consent will indeed be taught in Ontario’s classrooms starting this fall.

Ahead of their scheduled meeting with Wynne at Queen’s Park on Jan. 26, the two young women talked to us about why proper sex ed is much more than abstinence and STIs, and why “no means no” just doesn’t cut it anymore. 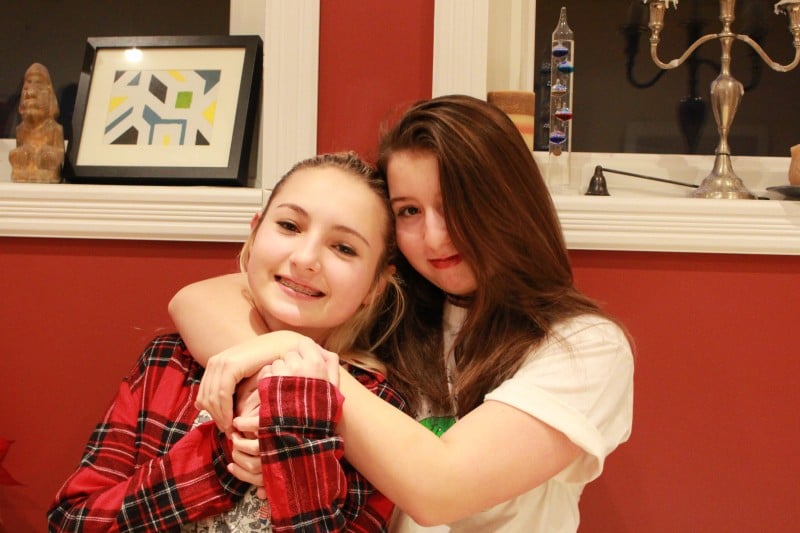 Friends Lia (left) and Tessa have campaigned to put consent in Ontario’s curriculum. Photo, courtesy of Lia and Tessa.

Q: How did the We Give Consent campaign come about? What first sparked your interest in the issue of consent?

Tessa: It all started with a school project for our grade 8 media-studies class. It had to be about a social-justice issue, so we’re making a 15-minute documentary on rape culture in the media. It was through our interviews with experts—like Steph Guthrie and Farrah Khan—that we kept hearing the phrase “consent culture,” and how, in order to end rape culture, have to create that. Part of our project was a call to action, so we decided that we’d create this campaign, “We Give Consent,” and petition to try to get consent in the curriculum.

Lia: Right now, what they do teach—which is very minimal—is basically just abstinence. It has an introduction to STIs, but the biggest part of what you learn is essentially “don’t have sex, and if you do, wear a condom.” It’s unrealistic, especially in high school, to teach abstinence; teens and kids grow up. They do develop relationships, and they aren’t necessarily going to be healthy ones because they don’t know about consent.

Q: What are specific lessons you’d like the curriculum to include?

L: It’s not just about “no means no.” It’s also that “yes means yes”—affirmative consent is a clear enthusiastic yes from both sides, where every person has a say. You’re acknowledging your partner, their pleasure and their desire. It’s also about valid consent. For example, if your partner is intoxicated or high, or if they’re not of legal age, that’s not valid. Silence isn’t consent; consent is very clear.

Q: It seems that, with heterosexual relationships in particular, a lot of guys will say, “I didn’t know she wasn’t into it,” so there seems to be a lack of clarity there.

Tessa: “I don’t really like that” is not consent. That’s why updating the curriculum is really important. You don’t want guys to keep saying, “I thought she was into it.” You should know that they’re into it. You need to know.

Q: What do you peers think of what you’re doing? What do they want to learn about?

L: Our peers are generally supportive. Obviously, we want to be taught proper sex ed, and that means learning about consent and LGBTQ and healthy relationships. I think at least among our friends, everybody seems to want to learn.

Q: Why is it so important to start teaching this stuff young?

L: We’re not necessarily going to be having sex right now, but cat-calling and slut-shaming happen all the time—even in schools. So if people are educated about respecting others and their bodies, then that could become less of an issue. And that’s not about sex; it’s about basic respect.

Q: How do you see that culture of “taking” manifest itself in real life and in the media?

T: Sex is something we don’t like to talk about. We don’t have open conversations about it in school, which means that all the information that kids learn about sex is from the media and from television. Oftentimes, it shows a guy is forcing himself on a girl, or he’s trying to get her to go out with him. That transfers into kids’ behaviours, things like boys calling girls names or making sexist remarks. They don’t learn respect for women—and men too. You see the ripple effect.

L: Relationships aren’t portrayed well in the media, but kids don’t know that; they don’t know what “right” is.

Q: What was your reaction when you heard the premier planned to include consent in the upcoming revamped curriculum?

T: I was on Twitter, and I was like, “Wait. Is this it?” I was really happy. It kind of felt like, “We did it,” even if we hadn’t been acknowledged. Then Kathleen Wynne tweeted us and we were jumping up and down. The reason we’re still continuing the petition is for active support. We don’t want to see the same thing happen that happened in 2010. Pushback will mostly come when the new draft is actually released.

Q: What kinds of positive outcomes will come of youth being taught about affirmative consent?

Tessa: It’s weird to think how it’s going to change so many kids’ lives and the environments in Ontario schools. Maybe [that means] fewer rapes and sexual assaults, or an increase in level of respect people have for each other. That’s how it can really change people’s lives. When you have so many kids learning that asking for permission is important, that doesn’t only apply to sex. It also applies to how you treat other people.