50 years on, the classic Jewish recipes from Second Helpings, Please! are still simple, fun and full of nostalgia. 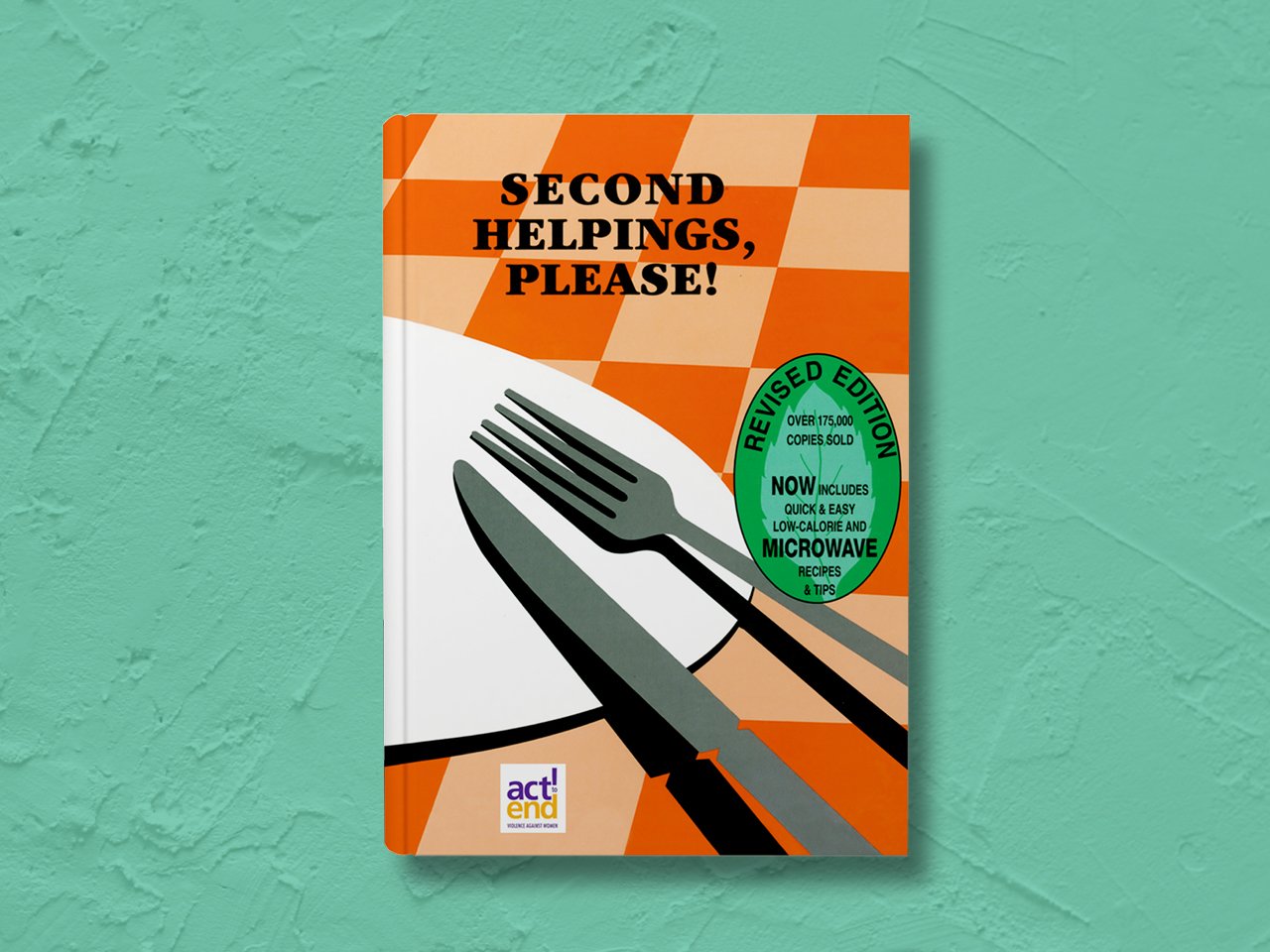 Think of Second Helpings, Please! as a sort of community cookbook gone viral. Since 1968, this spiral-bound collection created by a group of young Jewish women in Montreal featuring traditional kosher recipes has sold about 175,000 copies and has been reprinted 17 times. And for the past 50 years, it’s been aiming to make time spent in the kitchen “pleasant and rewarding”. Even if you’ve never made anything beyond a wonky fried egg, you should be able to successfully cook something in Second Helpings. 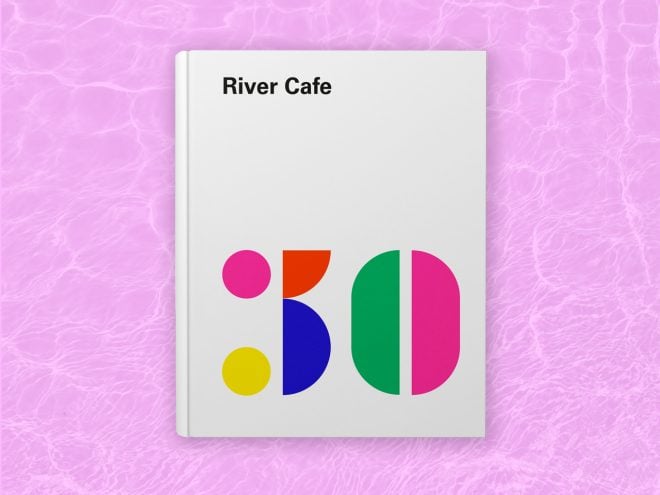 And that’s what I always hoped when I was a kid poring over my mom’s 1977 edition, since it was one of the only cookbooks my parents owned. Once I graduated from the Easy Bake Oven, I baked my first-ever batch of human-sized chocolate chip cookies with a Second Helpings recipe and would read it cover-to-cover dreaming of the fabulous dishes I’d cook up if my parents ever let me take control of the kitchen.

In honour of the cookbook’s 50th anniversary, I borrowed my mom’s yellowing 1977 copy of Second Helpings (you can grab the 2017 edition on Amazon and in-store at Indigo), because I wanted to find out if the recipes were as delicious — and easy — as I remembered.

This cookbook isn’t fancy; there are no pictures, just pages and pages of text — it’s like an encyclopedia of mostly Jewish recipes (they all respect kosher dietary laws) with simple instructions and easy-to-find ingredients.

Chapters are separated by handy tabs for sections like “appetizers and party treats” and “cookies, square and candies.” Each one chapter also has a short reference page with quick definitions of various cooking techniques and ingredients. As I was choosing recipes, I noticed that some of the instructions were a bit vague, but generally, the book has a direct yet approachable tone.

Since the book has been around for decades, many dishes have become staples on holiday tables across Canada and in the United States. I wanted to test out some classics to see if they’ve withstood the test of time. I made:

I started with the Tangy Sweet and Sour Meatballs because they’re one of the book’s most famous recipes. After glancing at the short ingredient list, I was dubious. While the meatballs are a straightforward mix of ground beef, an egg, minced garlic and matzah meal, the sauce calls for 2 cups ginger ale and 1 ½ cups ketchup. That’s it. (I ran out ketchup, so I subbed in about a quarter cup of tomato paste.) 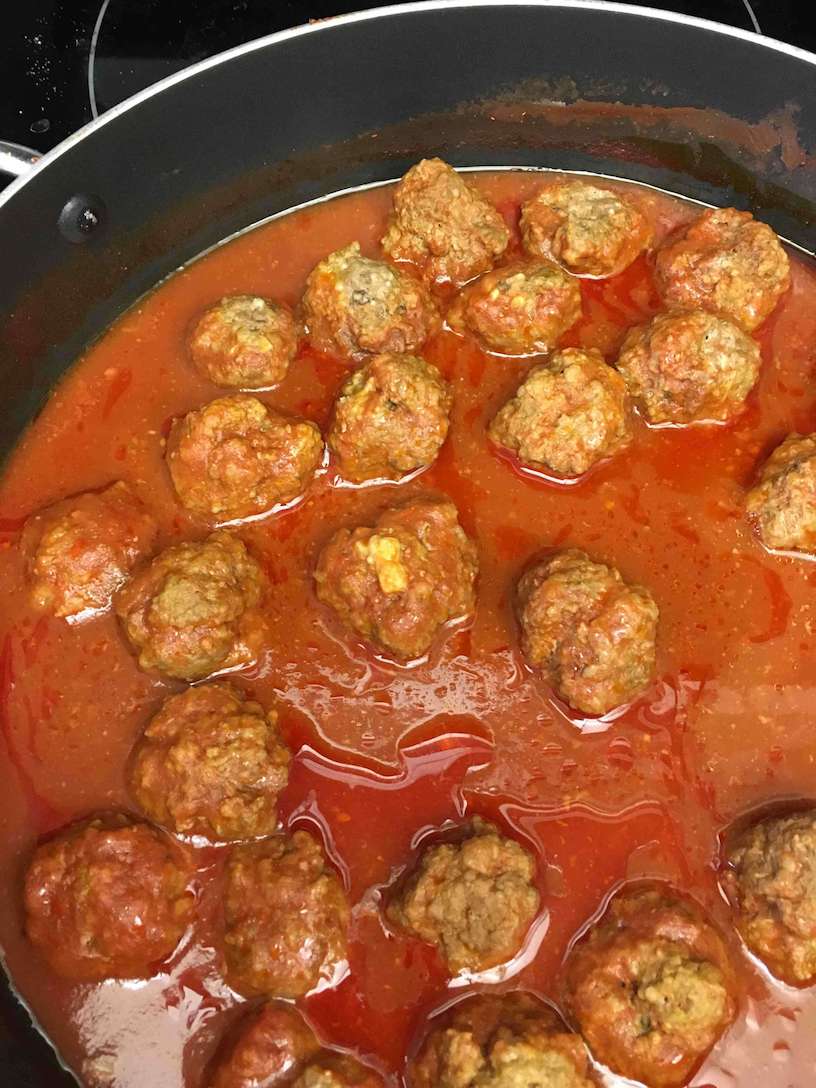 But I braced myself, and after rolling up my meatballs, I dropped them into a bubbling pan of tomato-ginger goo and let everything simmer together for two hours. I was expecting a disaster, but after one taste I was immediately transported back to childhood. While the sauce was a tad sweet, it tasted of pure nostalgia. Best of all, the meatballs stayed nice and moist even though I used extra-lean ground beef. You win, ketchup and ginger ale!

As the meatballs cooked, I worked on the Challah. While challah looks impressive, it’s actually pretty easy to make. You just need patience to let the dough rise three times. After the second rise, I braided my loaf (I attempted a five-piece braid because I was feeling fancy) and let it double in size before brushing it with egg yolk, dusting it with sesame and poppy seeds and sticking it in the oven. 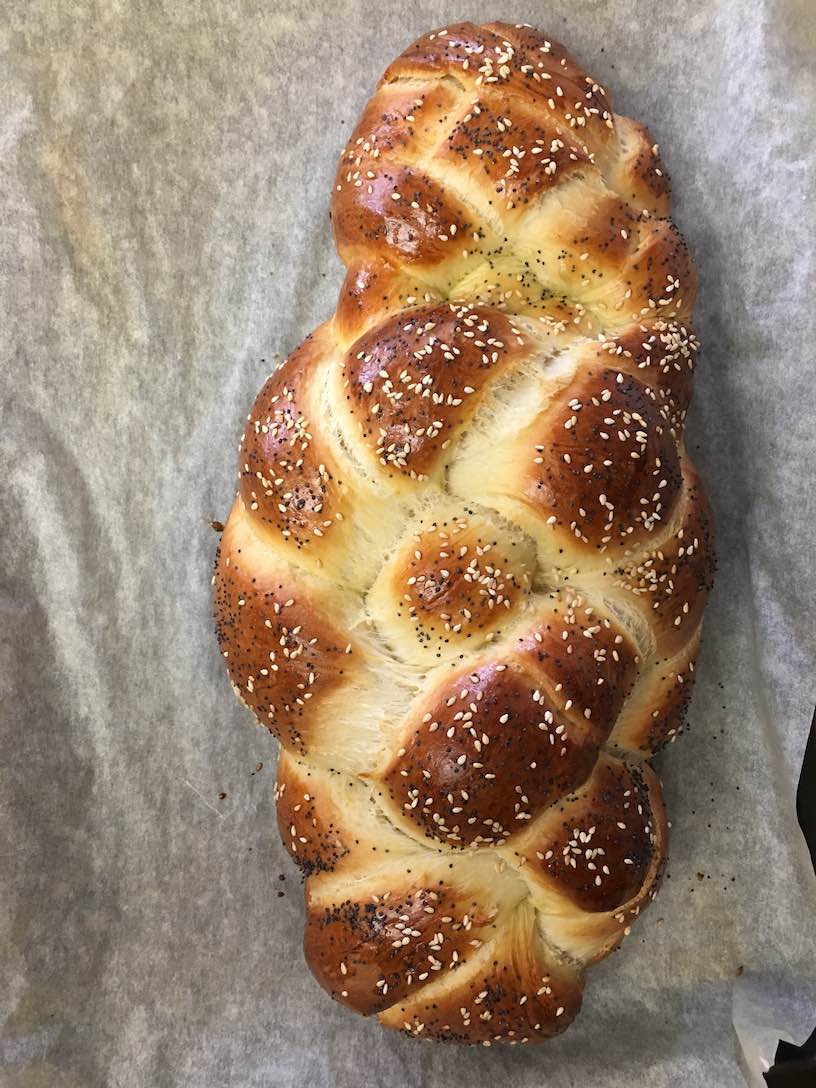 I should’ve stuck with the the three-piece braid. Photo, Amy Grief.

After about 25 minutes, the challah was a beautiful golden brown. Since warm challah is the best challah, I let it cool for approximately two minutes before tearing into it. Let’s just say this recipe is award-winning for a reason. 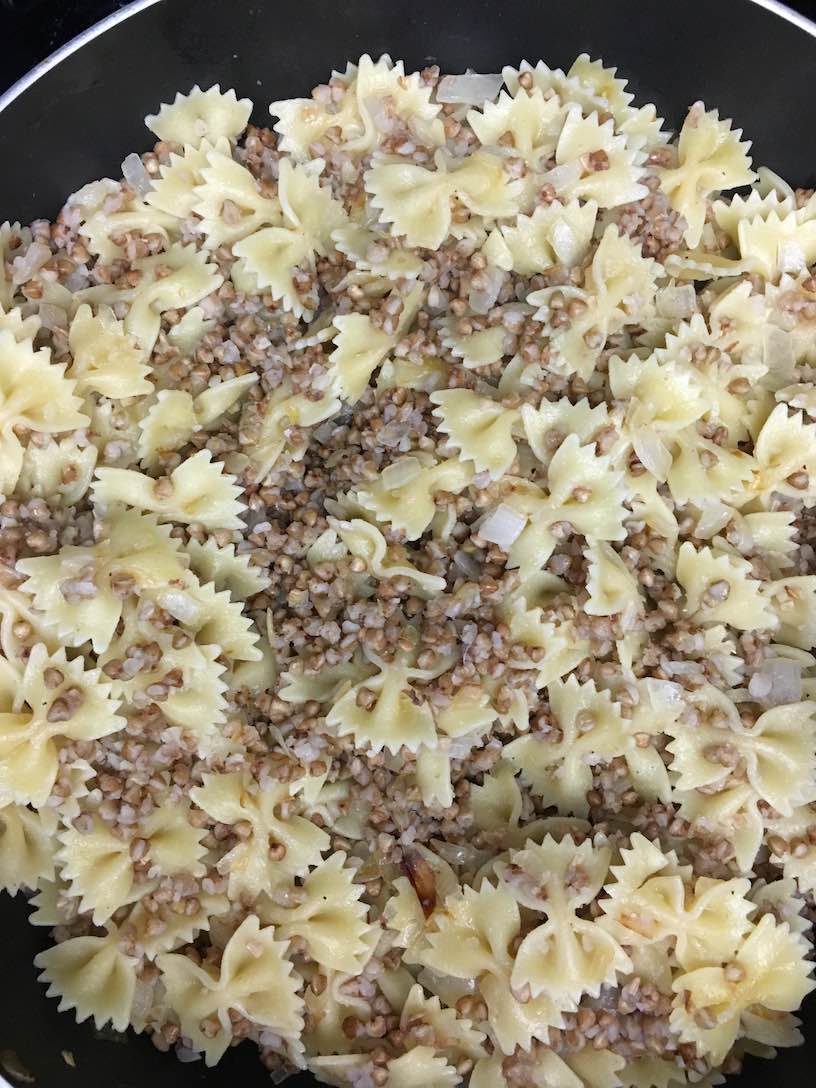 To continue the carb fest, I made Kasha and Bowties (or kasha varnishkes in Yiddish). To me, the combination of onions cooked in butter or schmaltz (chicken fat), farfalle pasta and kasha (toasted buckwheat groats) is comfort food at its finest. This dish tasted even better than I remembered, probably because I used the recommended three tablespoons of butter — way more butter than my mom ever would have used! 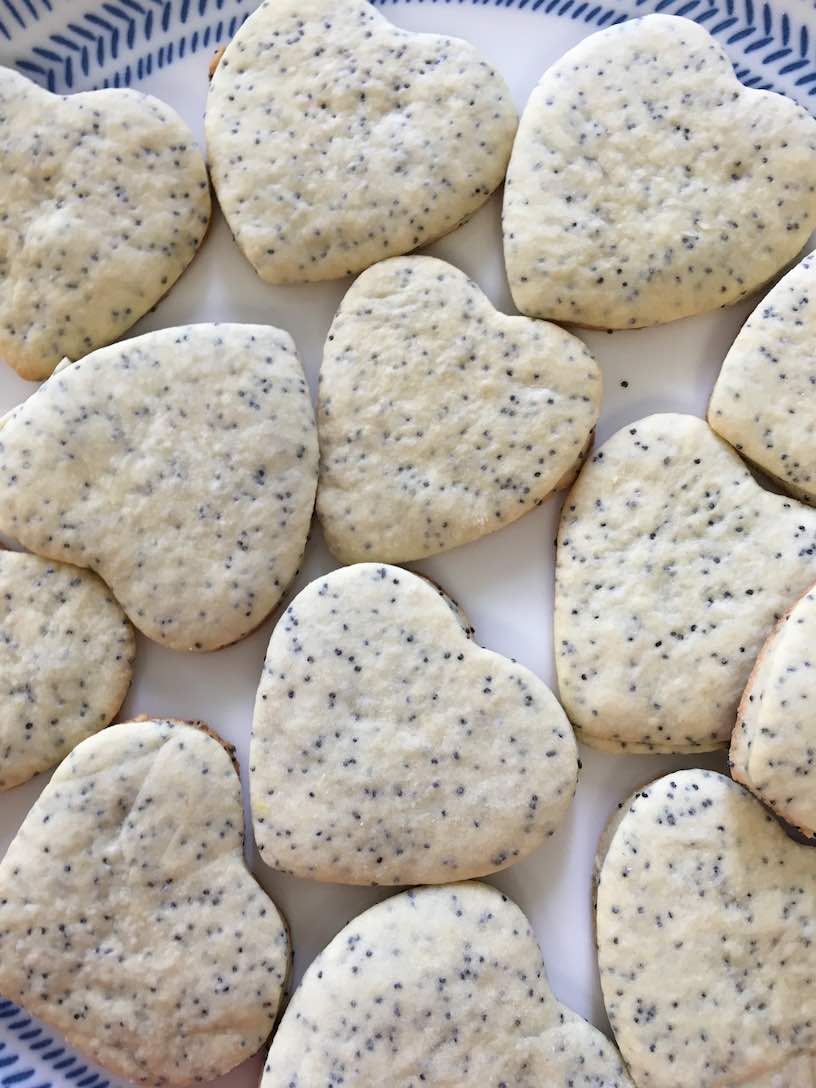 For dessert, I baked the Poppyseed Cookies because these lightly sweetened biscuits (which go perfectly with coffee and tea) remind me of my late grandmother. While her recipe is slightly different, Second Helpings, Please! delivered the mild and slightly nutty flavour I craved. You need to roll out the dough and use cookie cutters, but this recipe is beyond easy to follow and yields dozens of cookies, which I’ll happily be munching on all week long.

This cookbook is hardly gourmet, and some of the recipes are clearly rooted in the 1960s (like those tangy meatballs, which rely on ketchup and soda for flavour). But there’s a reason Second Helpings, Please! is considered a classic — because the recipes work.

Who To Buy It For?

Where Will It Live?

On your kitchen counter, splattered with tangy ginger ale-ketchup sauce.

Watch: How to make cranberry-glazed meatballs