Jean Paré’s ’80s-culture recipes—basic, creamy, made with processed foods—are decidedly unhip today, but they taught me to love cooking. 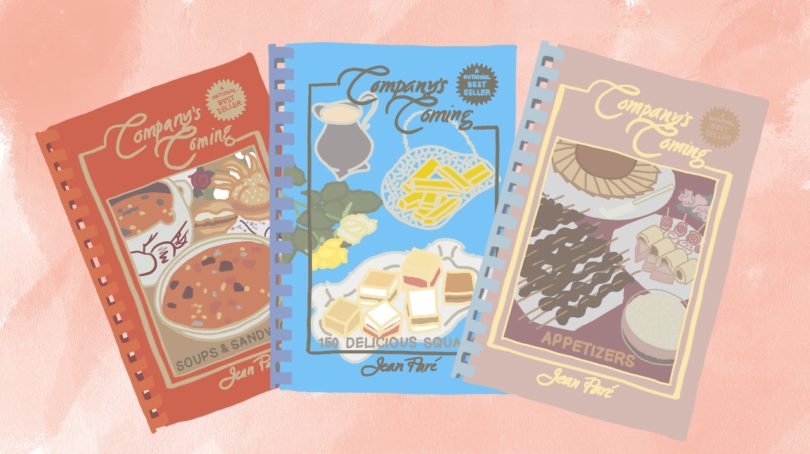 As a child, the only activity I really enjoyed—besides reading Harry Potter books and devouring Fudgesicles—was visiting my grandma. Any time I was bored, I would pop across the street for a prolonged visit. After rifling through the correspondence and newspapers on her dining table, I’d head to the kitchen to watch her make pies, cakes and squares from her manifold collection of cookbooks by her culinary idol: Jean Paré. She kept at least 35 of Paré’s Company’s Coming editions, with their candy-coloured plastic binding, on a prized shelf in the kitchen, painstakingly recording in them each time she prepared a recipe, along with the occasion (e.g. “Bob’s Funeral”).

If Paré’s name rings unfamiliar, it shouldn’t; she is one of the best-selling cookbook authors of all time, and Canada’s closest equivalent to a Julia Childs or Marcella Hazan. The former caterer from Vermilion, Alta. started writing cookbooks after clients requested written versions of her recipes. Between 1981 and 2011, she wrote over 200 books with unassuming, straightforward titles like Soups and Sandwiches, Appetizers and 150 Delicious Squares. They’ve sold over 30 million copies—more cookbooks than Yotam Ottolenghi. Paré received the Order of Canada in 2004.

A  great-grandmother whose helmet-like bouffant bears an uncanny resemblance to Margaret Thatcher, Paré hails from a generation where women learned to cook whether they cared to or not. Her genre of recipes—basic, creamy, made with readily accessible ingredients—is decidedly unhip in our current culture, where it’s easy to mistake effort as the foundation of a good meal. But it was Paré who helped me fall in love with cooking.

At 10, my grandmother noticed my budding obsession with her cookbook collection and bought me my first edition, an aquamarine blue copy of Kids Cooking. In addition to teaching me how to melt cheese and bacon on top of a hamburger bun in the toaster oven and bake the vile-sounding but deceptively delicious tomato soup cake with cream cheese icing, the cookbook gave me a taste of the independence and autonomy that cooking provides. From then on, I was hooked.

The ethos of a Paré recipe is prosaic simplicity. Dishes such as “Cheeseburger Pie” and “Saucy Ham Casserole” rely heavily on canned or packaged ingredients, and can usually be made in 30 minutes or less. Nuggets of folksy wisdom, like, “It’s a good idea to keep your words gentle and sweet—you might have to eat them one day,” are suffused throughout the books. This combo of guileless recipe plus corny-yet-uplifting humour implies an audience who had other things to do than spend hours feeding sourdough starter or pickling homemade sauerkraut. One can imagine a harried young mother with a toddler tugging on her pant leg, holding a fussy baby in one arm and consulting a Company’s Coming cookbook with the other. It’s dinner made through the path of least resistance. My grandmother, for example, seemed to enjoy cooking, but I’m not sure it ever occurred to her to interrogate whether it was an activity she actually enjoyed or if her hobby was simply an expectation that became second nature.

Company’s Coming cookbooks contain the kind of recipes that jokes about white people being afraid of seasoning are based on. “There is only one way to describe this salad – amazing!” she writes of a recipe containing romaine lettuce, hard boiled eggs, frozen peas, bacon and sour cream. A recipe for “Zucchini Coconut Loaf” is referred to as “spicy.” The top flavour notes of most entrées come from three main ingredients: dry onion soup packets, ketchup and cans of condensed soup. And yet, some of my fondest memories growing up involve sitting at my Grandma’s dining table drinking tea and eating whatever Jean Paré loaf she had prepared that week. I decided to procure some of these cookbooks to see if the perfectly satisfying recipes of my youth hold up to my present-day sophisticated palate.

After 20 years, Grandma’s Company’s Coming collection is still in heavy rotation: the most frequently used are battered and torn, with some missing their covers. Grandma graciously allowed me to borrow three books: Muffins and More, Casseroles and Light Dishes. “I never cooked very much out of Light Dishes,” she told me. “I prefer heavy food.”

From Casseroles, I skipped past recipes for “Chinese Chow” (ground beef, snow peas, condensed tomato soup) and “Ham Asparagus Rolls” (exactly what it sounds) in favour of something called “Saucy Meatballs.” This recipe was a favourite; according to her own inscriptions, Grandma cooked it 10 times between 1990 and 2006. I was slightly unnerved that the recipe only called for ground beef, breadcrumbs and water—no onions, egg, or any seasoning beyond salt and pepper—but I dutifully mixed the bland-sounding ingredients for accuracy’s sake. After browning the meatballs in a cast iron pan, I transferred them to a baking dish and drowned them in a mixture of condensed tomato soup, Worcestershire sauce and horseradish before popping them in the oven for 35 minutes.

The taste was something like a homemade Chef Boyardee’s: sweet and artificial, but an undeniably pleasant flavour beneath the metallic zing of canned soup. It certainly wasn’t going to win any Michelin stars, but considering how minimal the effort was, I was rewarded with perfectly passable, borderline delicious meatballs.

The “Chicken and Rice Bake” from Light Cooking didn’t fare so well. It was one of the few palatable-sounding recipes in a cookbook that was mostly different variations of cottage cheese. I’m assuming the inclusion of skim milk qualified this recipe as “light”; the recipe otherwise called for two chicken breasts baked on top of minute rice with a can of cream of chicken soup dumped overtop. The minute rice emitted a strong chemical smell as soon as I opened the package. After assembling the recipe and baking for a full hour, a horrific glop emerged from the oven. The canned soup jiggled like an aspic and the minute rice hadn’t lost its acrid aroma. I should have known to trust Grandma’s instincts: it was an abject failure of a recipe.

The “Harvest Loaf” from Muffins and More yielded better results. It was more or less a standard pumpkin bread with chocolate chips and nuts—and it was genuinely tasty. Even my boyfriend, a restaurant server with a highbrow palate, enjoyed it. I’ve since cooked the recipe a second time, in part to use up the rest of the gigantic can of pumpkin I bought just to make this recipe.

I was disappointed that Jean Paré’s recipes were not as delicious to me in 2020 as they were in 1995, but maybe the flaw lies in my expectations rather than the recipes themselves. Though much of her oeuvre appears abject to the modern palate—a recipe for “Curried Wieners” combines canned apricots with cut-up hot dogs—many of these combos would have been considered radical flavour experiments in their day.

One needn’t cook, or even particularly enjoy, Paré’s recipes to appreciate them for what they are; time capsules of a bygone era, and a life raft thrown to women who needed help cooking dinner. Paré helped pioneer a genre of recipes that lessened the burden of cooking, and for that she deserves to be remembered as fondly as possible, regardless of what her recipes are actually like.