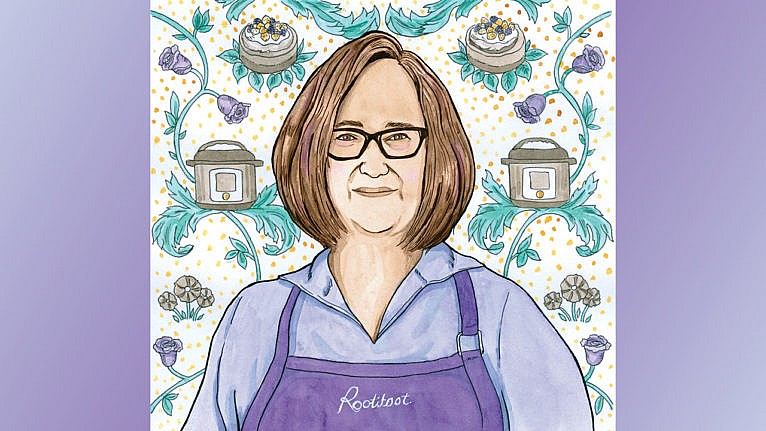 Offline, Ruth “Rootitoot” McCusker was a quiet woman who lived in a small studio apartment in downtown Campbell River, B.C. A stroke in 2007 had compromised her balance and resulted in a rare vision disability, leaving her unable to work; her only source of income was a government disability cheque. But unbeknownst to her neighbours, this doting grandmother of three led an invisible double life as an online Instant Pot guru, doling out recipes and advice to a loyal Facebook following nearly 100,000 strong. McCusker named the group “Rootitoot,” after a childhood nickname, and spent multiple hours each day tending to what she called her “secret garden”: responding to recipe questions and offering enthusiastic affirmations to her “best beloveds,” sometimes with the help of a screen reader.

Within Rootitoot’s first year, McCusker built a massive, loyal fandom that stretched well beyond Canadian borders and a lucrative cookbook franchise that had just started to take off. Copies of her cookbooks were bought as far away as New Zealand, and a business in the Netherlands called De Slowcookery purchased 300 printed copies for resale.

Though the appetite for her recipes was insatiable, McCusker herself remained a private, mysterious figure. Unlike many Canadian food media darlings, she didn’t do press interviews, never netted a cooking show or posted to Instagram or YouTube—arguably far bigger platforms for the genre. In her reluctance to embrace visibility, McCusker carved out her own niche form of celebrity: a trusted source of cooking expertise with next to no mainstream recognition. And when she suddenly passed away in February 2020, the fans who trusted her advice and took comfort in the supportive home-cooking community she fostered online felt that loss—deeply.

Born in Campbell River in 1954, McCusker spent her childhood in the scenic wilderness of Banff, Alta. Her cookbooks are peppered with nostalgic anecdotes about her rural upbringing, including one in which her family went out for a Sunday drive and returned to a bear in the kitchen, which her father proceeded to shoo away with a corn broom. In 1976, she married an RCMP officer named Ben Wilkowski. They had two children, Brian and Linda, and moved to Sylvan Lake, Alta. McCusker’s son, Brian Wilkowski, recounts that she’d always had a particular aptitude for cooking. His favourite dish? Mom’s gravy. “When she would make a roast beef dinner with mashed potatoes and have me mash the spuds, I got to learn how she made the gravy. It seemed so simple, and yet I never tasted anything like it at any restaurant or other place. Whether it was chicken, turkey, pork or beef, her gravy was amazing,” he says. “Whenever I had friends come over for dinner, they were always very impressed.”

Primarily a homemaker, McCusker worked odd jobs throughout her life, including running a catering business out of the local curling rink in the early 1980s. McCusker moved back to Campbell River in 1988, separated from Wilkowski and eventually began writing a home computing column for two local newspapers, which she went on to self-publish into four books. Later on, she worked retail at a women’s clothing store. But all throughout, she never stopped cooking. When McCusker moved into a seniors’ building in 2011, she frequently shared home-cooked meals with her neighbours. In December 2017, after purchasing her first Instant Pot, McCusker invited her son over to sample some fall-off-the-bone ribs.

In a bid to learn more about her newly acquired device, McCusker joined an Instant Pot Facebook group, and within a week had become one of its most active members. After two months of swapping shortcuts and recipes with her fellow so-called Potheads, McCusker received a politely worded message from a moderator suggesting she might try heading up an Instant Pot–themed group of her own—apparently not everyone appreciated her boundless enthusiasm. With the help of her daughter, Linda, she created a new group in March 2018 and christened it with her crown jewel, a cheesecake recipe she’d perfected over the past 45 years and converted for the Instant Pot. “Most people who try [it] say it’s the best cheesecake they’ve ever made,” she captioned the post.

“Ruth had her whole heart in every recipe,” says Crystal Eads, a long-time Rootitoot moderator who lives in Belgrade, Mo. Under McCusker’s close watch, the group became one of the rare spaces on the internet where members seemed to actually enjoy one another’s company. “There’s no ugliness allowed in the group,” says Eads. “Ruth didn’t want anyone to be bullied or made fun of.” Anyone caught violating the Rootitoot rules would be asked to stop, and repeat offenders were shown the door.

The intimidating nature of pressure cooking is enough to inspire apprehension in the most seasoned home cooks, but the launch of Canadian-designed Instant Pot multi-cookers in 2010 went a long way toward changing that. Still, as easy as the Instant Pot is to use, the learning curve can be steep for some, and McCusker’s enthusiastic, easy-to-follow recipes inspired confidence in even the most uncertain users. Her instructions were quietly reassuring, like having a soft-spoken grandma gently encouraging you every step of the way that everything will turn out fine. Anyone could look at a Rootitoot recipe and feel empowered to make a multi-layer lasagna or rice pilaf. Now boasting more than 110,000 members, the Rootitoot Facebook group became a cult following of one woman’s take on a globally loved kitchen device.

McCusker specialized in stick-to-your-ribs recipes, like beef stew and goulash, that had been adapted from yellowing recipe cards passed down in her family for generations. Once optimized for the Instant Pot, some recipes became superstars in their own right. Rootitoot’s lemon curd and cheesecake recipes are often cited as favourites among her devoted disciples. One enthusiastic group member wrote, “[My husband] told me to throw all my other cheesecake recipes away!”

This enthusiasm for McCusker’s recipes is warranted: I’ve tried them myself. I was hesitant to dig my Instant Pot out of the cupboard after a mishap involving a misplaced sealing valve—and I’m not even the biggest cheesecake fan—but I assumed that a cheesecake that got somebody booted from a Facebook group had to be good. The gooey graham-cracker-and-butter crust is first baked in the oven and cooled, then the rest of the cheesecake is cooked in the Instant Pot. (A spare lick of the beater confirmed that the cream cheese, sugar, egg and lemon zest mixture was unusually delicious.) I added a yogurt topping after pressure cooking and left the cheesecake to cool in the fridge overnight. McCusker promised the complicated multi-step process would be worth it, and I can’t say she was wrong. I proceeded to wolf down a slice after each meal for the next four days, and I would absolutely make it again.

When McCusker compiled her recipes into her first cookbook, she’d only planned to order 200 copies. The publisher, Gateway Rasmussen, convinced her to up the number to 700. “She thought she would have 500 cookbooks sitting in a storage locker for the rest of her life,” says Wilkowski. But on December 3, 2018, the day The Rootitoot Cookbook was released, every copy sold out within six hours. “There were well over 1,000 orders that day. We had no idea it was going to take off like that,” he says. “We started typing labels, and licking and stuffing envelopes at 10 or 11 o’clock in the morning, and by the time we went to bed we were just exhausted.” Wilkowski estimates that cookbook sales have since surpassed 50,000 copies and netted earnings well into the six figures.

With her brisk cookbook sales and massive Facebook audience, Ruth “Rootitoot” McCusker may well have been on track to become one of the most influential Canadian cooks of all time. And yet, “She was the most humble person ever,” says Eads. When she passed away in February 2020, some Rootitoot members remarked that the memorial post for McCusker was the first time they had ever seen a picture of her face.

Publicity was not McCusker’s primary interest, but she was keen on leaving the world with some sort of lasting legacy. “It seemed to me she knew the end was near,” says Wilkowski. “In the last few years, she said to me a number of times, ‘I just want to leave you guys something.’ ” In November 2019, McCusker went to see her doctor, complaining of stomach pains; shortly after receiving an initial diagnosis of gallstones, doctors found cancer, which had spread to almost every organ in her body. Three months later, she died.

Within hours of Wilkowski posting about his mother’s passing on Rootitoot, the group filled up with heartfelt remembrances of her work. Heidi Kimble of Denton, Md., wrote, “It is hard to understand the love you have for someone you never met but the loss of her has been devastating to me.” And Lucy Root of Harrison, Mich., posted, “[She] is the reason that I was able to take my IP out of the box and use it without fear.”

As humble as McCusker was, a small anecdote in the first Rootitoot cookbook suggests she was starting to grasp the impact she had on people’s lives. She explained her unlikely popularity with a scene from the animated Disney movie, Aladdin, in which Robin Williams’ genie describes the full extent of his magic
abilities: “Phenomenal cosmic power . . . itty-bitty living space.”

More than anything, it seems, McCusker got her wish.