Five health benefits of eggplant and the perfect Pad Thai

Eggplant is low in calories and high in fibre and antioxidants. Find out how to prepare this veggie in a healthy way to help your weight-loss goals. 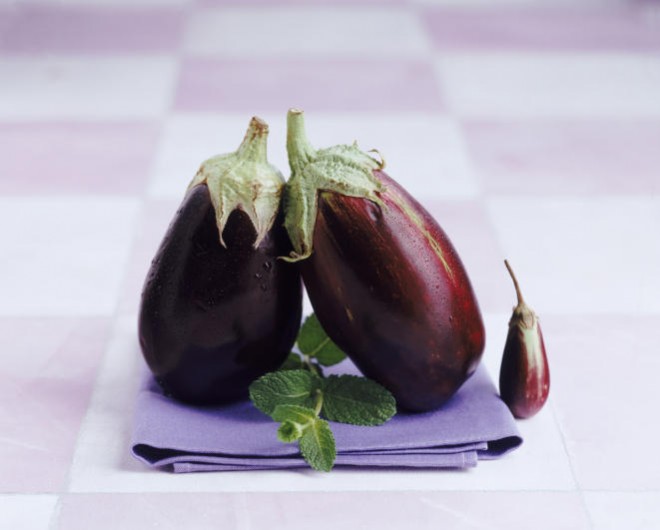 The Spanish nicknamed the eggplant “the apple of love” — it does keep the heart healthy, so there may be something to that saying. Eggplant — also called aubergine — contains anthocyanins and phenolic compounds, which protect your body from free radicals that cause aging. As well, the fibre in eggplant lowers cholesterol by preventing its absorption in the intestines.

Another great thing about eggplant is that because it is so fibrous, it works like a sponge, soaking up any flavours it is combined with. Because of its texture, eggplant makes a great substitute for meat in many recipes.

Eggplant is naturally low in calories, as long as you don’t fry it in oil. A deep-fried eggplant can absorb up to four times more fat than french-fried potatoes. That is a whopping 83 grams of fat in 70 seconds, or 700 extra calories. That’s like taking this healthy diet food and making it calorically equivalent to eating an extra-large hamburger with bacon! Stick to baking, roasting, grilling, broiling, and steaming your eggplant for maximum health effects.

Read on to learn how this amazing fruit can improve your health this winter:

1. Eggplant increases satiety and absorbs fat: Eggplant is extremely high in a type of viscous fibre that has the ability to bind to fat and create a feeling of fullness, with just 20 calories per cup of cubed eggplant. This makes eggplant an amazing addition to any weight-loss regimen!

2. Eggplant is high in the amino acid GABA:GABA (gama-aminobutyric acid) is an amino acid that has the ability to reduce anxiety, improve sleep, and quiet a racing mind. This makes eggplant a perfect relaxation food for the holiday season.

4. Eggplant is a source of potassium: Potassium has always been necessary for maintaining a healthy blood pressure, but has now been shown to help prevent gum disease as well. Potassium is a key component in fighting inflammation of the gums and arteries.

Eggplant is known to be versatile, but have you ever thought of using it as noodles? Nutritionist Adeline Chan created this incredible Pad Thai dish, with all the flavour and a fraction the carbs you would get in a traditional noodle dish. The cilantro and lime add a fresh lift, perfect on a cool fall day.

3. In a skillet on medium heat, add the coconut oil and sauté the garlic.

4. Once the garlic is slightly brown, add in the whisked egg immediately and scramble it.

5. When the egg is scrambled and no longer runny, add in the tofu and eggplant.  Mix everything together until the eggplant strips become limp like noodles.

6. Next, stir in the sauce (from step 2). When the sauce begins to boil, red pepper flakes can be added for spiciness, if desired.

7. When the liquid from the sauce has evaporated, turn off the heat and toss in the green onions, mung bean sprouts, and sesame oil.  Mix well and then transfer everything into a serving dish.

8. Top the dish off with roasted unsalted cashews, coriander, and lime.  Make sure to squeeze in some lime before eating and enjoy!
Makes 2 servings

Note: Eggplant belongs to the nightshade family, which also includes tomatoes, sweet peppers, and potatoes. People who suffer from arthritis may find they react to an alkaloid in nightshades that causes swelling and inflammation. Check your sensitivity to nightshades by removing them from the diet and then reintroducing them while watching for symptoms.

Nutritionist Julie Daniluk hosts Healthy Gourmet, a reality cooking show that looks at the ongoing battle between taste and nutrition. Her soon-to-be-published first book, Meals That Heal Inflammation, advises on allergy-free foods that both taste great and assist the body in the healing process.