Still The One: Why This Mayonnaise Beats Out All Competition

Did your favourite make the cut? 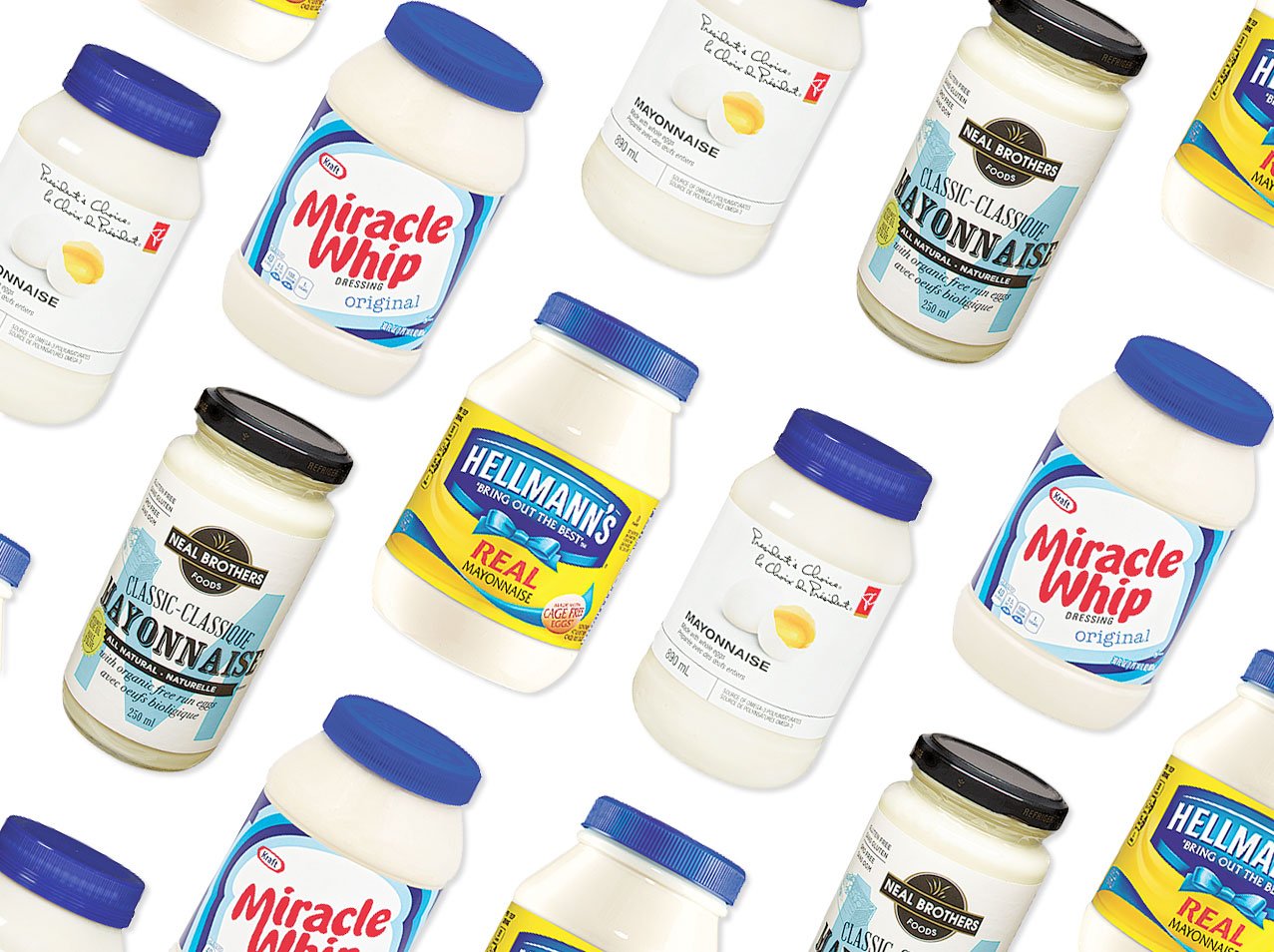 To those of us who can’t live without it, mayo is the king of condiments and a kitchen necessity. We also know it as many people’s culinary kryptonite — the mere mention of an egg salad sandwich is enough to make mayo-haters shudder.

Love it or hate it, mayonnaise is rich, tangy and supremely spreadable. Mayo brings extra oomph to BLTs, creates the creamy base for coleslaws, and is the perfect match for crisp, golden fries. With so many uses and all the school-lunch nostalgia that goes along with it, it’s no wonder mayo-users are fiercely loyal to their favourite brands.

After realizing how opinionated people were about this controversial sandwich spread, we were curious to see which mayo would win in a blind taste test. In our ketchup chip taste test participants gravitated towards the chip they had grown up with and recognized based on packaging. Without the visual cue of a familiar jar could people truly identify their go-t0 brand? And which mayonnaise was the fairest (and most potato salad-worthy) of them all?

Two miracle-whip devotees, one organic-only olive-oil based buyer, a homemade do-it yourselfer, and several Hellmann’s enthusiasts took part in the taste test. One participant admitted that mayo wasn’t a mainstay on their grocery list, but the rest were particular about which brand of mayonnaise made it into their macaroni salad.

For the test, we selected four main-stream mayo brands: Hellmann’s, President’s Choice, Neal Brothers and a generic No Name brand, all commonly found in the grocery store, plus Miracle Whip, which contains too little oil by weight to technically be considered a mayonnaise, but is still the preferred spread in millions of Canadian households (including a few of our tasters).

We sampled the mayonnaise plain on French fries, asking testers to assess each sample on flavour, texture and appearance, then rating them on a scale of 1 to 9, with 1 being poor, 5 being average and 9 being excellent (dramatic facial reactions were also taken note of).

All the mayonnaise had a distinct taste. Ultimately, Hellmann’s was our blue-ribbon winner, handily beating out all the other mayonnaise in the test with an average score of 7 out of 9. Even life-long Miracle Whip devotees and organic, olive-oil mayo buyers rated it as their top pick. The reason? Hellmann’s smooth texture and well-balanced flavour — with just the right tangy finish.

See Our Ranking Below: 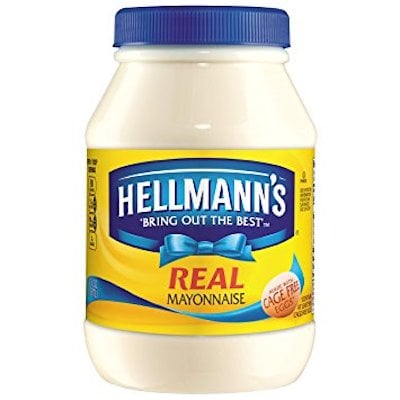 Taste: Well-balanced flavour and smooth, thick texture.
Best for: Potato salads, sandwiches, baking.
Dubbed as “classic” by one taster, it had just enough tang to make it enjoyable when dipped in fries, but not so much that it would overwhelm other flavours when spread on sandwiches or mixed into salads. This crowd-pleaser also won-out on texture, due to it’s smooth, ultra-thick consistency and pleasant sheen. 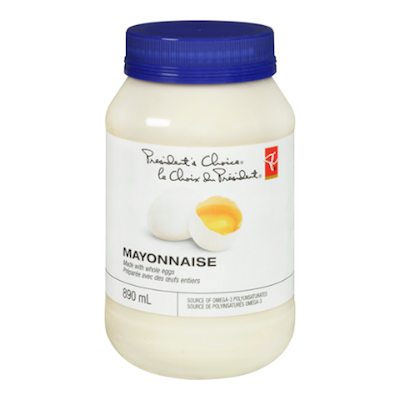 Taste: Mild tang and a distinct mustard finish with a golden colour.
Best for: Tuna salad sandwiches, fries.
The President’s Choice mayo was also well-liked among the taste-testers. It was heavier on the mustard notes, and the hint of Dijon made it a great pair with French fries. It was a light golden colour, which set it apart from the rest of the samples and made it  appealing to some of the more mayo-shy testers. One participant thought it tasted like it was homemade. 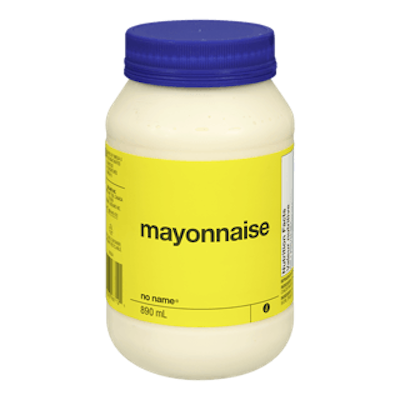 Taste: Sturdy and smooth with a very mild flavour.
Best for: Picky eaters.
The No Name brand fell just behind President’s Choice in tester’s ratings. It had good structure, but lacked the “zip and tang you expect from mayo,” said one tester. We suspect this may be due to the fact it used soybean oil opposed to canola oil — the choice in our top two picks. While some found it lacked depth of flavour other testers found the mild taste “suitable for all palettes.” 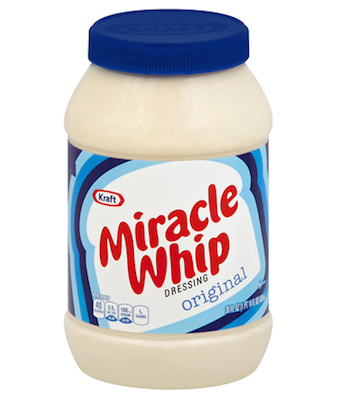 Taste: Super-tangy, sweet and loose.
Best for: Dips and sauces.
Although technically not a mayonnaise, we added Miracle Whip to our taste test to see if tasters could pick up on the differences. Tasters were split 50/50 on Miracle Whip. Some found it “suspect,” and were not fans of it’s sweetness and zip, while for others it brought back fond memories declaring, “it reminds me of the mayo I had on my sandwiches growing up — it’s just as loose as I remember it.” It even grew on one Hellmann’s lover who wrote, “at first a screaming NO! But on fries, as the flavour lingered, I suddenly thought, well, maybe I could be talked into this tangy/sweet flavour.” 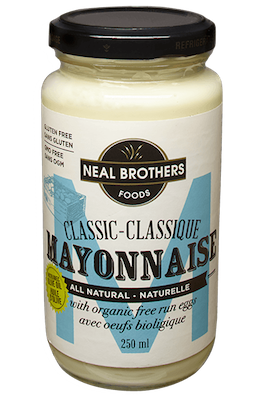 Testers were unfamiliar with the bolder notes that came from a mayo made with olive oil. It’s made from high-quality ingredients, including “organic free run eggs,” but testers found it lacked the sweetness and tang that some of the other samples had, as well as the dense, super-spreadable nature they were expecting from a mayonnaise. Although one of our testers swears by it.