Here’s everything you need to know about the woman who could take down Prime Minister Justin Trudeau. 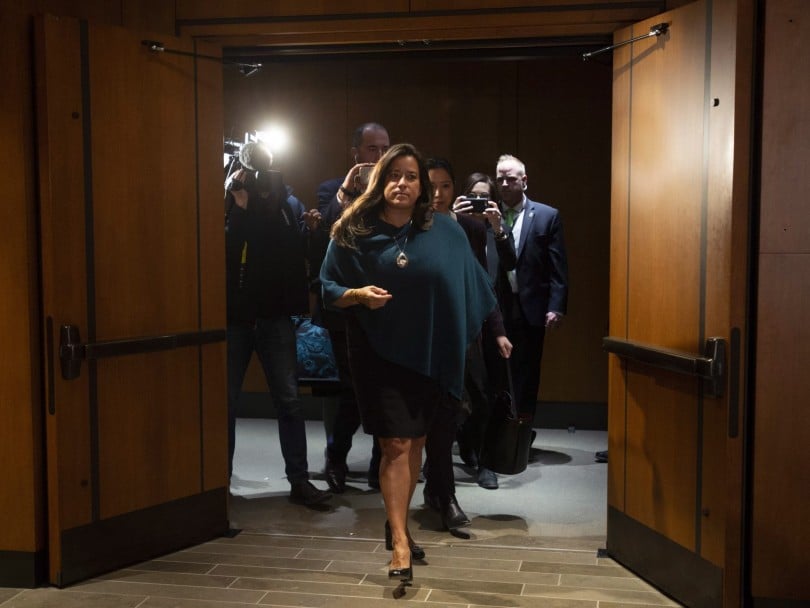 Jody Wilson-Raybould was born into politics. She’s the daughter of Sandra Wilson, a teacher, and Bill Wilson, a prominent First Nations leader who once told Prime Minister Pierre Trudeau that both his girls “want to be prime minister.” She comes from the Musgamagw Tsawataineuk and Laich-Kwil-Tach Peoples of North Vancouver Island, where she’s a member of the We Wai Kai Nation. That she now finds herself at the centre of the SNC-Lavalin affair is both shocking and not entirely out of keeping with her meteoric career and reputation as a political powerhouse.

Here’s how Wilson-Raybould became the most talked-about woman in Canada:

2000–2003: Wilson-Raybould, who earned her law degree from UBC, works as a B.C. crown prosecutor. She oversees cases in Vancouver’s Downtown Eastside, an area that grapples with poverty, addiction and mental health issues. Later talking to Maclean’s about prosecuting Indigenous offenders while recognizing the need for more social services, she said, “There was nothing that, as a prosecutor, we could substantively do.”

2003–2009: She moves to the B.C. Treaty Commission—the independent group charged with facilitating treaty negotiations between the federal and B.C. governments and B.C. First Nations—and is soon elected to the role of commissioner, and then chief commissioner in 2008. She earns a reputation as both driven and politically connected, a “born leader.” She marries Tim Raybould, a consultant to First Nations, in 2008.

2009-2015: Wilson-Raybould is elected as the regional chief of the Assembly of First Nations in 2009 and re-elected in 2012. She’s among the Indigenous leaders who meet with Prime Minister Stephen Harper during the Idle No More protests in 2013, and she later tells the CBC that she serves as a consensus-builder in “a world where there are complex and often controversial issues on the table.” Her popularity makes her a high-profile recruit when she announces she’ll run for the Liberal Party in the Vancouver Granville riding. “Amazing addition to #TeamTrudeau,” tweets Gerald Butts, Trudeau’s then-senior advisor and future principal secretary.

October 19, 2015: Wilson-Raybould wins her seat in the federal election, and rumours swirl of a cabinet post.

November 2, 2015: She’s named justice minister and attorney general in the new Liberal government. “V.Proud 2 be named Minister of Justice & Attorney General of Canada. Amazing team, Amazing time-Gilakas’la!” she tweets. Her appointment is roundly praised and seen as a key gesture that Trudeau will take Indigenous issues—particularly missing and murdered Indigenous women and girls—seriously. Trudeau and Wilson-Raybould embrace at her swearing in.

September 17, 2018: The challenges presented by the SNC-Lavalin case are raised during a meeting between Wilson-Raybould, Trudeau and clerk of the Privy Council Michael Wernick. She later claims he asked her “to find a solution.” She says she asked Trudeau whether he was “politically interfering” with her role, which he denied. It’s one of many instances she’ll later describe of what she says was political pressure to funnel the SNC-Lavalin case through the new “deferred prosecution agreement” law created by the Liberal government to allow companies to pay their way out of a criminal trial. Meanwhile, her tenure as justice minister has thus far been defined by her goal of improving Indigenous relations with the government, and she even appears at times to criticize her boss over the file.

December 2018: Wilson-Raybould’s chief of staff privately tells her he’s feeling pressure from Gerald Butts, then principal secretary to the prime minister, over the SNC-Lavalin case—details of which emerge in her later testimony.

January 14, 2019: Wilson-Raybould is named minister of veteran affairs in what’s widely viewed as a demotion. Pundits note the chill in her body language as she’s sworn into the role. She takes the unusual step of releasing a 2,000-word press release the same day (which she also posts to Twitter), in which she declares that justice must be “free from even the perception of political interference” and that the attorney general must “always be willing to speak truth to power.” Viewed simply as a defence of her record at the time, the statement is later seen as a condemnation of the SNC-Lavalin saga.

The Big Story: Jody Wilson-Raybould: The woman in the eye of the storm.

February 7, 2019: The Globe and Mail publishes a report that Trudeau’s office pressured Wilson-Raybould to help secure deferred prosecution for SNC-Lavalin. A few days later, the prime minister claims that Wilson-Raybould “confirmed” to him that he said she’s in charge of prosecution decisions.

February 12, 2019: Wilson-Raybould resigns as minister of veteran affairs and announces she’s retained the counsel of Thomas Cromwell, a former Supreme Court justice, to examine her options. She has not spoken publicly about the allegations since the story broke, claiming she’s prevented from doing so by solicitor-client privilege, but she remains active on Twitter during that time, mostly posting images of community events.

February 19, 2019: Despite her resignation, Wilson-Raybould attends a cabinet meeting (after reportedly being kept waiting for two hours while “her former colleagues hotly debated her request to address them about the SNC-Lavalin affair”) but refuses to comment publicly on the controversy.

February 27, 2019: In what’s described as “blistering” testimony, Wilson-Raybould tells the House of Commons Justice Committee of 10 meetings, 10 conversations and a series of emails with various members of the prime minister’s office during which she says she received “veiled threats” and experienced “political interference” from the PMO and various other officials. She says she believes she was removed from the justice portfolio over SNC-Lavalin, which Trudeau denies.

February 28, 2019: Trudeau tells reporters he’s considering “next steps” for Wilson-Raybould’s future in the Liberal caucus. MPs hold an emergency debate in the House of Commons on Wilson-Raybould’s testimony. Butts writes the House of Commons justice committee requesting he be called as a witness to give his side of the story in the SNC-Lavalin affair.

March 4, 2019: Treasury Board president Jane Philpott quits cabinet, saying she no longer had confidence in the government’s handling of the SNC-Lavalin affair.

To the incomparable @janephilpott, truly the #MOC…For almost 4 years our country has witnessed your constant & unassailable commitment to always doing what is right & best for Cdns. You are a leader of vision & strength & I look forward to continuing to work alongside you. ❤️U. pic.twitter.com/bwL6ouQjSA

March 6, 2019: Gerald Butts testified before the House of Commons justice committee, saying Wilson- Raybould never complained about improper pressure to halt the criminal prosecution of SNC-Lavalin until Trudeau decided to move her out of her coveted cabinet role as justice minister and attorney general. Liberals used their majority on the committee to reject an opposition proposal to recall Wilson-Raybould to respond to Butts’s comments. She issued a statement saying she’d be happy to return to the committee if invited.