Here’s Where Ontario Parties Stand On Key Issues This Election

Everything the four leading parties have to say about the environment, affordability and housing, and healthcare ahead of the June 2 election. 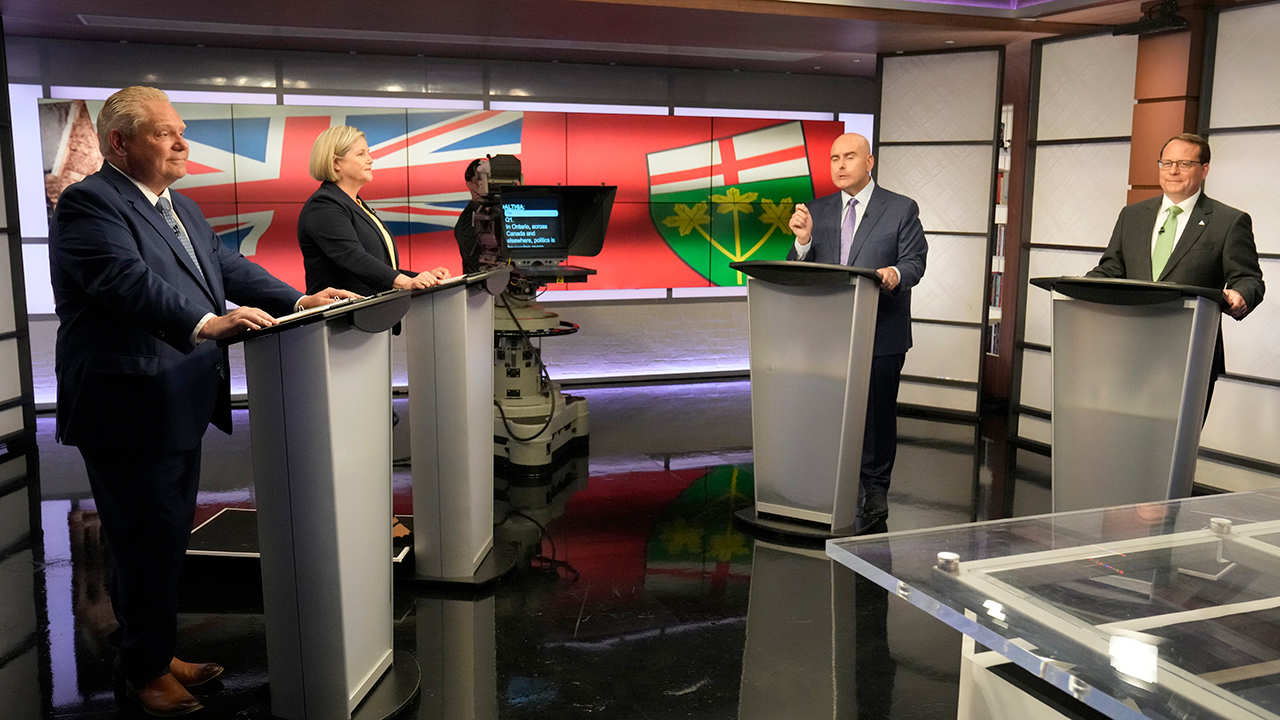 Elections can be daunting. Most voters aren’t paying attention to the day-to-day happenings in their provincial legislatures, and there is often so much information to wade through that it can be hard to identify the signal through the noise.

The pandemic dominated the Ford government’s most recent mandate, but now there are other pressing issues to contend with—including the environment, affordability and housing, and healthcare. Here’s what the four leading parties—the Progressive Conservative Party, Liberal Party, NDP and Green Party—have to say about them.

The United Nations’ Intergovernmental Panel on Climate Change has raised the alarm that if nations don’t drastically reduce greenhouse gas emissions and transition to green economies, we can expect to see more extreme weather events, animal species go extinct, and the melting of the ice caps. So, at a provincial level, what will the next Ontario government do about it?

Progressive Conservatives: When Ford became premier in 2018, he scrapped the previous Liberal government’s climate plan—a comprehensive strategy to incorporate cap-and-trade, cycling and walking infrastructure, electric vehicles, agriculture and scientific research. For the 2022 election, Ford is focusing on what he calls clean electricity through his Low Carbon Hydrogen Strategy, which invests in electric vehicles, a natural gas expansion program (though natural gas is still a greenhouse gas), and the development of a voluntary clean energy credit.

Ford’s budget also emphasizes building or attracting industry related to clean-energy transition. That includes a critical minerals strategy, released in March, with a focus on mining for electric-vehicle components and a commitment of $29 million in exploration and innovation funding, atop larger sums promised for related infrastructure.

New Democrats: In addition to a commitment to reach net-zero emissions by 2050, an NDP government plans to create one million jobs that support the transition to a greener economy. The party also plans to introduce a new cap-and-trade system that would see big corporations paying what it says is their fair share for their outsized contribution to greenhouse gas emissions. Party leader Andrea Horwarth is also committed to improving the province’s disaster assistance program that would support those affected by natural disasters, such as the recent storm in Ontario.

Liberals: One of the key components of the Liberal Party’s environmental strategy is to introduce $1 transit throughout the province for one year, along with $40 monthly transit passes afterward. According to the party, this would reduce the number of cars on the road by 400,000 daily. In addition, the Liberals, if elected, plan to cut carbon pollution in half by 2030 and reach net-zero emissions by 2050. The Liberals are also looking to combat urban sprawl by expanding the Greenbelt, and they would create five new provincial parks.

Greens: The Green Party’s Climate Plan lays out a transition from a fossil fuels economy to a green economy with three key priorities: reducing greenhouse gases by investing in public transportation and clean, renewable energy resources; restoring water and nature, including working with Indigenous partners for conservation and protecting wetlands, forests and watersheds; and transitioning to a healthy, affordable and resilient economy by investing in training a new green workforce to ensure that no one is left behind.

Housing prices in Ontario, especially in Toronto, were already inflated pre-pandemic. But, as people sought out bigger spaces after COVID-19 hit, prices soared and made it increasingly difficult to enter the market. This also caused rent to spike without wages being increased, making it challenging for anyone on a fixed income or in a precarious employment situation to improve upon their housing situation. And all this comes amid record inflation across the country. Here’s what the parties have committed to when it comes to housing and affordability.

Progressive Conservatives: The Conservatives’ plan to increase housing supply zeros in on the process of home building. The party has proposed accelerating approvals and reducing red tape. Ford is also proposing an investment of $19.2 million to reduce backlogs at the Ontario Land Tribunal, which adjudicates issues related to land-use planning, environmental features and land valuation.

This March, the Ontario and the federal government also announced an agreement for a new Canada-wide early learning and child care system. The Ford government committed to achieving an average of $10-a-day child care by September 2025—a deal struck in partnership with the federal government. Ontario’s 2019 budget introduced the Ontario Child Care Tax Credit, a refundable tax where families with a household income of under $150,000 can claim up to 75 percent of their child care expenses, irrespective of care options. (This credit can be used in conjunction with the new child care agreement.).

New Democrats: While $10-a-day daycare is a sure deal, the New Democrats say that they would speed up the process if elected so that Ontarians who need access to that program can do so faster. In addition, they’ll also reduce the fees associated with before- and after-school care.

To address the province’s housing crisis, the NDP plans to build 250,000 more affordable homes dedicated to those who need them. This would work in tandem with a pledge to diversify housing stock to include duplexes, triplexes and townhomes. In an effort to reduce renovictions and landlords drastically increasing rent when a tenant moves out, the NDP also promises to ensure a new tenant’s rent is equal to what the previous tenant paid.

Liberals: The Liberal Party plans to save parents $10,000 annually per child in childcare costs by leveraging the already agreed to $10-a-day plan—that’s more than the $7,300 estimate provided by the federal government in 2021. The party also intends on raising the minimum wage to $16 per hour, 50 cents more than what the PCs are proposing.

With regards to housing, Steven Del Duca’s Liberals plan to build 1.5 million new homes, including 138,000 “deeply affordable” homes (78,000 of those are earmarked for new social and community homes, 38,000 for supportive housing, and 22,000 for Indigenous peoples). These homes will include semi-detached houses, triplexes and townhomes, which will increase population density without towers. The party says this plan will also help create 150,000 jobs per year. For renters, they’ll bring back rent control, and they’ll also take a “housing first” approach, which would see the unhoused receive access to permanent housing immediately.

Greens: The Green Party promises to build 182,000 permanently affordable community housing; about 60,000 of those will be permanent supportive homes. In order to build these homes, the party commits to mandatory zoning inclusion (a policy that requires a certain number of new homes to be affordable for low-income persons) and a seed fund (a small grant for businesses or non-profits) for co-operative housing. For the precariously housed, the Greens are taking a housing first approach, more specifically partnering with the federal government on their National Housing Strategy to renew 260,000 community-housing rental homes over the next decade. The party also intends to partner with non-profits to use public land for affordable rentals and home ownership options. And they propose to increase funding for the Landlord and Tenant Board to provide greater security and protection for renters.

The Greens’ platform commits to working with the federal government to ensure universal access to high quality $10-a-day childcare and to provide a minimum wage of $25 per hour for childcare workers. They also affirm their commitment to apply gender-based analysis to all government legislation and programming, which would require every policy and program to undergo evaluations of the potential positive and negative impacts on people based on gender, race, class, immigration status, and more.

Ontario’s healthcare system was already in a precarious state before COVID-19. Now, our doctors, nurses and other healthcare professionals are burnt out and are in dire need of support. Public healthcare is a cornerstone of Canadian identity, but without adequate support for the system, it will begin to collapse. Here’s what the parties propose with regards to healthcare.

Progressive Conservatives: To improve emergency health services, the PCs are investing $7 million in 2022–23 to support the Dedicated Offload Nursing program. This investment will fund additional healthcare providers to assist with offloading ambulance patients to the emergency department, allowing paramedics to respond to other emergency calls.

This new funding will also support the recruitment of up to 60 frontline healthcare providers to improve ambulance patient offload in emergency departments. In 2021, the Dedicated Offload Nursing program increased ambulance availability by approximately 500,000 hours. This investment will also support expansion of the program into other communities and regions including Guelph, Sault Ste. Marie and the Muskoka region.

New Democrats: The NDP will leverage the federal Liberal-NDP confidence and supply agreement to advance affordable dental coverage for Ontarians. The party is also looking to hire 30,000 new nurses and speed up the approval of the credentials of 15,000 internationally trained nurses. They’ll also hire 10,000 personal support workers and give them a raise. And the party will work to repeal Bill 124, which limits wage increases for public sector workers, including nurses—a profession that was lauded early on in the pandemic but has seen little benefit otherwise.

Liberals: The Liberals also say they will repeal Bill 124. In addition, they will seek to hire 100,000 healthcare workers and hire internationally trained health professionals. To combat wait times, Del Duca and his team want to create 3,000 new hospital beds and ensure that Ontarians have access to prescription drug coverage, and that private benefit plans cover all drugs in Ontario’s formulary.

Greens: The Greens will take a preventative approach to healthcare. This includes partnering with the federal government to implement a universal pharmacare policy, and investments to address the social determinants of health. The latter includes expanding access to Family Health Teams—which include primary care physicians, nurse practitioners and other healthcare professionals who provide primary care for communities—to ensure a holistic approach to healthcare, such as increasing funding and access to midwives. For hospitals, the Greens will increase year-on-year hospital base operational funding at a minimum of five percent per year.

Like the Liberals and NDP, the Green Party proposes to increase support for healthcare workers by repealing Bill 124. They also commit to allowing healthcare workers to collectively bargain for fair wages. Until this is reached, the Greens propose a minimum wage of $35 per hour for nurses and $25 per hour to personal support workers.