How quickly should you lose weight to keep it off?

James Fell breaks down the numbers and shows us the pace that real (and long-term) weight loss happens at. 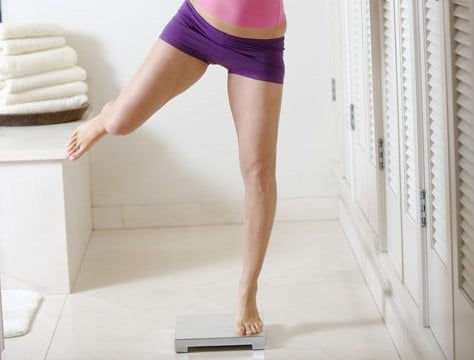 How quickly should you lose weight to actually keep it off?

Claims of products and programs that will allow you to lose a pound a day are rampant, but in this case it was actually feasible, because the man in question started at a weight of more than 600 pounds, and he spent those 200 days in a tightly controlled environment where all his exercise and eating was carefully monitored, motivated and measured.

But what about you?

Many of the shows we watch and articles we read leave us with the idea that rapidly dropping fat is the key (and a reality). Like the aforementioned case, the people who succeed in these situations are significantly obese to begin with and living in tightly controlled environments.

Your starting weight plays a key role in how fast (or slow) you lose weight. The more overweight a person is, the faster they can lose. Conversely, if you want to lose those last 10 pounds, the process will be painfully slow.

Concept 1: The obese can lose weight faster
You can lose weight if you’re really heavy for a few reasons. One is simply that the body favours using fat as a fuel source if there is a lot of it around. Another is that obese people actually have faster metabolisms because of how much work it is to keep all that tissue functioning.

It takes a lot of food and sedentary living to create extreme obesity but once a heavy person starts moving, and rationally restricting calories, they have the ability to create a significant caloric deficit that will lead to rapid weight loss. Even a walk is a major workout if it involves carrying an extra hundred pounds.

Concept 2: For the slimmer, it will be slow
For all the reasons mentioned above, a person who is not heavy and interested essentially in cosmetic weight loss, it’s going to be a slow process. They have fewer fat stores, which the body wants to protect. Evolution has programmed our bodies to preserve fat in the case of famine.

A 2005 article in the Journal of Theoretical Biology explains that not only does metabolism slow down the leaner a person gets, but that fat also becomes a less favourable source of fuel to be burned. In other words, you could be losing weight that is not fat, like muscle, and that’s bad.

A closer look at the numbers
Let’s talk about caloric deficits, because that’s what leads to weight loss. To start, it’s important to note that a single pound of fat contains 3,500 calories (more or less).

If we look at a hypothetical woman who is 40 years old, 5 foot 6, 190 pounds and doesn’t exercise, her BMI would be just into the “obese” range.

If her daily energy expenditure (the amount of calories she burns) is 1,900 calories, she could cut her intake to 1,400 calories per day and create a daily deficit of 500 calories. Over the course of a week, this would create a 3,500 calorie deficit meaning, through diet alone, she would lose one pound per week.

Now, let’s add in some exercise, because exercise is awesome. For her to burn 500 extra calories per day she’d need to run at 10 km/h (which is a pretty average pace) for about 50 minutes. If she does this seven days a week, that’s another pound lost each week.

Where things get trickier . . .
It’s important to note that as you lose weight, your metabolism slows down, so it’s tough to keep this rate of weight loss up as you get closer to your goal.

Fourteen hundred calories per day isn’t a lot to take in however. Any fewer calories and you’re at risk of causing a metabolic slow down and creating post-starvation hyperphagia, which is a feeling of uncontrollable hunger causing you to overeat (and so the yo-yo diet starts . . .). What’s more, running at 10 km/h for 50 minutes, seven days a week is a lot of exercise.

This all puts rapid fat loss into perspective, doesn’t it?

The right approach
The most rational (and successful) weight loss rate is one to two pounds per week.

A four-year study of 5,145 obese men and women with type 2 diabetes, published in Obesity, found that those, ” . . . who maintained [weight] loss, compared with those who did not, attended more treatment sessions and reported more favourable physical activity and food intake at year four.” Meaning those who followed the plan long term ate better, exercised more regularly and were better able to maintain weight loss long term.

The average weight for the women in the study was 209 pounds. After four years, almost a quarter of the participants maintained a weight loss greater than 10 percent of their initial weight, while the most aggressive losers lost about 15 percent of their starting body weight in year one. For the women this meant an average of 31 pounds in a year — just over half a pound a week!

As you can see, how fast you lose weight depends a lot on where you’re starting from. But looking at these studies puts my recommendations for weight loss between half a pound and a single pound per week.

I’ve often extolled the virtues of loving the journey when it comes to weight loss by enjoying the act of exercise and eating healthfully. So if you can adopt that mindset, the time it takes to reach your goal will fly by.

James S. Fell, MBA, is a certified strength and conditioning specialist with the National Strength and Conditioning Association. He writes for the Chicago Tribune and the Los Angeles Times. Fell is also the senior fitness columnist for AskMen.com. Based in Calgary, he is an avid runner, cyclist and weightlifter, and wishes he had more opportunities to go downhill skiing with his wife and two children. You can look for his first book out in early 2014. Visit his site for a free metabolism report.