Celery is often an afterthought, but it's time to give this nutritional veggie a starring role — it's packed with phytonutrients! Try it out in this delicious spring salad. 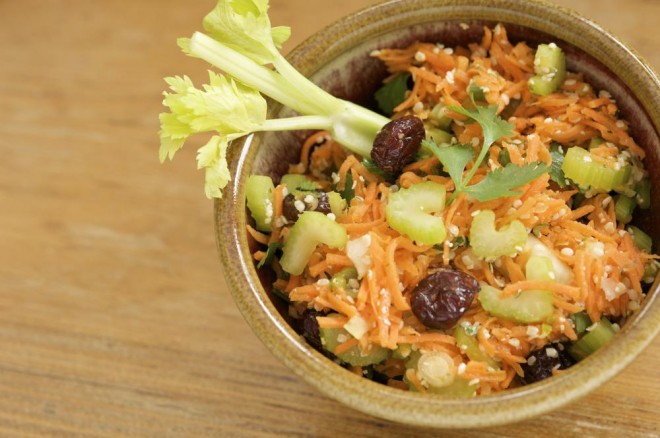 Celery is often dismissed as an “empty” food made mostly of water, but it’s actually a good source of potassium, magnesium, calcium and vitamins A, B, C and K. This often-underlooked veggie’s real selling point, however, is its phytonutrients, which can help keep your heart healthy and may even play a role in preventing cancer. To top that off, celery keeps well and its roots, stalks, leaves and seeds can all be eaten.

1. Preserve brain health: Celery contains a compound called L-3-N-Butylphthalide. A recent study showed that this compound may prevent the accumulation of the brain plaques and tangles that cause of Alzheimer’s disease.

2. Prevent urinary tract infections: Because of its diuretic properties — also thanks to the L-3-N-Butylphthalide compound — celery has long been used as a traditional medicine in places like Trinidad and Tobago to treat UTIs. Celery helps you expel water from your body without also losing a lot of potassium. Due to this diuretic effect, watch your consumption of celery if you are currently on blood-pressure medication.

3. Repel mosquitoes naturally: This traditional remedy has gone through extensive testing, both in the laboratory setting and in the field, and the results remained consistent. The oil extracted from celery repels all species of mosquitoes tested when used topically on the skin, with no negative side effects.

4. Keep your blood pressure down: Celery contains compounds called phthalides, which have a two-fold effect on lowering blood pressure. These phthalides relax the smooth muscle surrounding the arterial walls, cutting the work your heart does to pump blood throughout your body. Phthalides also decrease the production of stress hormones, reducing symptoms of hypertension.

5. Boost your man’s fertility: Celery oil has been shown, in combination with vitamin E, to boost sperm count and motility. Celery contains aldosterone, a metabolic product of testosterone, and vitamin E reduces oxidization, creating the best possible environment for the sperm to mature.

Directions:
1.    Scrub and grate or chop veggies, then add to a large mixing bowl.
2.    Add the cranberries and hemp seed to the mix.
3.    In a jar with a tight-fitting lid, combine oil, lemon juice, sea salt, and cinnamon and shake.
4.    Toss gently over salad.
Makes 8 side servings.

Nutritionist Julie Daniluk hosts the Healthy Gourmet, a reality cooking show that looks at the ongoing battle between taste and nutrition. Her soon-to-be-published first book, Meals That Heal Inflammation, advises on allergy-free foods that both taste great and assist the body in the healing process.