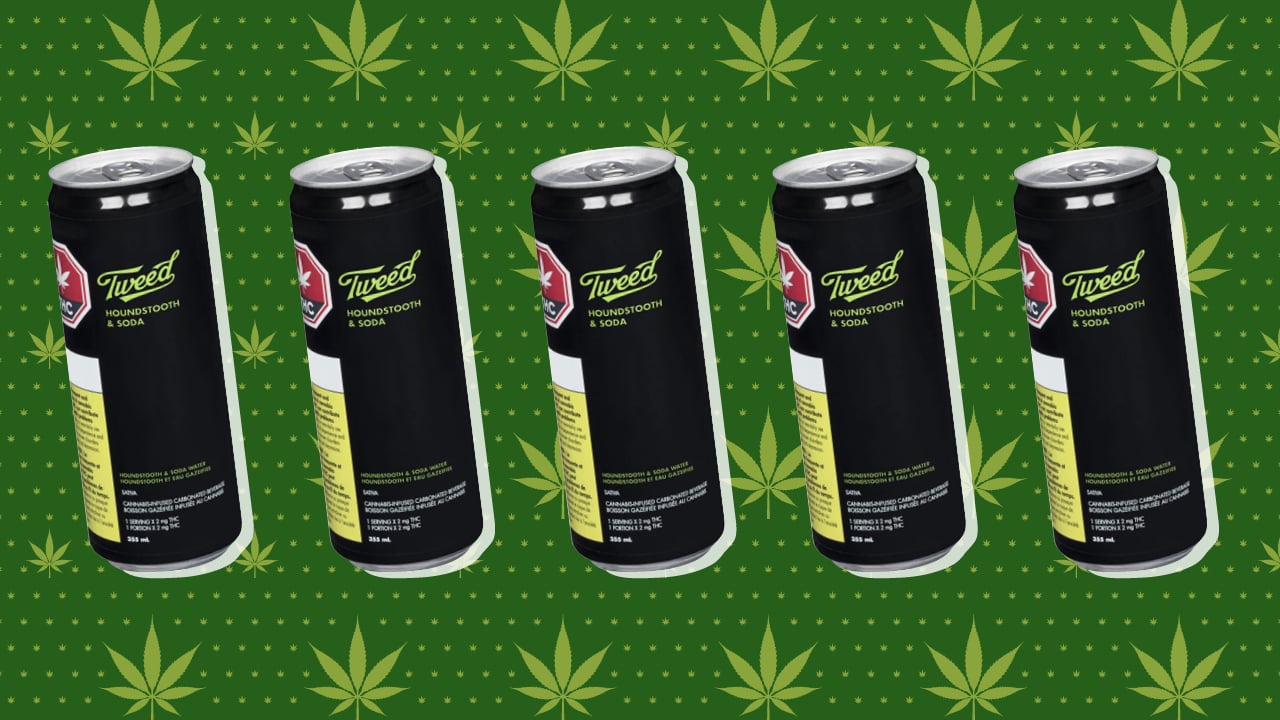 Edible cannabis products were legalized in October 2019, but it’s been a long road to bring them to market. Between the extensive government approval process and product formulation delays, legalization 2.0 hasn’t been without its challenges. But as of late April, cannabis beverages started appearing on provincial cannabis sites across Canada. I’ve waited a long time to try them, and now was finally my chance.

I rarely drink alcohol, but I am a casual cannabis user. In social situations where alcohol is present, I’m the person drinking mocktails, or at the very least, eating an edible cannabis cookie. I was excited to try weed beverages because they’d offer me an alternative. Lift & Co., a Canadian cannabis resource site, says that edibles can take anywhere from 30 minutes to 4 hours to kick in, and last for up to 12 hours. One of the appealing features of cannabis drinks for me is that their formulation mimics the effects of alcohol—including rapid onset time and duration of effects. (I no longer have to wait up to four hours, and worry about potentially being high for 12 hours? Yes, please!)

A quick browse on the Ontario Cannabis Store website showed limited available brands, but there was at least one drink each that contained sativa-dominant THC, indica-dominant THC and CBD. Tetrahydrocannabinol, commonly referred to as THC, is one of the two most abundant chemical compounds found in cannabis plants. THC provides the impairing “high” associated with cannabis consumption, while its sister compound, cannabidiol (CBD), is non-intoxicating and believed to help with relaxation and stress relief, and potentially acts as an anti-inflammatory.

Sativa- and indica-dominance refers to the type of cannabis plant used in the beverage, and the consumption of each can influence your physiological effects and energy levels differently. Sativa strains are known for their uplifting effects, and can increase productivity, so they’re recommended for daytime use. Indica strains tend to decrease your energy and promote relaxation or sleep and are best for use in the evenings or at night. (There are also hybrids/blends, which are a combination of both plants.)

And remember: always buy cannabis products from licensed producers through legal provincial sites and retailers. Cannabis products from licensed producers are required by law to have their cannabinoid levels tested, analyzed and labelled on the package. This offers you an accurate measuring stick to test your dosage tolerance (think of it as alcohol percentages, but in cannabis terms). As with any cannabis product, always start low and go slow to figure out what dosage works for you. 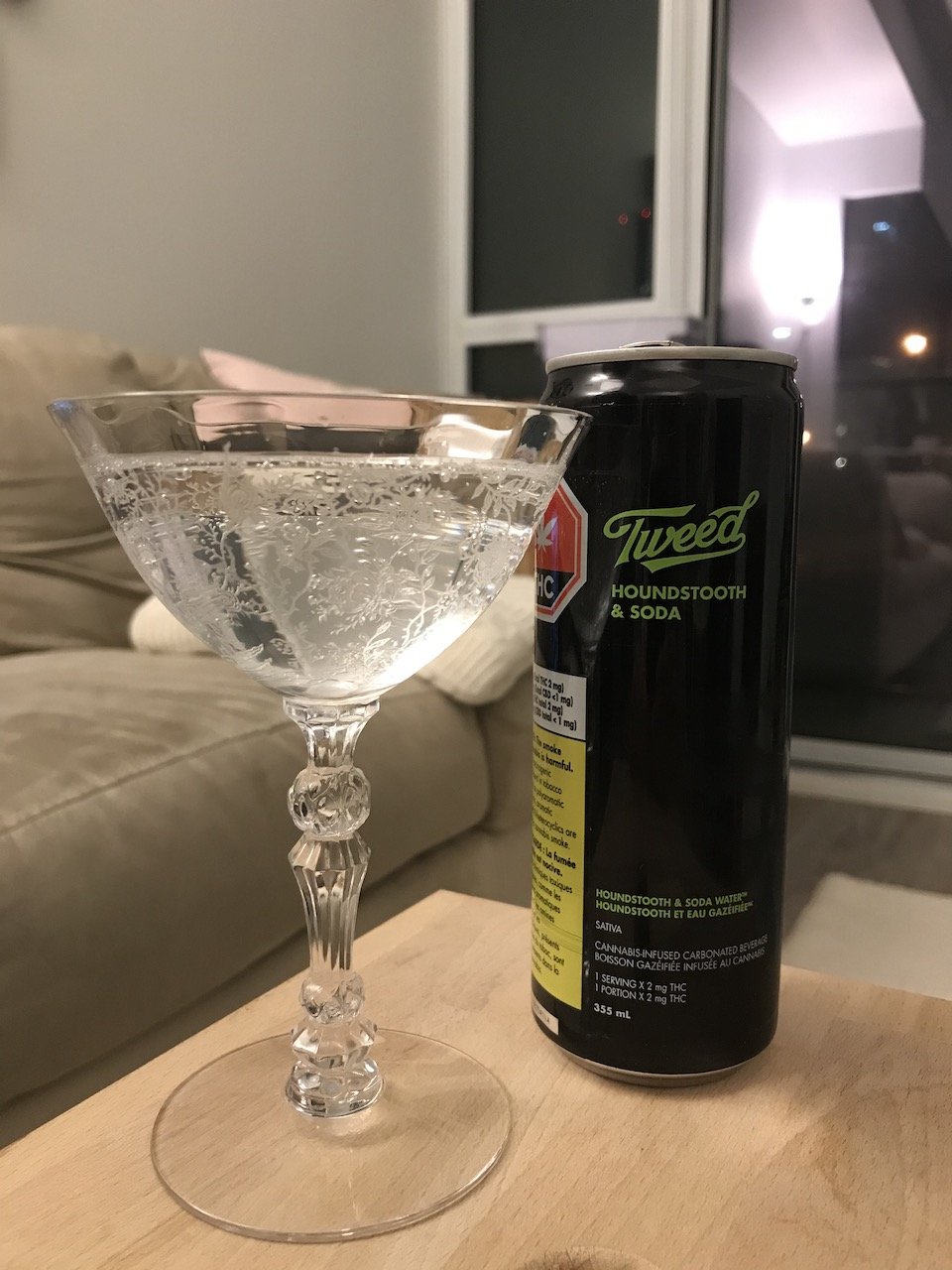 For my first tasting, I cracked open a can of Tweed’s Houndstooth & Soda to spice up a Zoom group party. Each can comes in a 355-mL format, and contains 2 mg of THC. This drink is clearly a cannabis twist on the vodka soda. Houndstooth actually refers to the cannabis strain used in the beverage; it’s a sativa-dominant strain, which tells me it won’t be a drink that lulls me to sleep–perfect for social events (even virtual ones). At $3.95 per can, the cost is on par with a can of beer or cider.

The Houndstooth is lightly carbonated, and the taste by itself is fairly neutral, with a slight cannabis and citrusy lemongrass flavour. The flavour comes from terpenes, oils found in the cannabis plants responsible for the aroma and flavours of the strain. It tastes like how I imagine an unsweetened tonic might taste. I drank this as-is, but you could easily add a squeeze of lime or lemon, or mix it with juice.

Tweed says their drinks have an onset time of 30 minutes to two hours. I started feeling the effects in half an hour, about midway through one can, and could feel myself relaxing. As I started a second can, I definitely felt tipsy. I was genuinely surprised at how similar it felt to drinking alcohol. (I also had friends try the drink, and their onset times ranged from 20-30 minutes.)

After two cans, the effects really started to compound. I felt sufficiently buzzed, but not in a bad or anxiety-provoking way. My eyelids felt heavy, but I was alert, social, happy and laughed a lot. What was interesting for me is that this drink gave me more of a head high, but not a body buzz, which is a pretty standard characteristic with edibles. I was also very pleased that I didn’t feel warm or flushed, as I normally do when drinking alcohol. The physiological effects are actually more similar to vaping or smoking a joint. By the time I headed to bed around two hours later, I was still feeling a bit of a buzz, but had no problem falling asleep for eight hours straight. I did wake up with a slight cannabis hangover from the two cans (4 mg THC total)–feeling sluggish and drowsy, but nowhere near as unpleasant as I feel personally from an alcohol hangover. It didn’t hinder my productivity at all and I was able to get on with my day easily. A friend (a previous non-cannabis user) commented the day after drinking the soda that she “got way less groggy in the morning than from drinking wine.” And for about $8 and a 4 hour+ buzz, I found the price point–as the same friend exclaimed–“very economical!” (Editor’s note: a subsequent night of drinking just one 2 mg can yielded a nice buzz and no hangover.)

Best for: Socializing. (Even online.) 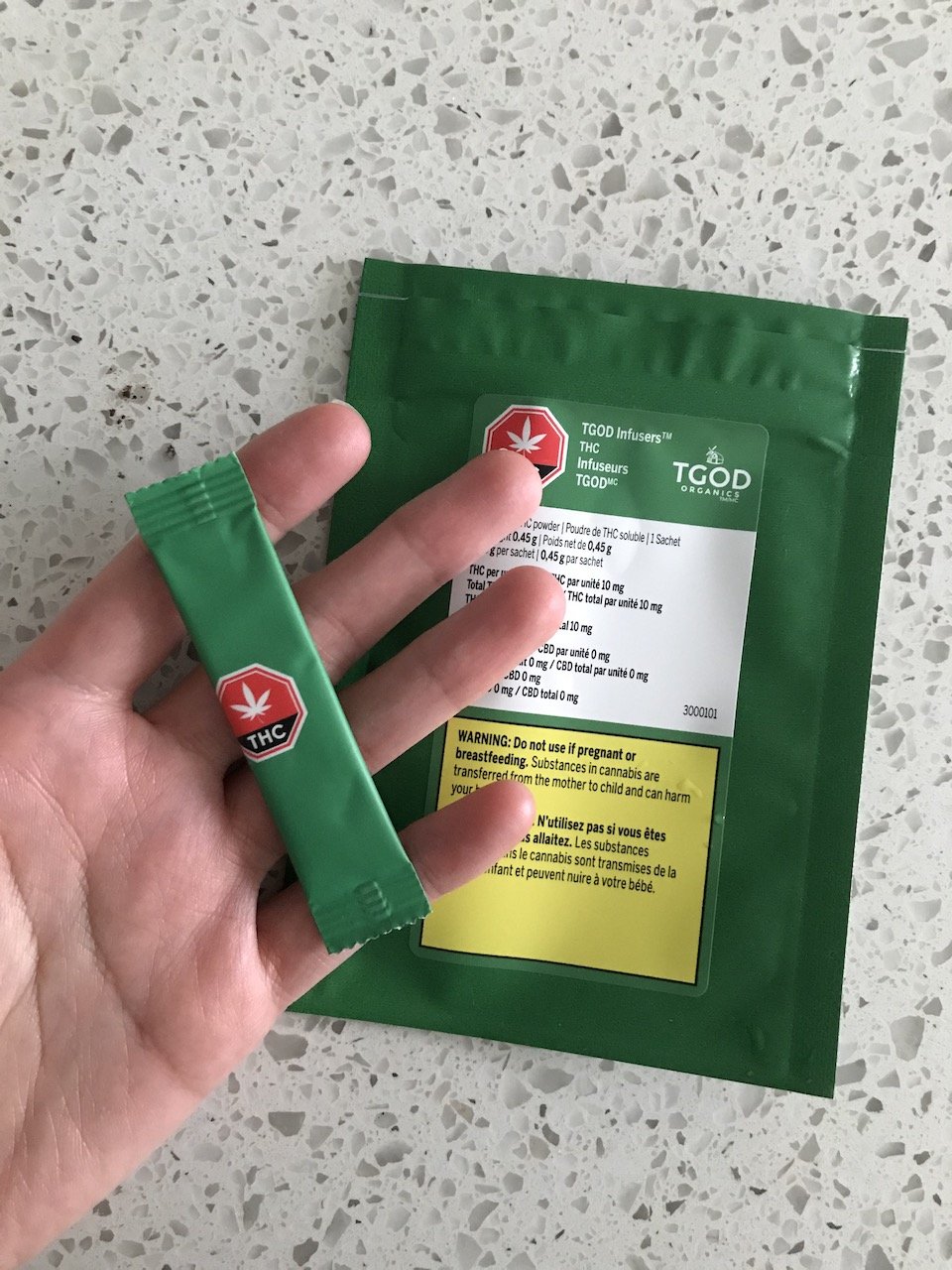 For my second tasting, I decided to try a dissolvable THC powder. The benefit of using a powder is that you can add it to any beverage you like. Each TGOD packet  contains a single-serve packet of odourless, flavourless and calorie-free 10 mg THC water-soluble drink crystals–about ⅛ tsp worth. At $7.80 per pack, this was the most economical option as 1 mg THC costs $0.78.

Generally, I consume cannabis to feel relaxed, and not to get inebriated. Because I know my personal tolerance level now, I decided only to consume 2 mg (half the THC quantity of my first test). I stirred the packet into 5 cups of homemade lemonade as my mixer, and drank 1 cup. The powder on its own tastes strongly of cannabis and sugar, but the flavour was undetectable when I mixed into the lemonade. (Avoid doing this with cannabis oils, which are best used for cooking or baking.)

As I started drinking, I settled in to watch some Netflix. TGOD suggests that their product onset time is 15 minutes. As with the Houndstooth, it took about half an hour for me to start feeling the effects, and it was also less obvious this time (I had to ask myself several times–“am I feeling anything yet?”). Whereas the sativa-dominant Houndstooth gave me an identifiable energy lift, this indica-dominant drink gave me the opposite effect.

It started with my head feeling just a little bit woozy, similar what happens with alcohol. The full effects hit me in about an hour. I didn’t experience a body buzz or warm flushes, but my eyelids felt heavy. However, I was able to stay awake and I found that I started focusing on my Netflix show more, and didn’t think about anything else. It was almost meditative. The effects wore off in about three hours, though I imagine if you consumed more than 2 mg THC, your high may last longer (and the psychoactive effects would be much stronger). With my reduced THC consumption, I also woke up the next morning without any ill effects.

After two taste tests, consider me impressed. Cannabis beverages seem to combine the best elements of edibles and vapes/joints. Quick onset times, an acceptable duration of intoxication, and lack of smoking are all appealing features for someone looking for alternatives to alcohol and other forms of cannabis consumption.

Best for: Being a couch potato. Watching Netflix. An after dinner nightcap. Possibly a sleep aid. (If you prefer a ready-to-drink version, Tweed has also released an 2 mg indica-dominant Bakerstreet and Ginger beverage that offer a similar effect.) 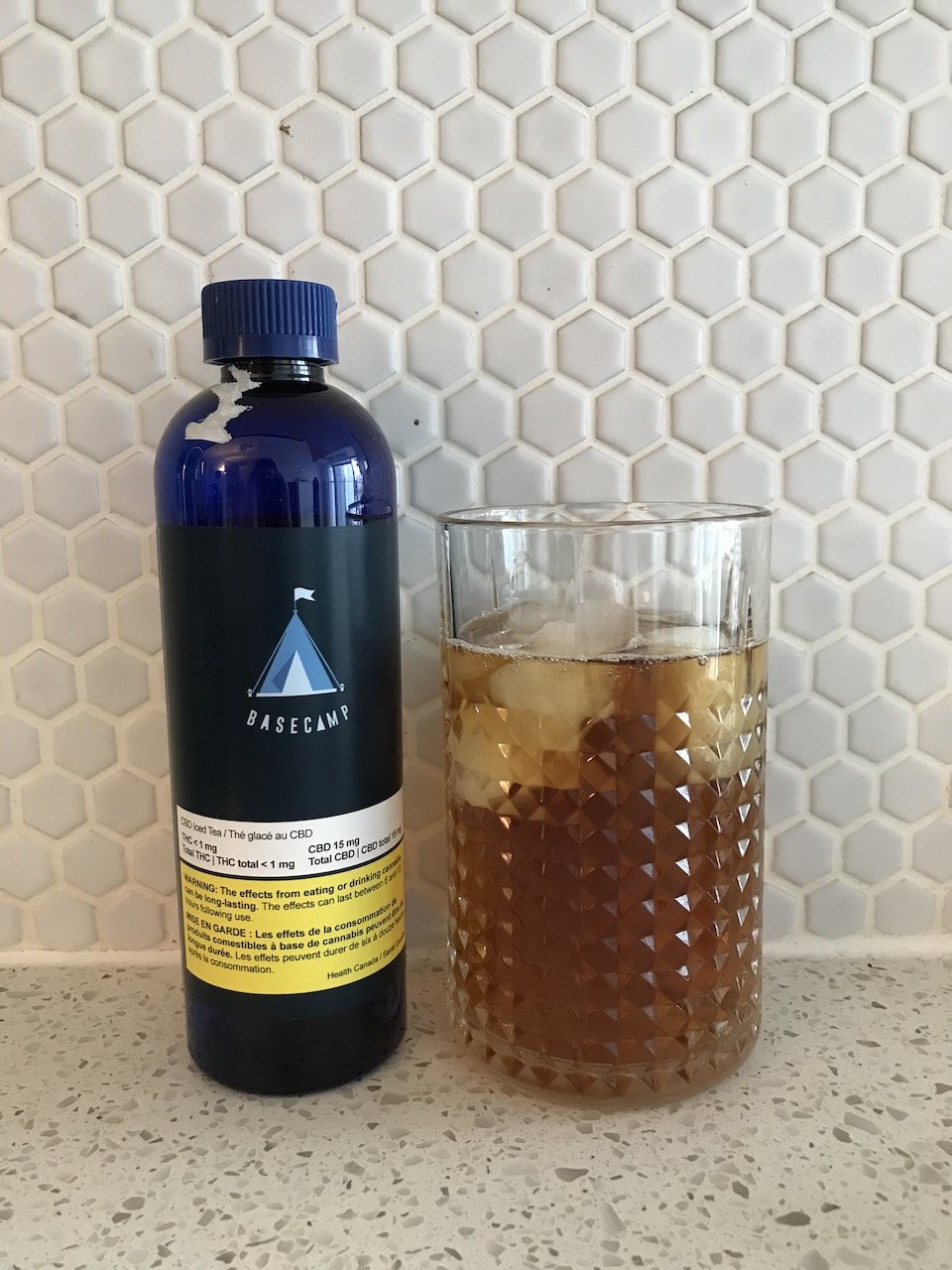 I knew this beverage would be harder to review because CBD is non-intoxicating. It’s more about what you don’t feel, versus what you do. Think of it like a vitamin or painkiller–it works in a counteractive way to relax and/or reduce a symptom.

While CBD itself isn’t intoxicating, it’s important to note that a lot of CBD products contain small amounts of THC. To be safe, you should avoid cognitive tasks, like driving, when using it. (Check out our cannabis guide for more information on CBD.)

Some early research suggests that CBD could have an anti-inflammatory analgesic effect at high doses, so when I woke up one Sunday morning with a headache, I decided there was no better time to put the Basecamp iced tea to the test.

First impression: I found it counterintuitive to mix CBD with a caffeinated drink. One would assume that if you want to feel relaxed, you wouldn’t drink something meant to energize you. I also didn’t know whether 15 mg of CBD was considered a high-enough dose to have an analgesic effect on my headache. The beverage comes in a 355-mL plastic bottle, and the beverage producer, A1 Cannabis Co. claims the beverage has zero THC (suggesting that the CBD may be derived from hemp). The iced tea is unsweetened, but very refreshing (especially cold), with a touch of lemon flavour and no cannabis taste. It’s something I could imagine myself drinking on a patio or dock in the summer.

To my surprise, I found that my headache was gone about 20 minutes after I twisted off the cap. About 10 to 15 minutes later, I felt what I can describe as “refreshed” (although that could have been the caffeine kicking in, too.) CBD is meant to promote a sense of well-being and focus, and I would say it did just that.

With CBD, it’s almost impossible to tell whether something is working or if it’s just a placebo effect, so I would need to try this again as a pain reliever to really see if there is a real analgesic correlation. But at $8.60 a bottle, it’s a very expensive alternative to Advil.

Best for: Relaxation without intoxication—but if you’re sensitive to caffeine, enjoy it during the daytime. (And if you prefer a non-caffeinated beverage, consider this sweetened Lemon & Lime 10 mg CBD Sparkling Water from Everie.)