The tomato dish that’s reported to have caused a feta shortage in Finland. 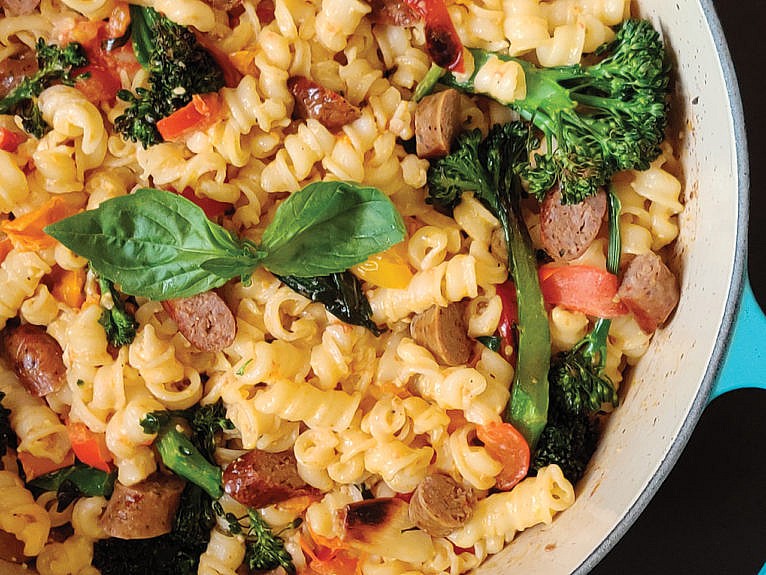 First, it was Dalgona coffee, then it was mini pancake cereal, but it wasn’t until I started seeing the same dish of roasted tomatoes pop up all over Facebook that I wondered about its legitimacy. Does it work? Is it actually delicious?

The phenomenon in question is an almost foolproof recipe for baked feta pasta that’s exploded across the video-sharing platform TikTok.

Known as UuniFetaPasta—Finnish for oven-baked feta pasta—the recipe caused such a sensation that it’s purported to have caused a feta shortage in the country. However, this isn’t the low-effort noodle dish’s first crack at fame.

The recipe originated from Finnish food blogger Tiiu Piret, who posted a version back in 2018; it went viral when fellow blogger, Jenni Häyrinen, shared hers a year later.

It went viral again earlier this year, when chef-author MacKenzie Smith (@grilledcheesesocial) posted her iteration on TikTok (although she blogged about it in 2019). And then came TikTok user Yumna Jawad (@Feelgoodfoodie)’s version. In a 25-second video, she showed 1.2-million viewers and counting how a creamy, hearty pasta dish can appear from a simple block of feta cheese that’s baked with a sea of olive oil-slicked grape tomatoes. But she didn’t stop there. A few days later, she came back with a take that could be made faster when cooked in a pan and followed up with another that replaced feta with goat’s milk cheese. Then there was a low-carb rendition with spaghetti squash, another that eliminated tomatoes altogether, and still another that used strawberries.

There are countless other versions swirling around the internet, most indicating that the recipe lends itself well to customization. There’s Spicy Szechuan Feta Pasta that’s whipped up by Detroit chef Jonathan Kung. Popular food bloggers like Smitten Kitchen have jumped on the bandwagon (her version includes chickpeas). Even New York Times food reporter and cookbook author Melissa Clark joined the party. What I could glean from the many riffs was how the dish always turned out—as long as the general structure is kept. More on that below. 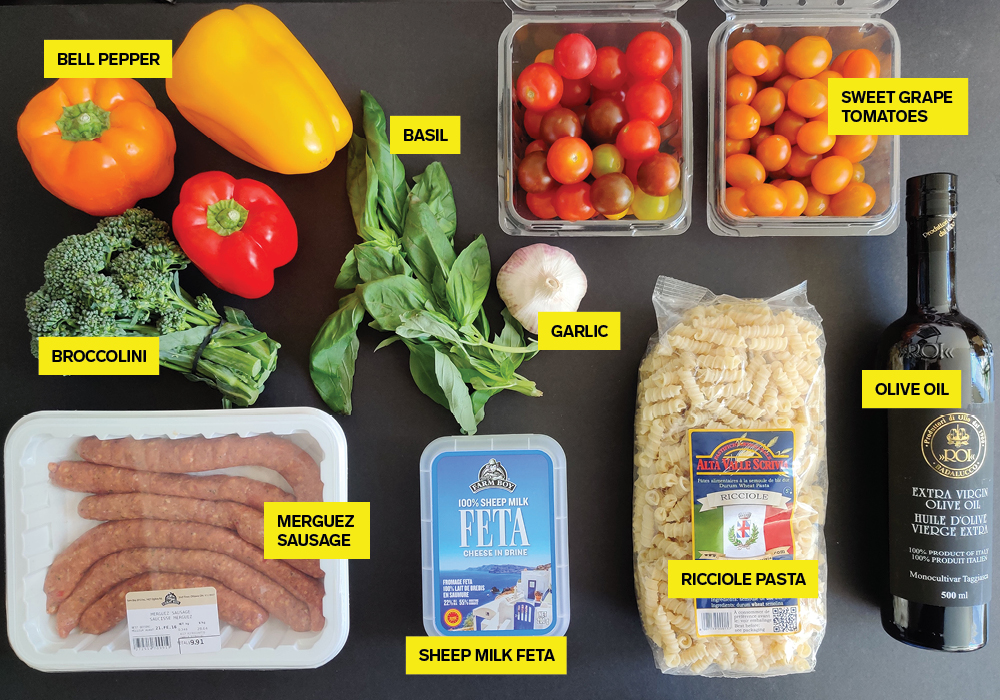 As a fuss-free meal that doesn’t take much time or effort to prepare, this one-pan wonder is comprised of these easy-to-find supermarket components: pasta, a block of cheese that melts when baked in the oven, olive oil, cherry or grape tomatoes (or a similar sweet and juicy vegetable that softens as it cooks), plus herbs and seasonings. That’s it. 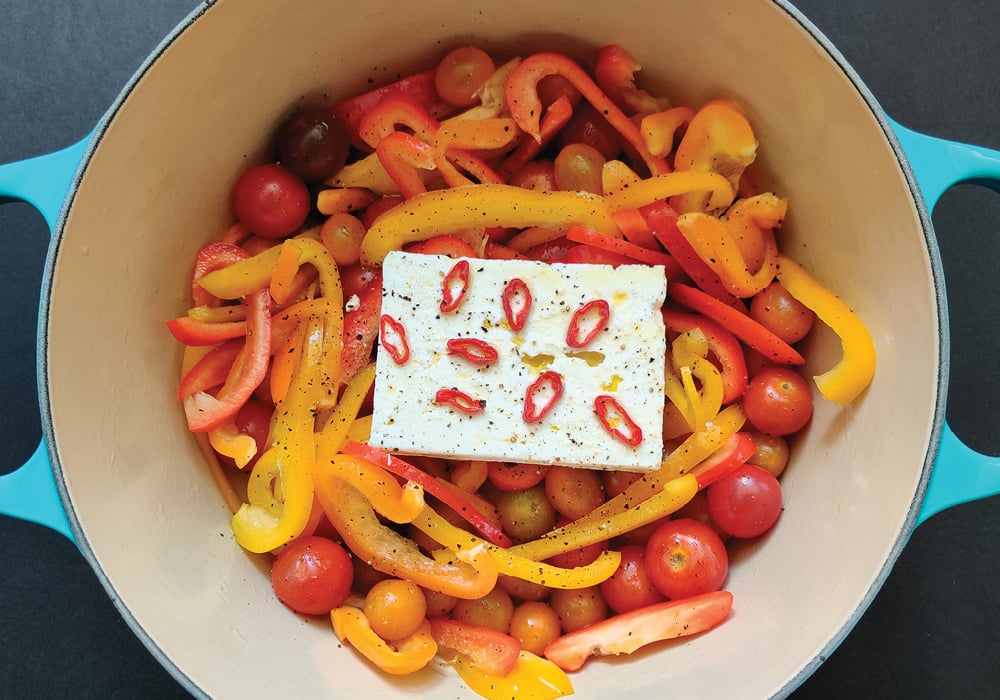 The cooking method is pretty straightforward too. In an oven-safe baking dish, toss the tomatoes and/or other vegetables (Häyrinen has used asparagus) with olive oil, salt and pepper. Place a full block of feta cheese (approximately 200 grams) in the centre of the dish, also coating it with olive oil and seasoning. Bake everything in the oven at 400°F/200°C for 15 minutes, then turn the heat up to 440°F/225°C until the tomatoes start to burst and the feta appears golden and melted—about 10 minutes, or when you can smell the cooked dish. (There’s an option to add a final broil to finish, if you’re feeling brave enough not to burn it.) 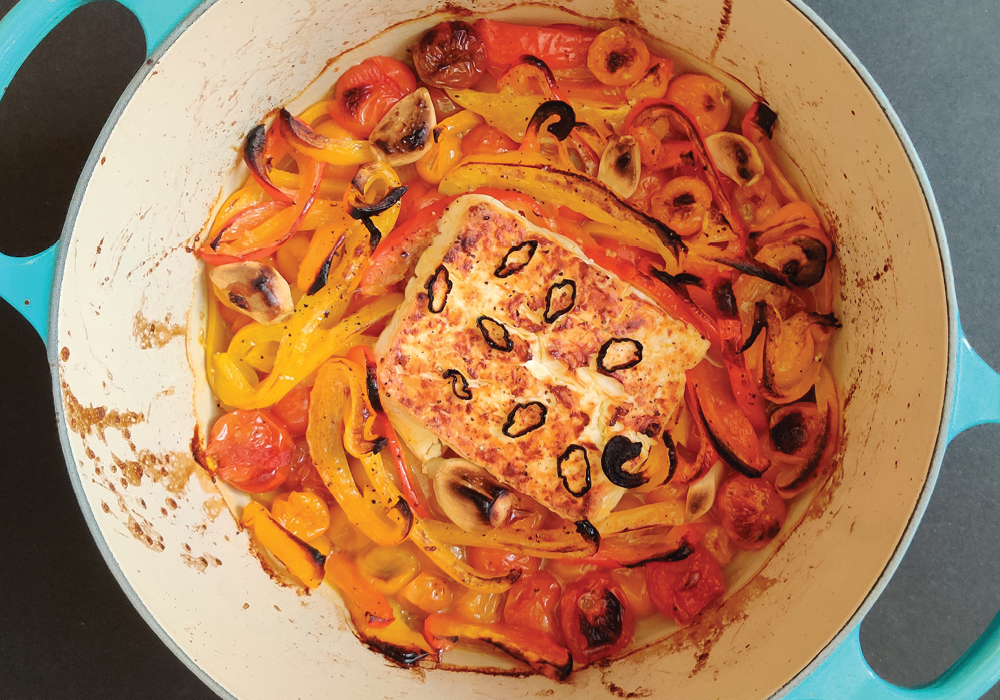 While the cheese and tomatoes are in the oven, cook the pasta until al dente in well-seasoned water according to package instructions, saving half a cup of the pasta water when the cooked pasta is drained. When the baked feta and vegetables are ready, take the dish out of the oven, remove any stems or tough herb stalks, then mash the feta with the cooked tomatoes, and, if using, other soft roasted vegetables and/or garlic. Add the drained pasta and delicate leafy herbs to the vegetable-cheese mixture and gently stir everything together. If the pasta looks dry, add some of the pasta water to create more sauce. Serve the pasta straight out of the baking dish and enjoy. 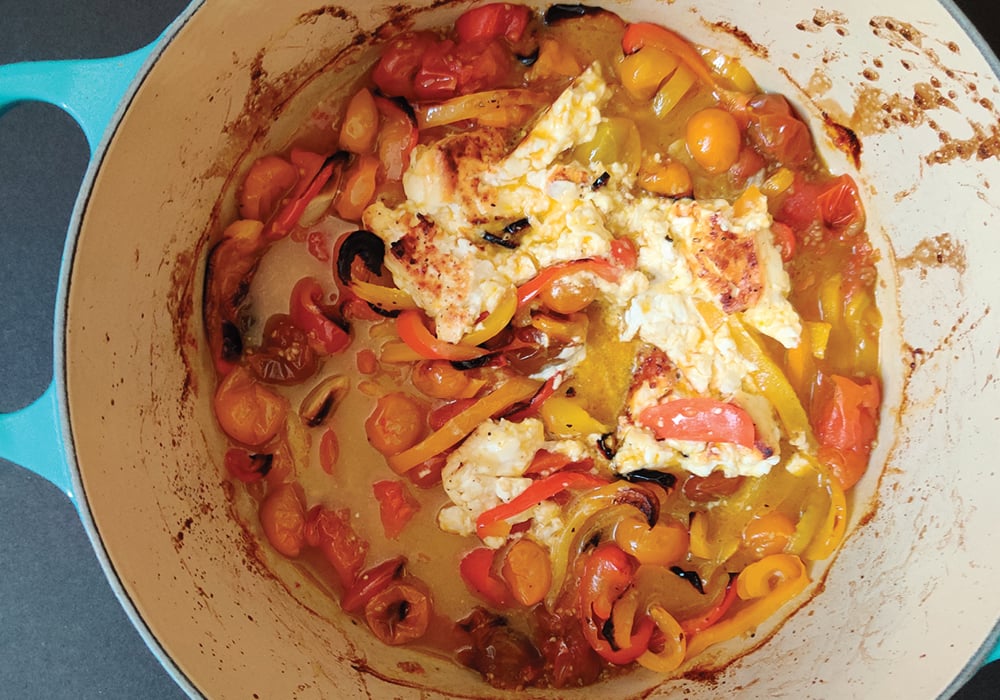 How did the pasta taste?

Having succumbed to the TikTok pasta’s siren call before me, Aimee Nishitoba, Chatelaine’s associate art director, was kind enough to share her feedback. Following the basic recipe, Nishitoba found the dish salty, noting that she used a cow and sheep’s milk feta, also added a head of garlic and seasoned with dried herbs. In hindsight, she thought the dish would probably benefit from having more vegetables in it, and protein, like chicken.

Armed with these insights, I conjure up my own feta pasta using Häyrinen’s recipe as a guideline.

The first issue to tackle was the saltiness. I’ve never cooked feta in a dish before, but had frequently employed it in salads or as a topping. Of all the varieties of feta available, I learn that most grocery stores carry Greek-style feta that’s made with cow’s milk, which tends to have a drier texture and milder flavour than true Greek feta (made from sheep’s milk). I use the latter. I also learned that feta blocks stored in brine are better for melting than those wrapped in plastic. However, that brine is also the main culprit behind feta’s saltiness. To decrease the salt content, either rinse or soak the block of feta in water for a few minutes before use. Or use a lower sodium option like ricotta, goat or even cream cheese (which some online users have done).

The use of cherry tomatoes—or any tomatoes—also gave me pause given the time of year. I rectified this when I was at the grocery store by picking up sweet grape tomatoes (Sun Bliss and a mix of heirloom cherry tomatoes) plus a few sweet bell peppers. For aromatics, I included a head of garlic (peeled), fresh chilli pepper, and a bunch of fresh basil.

Certain that the dish would lean more on the soft side–it’s softened cheese, roasted vegetables, and cooked pasta, after all–I added grilled broccolini for colour and textural contrast (I felt roasting it would result in the same softened texture as the sweet peppers and tomatoes, so I grilled it separately). In my mind, having something slightly crunchy and charred would give substance to the dish (rapini or broccoli would also work). For protein, I went with merguez, feeling that the richer flavour and spice of the sausage would add depth to the pasta (it’s tasty and was an unexpected find in the meat aisle). 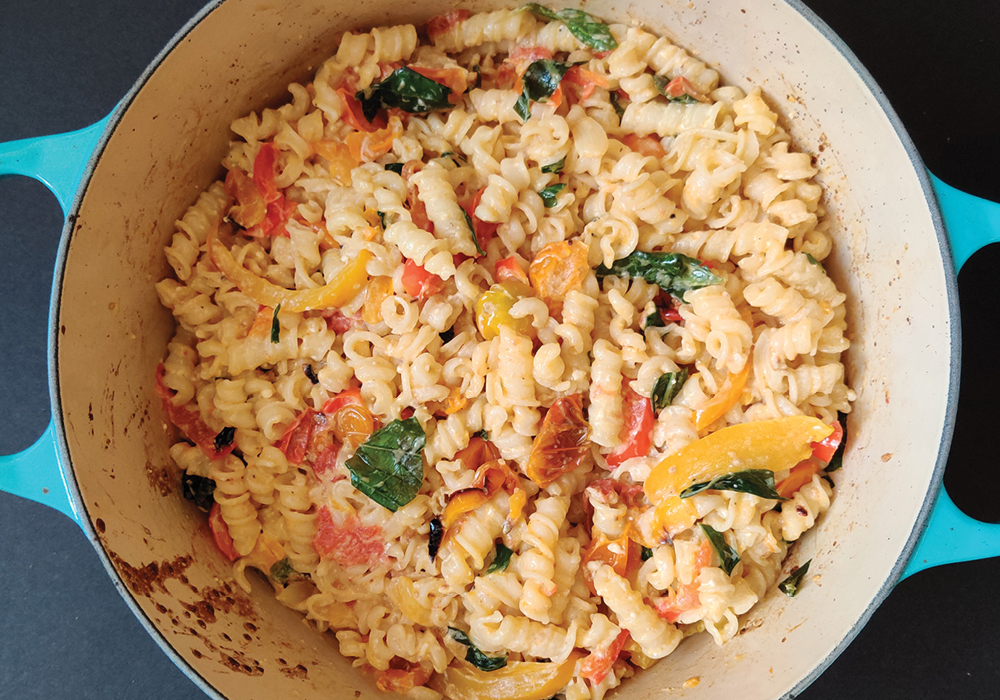 For pasta, I went with ricciole–a short, curly pasta from Liguria–because it’s blessed with grooves that would catch the fresh vegetable and cheese sauce. Also, because I enjoy pasta with fun shapes and interesting textures. (I’m all about the simple joys in life.)

So that was it. After generous glugs of olive oil and a little time in the kitchen, the nearly hands-off dish became a creamy comforting pot of tangy pasta within 30 minutes. While it had the richness of a cream sauce, the result was much lighter, naturally salted by the feta, and rounded out with the sweetness and moisture contributed by the silky roasted vegetables. I tried the pasta before and after the addition of broccolini and Merguez. While the pepper and fresh basil gave the dish a lift, it was the blistered broccolini and flavourful Merguez that salvaged a generally tasty but otherwise monotonous pile of carbs. 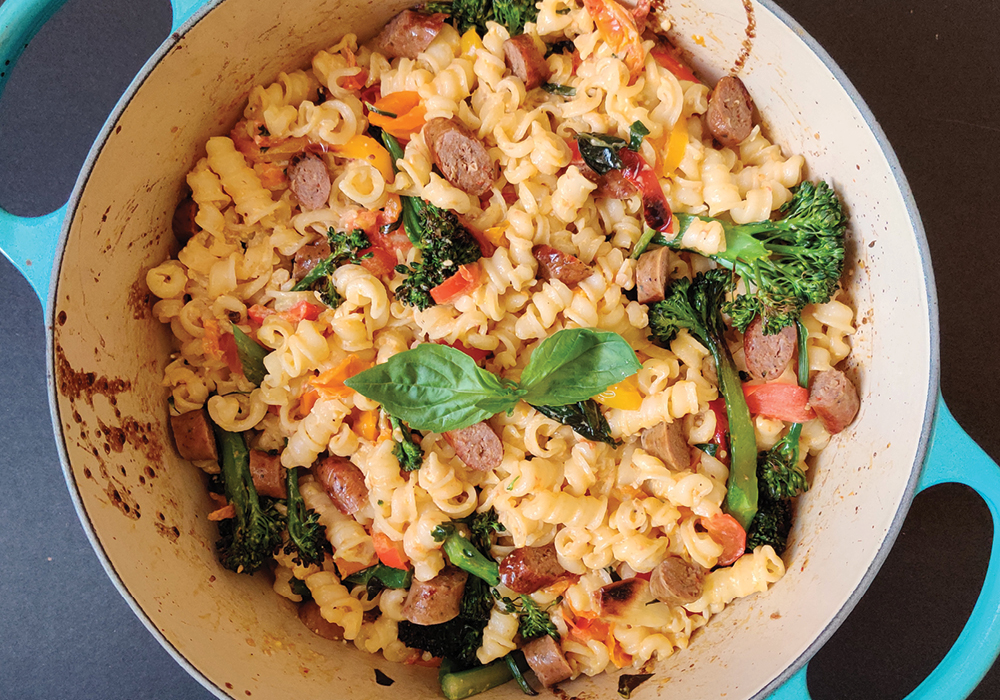 While it wasn’t the source of any culinary epiphanies, the recipe is a handy one to have in your arsenal as a fast everyday meal or a starchy side for dinner parties (when we can have them again). It’s even fine eaten straight from the fridge the next day as a sort-of cold pasta salad thanks to the tang from the cheese and flavourful vegetables. 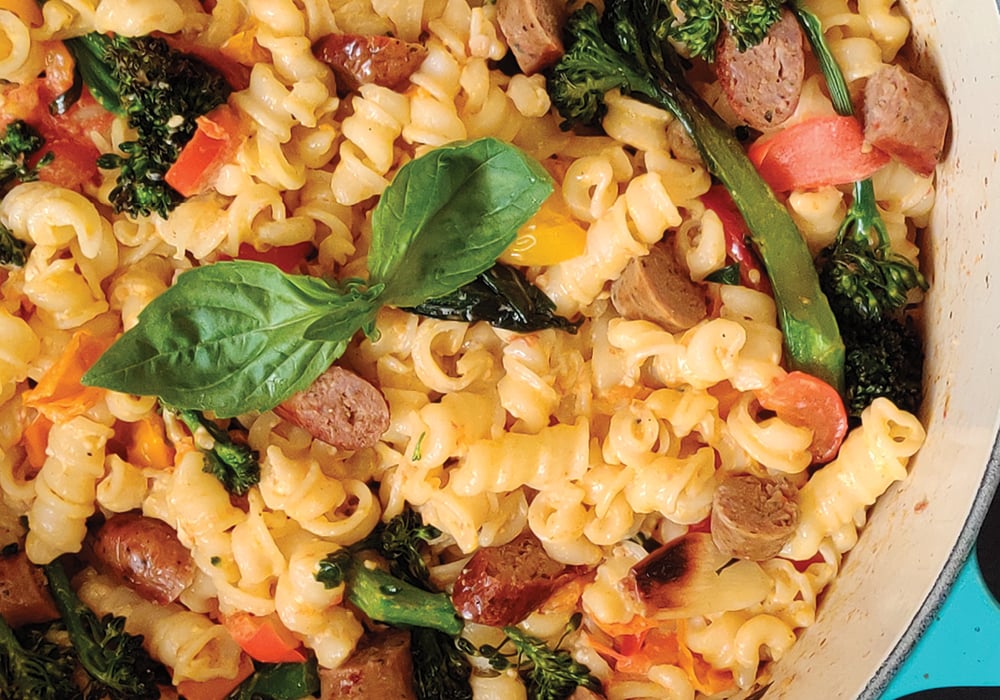 Easy-to-assemble and vegetarian-friendly, I can see this technique being useful if I find myself with an abundance of fresh produce that’s wilting and needing to be used up. Move over pureed vegetable soup, there’s a new clean-out-the-fridge meal in town.