Red-curry-peanut noodles: Easy dinner for back to school

As I prepared (both emotionally and logistically) for mini sous chef’s first foray into the JK world, I decided a little meal planning might help avoid the 'back-to-school' dinnertime drama. So I pulled out Chatelaine’s Dinner in 30 cookbook and picked a few recipes, starting with Red-curry-peanut noodles 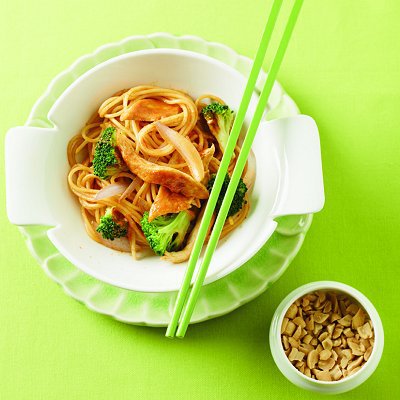 As I prepared (both emotionally and logistically) for mini sous chef’s first foray into the JK world, I decided a little meal planning might help avoid the ‘back-to-school’ dinnertime drama. So I pulled out Chatelaine’s Dinner in 30 cookbook and picked a few recipes, starting with Red-curry-peanut noodles.

This recipe appealed for a few reasons: One, it has peanut butter in it (the natural kind — even better) and both mini sous chef and chef in training have been known to go through a jar in a week (they eat it by the spoonful); two, the main veggie is broccoli, a family favourite; and three, from pot to table it only takes 20 minutes.  There are really three steps to this recipe — cook the chicken, cook the pasta, make the sauce. And really, you could cook the chicken ahead of time and use fresh pasta, and you’d cut this recipe down to under 10 minutes (if you’re one of those super planner types)!

While the water boiled for the spaghetti, I cut up the two chicken breasts and one onion, and got the sauce ingredients ready. Once the pasta went in the water I started cooking the chicken and onion in the oil, just until the meat was longer pink.  Then the broccoli florets were added to the pasta water for about a minute before the whole thing was drained — just don’t forget to take a ½ cup of the pasta water for the sauce! I was mid pour when I remembered, but luckily there was still enough water left (the pasta water helps to thicken the sauce). The sauce is a mixture of natural peanut butter, red curry paste, soy sauce, honey, and a bit of water, whisked together. Once the sauce is ready you pour it over the chicken/onion combo and cook for a couple of minutes until the meat is fully cooked. The reserved pasta water is then added, and you cook slightly longer until the sauce thickens.

After that, it’s simply assemble the dish and you’re ready to eat. You toss the noodles and broccoli with the sauce to combine, and serve. Easy! This noodle dish was a HUGE hit, as expected. And despite some heat from the curry paste, it wasn’t what I’d call ‘spicy.’ There were also plenty of leftovers, which chef in training was happy to have for lunch the next day (can’t send with the mini as peanut butter is banned from school lunches due to allergies – I’d also be curious to try this with a soy nut butter instead of the peanut variety).

Have a feeling this meal is going to be requested often…better stock up on peanut butter!