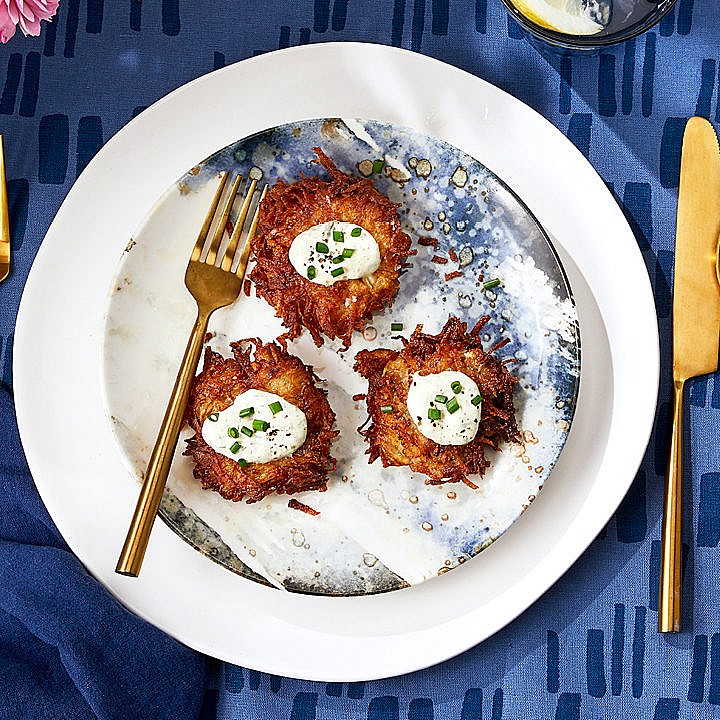 Latkes are traditionally served with applesauce and sour cream, but here I propose a herbaceous green goddess sauce, a play on the sour cream that provides a lot more interest and oomph. It works well with the latkes—and also with everything else on the plate.—Amy Rosen

2. Latkes: Coarsely grate potatoes (no need to peel them) onto a clean tea towel. Squeeze out as much liquid as possible by twisting towel (potato shreds should be as dry as possible). Transfer potatoes to a large bowl and grate onions overtop. Stir in eggs and flour until combined. Season with salt and pepper.

3. Pour enough oil into a large cast iron pan (or any heavy-bottomed pan) until it reaches 1⁄2 in. up the side. Set over medium. When oil is hot, add heaping tablespoonfuls of latke mixture, frying 4 or 5 at a time, until deeply golden-brown, about 3 min per side. Transfer to a paper-towel-lined plate. Repeat with remaining latke mixture, adding more oil as needed.

Kitchen tip: Any extra sauce can be refrigerated in a sealed container for up to 5 days. It’s also great with salmon or as a salad dressing.

Make-ahead tip: Sauce and latkes can be made up to 1 day ahead. Refrigerate, and then reheat latkes, in a 200F oven until hot, when guests arrive.

with our collection here.