Max Fawcett: Before the coronavirus made its way into Canada, Ford was best known for leading a government that could best be described as dumpster-fire adjacent. 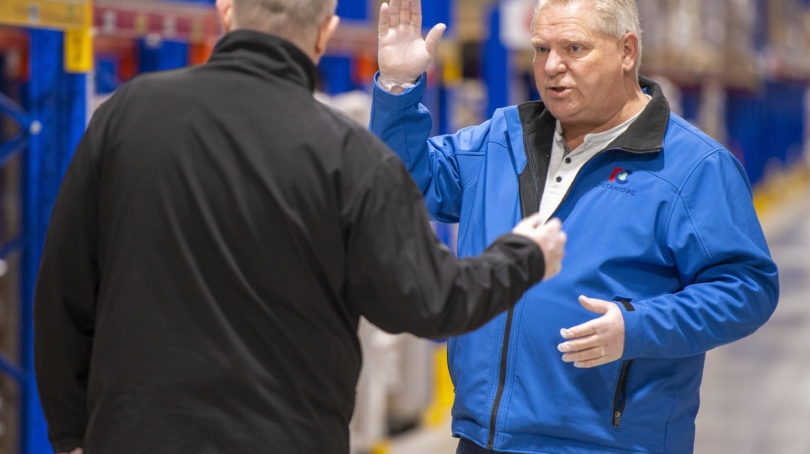 Max Fawcett is a freelance writer and the former editor of Alberta Oil magazine.

The coronavirus pandemic has produced a lot of unexpected outcomes, from Mitt Romney’s embrace of a universal basic income to Britney Spears calling for a general strike and the redistribution of wealth. But few have been more surprising than Doug Ford’s transformation from a carbon-tax hating, license-plate bungling premier into an inspirational national leader. It is, to borrow a term from professional wrestling (an art form that has more in common with politics than some might want to admit), the biggest babyface turn in Canadian political history—and it may well end up saving his political career.

Before the coronavirus made its way into Canada, Ford was best known for leading a government that could best be described as dumpster-fire adjacent. In its first year, Ford’s PC government was defined by a cronyism scandal that involved his former chief of staff and a tone-deaf approach to funding childhood autism therapy that only served to mobilize an army of angry parents against it. Its second year didn’t start much more auspiciously, as his baby-faced education minister picked a fight with the province’s teachers and their union that looked to be headed towards a widespread strike.

Ford’s government may have reached its nadir when it became clear the new blue-on-blue license plates that it had introduced to replace the existing white ones couldn’t be seen at night (no small problem for the province’s police officers, among other people). And remember: Ford’s family made its bones in the label business, an unfortunate irony that his opponents weren’t shy about pointing out.

When the coronavirus first appeared in Canada, and Ford encouraged people to continue with their spring break plans, it looked as though he would make a predictable hash of his province’s response. Then, as if by magic, the combative and error-prone premier was replaced by a different Doug Ford—one who projected an unmistakable air of calm, competence and decency. He praised his federal partners for their work, and made it clear that they were in this together. And when a reporter served up an opportunity on Monday for him to spike the political volleyball back in Ottawa’s court by asking about the imminent increase in the federal carbon tax, he let it drop, instead calling Deputy Prime Minister Chrystia Freeland “an absolute champion.”

That wasn’t all. When Ford, who is famous for fielding phone calls from constituents against the advice of his political staff, got wind that an Ontario medical supply company was donating 90,000 masks to hospitals in the province, he personally drove over to their warehouse in Markham and loaded them onto his truck—and didn’t tell anyone. And while nobody is going to mistake Ford for a fiscal spendthrift, he’s pulled the reins on his government’s effort to cut costs in the public sector. “I gotta protect anyone who is not working, they have mortgages to pay, rent to pay,” he told reporters. “I’m not comfortable with laying provincial frontline people off.”

Jason Kenney, on the other hand, appears more than comfortable with that idea. After all, the Alberta premier signed off on the decision by his education minister to temporarily cut the funding for 25,000 educational assistants and support staff, one that will put them out of jobs and onto the federal government’s unemployment rolls. This is a curious strategy for someone who is still depending on the federal government to bail out his province’s oil and gas sector, and it’s one that sparked howls of outrage within Alberta as well. But Kenney has built his political movement around the anger many Albertans feel towards Ottawa, and he has so far shown no real inclination to change that strategy. Indeed, if the federal government doesn’t come up with a shock-and-awe rescue package for the energy sector, it’s likely that he’ll press this case even harder.

If there’s anything that could change his mind, it might be Doug Ford’s reinvention as a minor national hero. He’s even received glowing praise lately from the Toronto Star, a paper that isn’t exactly in the business of handing out plaudits to Conservative politicians: “In the midst of a crisis, amid shortages and suffering, it is a relief that Ford has struck a tone that speaks to all Ontarians,” columnist Martin Regg Cohn wrote. “Give him credit for being the best premier he can be when his province needs him most.”

This is no guarantee of re-election, of course. Winston Churchill rose to the challenge of the moment during World War II, and was promptly dumped by the British electorate just two months after it ended in 1945. But a government that was careening towards electoral disaster, and polling behind a leaderless Ontario Liberal Party as of January, now has a real chance at winning a second term. Never let it be said that there aren’t second acts in Canadian politics.