My Aunt Died in the Air India Bombing. The Iran Plane Crash Brought Back My Grief

News reports of the Flight 752 crash transported me to 1985, when my Aunty Zeb and Uncle Omar died in a terrorist attack. 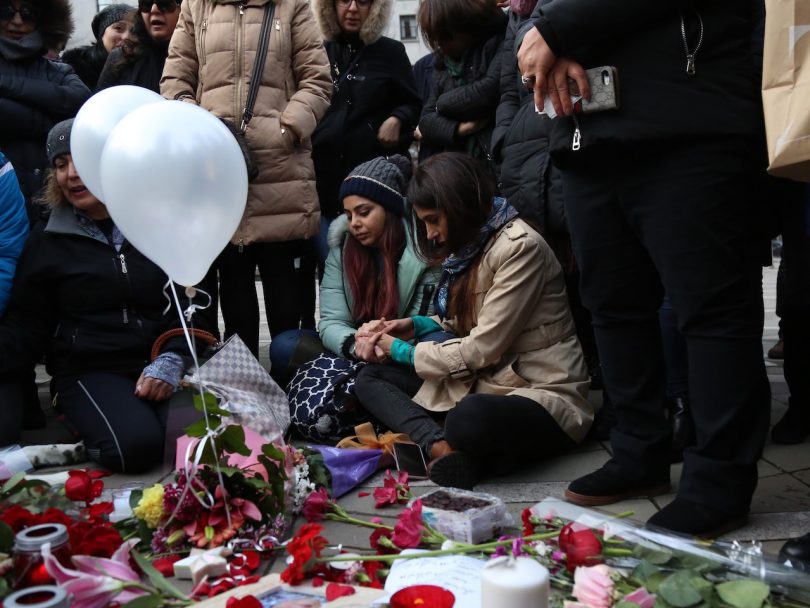 I hate flying and will do anything to avoid air travel. Well-meaning friends often tease me, offering self-help tips: take melatonin, or a red-eye flight so that you can sleep. I nod and smile, but inside, there’s a familiar sinking feeling, the same pit-of-the-stomach contraction that happens whenever images of plane crashes pop up on social media. Like they did on January 8, as the terrible news of the missile strike on Flight 752 began to saturate the media.

One CBC headline stood out, in large white capital letters: “A Canadian Tragedy.” Those words spiked a lightning jag of loss into my gut. They transported me to June 23, 1985, the day of the terrorist bombing of Air India Flight 182, which murdered 329 passengers and crew. The day my Aunty Zeb and Uncle Omar vanished from this planet. It’s a hard day to go back to, and the morning after I learned of the crash that killed 57 Iranian-Canadians, my instinct to look away was in overdrive. At breakfast, my husband shared a few details. I looked down at toast barely eaten, then got up and cleared the dishes.

The Air India bombing, which occurred over the Atlantic near the west coast of Ireland, inescapably altered my family and nearly destroyed my mother. My Aunty Zeb was her youngest sister, a brilliant gynecologist with a passion for helping women and a laugh that would light up a room. She and Uncle Omar were on that plane after their first visit with us in B.C., which then became their last, too. My childhood was full of Aunty Zeb stories, but after the bombing, my mother rarely spoke her name. As I write these words, I think of how the grief of today’s mourners will unfold, in ways perhaps not yet even imaginable.

Over the past week, as more details emerged about Flight 752, the victims’ families released photos of their dead. I viewed them reluctantly–such talent and kindness and aliveness, on faces lost forever. Each click brings more memories, like my family gathered around a phone at our home in New Westminster, to hear a cousin from Toronto tell us “they are all gone.” In 1985, there was only television and newspapers, no iPhones or social media.  As my fingers hovered over electronic images of debris on a field, I remember one photo shown repeatedly back then. It was of an airplane wing partially submerged in ocean waters, the Air India logo barely decipherable.

On January 12, I stood in the rain and snow at a memorial outside the Vancouver Art Gallery, listening to poetry read in Persian, shedding tears at words I couldn’t understand but whose timbre carried an all-too-familiar anguish. I was 22 when I lost my aunty. My own experience with grief suggests that the friends and family of the 176 people who just died can expect a trajectory of many ups and downs. Losing a loved one to such a violent act is a process with a calamitous beginning and no end, like falling down a long dark tunnel, fathomless.


At first, you wake hoping you’ve escaped a nightmare. Each passing hour brings more news, more details, and the reality starts to settle into your bones. How many family representatives, I wonder, are currently on their way to Iran to repatriate their loved ones’ remains? A gruesome and exhausting task. I shudder at all the obstacles now surfacing, as I reflect on the sad journey my late father made from Vancouver to Cork to Mumbai, taking Aunty Zeb’s body to burial. My uncle’s body was never recovered.

For the mourners, the names of the dead will become lifelong companions. Dates on a calendar will become fixed reality points: January 8 will always hurt, as will missed birthdays and anniversaries.  Each person and family will carry their individual triggers­­, those unpredictable moments when grief swipes you sideways, long after most people assume you’ve “moved on.” Grief is unique to each person, and their culture and tradition. It grates to this day when people say, with the best of intentions, things like “you’ll get closure.” If I’ve learned anything in all the years since the Air India bombing, it’s to listen more than speak.

That’s what I tried to do outside the gallery, when I met a former student from one of my writing classes. He and his wife thanked me as we stood together, our umbrellas shielding us from the pouring rain that threatened at times with sleet.  I bowed my head, reached out a gloved hand and said, “No, no, don’t thank me. It’s my duty.” Then I took a breath, looked up into his eyes and asked, “Pardon me, but…did you lose a family member?”

He shook his head and told me no, that he’d lost two friends. We both closed our eyes and stood in silence.

Sometimes it’s simple things that bring a little comfort: gathering with others; offering food, candles, roses. Sharing poetry. The beautiful people who organized the event offered all of this and more, then went out of their way to thank us. This generosity of spirit is inspiring in the face of enormous pain. It gives me a small seed of hope that, despite the human capacity for violence, we are also capable of compassion. I wonder if the families of Flight 752 will ever feel the same way.

It took me over 20 years, but I eventually did find a way to deal with the public and private grief of the catastrophic loss of my aunty and uncle.  I’m trained as a lawyer, but writing poetry is what brought solace. In 2013, I published Children of Air India, a book-length poem about the experience and aftermath of the bombing.

It made a huge difference for me, since media attention to public trauma is a complex mechanism. The bright lights of TV cameras can provide investigative truths and a validation of the depth of loss. But such attention can also put enormous pressure on grieving families to be model victims, to keep our heads down as we dab at tear-filled eyes, eternally gratefully for any kindness and never, ever angry. Oh, how I came to loathe that persona!

The word “victim” too often creates a kind of mute passivity, forcing those experiencing trauma into a box of projected stories written by somebody else. My wish for those who lost loved ones in this current senseless tragedy is that they’ll be given the space to share their own narratives.

First, though, we must stand with them, as only a very few did for the Air India families. To this day, one of the worst things about my experience was the way our story almost didn’t exist here in Canada. It often felt as if the bombing of Flight 182 wasn’t a Canadian tragedy at all, but something that happened to “those people,” over there.

For the families of Flight 752, the Canadian government must diligently pursue information about how, when, and why the bombing occurred, and share that information with their loved ones with transparency. Most importantly, those who are found responsible must be held accountable. After 20 long years, the Air India trial ended in an acquittal. That cuts deep, and I still bear the wound.

In addition to demanding justice, my humble hope is that Canada will continue to support those coping with this unimaginable loss. We must make space for them to tell their stories and hopefully, one day, to heal.