Is A US$79 Bidet Really Better Than Toilet Paper? I Tried It

The Tushy says it’s better for the environment—and your butt. 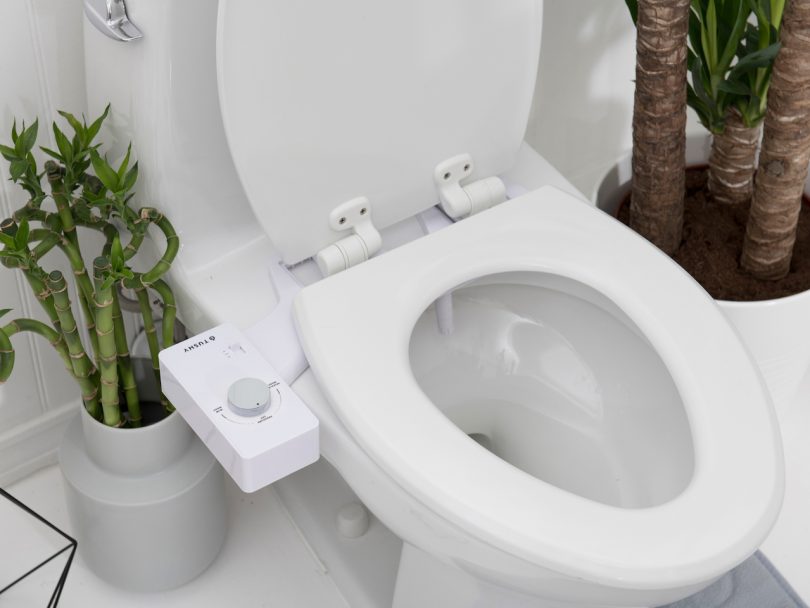 I can’t speak for the rest of the world, but I haven’t spent that much time thinking about my bum hole. I haven’t pondered its health, longed for its refreshment or wondered if my pooping experience has been fully optimized. But I wasn’t one of the over 110,000 people in North America who own what is essentially a strap-on bidet for your toilet—the Tushy.

But now, fair reader, I am, and I don’t think it’s bragging to say that ever since I have the shiniest derrière in town. You can see this sparkly sphincter from space! And it’s all thanks to the magical day an editor sent me a note asking me if I’d like to wash my ass for her and write about it—an impossible request to deny.

The Tushy is the latest below-the-belt accoutrement dreamed up by Miki Agrawal, the controversial founder of Thinx period underwear (which has been in the news recently due to reports, which the company denies, that it may contain harmful chemicals). It’s an attempt to woo the majority of North Americans from their stubborn love of toilet paper. Worldwide, we tend to be butt outliers—bidets or bidet showers (basically a handheld jet used to spray water at your business after you do your business) are de rigueur in many parts of Europe and Asia. Body cleanliness is also an aspect of faith in Islam—many Muslim homes will keep a water vessel of some sort in the bathroom that’s used to wash your bits. In Japan, three-quarters of homes have a washlet toilet (a toilet that sprays your bottom with cleansing warm water.)

Agrawal launched Tushy in 2015, touting it as a fresher, more environmentally friendly way to clean your booty that’s a special boon for everyone, especially preggos and other people who have trouble reaching their bum, kids with less-than-primo wiping skills (ie: all of them), women with post-baby-delivery carnage, and anyone who wants to help prevent “haemorrhoids, skid marks and dingleberries.” In 2018, Michael Che waxed rhapsodic about bidets in a Weekend Update monologue on Saturday Night Live after Tushy’s cheeky ads were rejected by New York City transit authorities: “People need to know about bidets! I just got one and it changed my life. It’s glorious. Food tastes better. I can jump higher. I want children now. I’m a better person. You know, the first time I used it, I cried. And not even because I was emotional, because the water went so far up, it came out my eyes.” (The company then sent Tushys to everyone at SNL because they aren’t dumb.) Ever since, everyone is talking about Tushy. Not a bad resume for a mail-order device that hooks up to your existing water supply and costs US$79.


“Aaaaaaaaah!!!!!” a crescendo-ing squeal is coming from my upstairs bathroom. It starts as a tenor, but then rises to a perfect castrato soprano. It’s our Tushy’s inaugural day on the job*, and my husband, intrepid soldier, is the first to experience Tushy’s tender touch, which is not so much tender as an extremely pointed missile of cold water right up your butt.

“Do you like it?” I ask him eagerly through the bathroom door, notebook in hand. “What do you like about it exactly?”

“I will divorce you.” 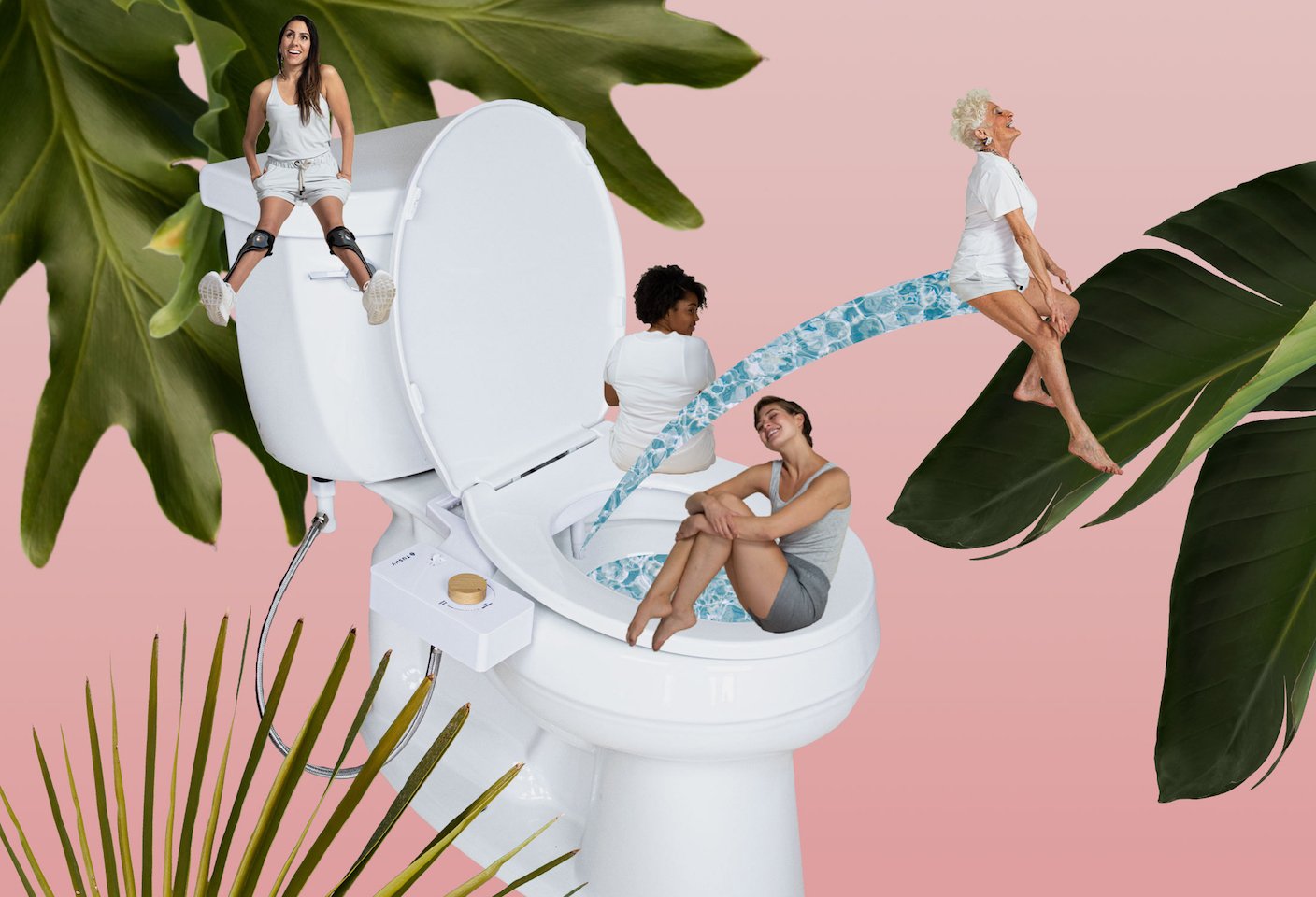 To his credit, he is the brave soul who installed the Tushy. It took him about 10 minutes. He disconnected the water that goes into the toilet tank by unscrewing the hose, and then put the Tushy—which basically looks like a small radio—between the toilet and the water supply, sort of similar to the way you would use a power bar to plug in multiple devices at once. The Tushy control panel, which has knobs to adjust the pressure or angle of the spray, sits next to the toilet seat and you activate when necessary. You still need to pat dry afterwards, but you use considerably less toilet paper than you would if it were the full cleanup crew.

My 8-year-old—perhaps better known as the only human who can use an entire roll of toilet paper in one sitting in the Drain Destroy Extravaganza of 2016—is a fan of Tushy, but unless he positions himself just so, his little arse doesn’t take up enough space, so the spray (the nozzle is nestled under the lip of the toilet seat) just parkours off his backside and coats the bathroom in a tsunami of icy cold good intentions.

“I feel violated,” my friend whimpers after a test drive. “It’s like a burst of terror—I’m never going to recover. It’s so cold!”(We’re testing the Tushy Classic. If you upgrade to the Tushy Spa, which retails for US$119, you can attach it to your hot water supply, which I think would be infinitely more relaxing.)

Personally, I find it underwhelming. Maybe I don’t take impressive enough poops? Maybe my poops are too beautifully formed, and just neatly rocket out of their gloriously perfect exit hatch leaving a minimum of debris in their wake? Surely so many fans can’t be wrong. I decide to ask a friend who struggles with bowel issues if this would be useful to her. She lives too far away for an in-person tuchus touchup, but I send her an email with all the relevant info (plus helpful Youtube videos because I’m a very good friend.)

Dear Leah
I’ll be honest, this is not the direction I thought our correspondence would take. That said, the issue you mention of “wiping oneself raw” is a situation I face regularly, so I wouldn’t rule it out. There have definitely been times when I thought a bidet would be just the thing.”

Jen Gunter, Twitter’s unofficial resident gynaecologist and the author of The Vagina Bible, does think that bidets are just the thing.

“I’m totally pro bidet,” she says. “Doctors see all kinds of skin issues related to over-wiping and irritation. The skin there is quite fragile, and digging around in all the nooks and crannies with toilet paper stimulates your sphincter muscle and will make you leak more stool. It’s not uncommon that it takes eight wipes to feel satisfied. Bidets are a great alternative—then you just blot ’n’ go.”

Consuming less toilet paper is part of Tushy’s pitch—they say their bidets only consume 1.3 gallons of water per use, which is a lot less than the 37 gallons (no, really!) it takes to make one roll of toilet paper. Agrawal’s father emigrated from India, and a portion of the proceeds from each sale also goes to fund an organization there that builds clean latrines for the poor.

In the end I decide I’m indifferent to the Tushy, but it’s better for the planet, so it wins a permanent throne-adjacent spot in our home. So hey, if you’re still struggling for the perfect Valentine’s gift for that special person in your life, maybe you can send them a Tushy! It just may give them a hole new life.