After My Mother Died, I Learned How To Talk To A Grieving Person

As a culture, we don’t know how to deal with death. Hearing things like 'at least she’s not suffering anymore' or 'she’s in a better place' just made me feel more alone. 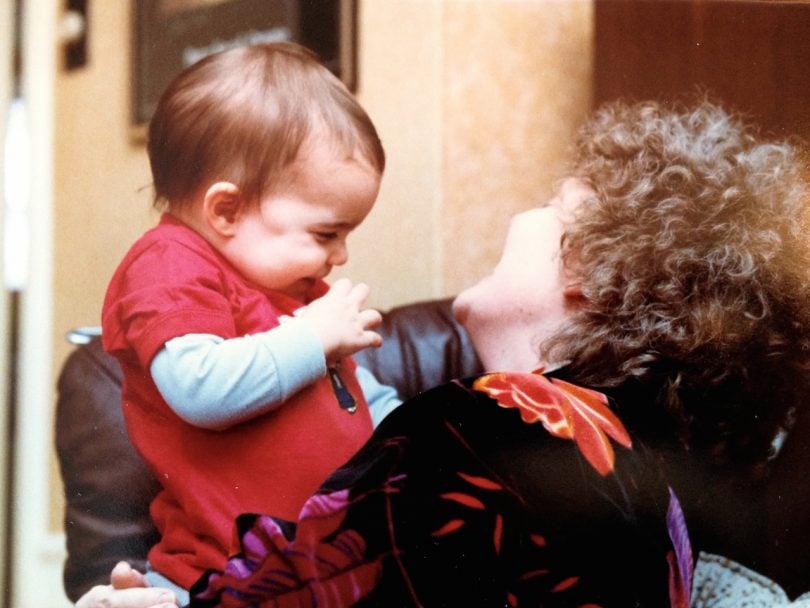 The writer as a baby with her mother. (Photo, courtesy Sophie Kohn.)

I was pulling it off. I was playing the role of A Normal Person. And I was furious at everyone for believing me. In a cozy Toronto bar, a friend was about to play an acoustic guitar set and sing some songs. Gentle and easy. All I had to do was listen.

But the mellow lights were too bright. The quiet audience chatter was too loud. The conversations around me were shallow and irritating, and scratched like a wool sweater. So, I turned to the person sitting beside me, a woman I didn’t know. She smiled. And then I blurted out, “my mum just died.”

Maybe it was because my unexpected statement gave her no time to assemble a tidy and polished reaction, but her response was straight-up glorious.

It was honest, human, unguarded and real. I felt instant relief. Properly seen. My invisible wound made visible.

She didn’t tell me “it’ll get easier” or “you’ll be okay.” She didn’t try to fix the angry black hole in my chest, or try to force me into a brighter place simply because my darkness made her uncomfortable.

There was no “at least she’s not suffering anymore” or “she’s in a better place.” She didn’t demand I somehow get a detached perspective on a searingly painful loss. She didn’t say “I can’t imagine what you’re going through”—words that create distance rather than closeness, that form a wall instead of a bridge. She didn’t confirm my fear that I was inhabiting a far-flung, lonely planet where no one could reach me until I assimilated to regular life.

Instead, she looked at me and recognized exactly where I was: newly lost in the depths of disbelief and rage, a fragile, shaky thing with a shattered heart who was not yet ready to do anything but freak out about the awful, inexplicable randomness of being alive. And so, she climbed down a dark, quiet ladder and met me there.

As a culture, we tend to stay put the top of the ladder, teetering, clutching it nervously, waving awkwardly at anyone down in the hole. We tend to keep such people as tiny dots in the distance. Truly stepping inside another person’s grief forces you to try on the idea of death, and that can be terrifying. It leaves you no choice but to imagine it was your own mother. To imagine it was you.

It’s extremely uncomfortable to do what that stranger in the bar did. Confronted with any struggling person, our impulse, typically is to coax them out of the murk. We need to believe they’ll resurface quickly, and soon. We need to see them do it, or at least see them try.

But death is so final, so permanent, so non-negotiable, that it renders our usual tools irrelevant. We aren’t used to problems we can’t solve. We aren’t accustomed to sitting quietly on the bleak shores of a tragic event and simply allowing it to be the terrible thing it is. Truly doing that feels super-awkward.

But we have to say something, so we reach for sanitized, prepackaged sentiments without giving much thought as to how our automatic responses further alienate and isolate the grieving person.

Many of my interactions with people in those early days of mourning left me tired, frustrated and lonely. People would ask me how I was doing, and for a brief flicker of a moment, I felt hopeful I could answer honestly. But you can’t say “awful and devastated” and leave it at that. That’s when their faces would flinch, their panic became palpable and they struggled to find words. That’s when they’d begin minimizing my sadness, desperately trying to sweep up an oil spill with a tiny plastic broom. “It’s going to get better!” was a statement I always wanted to counter with an exasperated, “Okay, but it’s not yet.” I learned to pad my answer, to soften it, to help make other people more comfortable. “Awful and devastated, but I’m taking it one day at a time, doing some gentle exercise, seeing a counsellor, getting through it.” For the first year, none of that was true at all, but it seemed to be what people needed to hear.

My mum was a beautiful explosion of light. She was fierce and fiery, witty and hilarious company, wise and endlessly generous with that wisdom. She was one of the leading paediatric neuropsychologists in the world. She was a radical feminist before it was safe to be one. Of course, I loved her but I also genuinely liked her—more and more the older I got. She was one of my favourite people to spend a breezy, sprawling Sunday with, the kind where you talk for hours over iced tea on the porch and have no particular plans.

When she was diagnosed with terminal colon cancer in 2013, my sister and I dropped everything to look after her. She was in treatment for a year and a half. Her decline felt somehow both mercilessly slow and panic-inducingly fast.

The three of us had always been a supremely tight unit. That year, we kept doing what we’d always done best: talking to each other. Around her sunny dining room table, at her bedside, in waiting rooms and chemo bays. We looked her illness right in the face together and talked about dying and fear, about living well. About love, friendship, courage and regret. We talked openly, honestly, constantly, until she couldn’t talk anymore. The day she died, there was nothing left unsaid. 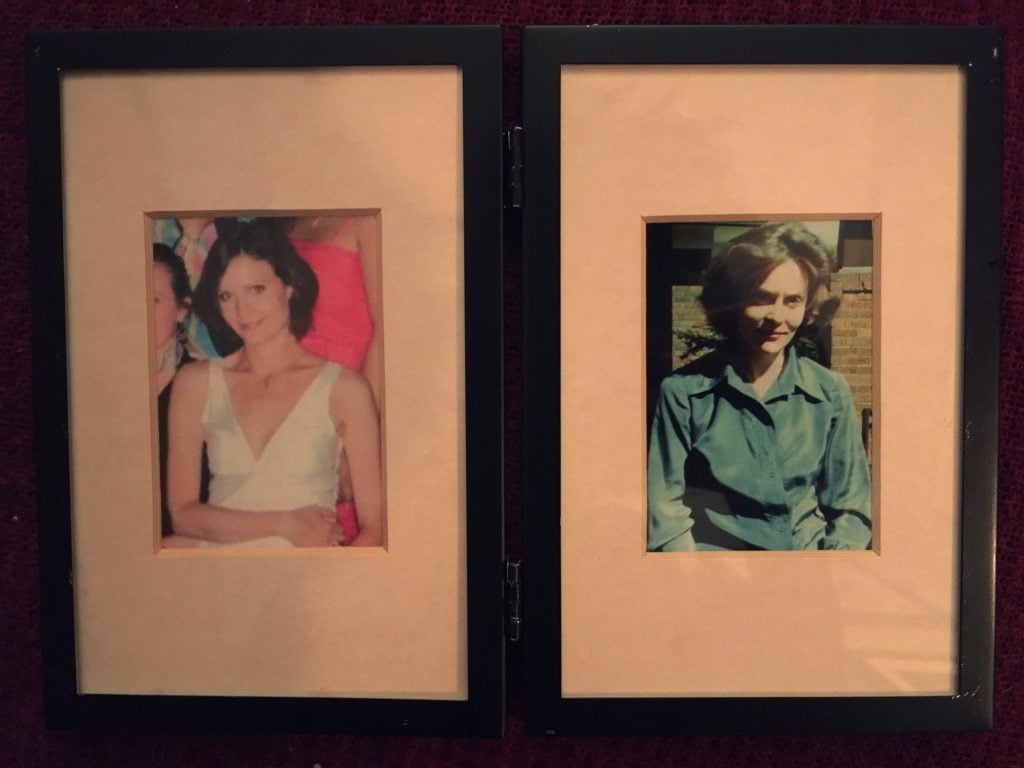 Photos of the writer and her mother side by side. Her mother always commented how similar they looked. (Photo, courtesy Sophie Kohn.)

For months and months, I heard one particular sentence a dizzying number of times: “Let me know if there’s anything I can do.”

When I emerged, impossibly, on the other side of her death, the days felt long, silent, excruciating, disorienting. Everything took impossible effort. Socializing was surreally exhausting. Making toast was an accomplishment that required a 32-hour nap. And yet, bereavement was a full-time job, so my sister and I were also planning a funeral, cleaning out closets, informing relatives all over the world, all while juggling our regular lives.

“Let me know if there’s anything I can do” puts the onus on an emotionally and logistically overloaded person to identify her needs somewhere in a hopelessly tangled knot of feelings, generate a task for you, contact you, talk to you, and awkwardly assign you a job. It sets up the expectation that the grieving person will take the lead.

The thing is, it’s not hard to imagine what a grieving person might find useful. Food, rides, groceries, a house-cleaning service, babysitting, a massage. In the final days of my mum’s life, one friend slinked into the hospital, left a package of cozy new pyjamas and a toothbrush outside the room, said nothing, and left. The people who saved me in those first few months picked a thing, showed up to do it, and didn’t require anything of me beyond opening the door.

They were also willing to stare directly at death with me and not wince. A different friend drove me to the hospital the day we got the news that the end was imminent. I was filled with dread, nauseous, engulfed in terror to the point I had to sit in the backseat clutching my knees to my chest. “Look out the window,” he said, and I did. “All those stores, restaurants, designer dogs, fancy cars—we created all of those things specifically to distract ourselves from the exact feeling you’re feeling right now. You’re not the messed up one. The rest of us are.”

Anything we say to a grieving person is worth running through a filter: Is this an act of giving or an act of taking?

Are you pressuring them to hurry up and arrive at a more ideal emotional state before they’re ready? Or worse, fake it for your benefit?

Are you so palpably uncomfortable listening to grief that they have to downplay their pain and reassure you that they’re okay?

Are you adding tasks to a 47-kilometre-long To-Do list?

All these things sap energy. They are things taken, additional demands.

Before my mum died in 2014, I’m not sure I really considered the words I used to try to reach someone in distress. I hadn’t ever felt the full weight of what it means to grieve. It was an experience that happened to Other People Somewhere Over There, and so my responses were correspondingly detached. Losing my mother has made my words a little more intentional, a little more thoughtful, and a little less polite.

When someone is mourning, we turn into strange, nervous, robot people. Death is one guaranteed experience that unites us all, yet, somehow, it’s the time we sound the least human.

Recently a coworker’s father died, and we circulated a card. When I opened it to sign it, there were 25 neat and identical carefully printed sentences: “Sorry for your loss” and “My deepest condolences.” It was eerie to me: the death of someone we love is perhaps the scariest, deepest trauma there is. How are our responses so distant and tidy? How are we not screaming off a cliff, or at least using an exclamation point?

Four years later, my own grief continues to swell and retreat and swell again. Sometimes the reasons are predictable and I see them ambling over a hill toward me—Mother’s Day, her birthday. Other times, some woman in a grocery store on an unremarkable Tuesday night has her shoes and I suddenly miss her beyond all the words in the world.

Grief also muddies and complicates the good and magical things that happen to me. The sparkly rush of a major accomplishment is quickly followed by the hard realization that the person who’s always been at the other end of my first giddy phone call is no longer there. I still have her number saved in my phone. It helps me keep those many years of phone calls close. The memory of them. The feeling of them.

In the moments where I’m struck anew by the gravity and the permanence of my mum’s absence, I’m most comforted by people who allow themselves to react as human beings, who are messy, real, open, and affected by what I’m saying. People whose words provide tiny resting places, not asking anything of me other than to stay exactly where I happen to be that day. People whose words are really and truly their own words—such as a loud string of incredulous obscenities shouted in a crowded Tuesday night bar.

The songs were wild and beautiful after that.