Lisa Raitt On Marriage After Her Husband’s Alzheimer’s Diagnosis

The former MP on what it's like to be a caregiver to her husband, Bruce. 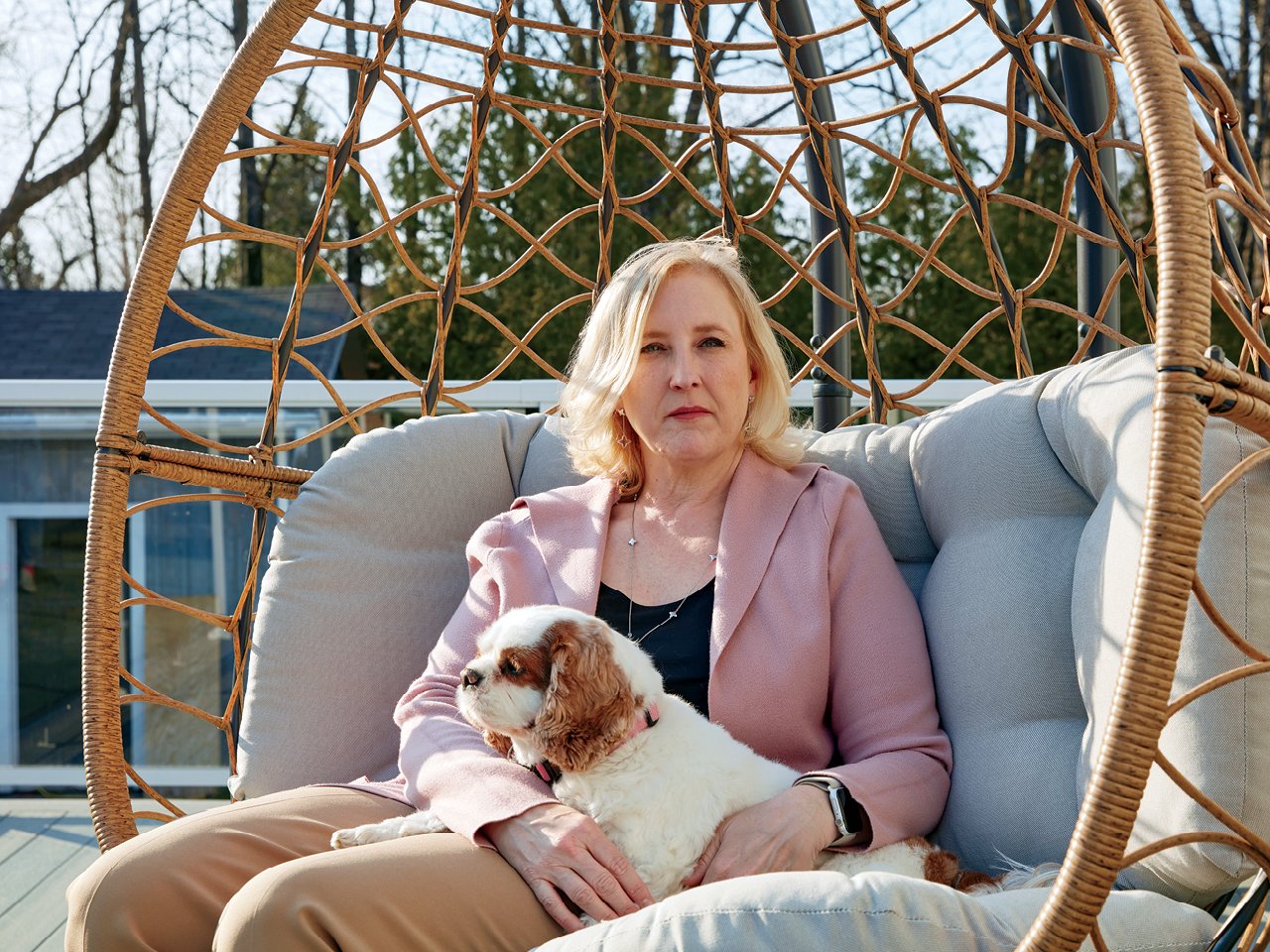 On New Year’s Day 2021, I called the police on my husband, Bruce. That morning, I had gotten up and made a big breakfast: sausages, bacon, French toast, a few crepes. Bruce—who is six foot three and at the time weighed 250 pounds—was walking around with a jacket on and no pants, which was not unusual. But then he started getting really angry, growling a lot. And he started to advance toward me very quickly with the intent of hurting me. He did this three times. I had installed cameras all over the house so I could monitor his movements, and I watched the footage afterward to make sure I hadn’t misread the situation. I feel so much guilt for what happened next.

It looked like he was coming at me, like he was going to check me into the boards or tackle me like a football player. You could see he didn’t know who I was. He had no recognition. He just wanted to hurt me because, in his mind, I was keeping him from something he wanted. The third time he came at me, I raised my voice and my 16-year-old son tried to come between us. My other son and his girlfriend were upstairs and I thought, “If Bruce goes on a rampage, I’ve got somebody in the house who isn’t family, and I can’t take the liability.” So I called 911.

They sent six police officers, and they had to call for backup: four paramedics, four additional officers and two supervisors. They put fabric restraints on Bruce and he broke them. So then they cuffed him. I couldn’t watch. They sent so many people because Bruce is on the registry for being predisposed to violence. Also on the registry: the fact that he has young-onset Alzheimer’s.

Bruce and I first met in March 2008 through work. At the time, I was the CEO of the Toronto port authority, and he was the CEO of the Hamilton port authority, which competed for business on the Great Lakes. We eventually had a business lunch together, with other people. When I decided to run for the federal Conservatives later that year, Bruce started volunteering—watching me from the back of my campaign events and always sending a note after to say how well I did.

After I was elected as MP for my riding of Milton, Ont., Bruce would often “just happen” to be in Ottawa. There was a lot of jewellery. He sent me a diamond band four months after we met. When I became cabinet minister, he sent me diamond earrings. It was nice, but I didn’t quite know what to do. He asked me to marry him in January 2009 before we’d even begun dating. I made a joke out of it—I was like, “Whoa, buddy.” But I could never say no. I never told him to go away. I never told him to stop.

I didn’t accept the earrings until after we officially started dating, in April 2009. It was a tumultuous time, and I’m quite sure now, in retrospect, that Bruce’s dogged pursuit of me was an early sign of his Alzheimer’s. Personality shifts and aggression can be indications of the disease. His friends will talk about how jovial he was before, how easygoing. The Bruce I knew was aggressive on deals, elbows-out sharp—not a softer, cuddly teddy bear kind of guy at all. The doctors believe his disease stretches back to 2013, but I didn’t know it was Alzheimer’s until 2016, when he was officially diagnosed. Bruce was 56. Something had happened where he almost lost his job. And at the very last minute, one of the directors at his work said, “There’s got to be something wrong here.” Bruce went to see a neurologist. After the diagnosis, I cried for three days. I cried for what we were going to lose. I cried for the decisions we were going to have to make. I cried out of fear.

Four months later, we got married. 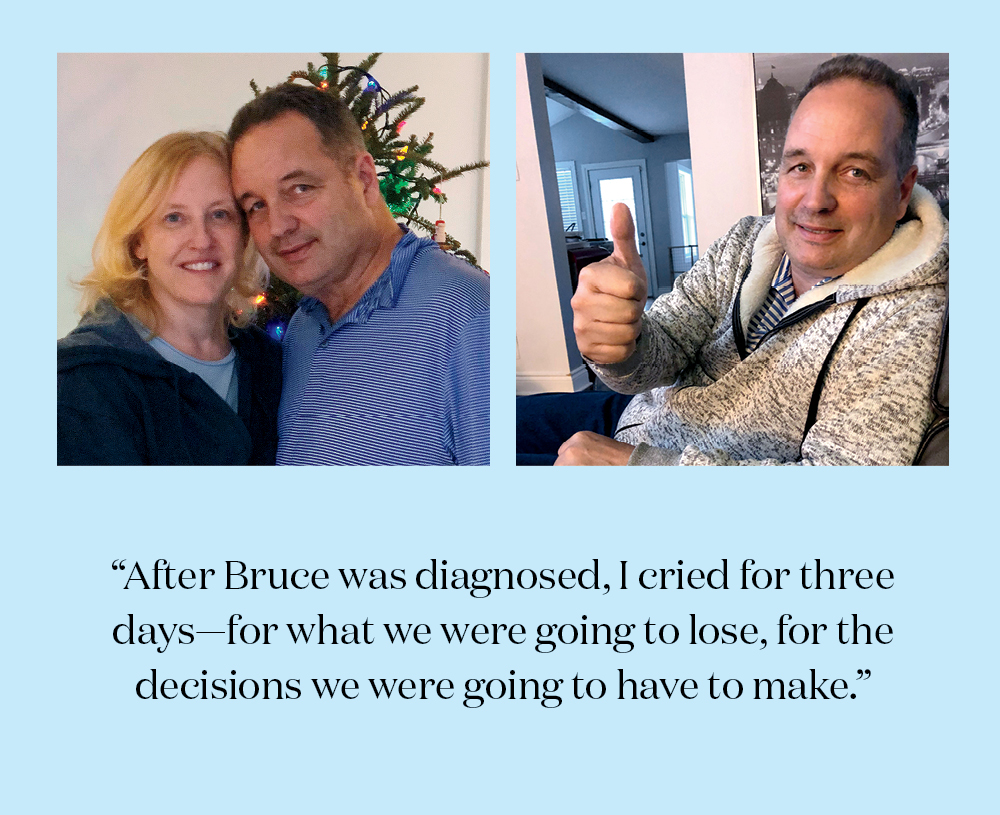 Before Bruce’s diagnosis, I wasn’t sure I wanted to get married, because his behaviour had begun to worry me. He would call me in Ottawa and say weird things. He told me he hated my parents, which was new. I remember taking my kids to Cape Breton in 2013 and when I got back, he had bought a brand new truck without talking to me about it. I thought, “I don’t know this guy.”

But when the diagnosis came, it removed that barrier—it was like, “This is not you; this is a disease. I’m going to give you comfort, and I’m going to give me comfort.” And I loved him. From 2016 to now, it’s been beautiful. We travelled, we made memories. He was attentive and didn’t have any issue with my career. He loved socializing and was a great escort.

Bruce slowly progressed into the disease and started doing other odd stuff, like buying tons of really expensive clothing—he was always a clothes horse, but this was next level. He had always loved doing laundry, but now he’d hang it wet all over the house and then wash the clothes all over again. The kids and I would go, “Oh my God, when is this going to stop?” As people in the field will tell you, it always stops. But then the next stuff happens, and the ability to perform tasks just disappears. I think the last time he picked up the phone to call me was a year ago in February. I saved the last voice mail he ever left for me, and I’m so glad I did.

Last spring, I hired caregivers to take Bruce on outings during the day and stay at home with him, so I could work. It had gotten to the point where he was incontinent, and I would have to disinfect the entire house. I literally lived in fear of what the night would bring, as that was often his most agitated time—waking up, hallucinating, sometimes hitting me, thinking I’m some kind of threat, as he did on New Year’s Day.

After he was taken away on New Year’s Day, Bruce went to the local emergency room, then the hospital and eventually to Baycrest, a leading geriatric care facility in Toronto that specializes in aging and brain health. Like all new residents right now, he had to quarantine for two weeks because of COVID protocols. During that time, he refused to eat and he lost a lot of weight.

In the first days I spent without him in the house, I went through the grief of being a widow and being alone; I would see his stuff around and cry because he’s not here anymore. I got sad, and then I got my hopes up, like, “Well, maybe he’s going to get better.” And then I remembered that absolutely no one gets better from Alzheimer’s. Nobody.

It’s hard to find joy in what’s going on. But you still find those things that you can be grateful for. I use the word grateful a lot. I tell myself I’m grateful for certain things—and I am. I watch a lot of TV, good and bad. I let myself cry at movies. I’m escaping that way. I’m not beating myself up because I’m not eating well. And I’m not beating myself up because I’m not exercising. Every day that I get through is a good day. 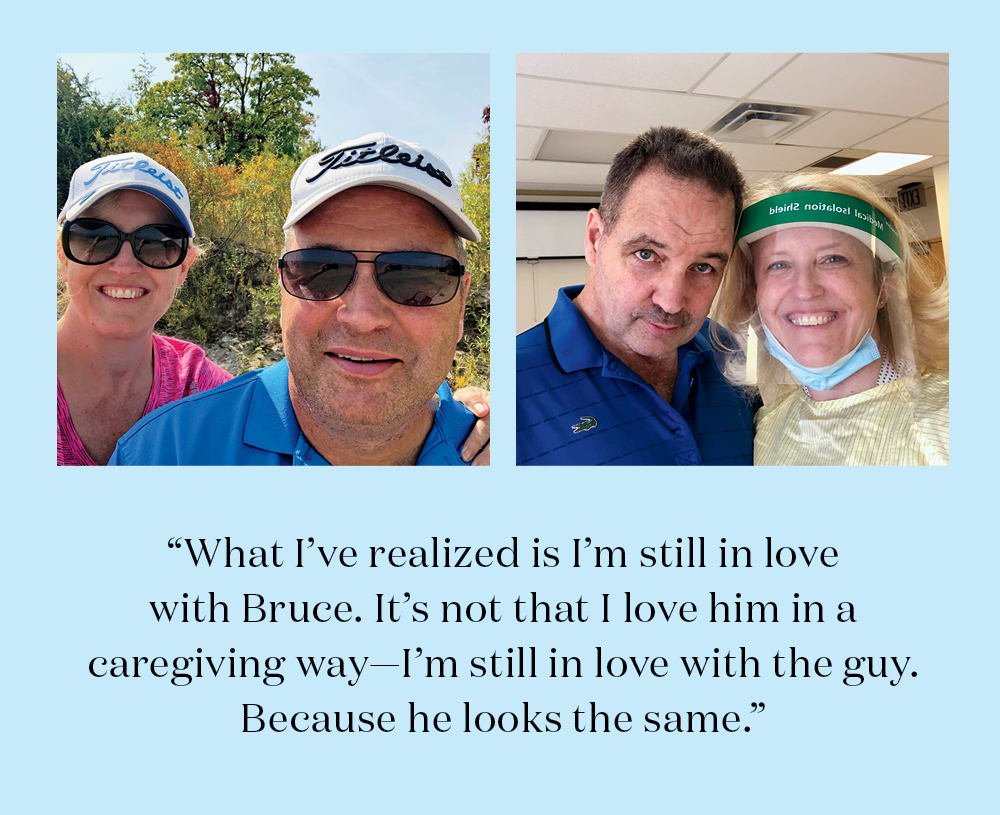 A lot of caregivers tend to push people away, and I think I’m trying to avoid that by inviting people into my life. I have this group of folks going through similar experiences with their partners and family members that I talk to online on Thursday nights. One thing I learned from them is that you can give yourself permission to think about what the future looks like. And I do: I think about my list of things I will do when this is all over, and top of the list is I want to go away with my sons on a vacation and just make up for the fact that I’ve been more focused on Bruce’s caregiving than I have been on them for the past six years. They’re growing up so fast.

Because I worked in federal politics, I get asked about whether there should be more government support for caregivers. I’ll go all conservative on that one and say there should be better tax breaks. But I think the federal government should fund organizations like the Alzheimer Society to support people going through this, to provide programming for people with Alzheimer’s and to fund research for a cure. It’s prohibitively expensive to hire personal support workers. The amount of care that’s needed is physically, emotionally and psychologically exhausting, so you need multiple workers to get through a day and night of care.

Instead, I’ve at least been able to visit him in a conference room at Baycrest. I have to wear a yellow smock, face shield and a mask; sometimes I’ll pull the mask down and let him see my face. I usually overstay the hour of time we’re allotted.

The first time I saw him in person since sending him to hospital that day, he recognized me—or at least recognized that I was important to him. I don’t know if he knows it’s Lisa, but he certainly knows it’s the nice lady who looked after him. He was happy to see me and I brought him some treats. And the hour went by too fast. He slept through most of it.

Right now, I can only visit Bruce once a week. What I’ve realized is that I’m still in love with him. And it’s not that I love him in a caregiving way—I’m still in love with the guy. Because he looks the same. He still kind of tried to give me a little kiss recently. He still gave me a hug. I’ve heard him say, I love you. The memories are enough to buoy me.

This conversation has been edited for length and clarity.