It’s not clear how many Americans will turn to Canada for abortion care, but clinics are readying as best as they can. 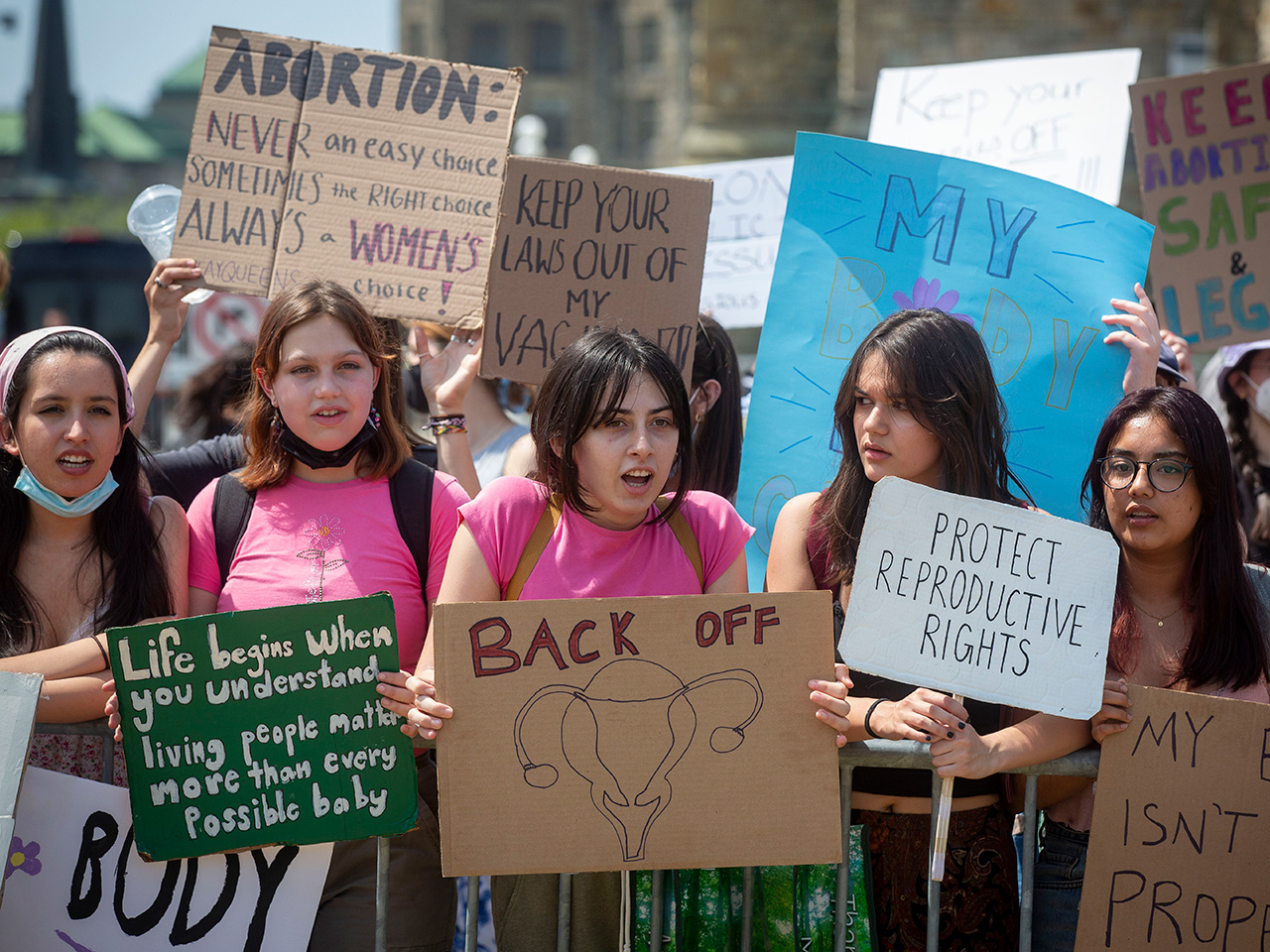 Protesters hold pro-abortion signs on Parliament Hill in Ottawa in May 2022. (Photo: The Canadian Press/Lars Hagberg)

Joyce Arthur’s phone has been ringing nonstop for the past two weeks, and her inbox is filling up relentlessly. She usually fields a lot of requests, but this, she says, is on a whole new level.

Arthur is the executive director of Abortion Rights Coalition of Canada, one of three national organizations fighting for improved access to abortion care in Canada. The calls have been coming since the United States Supreme Court overturned Roe v. Wade last month, ending the constitutional right to an abortion in the U.S. The fear Americans felt travelled north of the border, and Arthur has been working to keep Canadians up to speed about what it means in this country. The day we speak, she has already taken calls from five reporters—and it’s only late morning.

It’s not just journalists who have been contacting Arthur. People across the country want to know what they can do to support Americans and secure access in Canada—how they can volunteer, and what’s coming next.

While documents about the decision to overturn Roe were leaked in May, Arthur says the news was still a blow. “To see it happen was so…disheartening and depressing,” she says. “It’s a patriarchal, cruel thing to do.” So far in Canada, she says the response has been an emotional one: “It’s having a huge impact in terms of the shockwave, outcry, outrage, concern, fear, anxiety…all these directions the conversation has taken.”

Roe’s overturn means states will be responsible for setting their own laws around abortion. Texas and Missouri, for instance, have already declared the procedure illegal. Some democratic states are taking steps to ensure access will continue; so far, California, Washington and Oregon have pledged to keep abortion available on the west coast. Still, the reversal means half of the country could be left without access to abortion services.

Karina Gould, minister of families, children and social development, has been working to secure funding for access to abortions both in Canada and abroad. She says this lack of access will not result in fewer abortions; rather, it will result in fewer safe abortions. The result? “The number of women who are going to die is going to increase.”

Some people in the U.S. will turn to Canada for help. Martha Paynter, a Fredericton-based abortion care provider and author of Abortion to Abolition: Reproductive Health and Justice in Canada, says her colleagues at various clinics have been fielding calls from Americans looking for information about coming to Canada for their procedures, but so far, she hasn’t heard of this actually happening. Making that trek involves navigating a different healthcare system and access to passports, money, and time off work and away from family. Most Americans who can’t get care in their own state will likely try to travel to another state, she says. “We’re unlikely to see a mass patient migration,” she says, “but I’m prepared to be wrong.” Right now, Paynter says, it’s too early to tell what will happen. Gould agrees.

Still, Paynter says, abortion providers in Canada are likely to help where and when they can. Athena Health Centre in St. John’s, for instance, says it will provide abortions at no charge to any Americans in need. But calls to Canadian clinics along the U.S. border didn’t reveal any other such generous offers, and cost remains a major barrier for Americans seeking abortions here.

When news of Roe v. Wade’s overturn initially leaked, Ontario Coalition for Abortion spokesperson Carolyn Egan said she expected providers in Windsor to care for those who may end up without access in Michigan, athough no Windsor provider has made a public statement at the time of publication. Providers at the Women’s Health Clinic in Winnipeg, meanwhile, have said they’re considering whether to offer abortions on additional days each month in order to help a potential influx of patients. The Women’s Health Centre at Regina General Hospital will see American patients for the procedure, too, but it will cost them about $5,000.

Access is also in flux in the U.S.: North Dakota’s Red River Women’s Clinic, the state’s only abortion clinic, was forced to close, with plans to reopen on the other side of the state border in Minnesota. Mississippi’s last clinic is moving to New Mexico. Patients are scrambling to reschedule their abortions to clinics in nearby states where the procedure is still legal.

Arthur says it’ll likely only be wealthier Americans who travel here to access care. But, she notes, the U.S. has nearly 10 times Canada’s population, meaning significantly more abortions are needed there per year. “Even a small number [of American patients] could really overwhelm our healthcare systems,” she says, stressing that there aren’t enough doctors in Canada to provide health care for everyone already living here. “We want to be able to help Americans,” she says. “We also have to make sure we have the capacity to help Canadians first.”

Nonetheless, Arthur says clinics are preparing as best they can. Many clinics aren’t open full time, so she says it’ll be important for them to secure more funding, be open more days, and hire more staff. “Nothing’s going to happen without extra money, and where is that going to come from?” she says.

Some funds have already been dedicated to the cause. This spring, the federal government announced funding for the Canadian arm of the National Abortion Federation to train providers, ensure clinics have capacity to serve patients, and provide financial and logistical support to people seeking abortions, so Arthur is not without hope. “Maybe the influx of Americans will be offset by an influx in providers—I don’t want to be all doom and gloom,” she says. “Maybe it will all work out.” For that to happen, though, provincial governments will have to step up and allocate more funds to abortion care.

In light of Roe v. Wade’s repeal and amid concerns about abortion access, Arthur says people often ask her, “What can I do?” She doesn’t have an easy answer. You can reach out to your elected representatives to increase healthcare funding to provinces, with a contingency that added funds go toward reproductive justice initiatives including abortion access. Signing petitions and making donations to organizations supporting reproductive justice are other straightforward steps.

Paynter, meanwhile, is confident this right to bodily autonomy will be won back south of the border. One of the most important things that can be done in the meantime, she says, is pushing for increased education and awareness around medication abortions, which are still FDA-approved across the U.S. for abortions up to 10 weeks (80 percent of abortions obtained in the U.S. happen within this timeframe). She says now is the time for providers to recommit to the care they can give. If providers care about access, but their hospital has a written—or unwritten—rule about not providing access, now is the time to ask why these hospitals exist in Canada.

Other protections Paynter suggests activists might fight for include an end to charitable status for so-called crisis-pregnancy centres, which are thinly-disguised religious institutions that attempt to talk people out of getting abortions. At least 180 of these exist across Canada. Nursing schools don’t always have abortion care as part of their curriculums—she also suggests healthcare professionals should change the conversation by asking each other why about that, too.

One thing Gould and Arthur are sure of is that those who are saddened or enraged by this news need to take time to be upset and process their feelings. But after that, they’ll need to get back to work.