Oscars 2021 Recap: What Went Down At This Year's Socially Distanced Show

The pandemic didn’t stop some of the year’s best in film from celebrating at the Academy Awards. 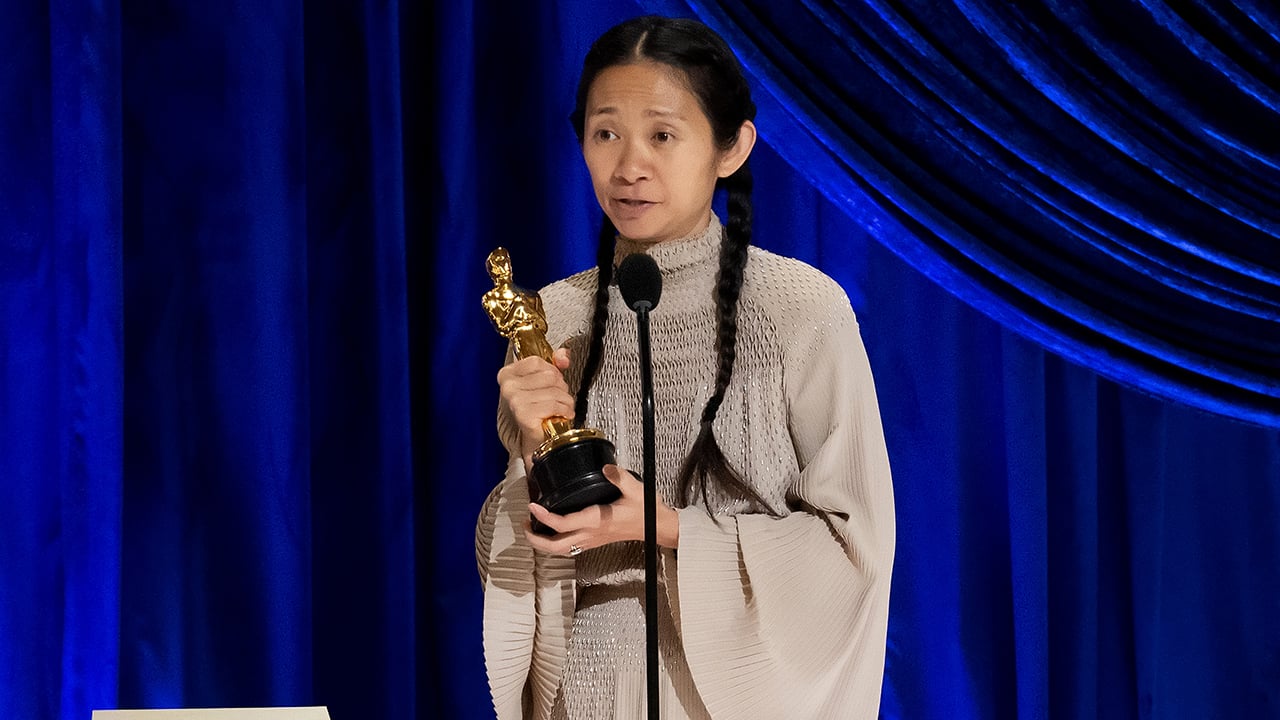 The Academy Awards made history this year as the first to be held in a train station during a global pandemic (don’t worry, it was more glamorous than it sounds). With masking, COVID-19 testing and social distancing, the pared-down show went on to celebrate some of the past year’s biggest films and talent to hit the big screen.

Many of the winners also made history, with several notable firsts. And, from the buzzy best-picture nominees like Minari, Nomadland and Sound of Metal, to history-making directors and actors like Chloé Zhao, Yuh-Jung Youn and Riz Ahmed, the show didn’t disappoint—not even with a much-smaller red carpet and less pre-show fun, aside from the Steven Soderbergh-inspired beginning credits, compared to years prior.

The show must go on, and go on it did, with boundary-breaking wins and political commentary—and social media confusion as the best picture award, which is traditionally given last, was presented ahead of the best actress and actor awards, making for an anticlimactic end to the ceremony. (An absentee Anthony Hopkins took best actor in the final award of the night, winning over the heavily favoured late actor Chadwick Boseman.) Here, the best moments from this year’s socially distanced show at Los Angeles’s Union Station.

Zhao is the first woman of colour and first woman of Asian descent—and only the second woman ever—to take home the prize for best director. She won for her feature film Nomadland, which follows Fern, played by Frances McDormand, as she travels through the American West after losing everything during the Great Recession. It was her first Oscar. (Kathryn Bigelow was the first woman to win best director for her war thriller film The Hurt Locker in 2010.) The film went on to take home the award for best picture, making it only the second film directed by a woman to win in this category, as well as a best actress award for McDormand; it was McDormand’s third win in that category. Accepting the best picture award, McDormand howled in honour of the the film’s production sound mixer Michael Wolf Snyder, who died by suicide in late February. “We give this one to our wolf,” she said to the audience, with her co-stars and Zhao tearfully smiling behind her.

Just weeks after winning her first SAG Award for her role in Minari, she did it again, only this time at the Oscars. Yuh-Jung Youn, who plays Soon-ja in the moving film, became the first Korean woman ever to win in the supporting actress category—and her acceptance speech drew many laughs from the audience. She gushed over her award announcer “Mr. Brad Pitt,” saying it was an honour to finally meet, despite wondering why he didn’t visit the Minari set in Arkansas. She paid tribute to the other nominees in the category—including Glenn Close, Olivia Colman, Maria Bakalova and Amanda Seyfried—and claimed it was just luck. “I don’t believe in competition, how can I win over Glenn Close? Tonight, I have just a little bit of luck, I think, maybe.”

The opening remarks speak to the Derek Chauvin trial

As the show opened, first-award presenter Regina King commented on the trial of Derek Chauvin, who, only days ago in Minnesota, was found guilty of the murder of George Floyd. “It has been quite a year, and we are still smack-dab in the middle of it. We are mourning the loss of so many, and I have to be honest, if things had gone differently this past week in Minneapolis, I might have traded in my heels for marching boots,” she said.

She continued: “Now, I know that a lot of you people at home want to reach for your remote when you feel like Hollywood is preaching to you, but as a mother of a Black son, I know the fear that so many live with, and no amount of fame or fortune changes that.”

The film world has been able to continue, despite the national health crisis, with testing, masking and distancing protocols in place. The same went for the Academy Awards, which King made sure to explain to the crowd—and the world watching. The smaller-scaled event, she said, was being treated legally as a film set, “starring” all of the night’s nominees and guests. Only 170 people attended, and the guests watching were switched in and out as the ceremony continued, and wearing masks when the cameras weren’t on them.

Hollywood’s brightest typically gather at the Dolby Theatre, but thanks to the pandemic, this year’s event took place at Los Angeles’s Union Station. It’s the first time the event has ever occurred in a station in the 93 years since the Oscars began. The first-ever Oscars was at the Hollywood Roosevelt, followed by multiple other venues including the Shrine Auditorium and Pantages Theatre. It moved to the Dolby Theatre in 2002, where it remained until this year.

Alan Kim was the cutest red-carpet attendee this year

One of the evening’s most precious Kodak moments incited tweet after tweet of #CoupleGoals comments. On the red carpet, which was noticeably much smaller this year, Best Actor nominee Riz Ahmed paused to fix his wife’s hair before getting their couple shot together. “I’m the official groomer for the evening,” Ahmed, nominated for his leading role in Sound of Metal, said to the photo pit. And the Best Red-carpet Husband Award goes to…

Questlove, and his gold Crocs, have arrived to the 2021 #Oscars red carpet https://t.co/JxHhTRdpzD pic.twitter.com/Ho7c7FZyJH

Celebrated musician Questlove was the Oscars’ music director this year, spinning tracks between announcements in place of the usual live orchestra. He’s also the in-house DJ for the night, as he was last year. The music was largely created for the show specifically by Questlove and his band, The Roots. He also made a statement on the red carpet with his gold Crocs.

Emerald Fennell becomes the first woman to win a screenplay Oscar in 13 years, thanks Zack Morris (sort of)

The first award of the night went to Emerald Fennell, aka Camilla Parker Bowles in The Crown, who wrote, directed and produced best picture nominee Promising Young Woman. She was the first woman to win for original screenplay in 13 years, since screenwriter Diablo Cody took home the same award for Juno.

“So, the only speech I ever wrote is when I was 10, and I looked to see if there would be anything useful from it, but unfortunately I only thanked Zack Morris from Saved by the Bell, who was my very supportive husband. Unfortunately, he hasn’t been as much a part of my life as I’d hoped, and so that speech is not that useful,” Fennell said.

Daniel Kaluuya remembers Fred Hampton in his acceptance speech: “How blessed we are that we lived in a lifetime where he existed…When they played divide and conquer, we say unite and ascend.” https://t.co/sdgeoBK7lX #Oscars pic.twitter.com/T58yZO1Bq7

Kaluuya won for best actor in a supporting role as Black Panther chairman Fred Hampton in Judas and the Black Messiah. “To chairman Fred Hampton. What a man. How blessed we are that we lived in a lifetime where he existed,” Kaluuya said. Then, towards the end of his speech, he completely baffled his mom by saying: “It’s incredible. My mom met my dad, they had sex, it’s amazing. Do you know what I’m saying? I’m here, do you know what I mean? I’m so happy to be alive, so I’m going to celebrate that tonight.” The camera quickly panned to his taken-aback mom, Damalie Namusoke.

tfw your son ended his oscars acceptance by explaining that you had sex with his father pic.twitter.com/wiZ7j9bNqg

Thomas Vinterberg remembers his late daughter in moving acceptance speech: “This is a miracle that just happened—and you’re a part of this miracle. Maybe you’ve been pulling some strings somewhere, I don’t know. But this one is for you.” https://t.co/sdgeoBK7lX #Oscars pic.twitter.com/ulzde1Acv4

Thomas Vinterberg dedicates his win to his late daughter

The crowd shared in Danish filmmaker Vinterberg’s grief during his heartfelt speech after winning best international feature film. Just four days into filming Another Round, his 19-year-old daughter Ida died in a car crash. “We wanted to make a film that celebrates life, and four days into shooting, the impossible happens. We miss her, and I love her,” he said to the crowd.