Oscars 2019 Recap: The Biggest Moments Of The Night

We watched, so you didn't have to! 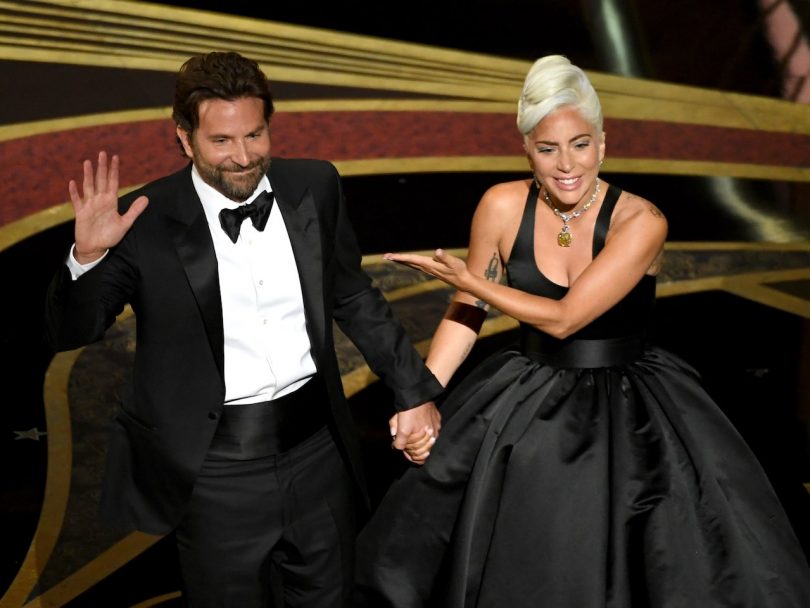 The lead-up to the 2019 Oscars was filled with controversy. From the host debacle to the quickly nixed “popular” films category, there were lots of bumps in the road to the 91st annual Academy Awards. But as they say in showbiz, a bad dress rehearsal means a fabulous opening night — and this year, the Oscars seemed to go off without a hitch (disregarding what you think of the actual award winners!). If you didn’t stay up to catch the whole telecast, here’s what you missed.

For the first time in 30 years, the Oscars were host-less. And honestly, after some less-than-stellar hosts over the past few years, it was actually really great to skip the awkward chit-chat and time-wasting gags peppered throughout the more-than-three-hours-long show. Instead, Queen (with Adam Lambert) kicked off the night with a crowd-pleasing performance of “We Will Rock You” and it was all sorts of awesome to see Amy Adams, Allison Janney and Glenn Close get super into it. 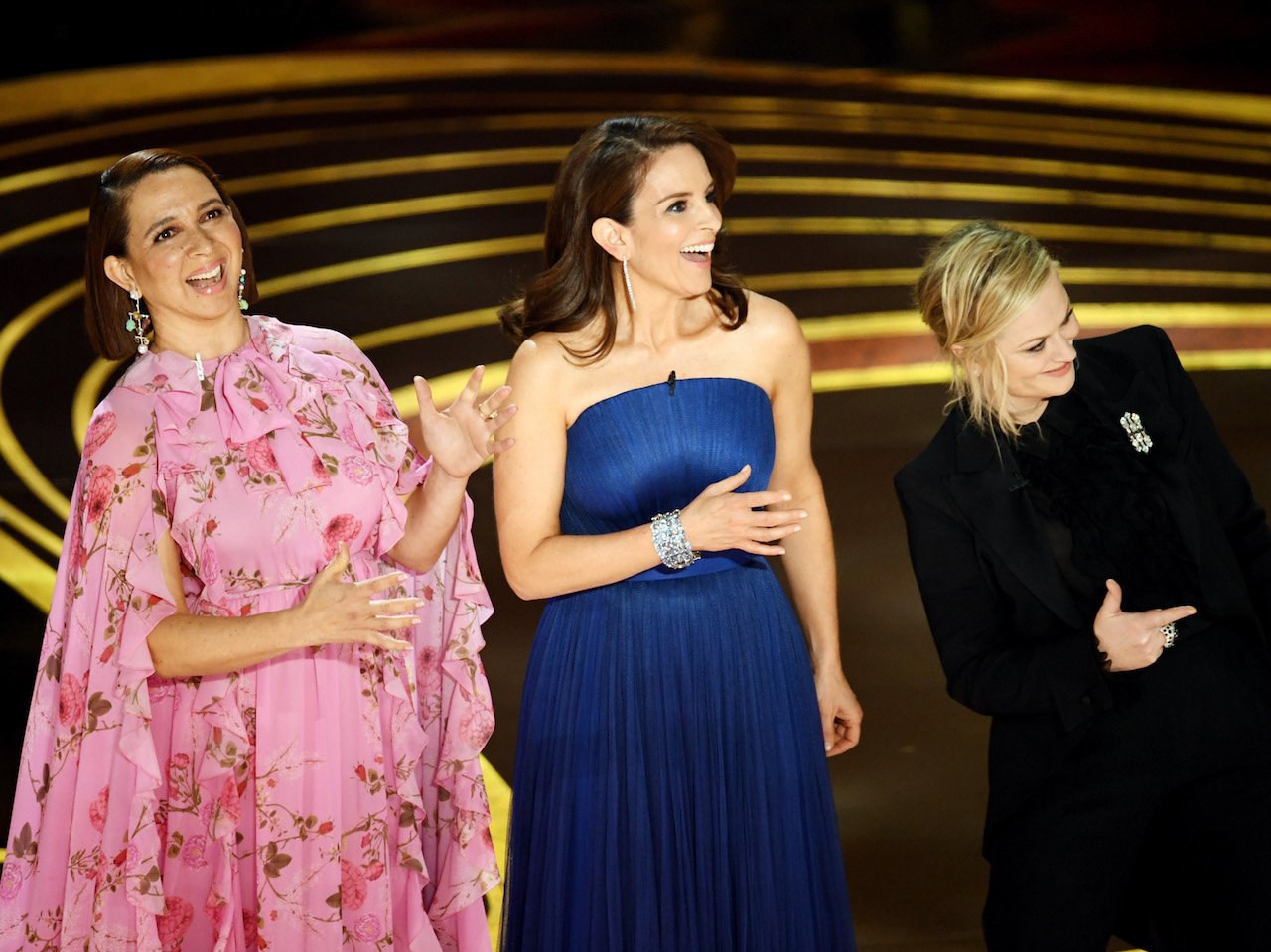 But if there needs to be a host next year, it should be Amy Poehler, Tina Fey and Maya Rudolph

This iconic trio gave out the first award of the night (to Best Supporting Actress Regina King), but as the inaugural presenters, they also did the opening monologue (er, triologue?). They poked fun at some of the nominees, touched on politics and generally made everyone laugh. We already knew Poehler and Fey were amazing co-hosts, but with Rudolph, they reached new heights.

Regina King’s train was making it hard for her to get up the stairs to accept her Best Supporting Actress award, so Captain America stepped up to help. As our friends at FLARE say, he “didn’t walk up with her, or somehow steal her spotlight, he simply — and literally — lent a hand.” 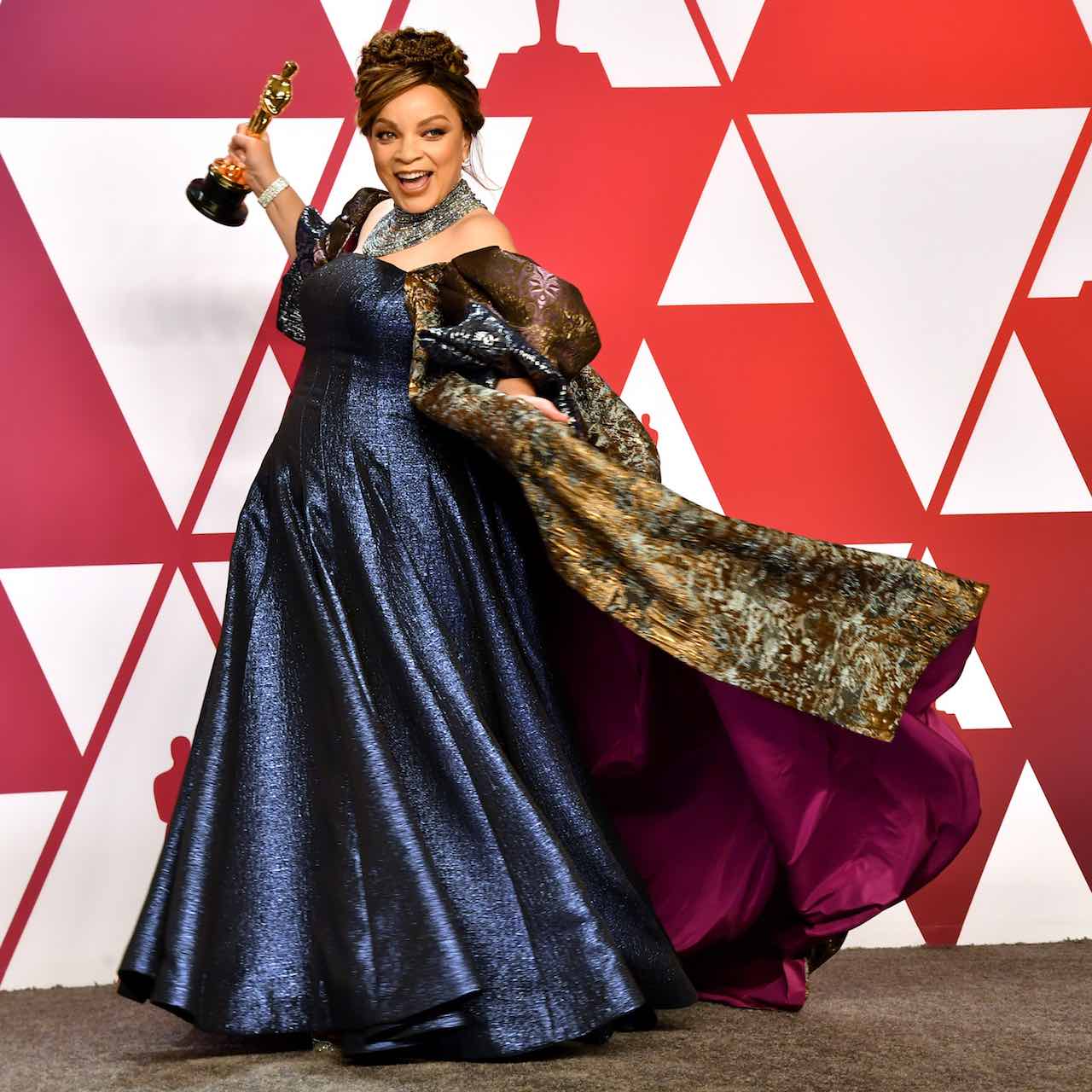 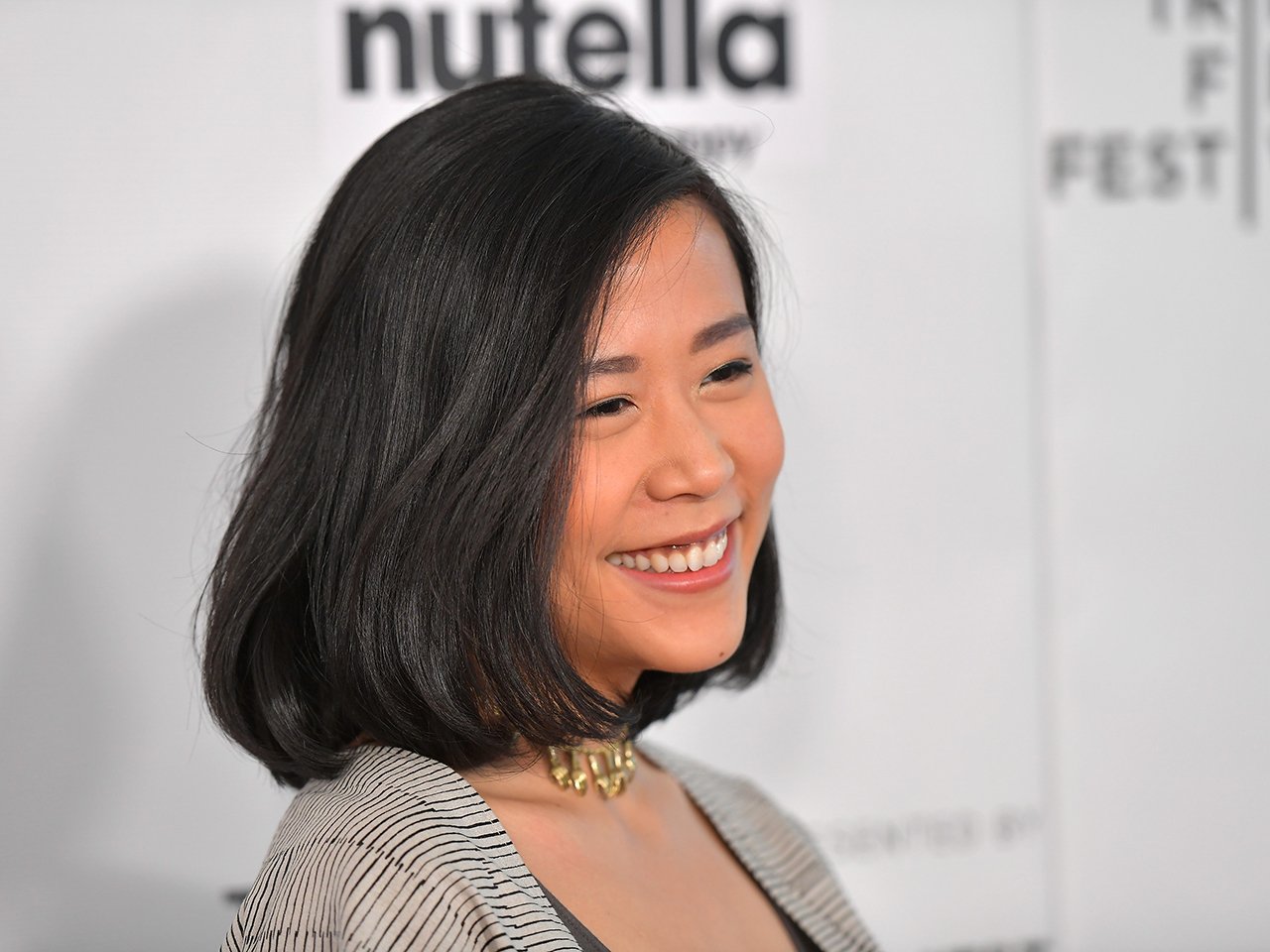 Domee Shi’s Bao was already a winner in our hearts. Shi, who grew up in Toronto, was the first woman to ever direct a Pixar short. And we named her one of our Women of the Year in 2018. Her animated film (which screened in theatres before The Incredibles 2), brought movie-goers to tears as it explored an oft-overlooked part of parenthood. In her acceptance speech for her Best Animated Short award, she thanked her parents and aimed to inspire young women to continue drawing and dreaming. “To all of the nerdy girls out there who hide behind their sketchbooks, don’t be afraid to tell your stories,” she said.

There was more Can-con(ish) on the docket

Who else could introduce Best Picture nominee Bohemian Rhapsody but Mike Myers and Dana Carvey? The two were on stage in character (sans costumes) as Wayne and Garth, which was, dare I say, excellent. 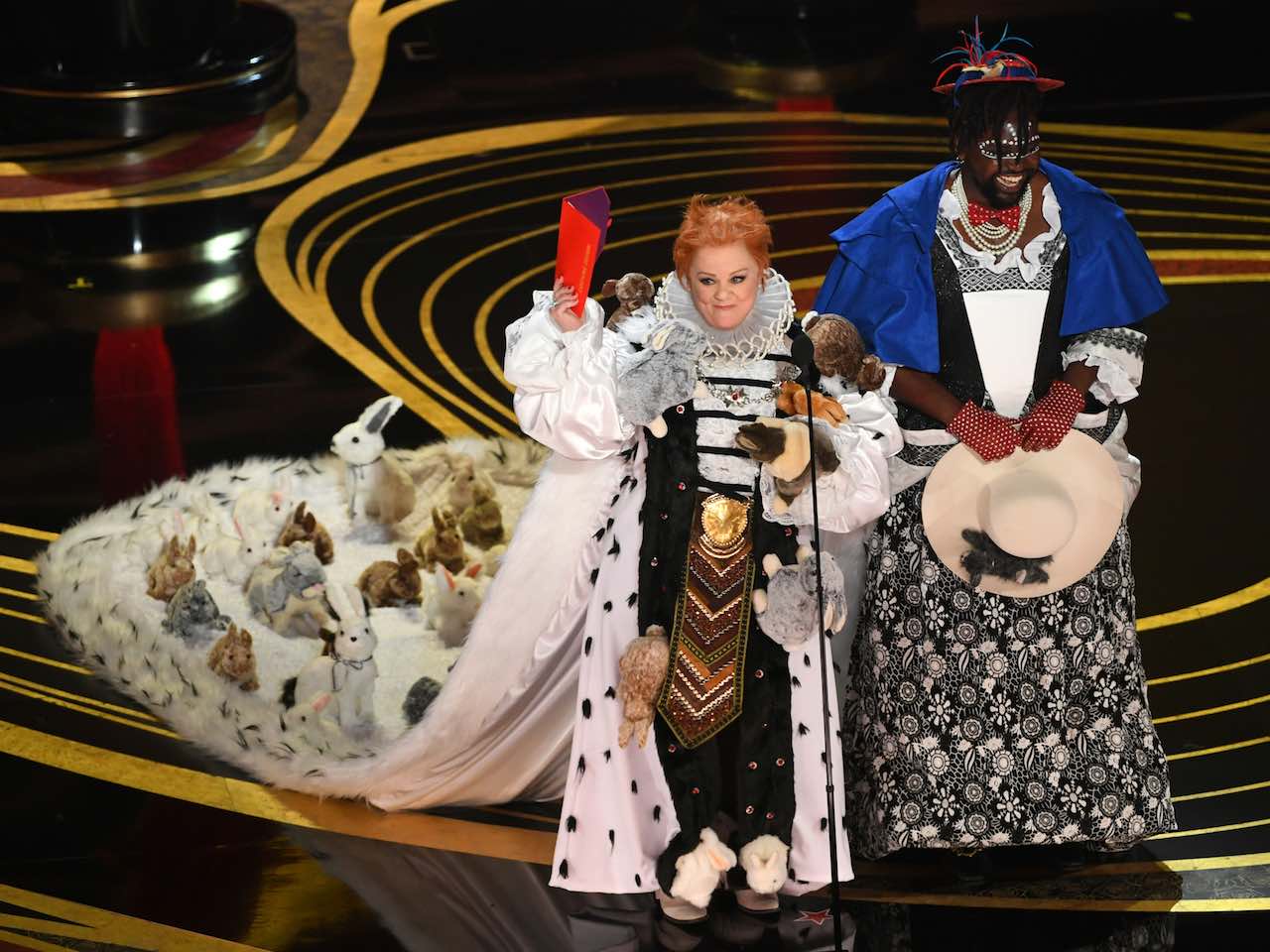 The night wasn’t completely without gags. Melissa McCarthy and Brian Tyree Henry presented the award for Best Costume Design in award-worthy costumes that incorporated elements from the movies in their category. McCarthy’s Elizabethan-inspired getup was covered in stuffed bunnies (including that epic bunny-topped cape) and she even successfully incorporated a bunny puppet into her bit. There was also talk that the Best Actress nominee should host next year.

The Academy recognized a film about periods

Period. End Of Sentence, which follows women in Hapur, Uttar Pradesh, India fighting to end the stigma against menstruation, won for Best Documentary Short. Director Rayka Zehtabchi and producer Melissa Berton might have had the most memorable acceptance speeches of the night. “I can’t believe a movie about menstruation just won an Oscar!” said Zehtabchi. Producer Melissa Berton later continued, “A period should end a sentence, not a girl’s education.” 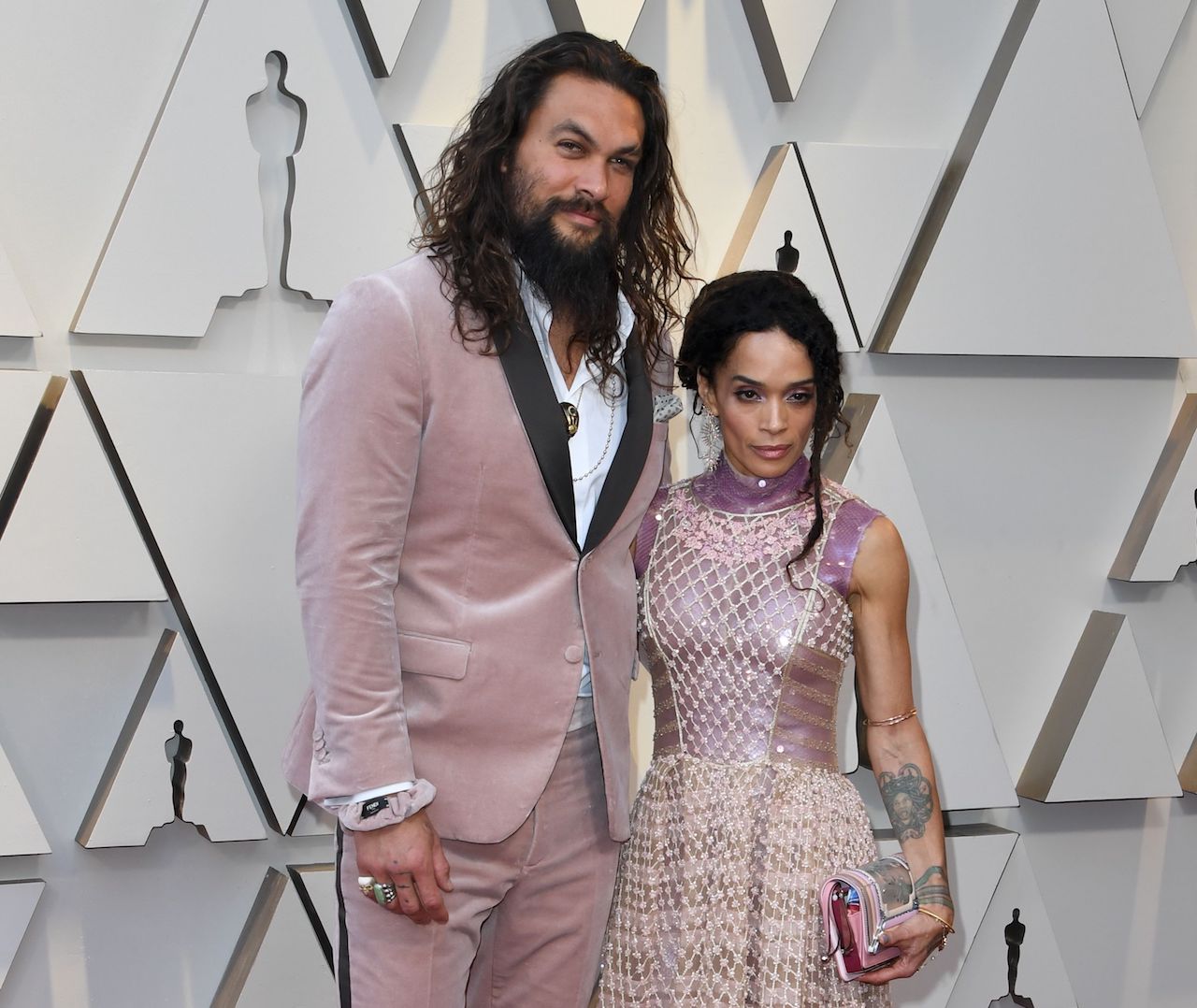 The red carpet was fairly uneventful this year, but one look is well on its way to becoming a meme: Jason Momoa’s scrunchie. The Aquaman star sported the ultimate ’90s-girl accessory — a pink velvet Fendi scrunchie (to match his pink velvet Fendi suit), lest his long locks got unruly during the evening.

The most anticipated performance of the evening was decidedly pared down by Oscars standards, but Lady Gaga and Bradley Cooper didn’t need fancy set pieces or pyrotechnics because sparks were flying all on their own. Their “Shallow” duet was steamier than Tessa and Scott’s Moulin Rouge free dance — that eye contact! That cheek-to-cheek moment at the piano! It was a lot, in the best way possible.

Instead of Emily Blunt (who was decidedly absent), Bette Midler performed “Where The Lost Things Go” from Mary Poppins Returns. The piece itself, which was nominated for Best Song, is kind of meh, but it was a highlight to see Midler at the Oscars. 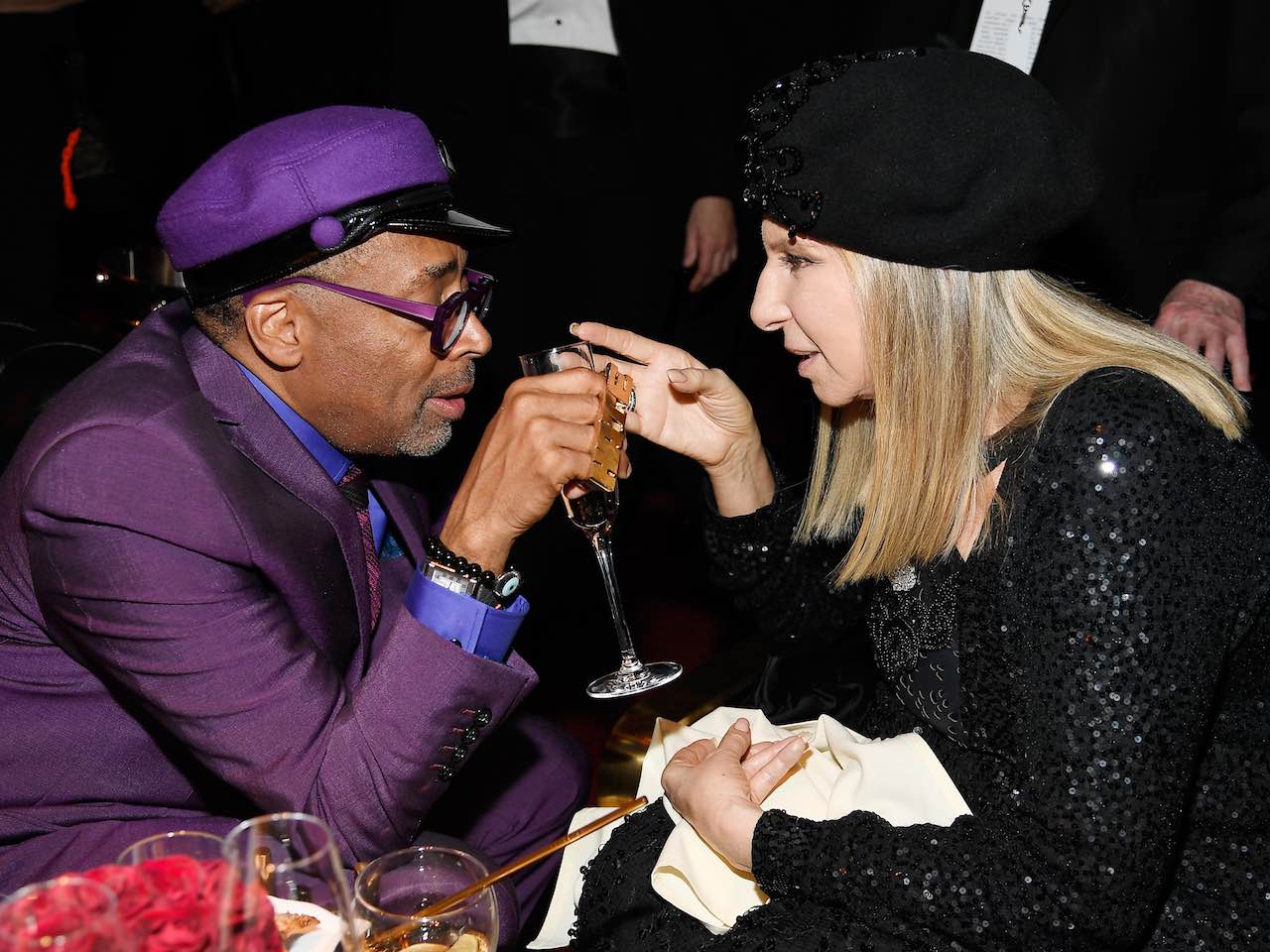 Barbra Streisand and Spike Lee had a moment

Icon Barbra Streisand might have been the obvious choice to introduce Best Picture nominee A Star Is Born, but instead, she graced the Academy with her presence to present Spike Lee’s BlacKkKlansman. Beyond garnering a standing ovation after simply stepping on stage, Streisand revealed she was moved by Lee’s film. She tweeted about it and received a thank you from Lee. In her touching speech, she brought the acclaimed director to his feet when she mentioned that they’re both from Brooklyn and she jokingly pointed out their shared affinity for hats. However, Richard E. Grant’s reaction to seeing Babs might have been the best part of the evening.

There weren’t too many surprises: Rami Malek won for Best Actor (Bohemian Rhapsody), Olivia Colman for Best Actress (The Favourite) and Alfonso Cuarón picked up Best Director (Roma) — until Julia Roberts announced Green Book for Best Picture. While the film had already picked up numerous awards, it’s been a controversial pick, with critics saying it perpetuates a white saviour narrative. There were reports that director Spike Lee (whose film Black KkKlansman was also up for Best Picture) “clearly was furious” about Green Book‘s win, and in a post-show interview he likened what happened to “the ref mak[ing] a bad call” at a basketball game.