Q&A: A date with Eugene Levy

This month, Chatelaine cozies up to the Schitt’s Creek star, proud papa and consummate gentleman. 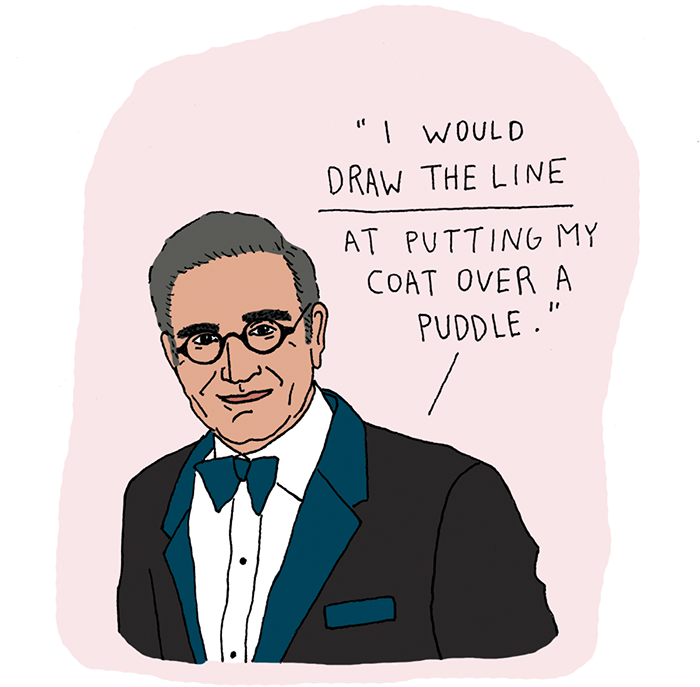 I spoke with your co-star Catherine O’Hara earlier today, and she described you as a gentleman in every way. Is that how you see yourself?
Well, I certainly hope so. I wouldn’t want to see myself as anything but.

Are you a hold-the-door-open guy? Ever put your coat over a puddle in the rain?
Holding the door, definitely, and not just on a first date. I would draw the line at putting my coat over a puddle. She’s on her own.

What’s your ideal date? Dinner and dancing?
Not dinner and dancing, but dinner. My wife and I discovered early on in our marriage that neither one of us likes dancing. When we realized we don’t have to dance if we don’t want to, that was a big breakthrough for us.

Are you familiar with the expression “Netflix and chill”?
Well, I know Netflix, but no. What does it mean?

It’s a modern euphemism. It’s when you invite a date over to watch Netflix and chill, but what you’re really saying is “Let’s hook up.”
Where does the Netflix fit in?

It doesn’t. It’s a guise. Let’s watch Netflix and “chill.”
Oh, okay, so let’s curl up and turn the TV down.

Exactly. Back when you were single, what was your move when you wanted to get amorous?
Boy, that was a long time ago. I don’t know whether I had a move.

Ah, the no-move move.
Yeah. By not having a move, you’re almost subconsciously forcing the other person to initiate a move, which gives you more confidence to go ahead with your second move.

Speaking of Netflix, season 1 of Schitt’s Creek is available there [season 2 is now airing on CBC]. Do you spend a lot of time considering the changing TV landscape?
Oh, you have to think about it. When we are putting our season together, we always have an eye for binge watching. We can now put little things in a show that people will be able to get from one show to another.

SCTV premiered 40 years ago. Any predictions on how we’ll consume television 40 years from now?
It’s probably going to be in some kind of implanted microchip. You can be using your brain and then all of a sudden something will drop in front of your eyes. I don’t know. I don’t know how anybody can watch television on a watch.

Your son, Dan, is the head writer and showrunner on Schitt’s Creek. Does that mean he is also your boss?
I wouldn’t call him my boss. We are partners and I am the senior partner. I don’t want to cross him, though. Down the line, I want him to be able to hire me.

There is a classic scene in American Pie where your character has “the talk” with his teenage son. Did you and Dan ever have a similar exchange?
We did. I remember he was maybe 10 or 11. I started to get into the birds and the bees with young Dan, and he quickly put his hands over his ears and said, “I don’t want to hear about it.” I remember thinking at the time, this is so funny. His reaction was just, “Ahhhhhhhhhhhh.”

What is the best part about working with someone whose diapers you once changed?
It really comes out in pride — realizing that my son is now in show business and he’s extremely talented. It’s hard to describe. I guess another good thing is that he can’t really tell me what to do because I’m his dad.