Based on the award-winning novel by Shyam Selvadurai, the movie is stunning, but has drawn criticism from the Tamil diaspora. 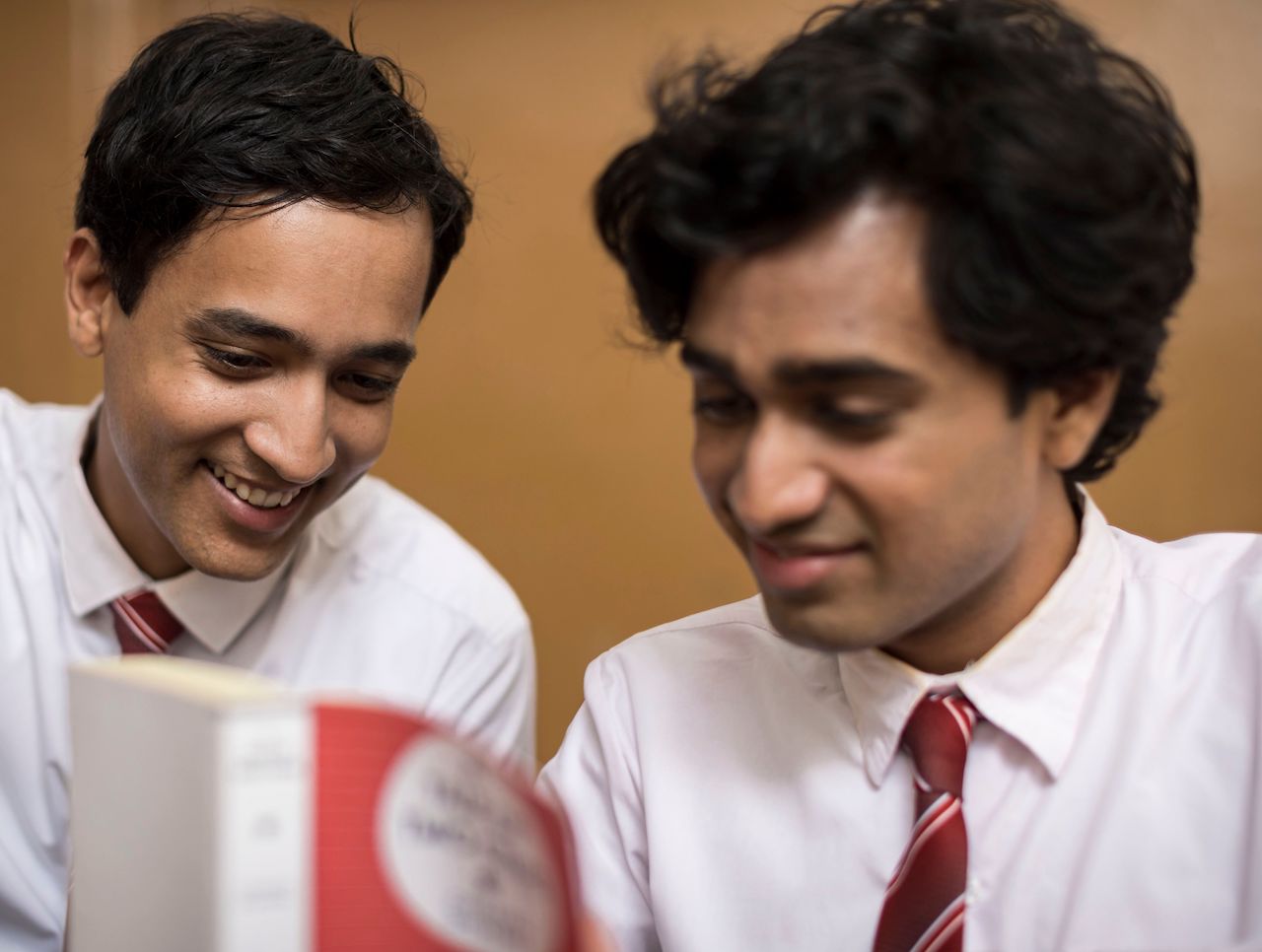 Despite its title, Funny Boy is no comedy.

Based on the award-winning novel by Toronto-based author Shyam Selvadurai, the movie is a coming-of-age story about Arjie, a young boy exploring his sexuality and identity while growing up in an upper-class Tamil family in Sri Lanka.

Set in 1970s and ‘80s Colombo, Arjie’s journey takes place during rising tensions between Sri Lanka’s Sinhalese majority and Tamil minority communities, in the run up to a bloody 26-year-long civil war. Horrific violence between the Sri Lankan army and the Tamil Tiger rebels claimed the lives of an estimated 100,000 people and around 20,000 Tamils remain missing.

The highly anticipated film was adapted by Selvadurai himself, in partnership with director Deepa Mehta, who shot the film on location in Sri Lanka. Lockdown means it won’t be on the big screen in the Greater Toronto Area, but the plan right now is a theatre release in Calgary and Edmonton on November 27. That date coincides with Tamil Remembrance Day, or Maaveerar Naal, an annual event honouring the Tamils who were killed during the conflict.

The filmmakers have high hopes for Funny Boy. It’s being positioned to replicate the success of Mehta’s 2007 Oscar-nominated Water, and has already been submitted for consideration as Canada’s 2021 Academy Awards entry for Best International Feature Film. It’s also been picked up for U.S. distribution by Ava DuVernay’s ARRAY on Netflix.

The film is visually stunning, with raw, tender portrayals of love and scenes of conflict that will stay with audiences well after the credits roll. In many ways, it’s as groundbreaking as the original novel, in its exploration of the complexities and horrors of Tamil-Singhalese conflict while also centering queer love.

But early audiences, in particular those from Tamil communities, have been vocal about what they see as the film’s flaws, and there are some calls to boycott the film entirely. In advance of the movie’s release on CBC Gem, here are a few things to know.

Funny Boy, originally published in 1994, is Selvadurai’s first novel. Though it is not autobiographical, it is informed by his own experience. Like Arjie, Selvadurai grew up in an upper-middle-class family in Colombo, surrounded by relatives.

The author also fled Sri Lanka with his family: during the civil war, Canada became home to approximately 200,000 people from Sri Lanka, the majority of whom are Tamil and now live in the Greater Toronto Area. But unlike his Tamil main character, Selvadurai has a Tamil father and Sinhalese mother.

In the introduction to the 2019 edition of the novel, Selvadurai revealed that scenes of a young Arjie dressing up as a bride, for example, were plucked straight from his childhood. But he also notes that his parents were much more supportive of his artistic interests and sexual identity than Arjie’s family.

“I felt I had to be true to the experience of the vast majority of LGBTQ people, far unluckier than me,” wrote Selvadurai of his novel’s plot. In Sri Lanka, same-sex relationships are still criminalized and individuals continue to experience violence and discrimination.

Tamil-Canadian artist Vinsia Maharajah was confused by the first trailer for Funny Boy. Instead of Tamil or Sinhalese actors that resembled her imaginings of the characters, Maharajah saw a cast that looked generically “South Asian.” The Toronto-based photographer felt that her community’s distinct culture and identity had been erased. She was inspired to create a piece with the message “Don’t erase us,” which she shared on Instagram with a caption addressed to DuVernay and Mehta.

She’s not the only one criticizing Indian-Canadian director Mehta for the lack of Tamil actors. While 50 per cent of the film’s principal cast is Tamil, there are no Tamil actors in lead roles (Nimmi Harasgama, who plays Arjie’s mother, is Tamil and Sinhalese.) In a November conversation with the Canadian Tamil Congress, Mehta said that the two Tamil actors originally cast in the lead roles both dropped out due to scheduling conflicts. Mehta further explained that the casting process took over a year and involved “key film industry players in the Tamil Canadian community.”

Maharajah questions why the filmmaker didn’t publicize an open casting call, like Mindy Kaling did while making her Netflix series Never Have I Ever. She calls the lack of Tamil representation “a huge missed opportunity” for both authentic casting, and working with Tamil artists and creatives.

We discuss why Funny Boy’s language problems hit a nerve with the Tamil community. Listen to the whole conversation here: https://t.co/SLpA2jcGSg pic.twitter.com/RsWije8qfZ

Casting wasn’t the only thing that felt off to Maharajah and other members of the Tamil community. The original trailer, released on October 30, drew criticisms for the authenticity of its Tamil dialogue. In early November, NOW magazine held a roundtable about the film and its controversies, which Selvadurai and Mehta attended. There, Nedra Rodrigo (who founded the Tamil Studies Symposium at York University) pointed out the sensitive nature of language, which has been used as a way of determining whether people are Sinhala or Tamil.

Mehta has acknowledged the problematic nature of the spoken Tamil in the movie. Some of it has since been redubbed, which she told the Canadian Tamil Congress was to “rectify the phonetic mistakes throughout the final film.”

Berlin-based academic and writer Sinthujan Varatharajah has long criticized Mehta for allegedly working with wartime-era Sri Lankan leaders and “a regime that stands accused of genocide” while filming previous movies in the island country. In the past, Mehta has credited controversial Sinhalese politician Mahinda Rajapaksa with helping to shut down protests that stalled her filmmaking. This year, she told the Globe and Mail that her interaction with “the highest of offices” only happened because of mandatory script approval. But at the NOW roundtable, Mehta called the accusations “bullshit,” saying “I’ve never met Rajapaksa in my life.”

Gonna repeat this before tabloids start to hijack & flatten the conversation on my call to boycott #FunnyBoy. This is about holding Mehta accountable for her collaborations & open support of a regime that stands accused of genocide. Representation is the last of our issues here.

Varatharajah is now calling for a boycott of Funny Boy, tweeting that Mehta needs to be held “accountable for her collaborations.”

Maharajah isn’t going to boycott, even though she feels that “this film is going to take up a huge space in our representation, but it isn’t us.” The 26-year-old believes that Funny Boy will become a reference point, a way of understanding Tamil, Sinhalese and Sri Lankan communities, whether or not it’s accurate. So while she’s disappointed in what she saw in the trailers, Maharajah says it’s important to see the film when it is released.

“I want to see as a creator what I can do to bring these stories out more authentically and what can I do to empower and uplift other creators in our community,” she says.