One of our favourite Canadians, Trish Stratus, started her career as a fitness model before joining the World Wrestling Federation. 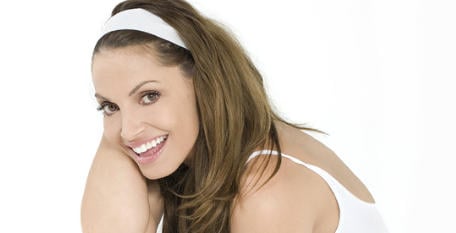 One of our favourite Canadians, Trish Stratus, started her career as a fitness model before joining the World Wrestling Federation. She quickly became one of the most popular and successful female wrestlers of all time, winning seven WWE Women’s championships and being named the WWE Babe of the Year and Diva of the Decade. After leaving the wrestling world, Trish made yoga a central part of her fitness routine. Here, she shares her tips and tricks for living a SweetFit life.

Q: How did you first get into yoga?

A: When I was a little girl, my mom would put on a yoga record and we would do yoga in my living room. That was my first experience with yoga. I suffered a herniated disk during my wrestling career, and yoga was recommended as rehabilitation.  So I took a 20-year break, but I got back to it.

Q: When did it become part of your everyday life?

A: After making a full recovery, and getting back to the ring, I was on the same gruelling schedule — 300 days on the road. But, it seemed more manageable with yoga as a part of my daily routine. I continued to practice on the road and had some of the best performances of my whole career during this time.

Once I retired from the ring in 2006, I continued to study yoga and eventually I pursed my certification in the Ashtanga discipline. In 2008, I opened my own studio (Stratusphere) so I could provide a platform for people to find some balance in their life. I found that if I disconnected for even an hour a day — the way yoga allows me to — I can approach anything head on.  I wanted to be able to let people discover that.

Q: How does yoga compare to wrestling?

A: Yoga and wrestling are obviously very different, but having both in my life offered a sort of yin and yang effect. One practice helped me appreciate the other; yoga allowed me to be a better wrestler and a better performer. Believe me, my body definitely appreciated my yoga class after coming off the road from a wrestling tour.

Q: What advice would you give someone who wants to live a healthier lifestyle?

A: Keep a nutrition journal. It’s a great way to help you realize what’s working in your diet and it keeps you accountable. It’s the one tool that I always recommend to people who are looking to start making changes in their eating habits. I’ve used one consistently for more than 10 years, starting back in my fitness days. Recording everything will give you the best chance to get fit and eat more nuTRISHionally — pun intended!