What Is Gaslighting? The Manipulation Tactic Explained

Gaslighting can make someone doubt themselves at the core, and leave them questioning their own identity. 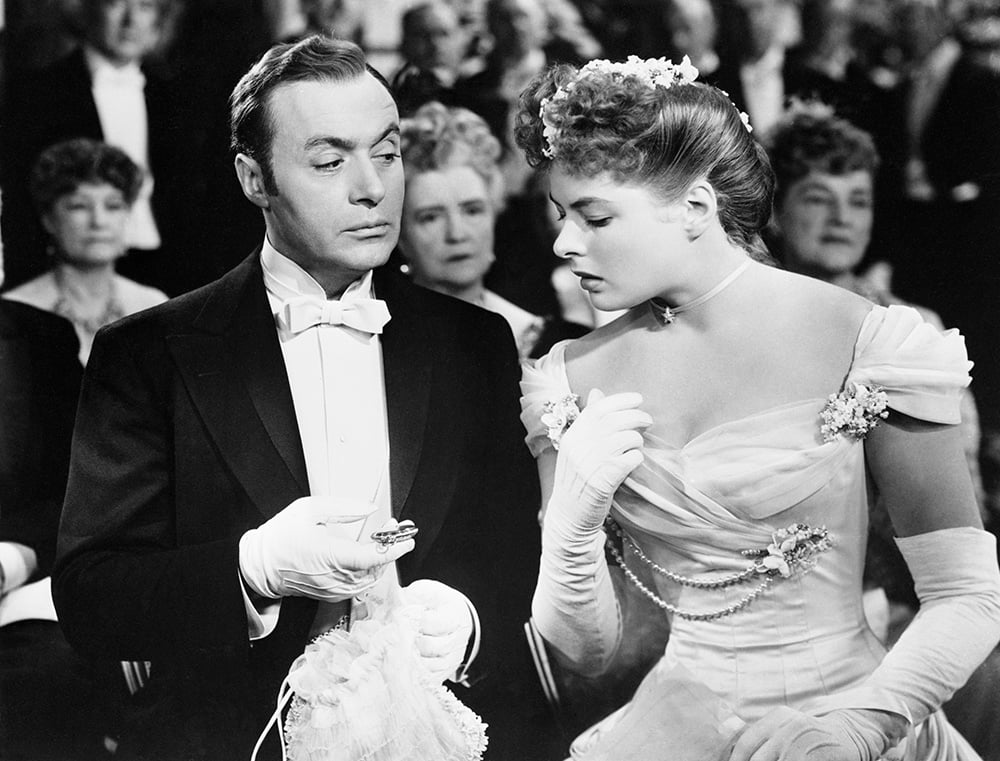 Charles Boyer and Ingrid Bergman in a scene from the MGM film Gaslight. (Photo: Getty Images)

Have you ever had someone try to deny your perception of reality by telling you that what you’re experiencing isn’t real? This can be an indication of a psychological manipulation tactic known as gaslighting. Gaslighting has become a popular term over the past few years, with online usage of the word increasing steadily since 2013. Most of us have likely experienced gaslighting at some point in our lives, but it can be hard to identify because it leaves its victims doubting themselves. When left unrecognized, though, it can have a devastating long-term impact. Here’s what you need to know about gaslighting.

Gaslighting is a form of emotional or psychological abuse where an individual (or in some cases, a group) makes someone question their perceptions of reality—including their memories and thoughts and the events taking place around them, says Dr. Joti Samra, a Vancouver registered psychologist who holds a Ph.D. in clinical-forensic psychology. In other words: To gaslight someone is to make them doubt whether what they’ve experienced is actually real. Gaslighting can happen to anyone, but according to a 2019 report from the American Sociology Association, gaslighting often exploits “gender-based stereotypes and structural and institutional inequalities.” Those might include tactics like associating “femininity with irrationality.” If you are the person on the receiving end, it’s common to feel a strong sense of confusion and self-doubt.

“The ultimate goal of gaslighting is that by being so scrutinized and invalidated in their opinions, perceptions, thoughts and feelings, someone is taken totally off balance, and they lose a sense of themselves,” says Maria Schmid, a registered psychologist in Calgary. It can make someone “doubt themselves at the core,” and even have them questioning their own identity. She says perpetrators of gaslighting are often deeply insecure and have a fear of being powerless, so they feel the need to exert dominance over someone else in order to keep themselves elevated.

Where does the term “gaslighting” come from?

In 1938, British playwright Patrick Hamilton wrote a chilling thriller called Gas Light, which was made into a popular movie in 1944. Throughout the film, a husband pushes his wife to question her own sanity by making her think she’s having delusions, so he can commit her to a mental institution and steal her inheritance. He secretly dims and brightens the gaslights in the house and makes strange noises at night, and when she brings it up, he tells her it’s all in her head, dismisses her and makes her doubt reality. He carefully cultivates an environment of uncertainty, leaving her in a constant state of anxiety. This is where the term “gaslighting” was born.

The film successfully captures the longtime tradition of equating aspects of femininity with madness. As far back as ancient Greece and Egypt, the concept of hysteria was specific to women. The origins of the term come from the Greek word “hystera,” meaning uterus. According to an article from McGill University, “hysteria was basically the medical explanation for ‘everything that men found mysterious or unmanageable in women.’” Claiming women were “hysteric” was a way to dismiss their fears and anxieties by deeming them invalid, or, by gaslighting.

Paulette Senior, CEO and president of the Canadian Women’s Foundation, which funds programs that address women’s issues such as gender-based violence, says the film depicts what gaslighting can actually do when it comes to controlling someone else’s perception of reality. “It’s a really great characterization of what happens in emotionally abusive situations,” she says. “Even though this film was made in the ’40s, it’s still very much relevant today.”

Where can gaslighting take place?

In 2018, Oxford Dictionaries announced that “gaslighting” was one of the most popular words of the year. This was the same year the world watched Dr. Christine Blasey Ford come forward against now-U.S.-Supreme Court Justice Brett Kavanaugh with a sexual assault allegation. Throughout her testimony in front of the Senate Judiciary Committee, all aspects of her traumatic memory were dissected and questioned. Her story was categorically denied by Kavanaugh, who claimed he was never at the party where she said the assault took place. This dismissal was then echoed by Republicans on the committee, Kavanaugh supporters on social media and former president Donald Trump.

Gaslighting takes place in all the systems that touch our lives, especially when race and gender come into play, says Senior. It is embedded in the bureaucracy involved with reporting rape or sexual assault, which can discourage victims from coming forward. “If you try to go to the institution that you would expect to get justice, the way that it plays out in court can be quite oppressive,” says Senior. She says questions from police and defence attorneys such as, “Are you sure that happened?” and “What were your actions?” are commonly pointed at assault victims to sow doubt in their minds. Victims’ family and friends can also make them doubt themselves unintentionally by questioning them, she says. “It could lead a woman who has experienced sexual assault to be completely re-victimized. [It could] deepen her vulnerability and [have her] feeling as if her memory is false.”

While gaslighting often targets individual victims, it can also be implemented on a much larger scale, as a method of political control. Donald Trump is “the most salient example [of gaslighting] that we’ve all had over this past year,” says Samra. Whether he was spreading misinformation about the COVID-19 pandemic, or refusing to admit defeat after the 2020 election, Trump pushed his narrative with a sense of conviction that made people believe him. In this way, gaslighting takes lying to a new level by completely redrawing reality, instead of just covering something up. “There’s often some element of real confidence and assertion when someone is gaslighting … they say it as if they believe it, [and] they say it in a way that everyone around them believes it,” says Samra. By continuously denying the public a foundation of truth, Trump gaslit his way out of accountability throughout his presidency.

Who is affected by gaslighting?

The impact of gaslighting is more devastating for people who are marginalized in society, such as people who are racialized and/or part of the LGBTQ+ community, says Senior. “If you’re someone in society with less power, the impact can be greater, because the possibility of you being believed is a lot less,” she says.

How can you recognize gaslighting?

Gaslighting is meant to disorient and confuse the victim, making it difficult to realize it’s happening to you.

Victims of gaslighting are often wracked with anxiety and lacking self-confidence, says Samra. This plays out with the victim internalizing the gaslighter’s narrative, by always thinking they’re too sensitive or that everything they do is wrong. When gaslighting takes place in intimate relationships—for example, someone repeatedly cheating but then making their partner doubt themselves for suspecting it—victims will commonly make excuses for the gaslighter. Samra says the victim will hide things or try to cover up the acts of their abuser out of embarrassment, which often results in them isolating themselves from their friends and family. Over time, she says this isolation combined with anxiety can “seep the energy out of you.”

There are certain indications that can point to someone being the victim of gaslighting in their relationship. Schmid says if someone is always speaking in a self-deprecating way or putting themselves down, they could be echoing the words of their gaslighter. They may not even realize this until someone else points out that they’re being overly critical of themselves, she says. It can help to ask someone who is always harsh on themselves why they feel that way, to help them determine if those are really their thoughts, or the thoughts of someone else.

How can you combat gaslighting?

If you believe you’re being gaslit, it’s important to find a place to express your thoughts and feelings openly. “You want to speak with people who know you and who believe you,” says Senior. If you’re having to defend your own experience to someone, then that’s not the right person to be talking to, she says. It’s important that you don’t confide in the person who’s been gaslighting you about your insecurities, because they will likely use them against you, says Schmid.

Whether it’s speaking to someone you trust, or writing your thoughts down in a journal, expressing yourself honestly will help you deal with the anxiety that’s caused by gaslighting. Documenting events as they happen is also important, says Senior. This way, you’re not relying solely on memory, and you have tangible documentation of what took place. Over time, gaslighting can seriously damage your sense of identity, so you may want to seek professional support for rebuilding your confidence and dealing with the relationship that is the source of the issue.

The most important thing to remember is that you are not the issue, says Senior. “If you’re being gaslit, it’s not a reflection of you. It really is about the abuser, and their need for power and control.”

If you are dealing with any form of abuse while at home, the Canadian Women’s Foundation has an online signal for help, which is a one-handed sign someone can use on a video call to flag that they need help. Here is a list of resources in Canada for people in abusive situations.