Everything You Need To Know About Rapid COVID-19 Tests

And how they’re being used in Canada. 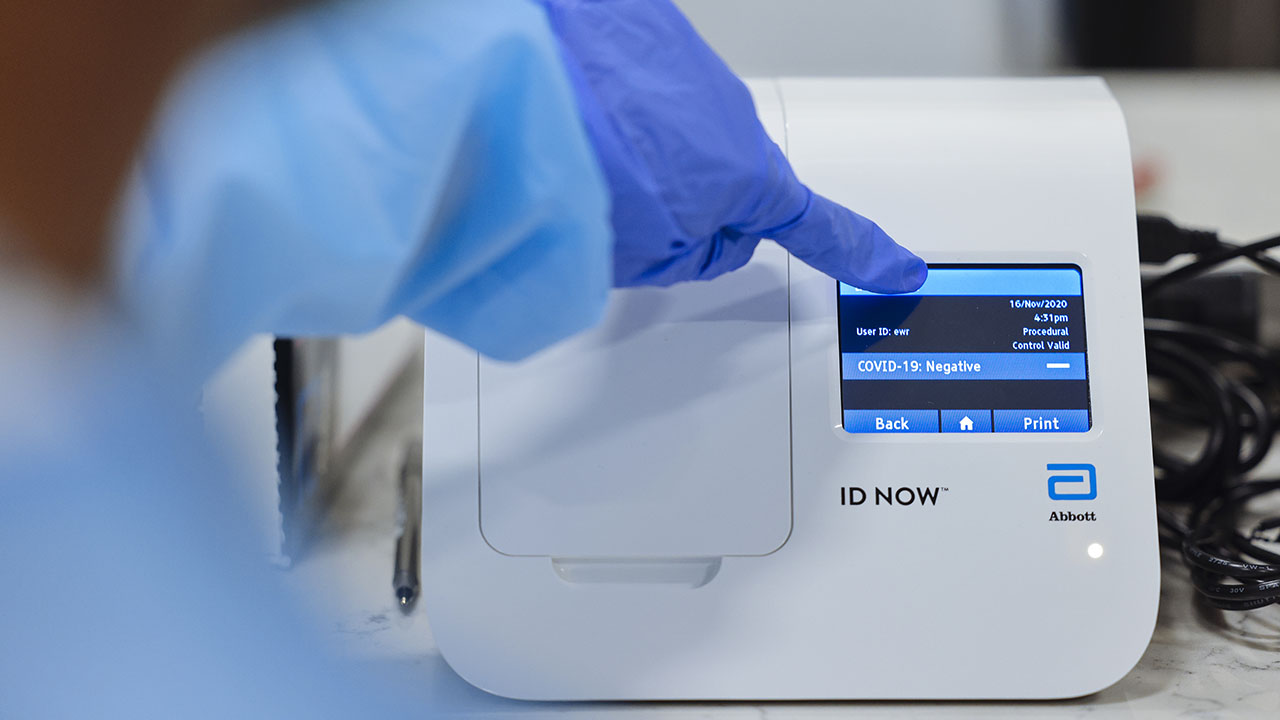 A negative Covid-19 test result on an Abbott Laboratories ID NOW rapid test machine during a pilot program in Newark, New Jersey, last November. These rapid tests are in the early days of being used in Canada. (Photo: Angus Mordant/Bloomberg via Getty Images)

Canadian provinces are just starting to receive and use rapid COVID-19 tests, which can offer results in as little as 15 minutes.

Nova Scotia is offering them to asymptomatic people, specifically targeting 16- to 35-year-olds in an effort to combat community spread. Quebec plans to use them in one region north of Quebec City where cases are skyrocketing, and at Montreal’s Trudeau Airport. Ontario has deployed them in areas of high transmission, rural and remote areas, in long-term care homes and in select workplaces. British Columbia and Saskatchewan will also be using them in pilot projects to screen long-term care and health-care workers. Alberta is using them in shelters, select testing centres and remote communities. Manitoba is letting teachers use them in a pilot project to begin in January, after first deploying the tests to remote communities.

If the provinces’ various strategies seem a bit haphazard, it’s because doctors and public health professionals are still trying to understand the effectiveness of these tests. Early studies suggest that they are less sensitive than the polymerase chain reaction (PCR) tests more commonly used across Canada, and must be used under the strictest of conditions to get the best results.

“Every test has its pros and cons,” said Dr. Rob Kozak, who has a PhD in microbiology and immunology and is a clinical microbiologist at Toronto’s Sunnybrook Hospital. “We all want a perfect test, but there’s no such thing. To get a test that’s simple and straightforward and fast, you have to trade something.”

“It is better to have a test that isn’t perfect but we can use rapidly, versus no testing,” he said.

Even though Ontario Premier Doug Ford has called rapid testing “an absolute game changer,” experts like Kozak are much more cautious. They agree that these tests can be effective—and are fast—but there are logistical challenges: because there are a limited number of these tests available, they have to be used at the right place on the right patients by the right people.

Here’s everything you need to know about rapid COVID-19 tests.

What exactly are rapid COVID-19 tests?

There are two types of rapid COVID-19 tests that have been approved by Health Canada. The first is Abbott Laboratories’ ID NOW, a molecular test that detects the virus’ genetic material, most famously used at the White House—although not well.

The second is the Panbio COVID-19 antigen rapid test, which detects the virus protein and acts “like a pregnancy test,” Kozak said. Rather than sending the sample to a lab, test administrators can just place them into a tube with some liquid and then drip it on the Panbio device to get a result.

Both these tests require nasal swabs and can process those samples in the same place a patient is tested. Both produce results in 15 minutes. For comparison, the “gold-standard” PCR testing device currently used across Canada takes at least a day to provide results, but can process 100 samples in an hour.

How do these rapid tests work?

The ID NOW device is not a portable test. It is a large bench-top instrument that is “kind of stationary once you put it down,” said Dr. Larissa Matukas, an infectious disease physician and medical microbiologist at St. Michael’s Hospital in Toronto. It requires its own dedicated space, she said, “ideally its own room, free of foot traffic.” Meanwhile, the PanBio is an individual device that can be carried to the patient. Both tests are known to work best when the temperature is between 15 to 30 degrees Celsius.

Both tests also require that patients are tested within seven days of presenting symptoms, according to Dr. William Stokes, a microbiology and infectious disease specialist with Alberta Precision Laboratories. “And, if you don’t [process] it within the hour (of collecting the sample), your accuracy diminishes quite dramatically,” he said. “So, get it right away and do it on the spot.”

In light of these requirements, doctors worry about the administration of these rapid testing devices. Experts say they need to be operated by someone with medical training who can recreate a lab setting to ensure they are used properly to produce the best results. They must wear personal protective equipment and adhere to biomedical safety regulations, which includes administering the nasal swabs and also carrying them to the devices. These samples also then have to be safely disposed of after testing, so that there is no inadvertent spread to the people who are doing the testing or contamination of the environment.

“If we roll these out too quickly for too many people, it might cause more harm than good,” Stokes said, noting that a rapid roll-out without sufficient training and monitoring could lead to administrative mistakes. “You could start getting positives that are not really positive and negatives that are not really negative. It could create some chaos.”

How accurate are these tests?

Stokes has been leading a validation test—a study to make sure a medical test works for the patients it is designed for—of both rapid tests in Alberta since October. The study recently concluded, with what he describes as “the best results in Canada at the moment,” on their accuracy.

The study, which will be published later this month, collected swabs from 133 COVID-19-positive patients to test the ID Now test, finding widely similar results. Of these, 62 patients had exhibited symptoms within seven days, only one of which tested negative on the ID NOW test and positive on the standard PCR test.

The accuracy of the Panbio test was found to be 88 percent in agreement with the standard PCR test in people exhibiting symptoms for less than seven days. “Of the 100 patients that you test, 13 will be missed by this test,” Stokes said.

On the basis of these results, Alberta has validated these rapid tests for use, but Stokes stresses that they have to be used “in the right population” noting that “their performance was most accurate on those tested soon after presenting symptoms.”

Dr. Monika Dutt, a physician in Nova Scotia, said the accuracy of the rapid tests largely depend on the extent of COVID-19 spread in a region and why the test is being used: whether it’s to decide treatment or for broad screening among people with no symptoms. Nova Scotia, for example, is setting up mass pop-up clinics with the rapid antigen tests. Any positive results are then sent for additional testing using the standard PCR system to be reconfirmed.

“No testing is perfect,” she said. “So often, where I work, if there is a positive I go through a lot of steps to make sure this is truly a positive because there are so few cases.”

Who can get these tests?

As of November 29, Canada has shipped more than 5.5 million rapid test instruments to all the provinces and territories, with millions more expected in the months to come. Because of the limited availability of these tests in Canada and the fact that they are designed to be used more frequently than PCR tests to stay ahead of viral spread, Matukas believes they should be “used in very targeted populations to use this supply in the best way possible.”

“The global supply chain just doesn’t allow us to use (the rapid tests) at the capacity that would make them game-changing,” said Matukas. “My personal opinion is that our current high accuracy [PCR test] instruments are actually the best thing that we have available to us, and we should be investing in more of [them].”

Right now in Canada, rapid tests can’t be requested or bought by individuals, and public health authorities are picking the spots where they can be most effective. They recommend the ID NOW test be used in remote settings where lots of people need to be screened, such as homeless shelters and homes for disadvantaged people and communities far away from central laboratories. It can also be used as a diagnostic test for patients presenting with COVID-19 symptoms.

The Panbio test is best used to confirm asymptomatic cases, or people who don’t present with COVID-19 symptoms and have not been in contact with anyone with the virus. This is ideal for regions with low virus spread and to determine an outbreak.

While several provinces are looking to deliver these tests to nursing homes, which continue to be one of the sites hardest-hit by the virus, doctors worry that the tests could also create added stresses for the already thinly stretched staff. “The problem with nursing homes is there’s so many,” said Stokes. “If we add this additional complexity to their system, maybe that will cause more chaos.”

Will rapid tests strengthen Canada’s response to the pandemic?

The problems with standard PCR testing—long wait lines at some testing centres, delayed results, overwhelmed laboratories—will still persist even with these rapid tests in usage.“The longest delays aren’t in the [PCR] test procedure itself, but in getting the sample from patient to lab and back,” said Matukas. “And that’s the key thing we can invest in to streamline the process.”

The assessment centres are often far away from testing laboratories, which are often located in metropolitan centres. This means a lot of time is spent securely storing samples and transporting them over long distances. Most of the laboratories are also working at full capacity if not beyond it to meet the demand, so processing PCR samples takes time, as does reporting the results to every single stakeholder—from patient to public health—who are each on a different online system.

“There are all of these factors that actually need to be considered, and the only factor that I hear about is how fast they are,” Matukas said.

Dutt agrees: “I think rapid testing is a really important tool, but there are so many other pieces [needed in Canada’s pandemic response], including some of the bigger pieces that we don’t always talk about: supports to make sure people can stay home when they’re sick, income so that they can still support themselves when they may not be able to work. All of those pieces are just as if not more important.”