What I Learned When I (Begrudgingly) Started Meditating

Research says mindfulness decreases pain and stress. How hard can it be? Editor Kathryn Hayward finds out for us. 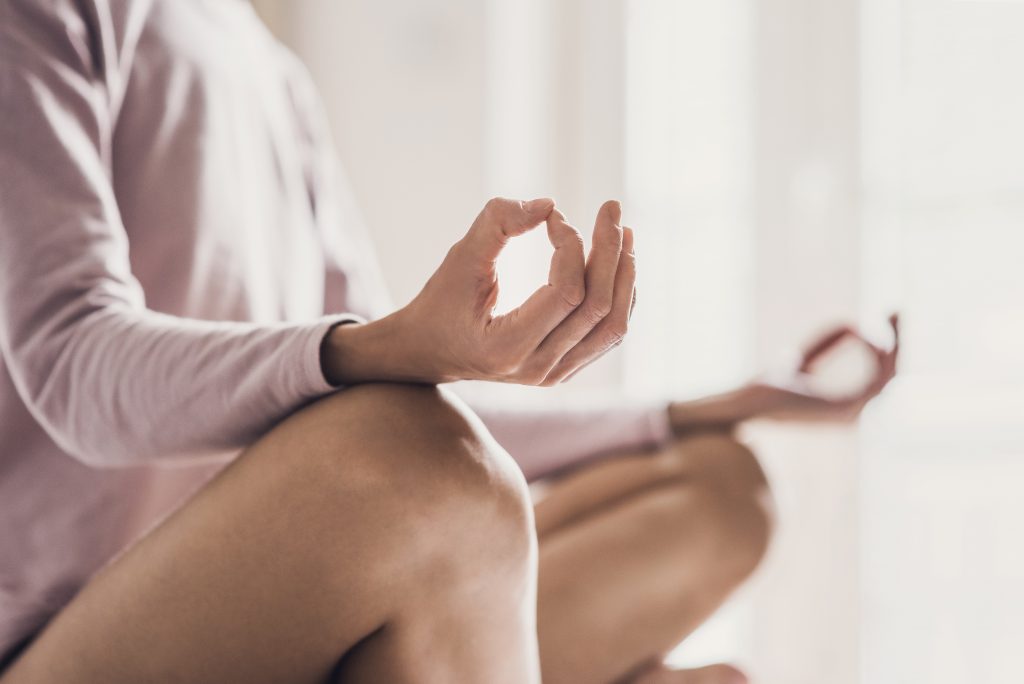 “Allow the mind to rest on the breath, not letting yourself get caught up in thoughts,” the voice purrs in my earbuds, from my meditation app.

“The moment you realize you’ve been distracted,” the voice continues. “Just bringing the mind back again…”

It’s hard to stay focused when the meditation instructor’s grammar is so messed up.

You know who else is breathing right now? Former Raptor Kawhi Leonard. He’s probably much better at concentrating than I am.

My motto has always been: Why waste time doing one thing when you could be getting three things done? A proud multi-tasker, I used to take this more-is-more approach to an absurd level. Once, feeling particularly productive, I caught myself thinking about seven things at the exact same time, eight if you include the tallying up of thoughts. But the mind has a way of playing tricks on us. Was I really thinking about eight things, or was I simply spinning through my Rolodex of worry?

Wanting to try to find a little more space in my mind, I begrudgingly began to meditate. I was highly sceptical, so I started small: I made myself sit down a few times a week and concentrate on my breathing.

To my surprise, it wasn’t pure torture. In fact, I started sleeping better. I decided to take things up a notch. I started to meditate for longer periods of time and generally try to be more mindful outside of meditation. Instead of being glued to my phone on the subway, I’d focus on my breathing. Whenever I’d sit down, I’d concentrate on precisely what that felt like. I’d analyze the glorious flavour explosion of every single Nerd candy (don’t judge—they are delicious) I ate in minute detail. As Catherine Phillips, a psychiatrist in Edmonton told me, “Practising mindfulness briefly throughout the day is going to have an effect on your neural development — it’s going to have an effect on your capacity to self-regulate.” I set a goal of soon being a superhero of self-regulation.

Sometimes my 30-minute meditations were great, and afterward I’d be raring to apply my laser-like awareness on the world. Other times, the guide’s charmingly chipper British accent on my app would become insufferably smug—and I’d start checking what time it was every 45 seconds. (I’m pretty sure reading e-mail, mid-meditation, is the wrong kind of contemplation.)

There was a week when it all seemed to click. I’d be fretting about the amount of plastic in our oceans or replaying my embarrassing attempts at small talk—but then I’d be able to catch myself before my mind disappeared down its rabbit warren of worry and shame. I still worried, but I was no longer consumed by it. I felt lighter yet stronger.

Then my nascent ability seemingly evaporated over night: I completely zoned out when my daughter was telling me something that was no doubt very heartfelt and important. I snapped at a man-bunned barista for no reason. And there was that time on the subway, when instead of mindfully breathing my own business I tried to pull Jedi mind tricks on a woman playing Candy Crush on her phone. (Move the red candy. The red candy right there. Right. There.)

“The brain is a very complicated apparatus, and the mind—whatever its relationship to the brain is—is even more amazing.” So says Jon Kabat-Zinn, the founder of the world-renowned Mindfulness-Based Stress Reduction Clinic at the University of Massachusetts. To get to know it intimately, he said in a lecture “may be the hardest work in the world.” That might be an over-statement, but it is far more challenging than I thought possible.

I have much to explore and many things to learn, but I’m curious to keep going. Meditation has afforded me glimpses of just how chaotic the mind can be. And how, with lots of practice, it’s possible to develop an ability to navigate that chaos. “Progress isn’t linear,” Phillips assures me, making me feel better about my Candy Crush slip-up. “The idea is we work with ourselves exactly as we are on any given day.” I’m going to go all Scarlett O’Hara on this one: Just as tomorrow is another day, the next moment is another chance to try to be more present.

Where was I… breathing in….

Kathryn Hayward is a fortysomething senior editor and a mom of two.