Have you had the experience of gaining back what you lost — and more — after ending a strict diet? Find out why it happens and what you can do to prevent it 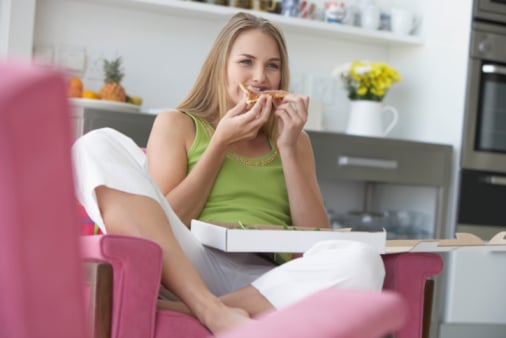 It seems like everyone wants to lose a pound a day (or more), but not only is this not realistic, it can blow up in your face. Sure, kill yourself with lots of exercise and go on an extended, ultra-low-calorie diet and you will lose weight rapidly — for a time. But it won’t be sustainable and you’ll quite likely end up gaining the weight back, and then some.

Want to know why these diets fail? Back in the 1940s, when people were more tolerant of being guinea pigs, Ancel Keys conducted the Minnesota Starvation Study (actually, the participants were conscientious objectors to WWII). Thirty-six men were subject to an extended period of 50 percent of their maintenance-level caloric needs (the purpose was to learn about how to medically deal with impending starvation as a result of the war — it wasn’t just a lark). As a result of participation, the men’s metabolic rates dropped significantly — partially due to loss of body mass, but also due to an evolutionary advantage where the body uses fewer calories during lean times.

This is known as the “starvation response”. It doesn’t sound like much of an advantage now, when you can order pizza any time of day, but back when the hunt failed or there was a drought it sure came in handy: it kept people alive. Another metabolic response programmed in by evolution via natural selection is called “poststarvation hyperphagia.” I asked my wife (a family physician) what hyperphagia meant, and she replied with: “pigging out.”

See, after a period of starvation a hormonal response causes people to overeat way past what it takes to replace the lost weight, usually gaining more than what they lost in the first place. In the bad old days of rampant food shortages, this extra fat protected them against the next time that food was in short supply. Today it just causes yoyo dieting, where the dieter ends up fatter than when they started.

Seriously cutting back calories (below 1,500 per day for a man and below 1,200 per day for a woman) day after day can cause the starvation response, where your metabolism slows down. Then later you get the “hyperphagia”, where you lose all control of your appetite.

Several days of moderate to moderately high caloric deficits, and even the occasional short fast, are not going to cause a starvation response, especially if your caloric deficits are at least partially attributed to adding in a bunch of physical activity.

So how do you prevent the starvation response?

Not restricting calories once a week is largely about the psychological benefits of not feeling deprived. If you’re being careful you can have caloric deficits every single day, as long as it’s not making you crazy. When you’re focused on weight loss, having one day each week where you break even, calorically speaking, isn’t really critical to preventing starvation response. Remember that starvation response comes from actually starving yourself, not cutting calories wisely. Instead, it’s just a useful tool in being able to stick to a weight loss focused diet.

Have you ever tried crash dieting? What were your experiences? Please share your thoughts here.