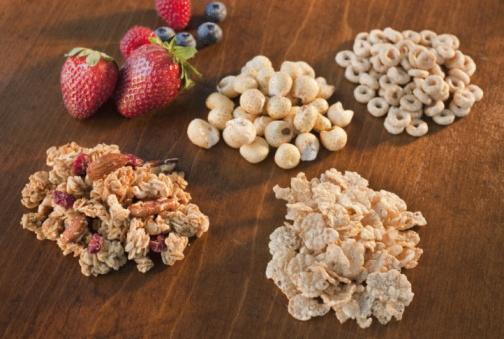 The breakfast aisle can be baffling, and for good reason: While some cereal is a great way to stock up on fibre, vitamins and minerals, it can also be a minefield of hidden calories, sugar and sodium. To make your mornings a little better, we’ve rounded up the five healthiest breakfast cereals. To make the cut, they had to be an excellent source of fibre (at least six grams), low in sodium (less than 140 mg) and contain less than 10 grams of sugar per serving – and they had to list a whole grain as the first ingredient.

1. Post Shredded Wheat
There’s a reason this decades-old cereal remains a favourite: It contains just one ingredient – 100% whole-grain wheat. As a result, it boasts something few other cereals can – zero grams of sugar and salt. Dress it up with low-fat milk, fresh blueberries and a tablespoon of ground flax for a well-balanced morning meal.

2. PC Blue Menu whole grain instant oatmeal with inulin
Starting the day with a fibre-rich breakfast is an easy way to keep hunger at bay and shed extra pounds. Adults need between 25 and 38 grams of fibre per day, yet most Canadians continue to fall short, eating less than 14 grams per day. With six grams of fibre per serving, this hot cereal contains 50 percent more than most other instant oatmeal products, thanks to whole-grain rolled oats and inulin, a type of soluble fibre from chicory root.

4. Bob’s Red Mill 8 grain hot cereal
It can be a daunting task to find a breakfast cereal that contains one whole grain, never mind eight! This hot cereal blend from Bob’s Red Mill contains oats, brown rice, corn, soybeans, millet, barley and flaxseeds. That variety delivers a range of nutrients, including vitamin E, iron, selenium and magnesium, as well as disease-fighting antioxidants. Prepare it with low fat milk or calcium-fortified soymilk, and sprinkle with fresh berries for a satisfying breakfast.

5. Alpen Apple Spice
This new cereal from Weetabix gets the thumbs up on the nutrition front – it contains 15 percent of the recommended daily intake of iron and magnesium. We also like the simple ingredients: whole wheat, barley, rolled oats, brown sugar, dehydrated apples and flax seed. Serve this cereal with a source of vitamin C, such as orange juice or sliced strawberries, to help boost your body’s ability to absorb the iron from the whole grains.