What 12 days on the Wild Rose cleanse is really like

Our assistant editor Dominique Lamberton said no to dairy, wheat and alcohol for 12 days and lived to tell the story. 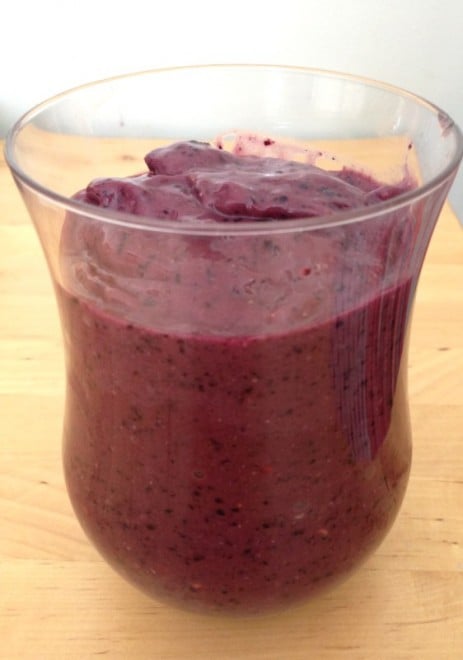 My favourite smoothie from the cleanse.

The day before I began a 12-day herbal detox I drank a Caesar and ate a full eggs-and-bacon breakfast before 10 a.m. Granted, it was the morning of the Olympic gold medal hockey game between Canada and Sweden — but the Monday following felt like as good a day as ever to kick off a period of healthier, more conscious living.

It’s a 12-day herbal cleansing program designed to enhance metabolism and support the liver and intestines to promote proper digestion and eliminate toxins and waste. The promise? A dramatic increase in energy and overall feeling of well-being, according to the materials in the kit.  So what’s involved? A diet heavy on almonds, brown rice, fish, garlic, ginger, onions and herbal tea is complemented by three varieties of herbal tablets and an herbal-extract tincture that are to be taken twice daily. Other acceptable foods over the 12 days include most vegetables (with the exception of mushrooms), some fruits (apples, berries, stone fruits, like cherries, plums and nectarines and lemons), lean meats, unsweetened almond milk, tahini, eggs, coffee, beans, whole grains, tofu, nuts and seeds (with the exception of peanuts) and herbs. What can’t you eat? Basically all dairy and flour products. Oh, and I almost forgot: No alcohol.

So why give up all the good stuff for 12 days?

I wanted to rethink my eating habits (the 3 p.m. sweet treat run was becoming a bit too routine) as well shed a bit of my holiday/winter weight. I had been meaning to find the time for a program like this for a while (the problem is, as a social twentysomething living in downtown Toronto it’s hard to find a 12-day stretch free of any food-and-drink-centered engagements). It’s easy in theory to say, “I’m going to start eating healthier today!” but there’s nothing stopping you from sneaking a cookie here or a package of Skittles there. My thought was that a regimented program like this one would keep me in line and hopefully instill some healthier habits. So after the victorious hockey game I took a trip to the grocery store to stock up. Into my cart went the majority of the produce department, as well as almonds and pepitas from the bulk section, some chicken breasts, unsweetened almond milk and frozen berries. I had already purchased the Wild Rose detox kit (around $40) at a health food store. That night, after eating one last gummy candy for good measure, I went to bed feeling ready to take on the next 12 days. Here we go!

Right away I know that breakfast is going to be tough. I usually begin my day with Greek yogurt, some fruit and a piece of toast. So with the yogurt and toast out of the question, that leaves fruit. But I can’t just have any fruit I want (bananas, for example, are not recommended). Luckily, here at Chatelaine HQ, we have a green-juice delivery three days a week, to which I have signed up for Mondays. I enjoyed my green juice (usually an elixir containing any combination of kale, spinach, pears, apples and ginger) on day 1 with some berries and a black coffee, which, surprisingly, I have found I don’t mind (I usually take it with a splash of milk.) The first four days were the toughest. While the cravings weren’t crazy, I did find myself hankering for a smattering of feta on my salad or a piece of fresh naan to accompany my lentil curry. And while I won’t divulge details, trips to the bathroom had increased (to be expected, I suppose, when taking an herbal tablet called Laxaherb). But the worst part was the feeling of fogginess that came every afternoon. Basically, I just felt out of it. I was also a little bit anxious in the evenings — my heart sped up a touch, and a mild tightness gripped my chest. Slightly wary of these symptoms, I consulted Google and read a number of reviews from others who’ve done the detox, and learned that I was not alone. People seemed to say that after day 5 it was smoother sailing.

The reviews were right, and I woke up on day 5 feeling refreshed, and by the afternoon there was no cloudy, “out of it” feeling. But a new challenge presented itself: the weekend. During the workweek I happily prepared my supper every evening, making extra to take to work for lunch the next day. But the weekend is when my friends would be going out to eat, drink and be merry. It was my friend’s birthday on Friday, so the gang was going to a bar — a bar where there would be dancing. I was feeling rather unenthusiastic about going, fearing that I would feel out of place on a dance floor surrounded by all of my happily tipsy pals. But as soon as we got there I was energized by the pop hits and my fun-loving friends, and danced until last call. It was invigorating to dance the night away without a sip of alcohol! And it felt even better to wake up hangover-free on Saturday morning. A food update: New favourites include dressings made with tahini, garlic and lemon and crunchy pepitas sprinkled over everything. I’m having fun experimenting in the kitchen, and while I do miss cheese and pasta, I’m satisfied with the food selection and my culinary creations. The thing I missed the most, actually, is balsamic vinegar. Salads with lemon juice and olive oil are nice, but get a bit dull after a while. Another great discovery: Cacao powder added to smoothies gives them a chocolate-ice-cream taste — okay, maybe that’s a stretch, but let me have this one!

By day 9 I had become totally used to this kind of living. People would ask me how it was going and I’d have to think for a second before realizing they were referring to the detox. I snacked on blueberries, almonds and sliced apples sprinkled with cinnamon and dipped in almond butter. I enjoyed delicious, varied dinners and took advantage of the healthy takeout options near our office. In terms of energy I haven’t noticed a huge difference, but I’m not being hit by the afternoon slump anymore. And my jeans are definitely a bit looser! I’m mostly feeling pretty darn accomplished and pleased knowing that I am capable of eating clean and healthy without feeling too tempted by the no-go foods (not to say there aren’t temptations; just ask my roommate who came into my room holding out the jumbo bag of Smartfood on the afternoon of day 6 – torture!). While I’m already planning my first post-detox meal (Saturday morning brunch) and looking forward to having my morning Greek yogurt again, I know that I’m going to be more conscious of what I’m eating from now on. Would I do it again? Absolutely. I really like how this feels. (And tahini and cacao powder, you’re not going anywhere.)

Have you ever tried the Wild Rose program? Tell us about it in the comment section below.