Why plant-based eaters like Lauren Toyota turn to nutritional yeast for cheesy, nutty flavours without a drop of dairy. 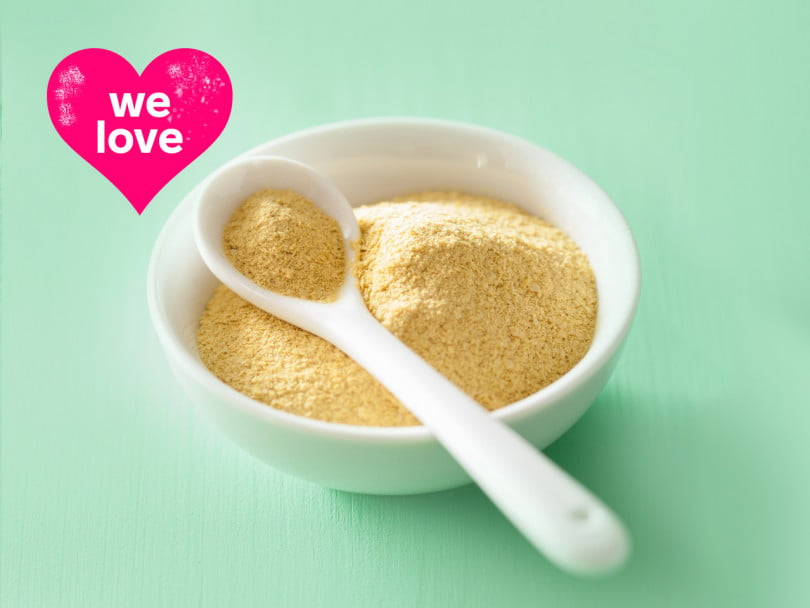 It smells like fish food—and looks like it, too. But nutritional yeast (or “nooch”) has become a must-have ingredient and pantry staple, especially in plant-based and vegan cuisine, because it’s an umami-rich flavour enhancer. Popular Canadian vegan vlogger Lauren Toyota of hot for food  uses nutritional yeast in many of the dishes she creates, including in more than 30 recipes in her cookbook Vegan Comfort Classics, as does our test kitchen when developing plant-based recipes (like our plant-based Caesar salad!).

What exactly is it?

It’s similar to the yeast used for bread, but it won’t make dough rise because it’s inactive. As Bon Appetit explains, nutritional yeast is pasteurized and dehydrated saccharomyces cerevisiae—the strain also known as baker’s yeast. Look for it in your local grocery store’s health food section (many carry the Bob’s Red Mill brand). Bulk Barn, as well as most health food stores, also sell nutritional yeast in bulk. That way, you can buy a little to try it out before investing in a larger quantity.

Nutritional yeast is prized for its almost cheesy flavour, making it a wonder ingredient for vegans and those who avoid dairy. Don’t think of nutritional yeast as a cheese replacement (that role goes to fermented nut cheeses and faux cheese slices). Toyota says she uses it in any dish that’s supposed to be creamy and savoury, including in her cashew-based dressing, French toast batter and her favourite nacho cheese sauce.

“Nutritional yeast is in almost everything I make, but it goes undetected. You’d almost never know it was there,” she says. “To someone who doesn’t eat vegan all the time, they wouldn’t know it was part of the ingredients, but they would wonder—how does this taste so tangy or rich?”

To see if you like the flavour, try sprinkling nutritional yeast on your popcorn, along with oil (olive or coconut), chili powder and salt. Or, use it to add some cheesy flavour to your roasted broccoli and cauliflower.

Best of all, these yellow flakes are known as nutritional yeast for a reason. Along with being a decent source of protein, many brands of nutritional yeast are fortified with vitamin B12. Since B12 is naturally found in animal sources such as meat, fish, dairy and eggs, many vegans have to take a B12 supplement in order to get enough of this vitamin that helps make DNA and red blood cells.

However, if you overdo it on the nutritional yeast, don’t be alarmed if your urine turns neon yellow. Nooch is also filled with riboflavin (vitamin B2) and your body can only absorb so much before you pee the rest out.