Don’t Be Afraid Of Your Cast-Iron Pan: Here Are 4 Easy Ways To Start Using It Every Day

It will do all the heavy lifting in the kitchen if you let it. 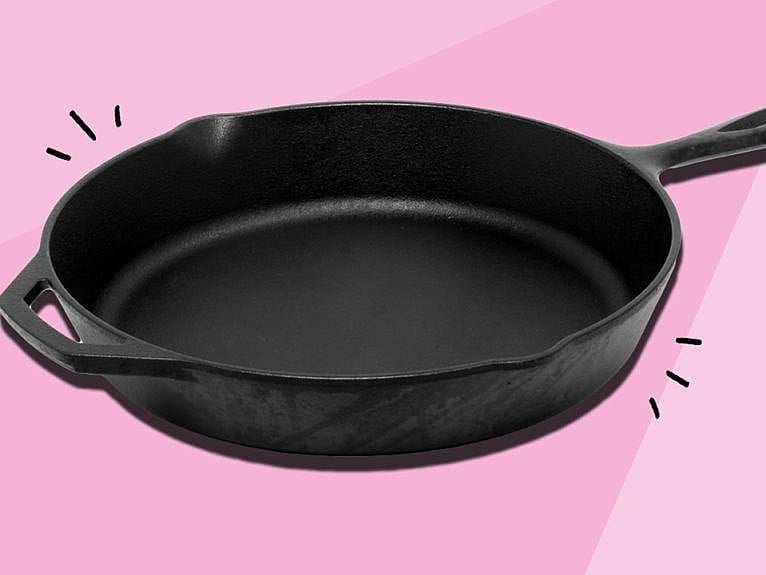 Don’t be nervous about using a cast iron pan in the kitchen—these glorious skillets are one of the best kitchen tools you’ll ever buy. They can cook everything from crispy-edged, sunny-side-up eggs and bacon, to fluffy cornbread, perfectly seared steaks, caramelized vegetables, winter roasts, spicy stir fries and much, much more.

The secret—and once you’ve nailed it, you’ll want to give away your other frying pans (not joking)—is in the seasoning. What’s seasoning? It’s fat polymerization: oil, paired with high heat, transforms the surface of the pan, leaving a thin, non-stick film that’s chemically bonded to the iron surface.

But that doesn’t mean you’re stuck with a high-maintenance tool. Sure, if it’s brand new (or you’ve pushed it so far back into the cupboard you’re not quite sure if it’s rusty or just dusty), a little pre-seasoning won’t hurt. But in general, it’s just about using the pan.

It’s that simple—the more you use it, the better it gets. Here are four easy ways to cook in a cast iron pan that will help build the non-stick seasoning (and your confidence):

If you’re cooking a steak indoors, cast iron is the way to go. It will give you that restaurant-level sear on your steak that no other pan can quite replicate. In fact, if all you use it for is searing steaks, that will still help build the seasoning. (And turn out great steaks at home, every time.)

While flaxseed oil is touted as the best oil for seasoning, plenty of other oils will season your pan. Bacon will release lots of fat into the pan and boost that finish, while delivering perfectly crisp slices to go with your breakfast pancakes.

Char and caramelize vegetables for easy side dishes

Cast iron can get veggies cooked quickly on weeknights, when there’s very little time for slow-roasting. Try making caramelized carrots in an oiled pan, or char broccoli florets in a dry hot pan to a tender-crisp finish. The iron retains and radiates heat to cook the vegetables quickly, while creating a golden-crisp finish on the outside.

Bake With A Cast Iron Pan

If you have a pot of chili going on the stovetop (or in the slow cooker), whip up cornbread batter to bake in an oiled cast iron pan. (Another benefit to cast-iron is it’s totally oven proof, and retains heat long after you take it out of the oven, so you can serve fresh, warm cornbread right out of the pan, all through dinner.)

A really hot, thick cast iron pan can be used in place of a pizza stone, when making more artisanal-style pizzas.

I have an enameled cast iron pan, does this apply to me?

The enamel coating takes away the need for seasoning, while leaving you with most of the other benefits this workhorse tool has to offer. There are a few caveats, however: your enameled pan will never develop the non-stick finish of a really well-used, seasoned cast iron pan, and enamel is prone to cracking when exposed to very high heats, particularly when empty (not the case with regular cast iron).

Watch: How To Clean A Cast Iron Pan (And Keep It In Good Condition)

Built to last, it’s incredibly hard to ruin a cast iron pan. Got rust? Scrub it down and season it in the oven, then you’re ready to start cooking with it again. The best way to keep it in good shape is to know how to clean and lightly re-season your skillet. These simple steps keep your pan rust-free and evenly seasoned, ready for the next dish!

1. Brand new pan? Clean it with soap and water, and dry off.

2. Season it. Even if it came pre-seasoned it’s recommended. It will help give it extra protection (and lessen sticking).

3. Clean it after every use. Hot water, a nylon scrub brush, and a touch of soap (if needed) will do it.

4. Re-season it. Make it part of the clean-up process. Once clean, return to a hot burner, adding oil once pan is heated through. Wipe oil over pan with paper towel, and continue heating for a few minutes. Turn off burner. Your pan is ready to use again later.