Does Italian-Canadian Food Have An Identity?

It's known for red-sauce joints, pizza traditions and decades-old neighbourhood delis, but what truly defines Italian-Canadian cooking is its history—and current reality—as an invitation-only affair. 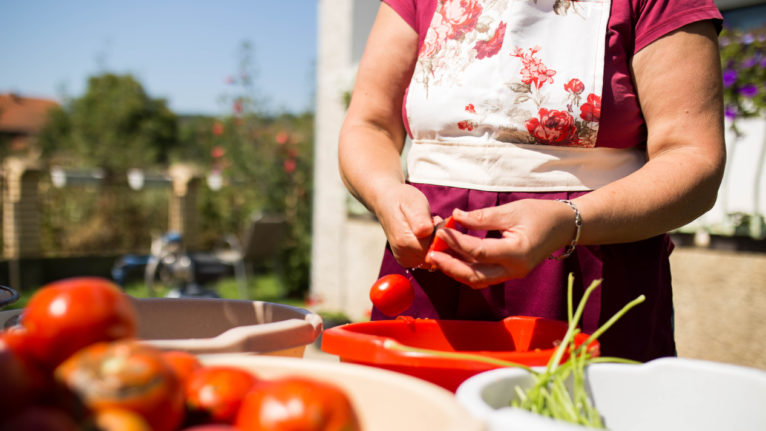 It’s like this in a lot of places with a large Italian population, at the time of year when tomatoes have peaked in season and preserving their sun-kissed, off-the-vine flavour is an urgent task. Italians will set up shop in garages and laneways, crushing tomatoes by the bushel full to be poured into cans and enjoyed throughout the winter. (Or, maybe, throughout the next winter; there’s often a little left over from the year before.) It’s usually a neighbourly affair, with close-knit families commiserating about this year’s harvest over Mason jars—and usually a bit of homemade wine, too.

Woodbridge has the largest Italian population of any city in the country. According to Library and Archives Canada, there are approximately 1.4 million people of Italian descent living in Canada, which accounts for about 3.7 percent of the country’s total population. When you close in on the Greater Toronto Area, that rate skyrockets: According to the 2016 census, 8.6 percent of the GTA’s ethnic population is of Italian descent.

In Woodbridge, that number is closer to 50 percent.

“I always joke that if you looked into the sewer grates in Woodbridge, they’d be full of tomato water,” says Alida Solomon, chef and owner of Tutti Matti, a Tuscan restaurant in downtown Toronto. Solomon was born in Toronto’s Forest Hill neighbourhood, and spent several years fine-tuning her craft in Italy after graduating from George Brown’s culinary program. “I know so many people who are not Italian who go to Italian people’s houses in September, because they have the machinery, they have the know-how. I call it driveway sauce.”

The driveway sauce tradition is not exclusive to Woodbridge, which is about a half hour north of Toronto, but it is emblematic of Canada’s Italian-Canadian culinary tradition, in that it exists primarily within the home. While Italian-American cuisine is well-known for a culinary tradition that has taken root in the public arena, manifesting as iconic red-sauce joints, hotly contested regional pizza traditions and decades-old neighbourhood Italian delis and greengrocers, what truly defines Italian-Canadian cooking is its history—and, in many ways, current reality—as a strictly invitation-only affair.

In the United States, Italian-American cuisine has a distinct identity, and a slightly longer history than ours in Canada. Italian-American immigrants began establishing their culinary culture in the early 20th century, which was solidified as American soldiers returned from the Second World War with a taste for oregano and pizza. Canada’s wave came later—the largest one took place between the 1950s to 1970s—and centred largely in metropolises like Toronto and Montreal. The new community worked to amalgamate with Canadian society at large, while maintaining tight-knit social ties within the Italian diaspora: according to Teresa Lobalsamo, who teaches Italian Studies at the University of Toronto, communities like Woodbridge were, at first, places where new immigrants could simply hang out.

“So Corso Italia, or your various Little Italies, were social communities before they were business communities,” Lobalsamo says. She notes that, over time, businesses within those communities were established whose primary purpose was to serve residents: bakeries, greengrocers and other stores specializing in foods that reminded Italians of home.

But the community, deeply rooted as Italians are in hospitality and sharing food, branched out to serve non-Italians, as well. “In order to make money and business based on food, they went with this homogenized version of Italian cuisine,” says Lobalsamo. Which is to say, the pizza and red-sauce pasta that Italian immigrants knew Canadian palates—which had as recently as the 1930s been taught that garlic was forbidden—would appreciate.

“But, in private, they didn’t. They were still making what would typically be consumed back home.”

“In Canada, what it means to eat regional Italian food has its own distinct flavour that…is actually dependent on individual households.”

My mother was born in the Italian province of Treviso, in a teeny tiny little town called Casacorba. In 1959, when she was four years old, she, her parents and elder sister emigrated to Guelph as part of a significant wave of immigrants from the region at the time. We weren’t close to my father’s family growing up, so I was raised almost exclusively by Italians. And, as anyone in a similar position will be able to attest, Italians raise you by feeding you. I grew up eating the most perfect green beans in spring, the best tomatoes in summer, and the most carefully pulled-from-the-pod Romano beans in the fall. Then, in the winter, there was more of that—but from cans.

I didn’t realize until much later in life that the food I was eating at home—and it was always at home—was the result of an almost puritanical approach to cooking and eating that emphasizes the right ingredients over the right technique, and celebrates seasonality with fervour. Rich, bitter risotto prepared with radicchio leaves, stewed salt cod served atop polenta, and hefty gnocchi smothered in a ragu of braised veal. In the Italian-Canadian home, the season is reflected in the vegetable garden. And there’s always a vegetable garden.

“I think if there is one tradition that [Italians] brought to Canada, other than preserving, it’s [food] gardening,” Solomon says. “Italians are able to create these magical places, even in the middle of the city.” There is a reverence towards the food that is grown at home (specifically, at your home), and a respect for the seasonality of it that, for second-generation Canadians like myself, results in an unconscious bias towards home-cooked being the best—and a distrust of anything else.

“If I go out to eat, I would not generally go out for Italian food,” says Flavia Asnaghi Nicastro, a flight attendant living in Toronto. “I just think that, if it’s Italian food, I can make it at home. I would rather try something that I can’t do myself.”

There is actually a pervasive sense among Canadians—non-Italian and Italian alike—that Italian food belongs in the home kitchen. According to a 2017 survey, Italian cuisine topped the rankings of foods Canadians would rather cook at home than order at a restaurant, with 73 percent of Canadians indicating it as their preference (the cuisine most Canadians would rather eat at a restaurant than prepare at home is Chinese). This could be because Italian food is comfortable to a surveyed population more comfortable with European standards in home cooking; on top of that, Italian food is also, fundamentally, simple: cucina povera, or peasant food, being the genre of some of Italy’s most famous dishes. Or it could be because there is a sort of hangover from the early days of Italian restaurant development, in that most Italian-Canadian restaurant food is still a bland, North Americanized facsimile of Italy’s exceptionally varied, truly regional cuisine—much unlike East and South Asian restaurant culture, for instance, which has moved well beyond the North Americanized versions of their respective cuisines and into very regionally specific categories.

It’s probably all of the above. And, at any rate, the latter is changing—just ask Solomon who, after all, has successfully run a Tuscan restaurant in downtown Toronto for almost 20 years. “In the beginning, it was really difficult to serve traditional Italian peasant food, because it’s not pretty! Especially in the winter,” she says. “And we do things in season. But people have come around to it.”

Still, the truly varied nature of Italian cuisine is not even close to being readily available on a commercial basis—through no fault of anyone who’s tried. “Canadian traditions of Italian food are, generally, Southern-based,” Solomon says. And in Canada, what it means to eat regional Italian food has its own distinct flavour that, rather than varying from neighbourhood to neighbourhood, is actually dependent on individual households.

Asnaghi Nicastro’s parents are from Naples and Rome, two different regions of Italy, and as such she was raised eating a diversity of dishes with a variety of passed-through-the-ages secrets from various Nonnas. The same goes for Lobsalamo: her parents are both from the South, but not the same region: her mother is from Puglia, which celebrates rustic dishes such as focaccia Barese and vegetable-forward pasta dishes, and her father is from Campagna, known for limoncello, fresh seafood and Neapolitan pizza.

I have never in my life seen another person of Italian origin use as much butter as my own northern Italian Nonna used in her cooking. Where a traditional bolognese might use a cup of milk, for instance, hers would use the equivalent measure (if not more) in butter. And while this is not “authentic” to any region of Italian cuisine whatsoever, it is essential to my understanding of it. As Solomon notes, a lot of Italians who immigrated to Canada never went back; they carried and maintained culinary traditions with arcane roots across the Atlantic, and passed these traditions on—to varying degrees of success—to the generations who live here now. To me, this has meant a direct line, through food, to a very specific heritage that feels like it is entirely, uniquely my own.