Trust us, you'll be making their lemon cake recipe all summer long. 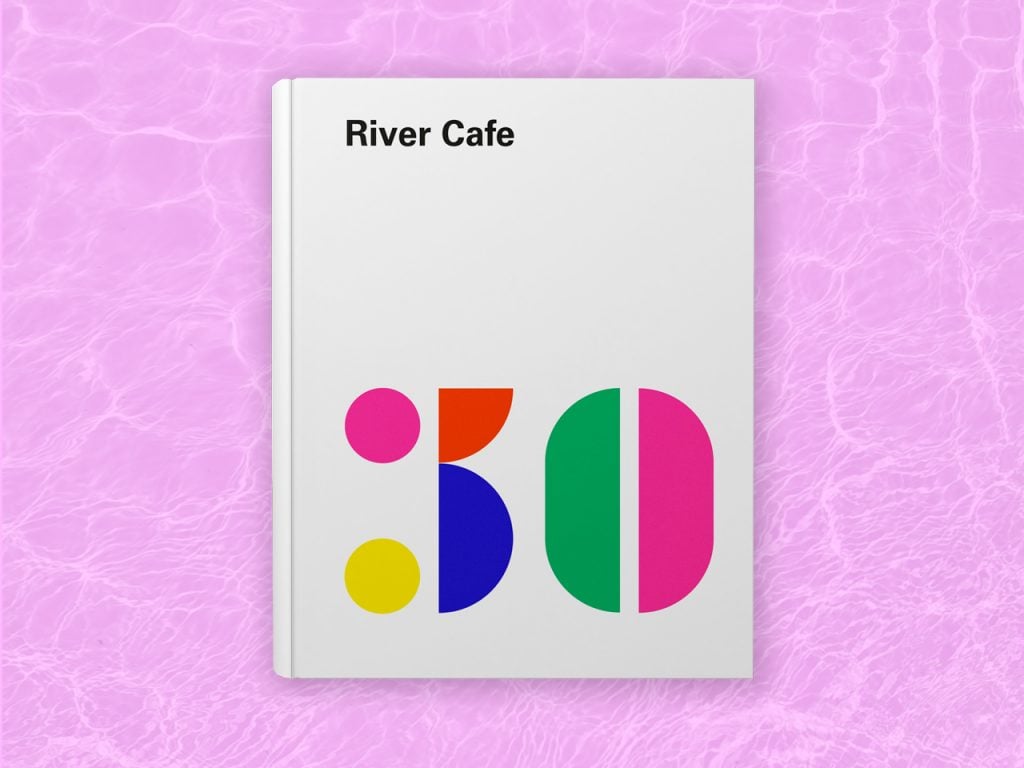 The Book: The River Café London: Thirty Years of Recipes and the Story of a Much-Loved Restaurant, $54.

Unlike many of the cookbooks hitting shelves over the last year, this book doesn’t have an “eat healthier” or “make it fast” gimmick, it’s simply a recipe archive and origin story of a well-known café by the Thames in Hammersmith, London. The restaurant is the product of a heartwarming partnership sparked between Ruth Rogers and Rose Gray in 1987, and their story is peppered in between recipes for homemade ravioli and raspberry-red wine sorbet. A massive success, The River Café is also where big names like Jamie Oliver and April Bloomfield cut their teeth as young chefs. It’s enough to make you wonder what kind of magic goes on in that kitchen.

So when the updated River Café cookbook was re-released last month, I had to see if I could bring some of that to my home. The café is known for its simple, classic Italian dishes, and I wanted to see if I could replicate that in my kitchen — and to understand what makes the restaurant so special that it is still held in such high such esteem after 30 years. 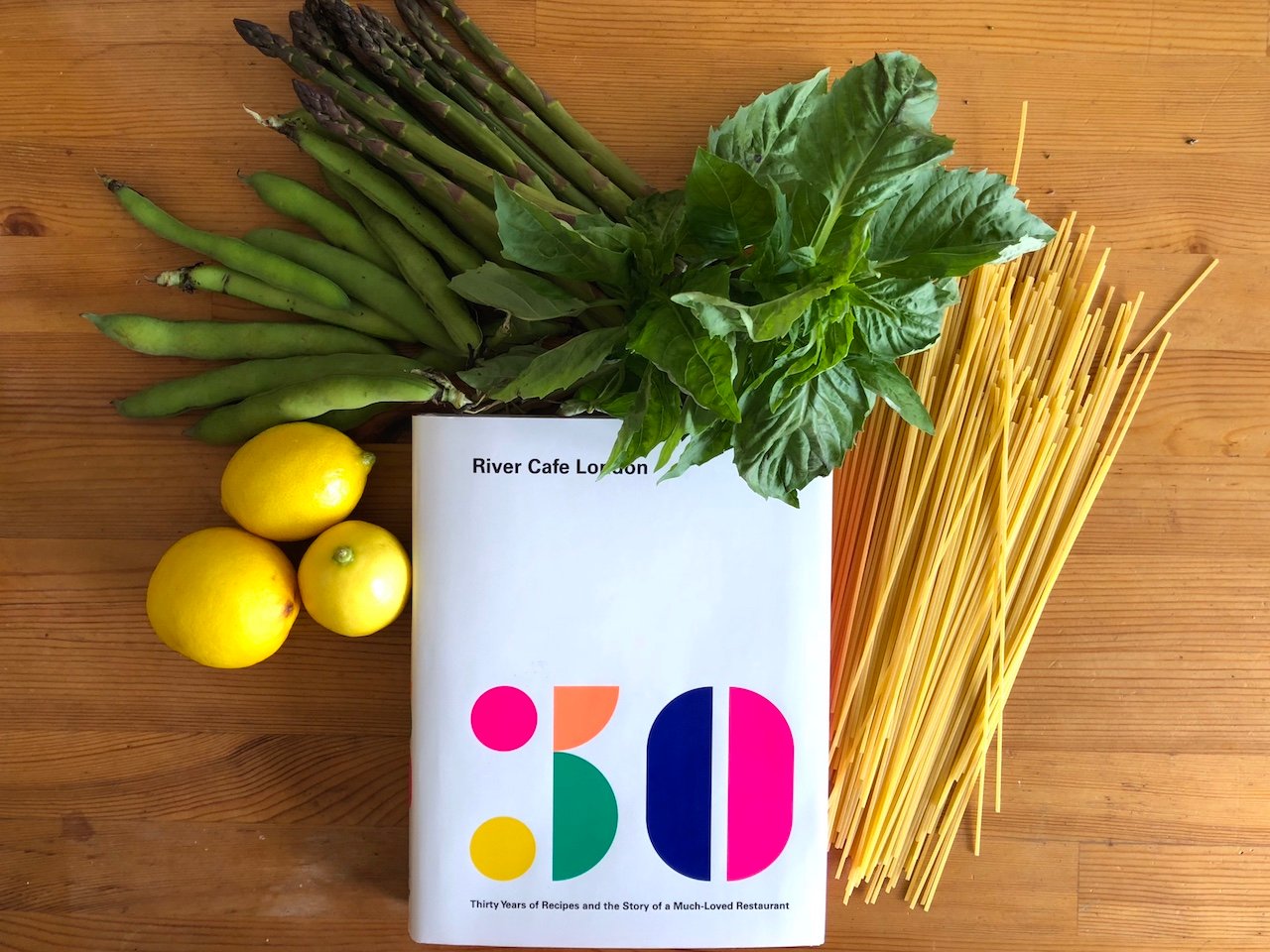 After diving in and reading it cover to cover, I loved what I found. The recipes that have been made in the restaurant over the years make you wish you were in Tuscany. Some of the mains looked a bit high-end — I’d only make slow-cooked veal shanks in nice red wine for a big dinner party — but the pasta and dessert chapters won me over immediately. Homemade pesto over twisted noodles; penne with sautéed zucchini, mint, lemon and garlic; citrus sorbet; chocolate cake — nothing a budding cook (with a few of the right tools) can’t handle.

Filled with bright colours (the inside of the jacket is hot pink), café sketches and art cleverly drawn on the menus by visiting artists, this book has a modern style that also lends itself to topping a well-curated coffee table.

I chose to make these over a few days, some for a dinner party, and others just for fun. The most difficult task was spending the better part of an hour shelling peas and fava beans for the minestrone; other recipes were shockingly simple. (I love a good challenge, but sometimes you just want a tasty meal without having to dig out every pot and pan you own.)

Bruschetta with Mozzarella and Spinach, page 44

A few crusty slices of bread with fresh tomatoes and herbs is one of my favourite go-to snacks. So I had to try the Bruschetta with Mozzarella and Spinach, a more meal-style version, for two reasons: one, to see if I could learn anything new, and two, well, fresh mozzarella. 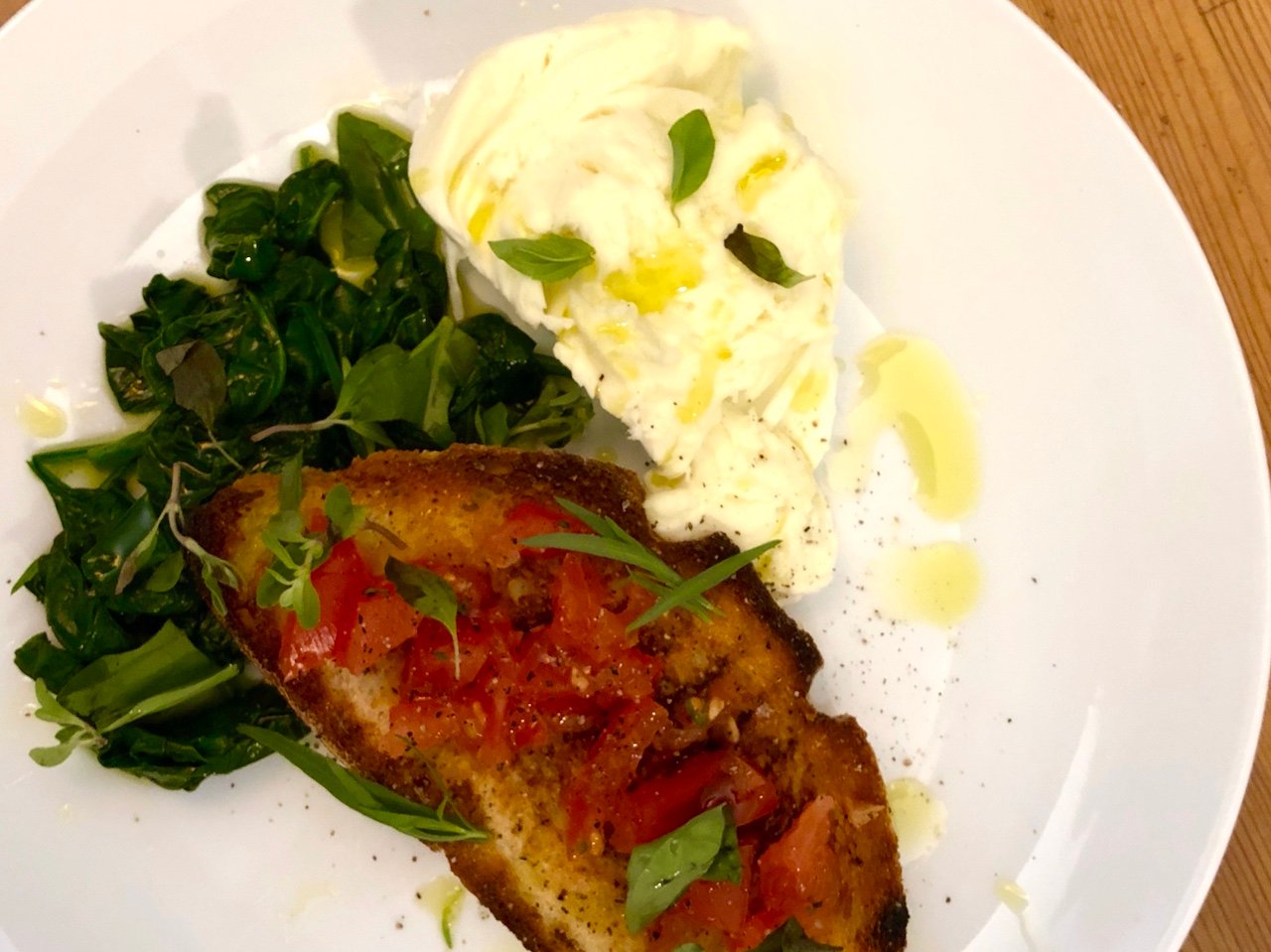 I missed the natural light for the photo shoot, so while it looks a little grainy here, it was indeed colourful and delicious. Blanching the spinach (quickly cooking it in boiling water) was the only real stove time required. Add seasoning, olive oil, toasted bread, fresh tomatoes, a half ball of fresh mozzarella (no, that’s not too much cheese), and it’s a light lunch you could be eating on the Ligurian coast.

The second and third recipes were for a dinner. I chose the veggie-packed summer minestrone – featuring fava beans, fresh peas, asparagus and green beans. It may have been heavy on the prep (you have to shell a lot of fava beans and peas), but it came in ultra-simple on the technical skills scale. While the vegetables and broth simmered, I made homemade pesto (just toss basil, pine nuts, garlic and olive oil in the blender) for the soup’s garnish. I served it as a starter before pasta, and what a success! The fresh pesto and parmesan added that extra zip the vegetables needed. 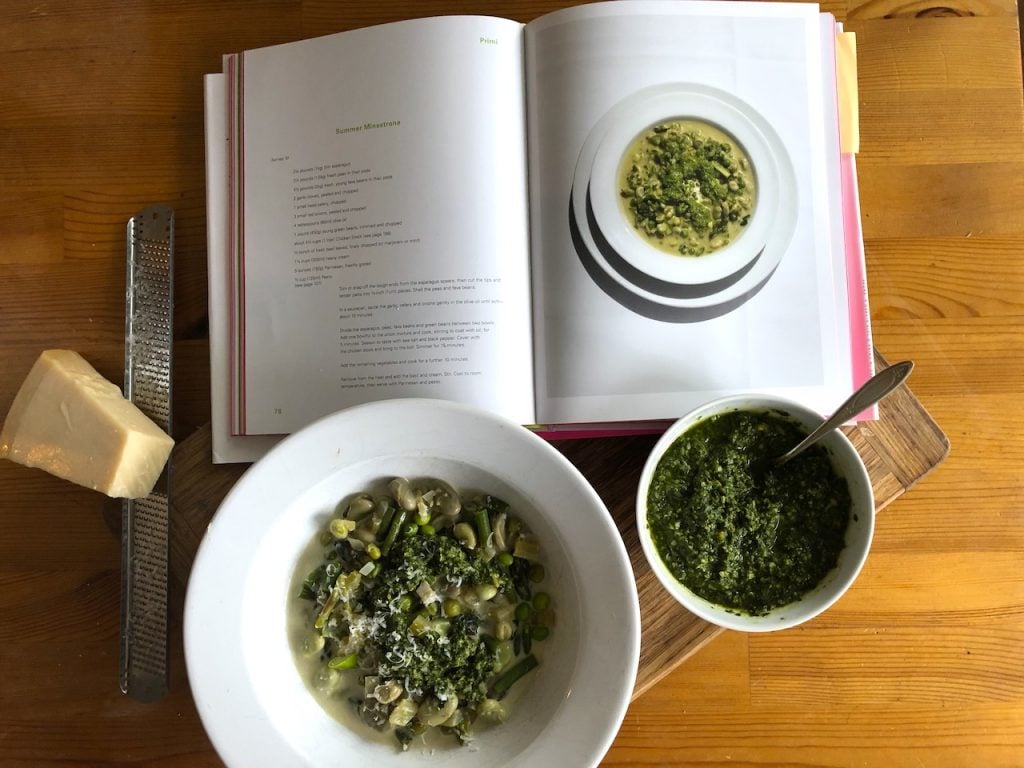 The River Café’s Polenta Almond and Lemon Cake was the dinner party dessert — and aside from a slight mishap with the pan (I didn’t read the dimensions carefully enough), it, too was surprisingly simple, and a big hit. Tip: always make sure you have the called-for pan size before you make the batter. (Mine turned out to be about three inches too small in diameter, so I had to use less batter and change the cooking time to make sure the cake turned out.) 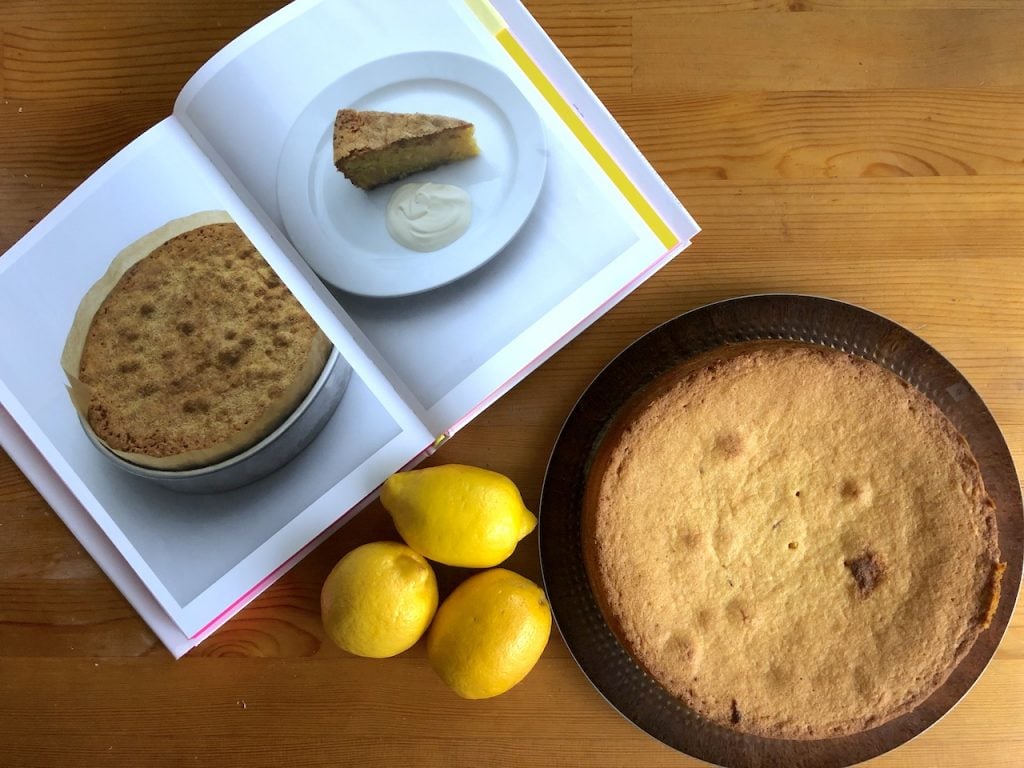 They recommend serving this cake with a drizzle of grappa — but I went for crème fraîche and the book’s lemon sorbet. It was a bit of an extravagant move (who needs to make two desserts in one day?), but when I saw there were bananas in the sorbet (yes, bananas, likely added to give a smoother texture and cut the acidity of the lemon) my curiosity was piqued. Skepticism that the banana flavour would come through pushed me forward. 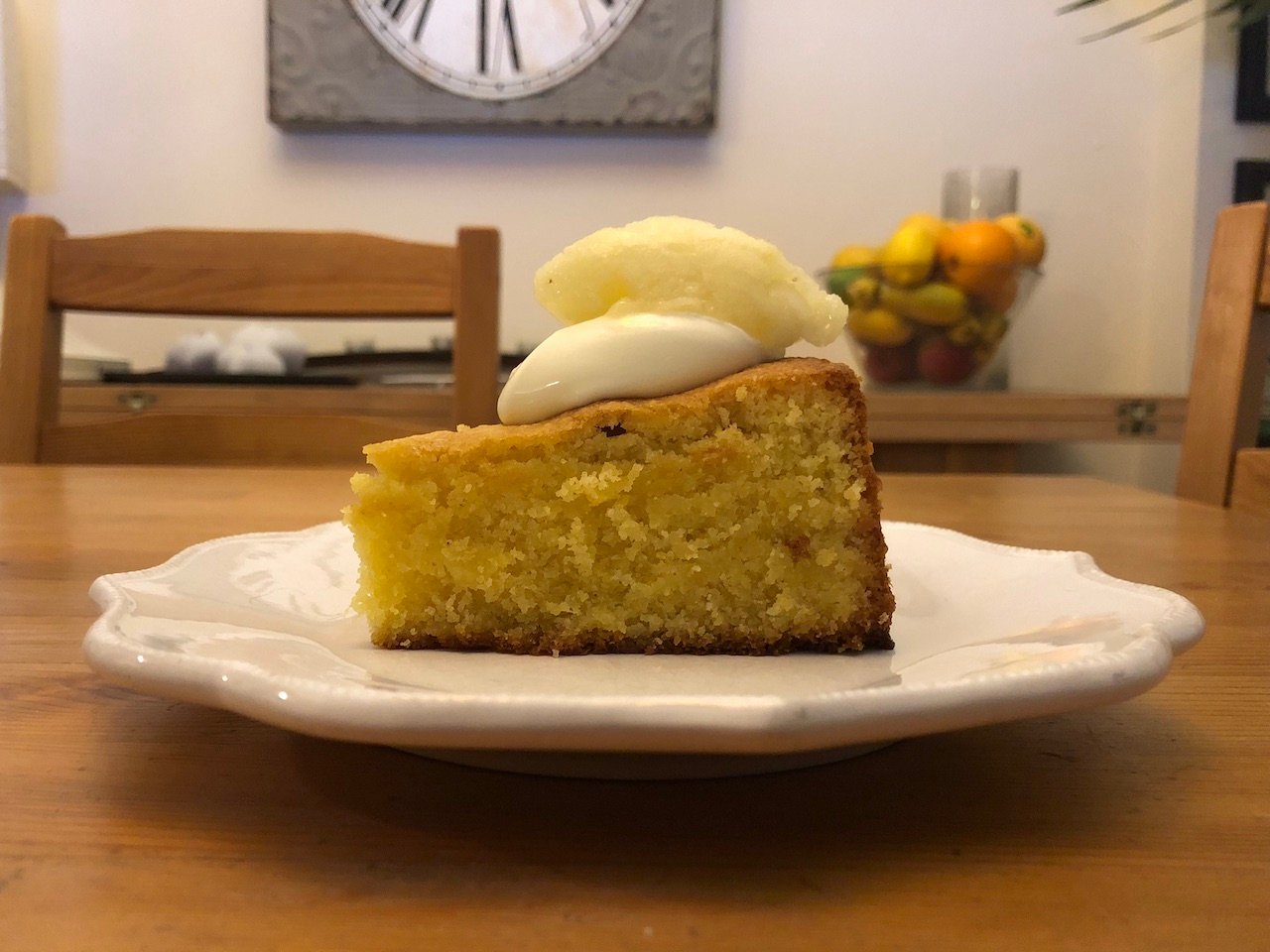 The result? Four and a half cups of freshly squeezed lemon juice later (plus sugar, and further mixing and freezing) a super-zesty yellow sorbet was revealed. And not one trace of banana! 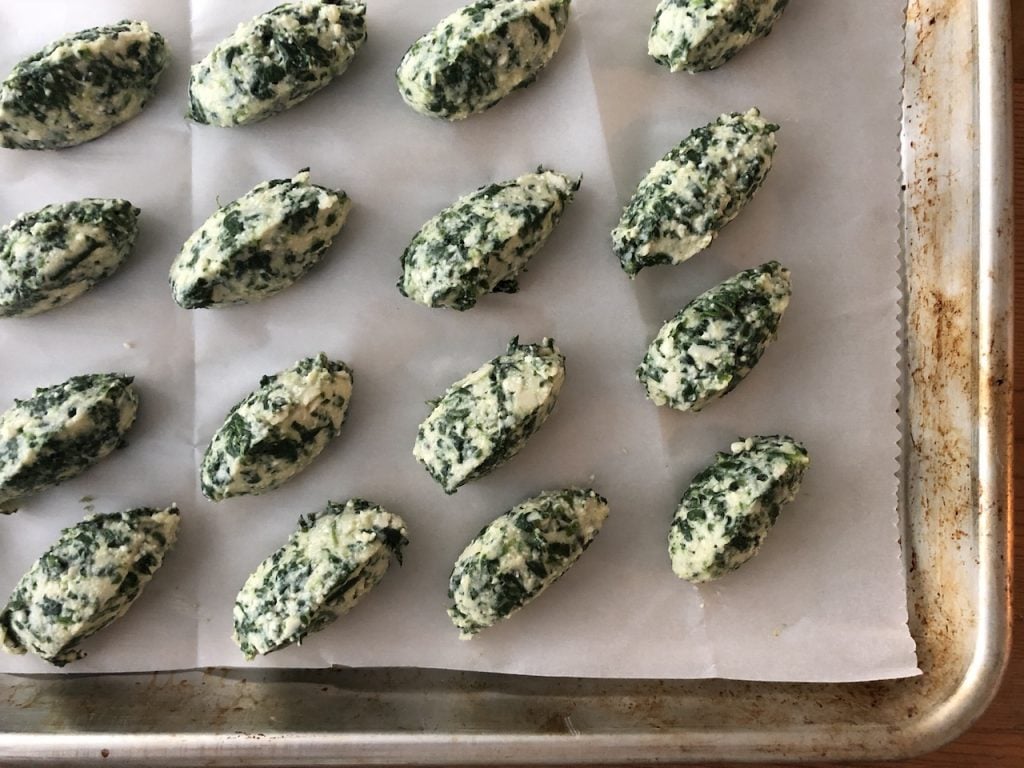 Next, I made the spinach gnocchi for a dinner appetizer. Calling for a few simple ingredients and blanched chopped spinach, I felt confident. Again, the most difficult element was a slight tediousness to the prep — shaping the gnocchi with spoons took a few tries to master, and clarifying butter for the sauce took a little extra time since it needed to be heated slowly. But they were incredibly quick to cook, with a delicate and simple flavour. 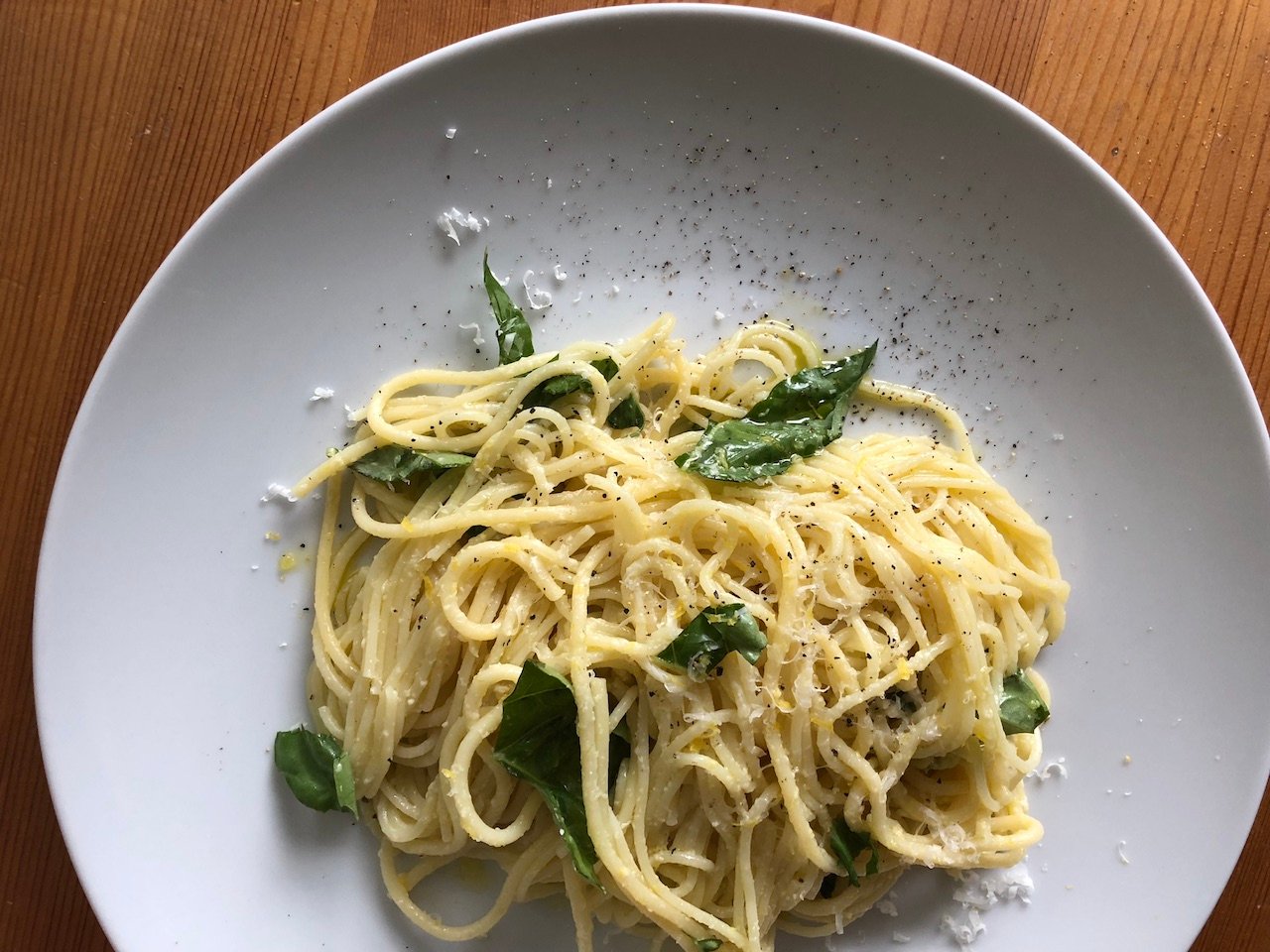 Finally, I tried the Spaghetti with Lemon, a more-famous recipe of The River Café’s. I don’t think I’ve ever made a pasta faster. Lemon juice, parmesan, olive oil, basil — four easy, main ingredients. That’s it. The dish was creamy, lemony and the basil added a fragrant and colourful finish. I can only imagine what it would taste like with Italian lemons (the book calls for Amalfi lemons if you can get them), but I think it would probably be a stronger version of the same: sunshine on a plate.

This book makes you think about meals like an Italian. By the end of my testing, the pasta and dessert chapters still have the most sticky-notes in them, but I love that the majority of the recipes are meant to highlight simple flavours made from delicious, seasonal ingredients. It will get the most use during the months of spring and summer when local produce hits its stride.

It did occasionally call for an assortment of ingredients that I don’t regularly have on my shopping list — anchovies feature strongly, as do Mediterranean seafoods like branzino and squid. But it’s balanced by everything from two simple tomato sauces (fast and slow), easy recipes you can tackle on a weeknight (lemon pasta), light summer lunches (bruschetta, mozzarella and spinach) to more elaborate mains, rustic tarts, and more. From easy to advanced, this cookbook has a recipe that everyone can make in their kitchen.

•      Italian food lovers, and curious cooks. It lightly challenges you without setting the bar out of reach (as long as you can find the ingredients you need)

Where it will live

On a bookshelf or coffee table — but never too far from the kitchen.