What One Indigenous Beadworker Did After Her Design Was Stolen

Earrings with a beaded fringe are a classic Indigenous style. When Krysta Furioso's personal design was copied, she enlisted the help of others to push back, support a good cause and have fun. 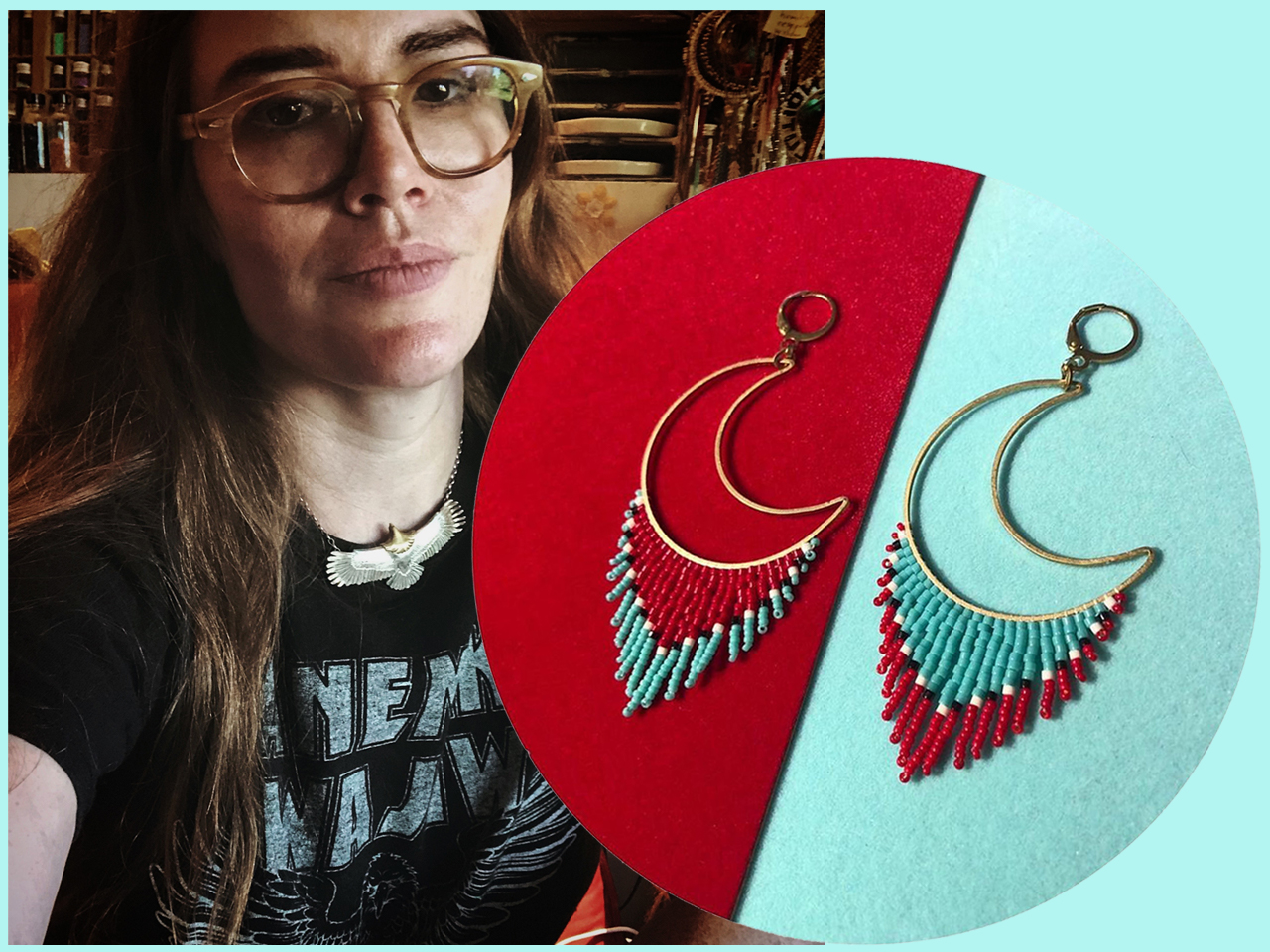 Krysta Furioso, and a pair of her shooting moon earrings.

Soon after Krysta Furioso got to Salt Spring Island, located in the Salish Sea off mainland British Columbia, she noticed beadwork very similar to her own designs being worn around her small town of about 10,000 people. To her knowledge, she was the only Indigenous beadworker on the island when she moved there in 2017, and she was stunned to think that someone local might be appropriating her work. “I saw people around town wearing a style that I had been selling… but they weren’t mine,” Furioso says.

Furioso is Ojibwe and the designer behind Only Child Handicrafts (OCH). She’s been beading for more than three decades. Using her background in graphic design, she creates intricate beadwoven pieces that meld culture and craftsmanship, selling them online, at markets and at pop ups. The specific design that Furioso saw copied was a pair of crescent moon earrings with beaded fringe, which she had dubbed “shooting moon” earrings.

Earrings with a beaded fringe are a classic Indigenous style that found mainstream popularity through Native beadwork, Furioso says. “They’re very identifiable as part of what Native people wear as jewelry.” For the Indigenous artists who make them, beaded earrings aren’t just something pretty to wear. “It’s considered a cultural craft. The techniques are passed down… as a way to connect with our culture.”

Cultural appropriation is, in essence, the theft of culture. It happens when a dominant culture adopts elements of an oppressed culture without consent, often profiting from what has been stolen. Wearing a First Nations style headdress at a music festival, for example, is a huge no-no, since headdresses are sacred to many Indigenous communities. Mimicking distinct Native patterns in beadwork when you’re not Indigenous and then selling that beadwork is also a no-no.

The other beaded earrings were sold at a lower price than hers, but money isn’t the only issue, says Furioso. “There’s are so many more ramifications than just, ‘Oh, I copied you.’ There’s so much more in the background of that.” She emphasizes that beadwork is an Indigenous craft that was practiced long before Canada became Canada and in all the years since, has been kept alive despite hundreds of years of oppression.

“You have to consider what was happening to Native people while these earrings were becoming popular,” Furioso says. “Residential schools were still happening until 1996. It’s not ancient history.”

Furioso was adopted at birth and didn’t grow up in her father’s Ojibwe culture. She discovered beadwork at around age 12 and was quickly hooked. “I reverse-engineered the techniques that were used in this bracelet that I bought, then made myself a little loom out of a cereal box [and] collected really crappy beads,” she says. As her skills improved, she began to sell her creations.

After seeing her moon design being sold online, Furioso reached out to the other beadworker, who wasn’t Indigenous, but found her resistant to Furioso’s concerns. She even allegedly threatened legal action. As frustrated as Furioso was, she didn’t feel like she could do much about it, so she discontinued the design and tried to forget the whole thing.

But she couldn’t forget. And, last January, “I woke up to a bunch of direct messages in my Instagram with all kinds of screenshots… of a post [from] the other beader,” she says. According to Furioso, the post, which appears to have been deleted, was a photo of the other beader’s moon earrings with a caption asking, “What’s a girl to do when her signature style is copied endlessly?”

In other words, the non-Indigenous beadworker was accusing other people of stealing the Indigenous beading design that Furioso had created. “It was surreal,” she says. Even more surreal was that this other beader had started selling kits for customers to make their own moon earrings at home. Furioso had had enough.

In the social media age, instances of cultural appropriation often devolve into heated online back-and-forths that lead to a lot of frustration. When companies that aren’t BIPOC-owned appear to be appropriating designs, they’re called out quickly: In March, retailer Anthropologie was criticized for selling a blouse that was almost identical to one designed for and sold by Orenda Tribe, a brand owned by Indigenous women. Following backlash, Anthropologie pulled the shirt from its website, but the company doesn’t seem to have responded to Orenda Tribe’s callout.

Furioso wanted to do more than have it out on Instagram; she wanted to turn the situation around and do something positive and productive. So, to “use this manure as fuel,” as she put it on Instagram, she launched the OCH beading challenge. She invited other Indigenous beaders to create their own shooting moon earrings, and offered to help sell them at a fair price, with 10 percent of proceeds going to Native Women in the Arts.

Thanks to her followers, the challenge took on a life of its own. There are dozens and dozens of posts using the #decolonizetheseeffingmoons hashtag on Instagram in support of the initiative, and of Furioso. And every single person who participated in the challenge has donated 100 percent of their profits. “That is exactly the type of following that I have,” Furioso says. “People are absolutely ready to help.”

But Lou-ann Neel, a Kwakwaka’wakw artist who lives in Victoria, says that flipping the script on cultural appropriation the way Furioso did shouldn’t be the only recourse for Indigenous artists who have their work appropriated, especially for those who can’t afford legal representation. There’s a “colonial false narrative… [that makes] people think that Native art is this prehistoric thing that’s in the public realm, and [that] they can just take it… and copy it,” says Neel.

In 2018, a parliamentary standing committee did a review of copyright law, and Neel was there to share her many ideas of how to make things better. She wants Canada to make registering for copyright more affordable, and then actually enforce the Copyright Act. She’d also like to see legislation similar to the U.S. Indian Arts and Crafts Act, which makes it illegal to advertise a product as Indigenous-made if it isn’t. Neel would also like to see the creation of a national advocacy organization for Indigenous artists that aims to protect their work.

Fears of cultural appropriation can make people wary of buying Indigenous creations at all, but purchasing and wearing a handmade beaded piece from an Indigenous designer is okay, and in fact a great way to support artists. Furioso acknowledges that it can be difficult to tell if a maker is Indigenous or not. “It is really hard to look at someone who has a blank bio and know for sure what’s happening on the other end,” she says. If you’re interested in purchasing something from a maker who doesn’t state their Indigenous community publicly, the best way to find out is to simply ask where someone is from or what community or nation claims them.

Furioso admits that this is tricky to navigate. “There are legitimate feelings of invalidation and defensiveness [when it comes to Indigenous identity], and, also, the tone matters,” she says “Don’t come at somebody in an accusatory way. If you really want to know, you should be asking, not accusing.” And if you see someone selling sacred items like headdresses, which are off limits, you’re dealing with fakes.

Indigenous beadworkers need space to grow their craft without being interrupted by appropriation, she says, but even among themselves, there are differences of opinions as to whether non-Indigenous people should practice, or profit from, certain types of beading. “What needs to be acknowledged by everyone is that beadwork is connected to Native culture, period,” Furioso says. “Acknowledging that truth is the first step.”