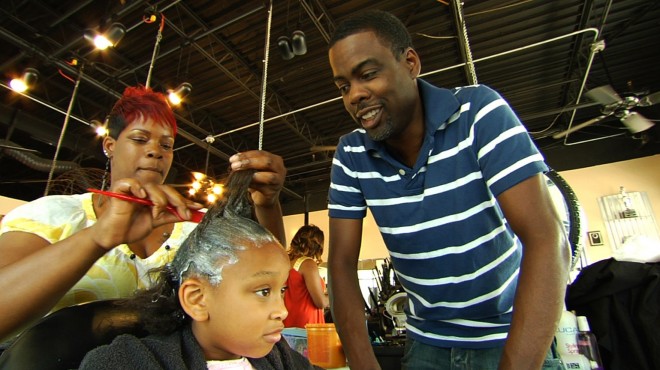 Senior editor Rachel Giese shares her thoughts on Chris Rock’s new documentary on hair: Consider Chris Rock my top pick for our next Men We Love issue. The comedian has always been one of my favourite provocateurs, but his new documentary Good Hair, which opens in the U.S. on Friday and in selected Canadian cities next week, is a remarkably thoughtful take on the complicated feelings black women have about their hair. As he reveals in the film, Rock was in part motivated by his young daughter who once asked him “Daddy, why don’t I have good hair?” and the doc is a kind of love letter to his wife and two girls and to every woman who’s felt crushed by an impossible beauty standard.

Which doesn’t mean that the film is earnest or humourless. On the contrary ‘ Rock has a lot of fun playing the joker and the devil’s advocate as he travels to beauty parlors and barber shops, to temples in India where sacrificed hair is collected and exported to the U.S. for weaves, and to an African-American beauty convention and trade show that culminates in a high-stakes hair-styling competition that borrows as much from Siegfried and Roy as from urban music videos. En route, Rock uses the attitudes that surround black hair to dig at issues like globalization and racism (more than one subject notes that when black people relax their hair, it makes “white people relaxed”) and subjects like Rev. Al Sharpton, Maya Angelou, Salt-n-Pepa and Nia Long offer astute comments on issues as varied as black entrepreneurship and”weave sex”. I got a chance to see the film at the Toronto International Film Festival in September and by that time, there was already a big buzz around it ‘ it doesn’t hurt that the hairstyle choices of US First Lady Michelle Obama have already been much discussed. Oprah and Tyra Banks have weighed in on their own hair issues, and stories about African-American hair have appeared in the New York Times and the Washington Post. Hopefully, the allegations that came out earlier this week that Rock had stolen the idea for the film won’t turn audiences off. Wherever the inspiration came from, in Rock’s hands Good Hair is a sly, funny and feminist untangling of emotionally charged subject.