The shapewear industry made its billions on making women hate their bodies, but could Lizzo’s shapewear line change that? 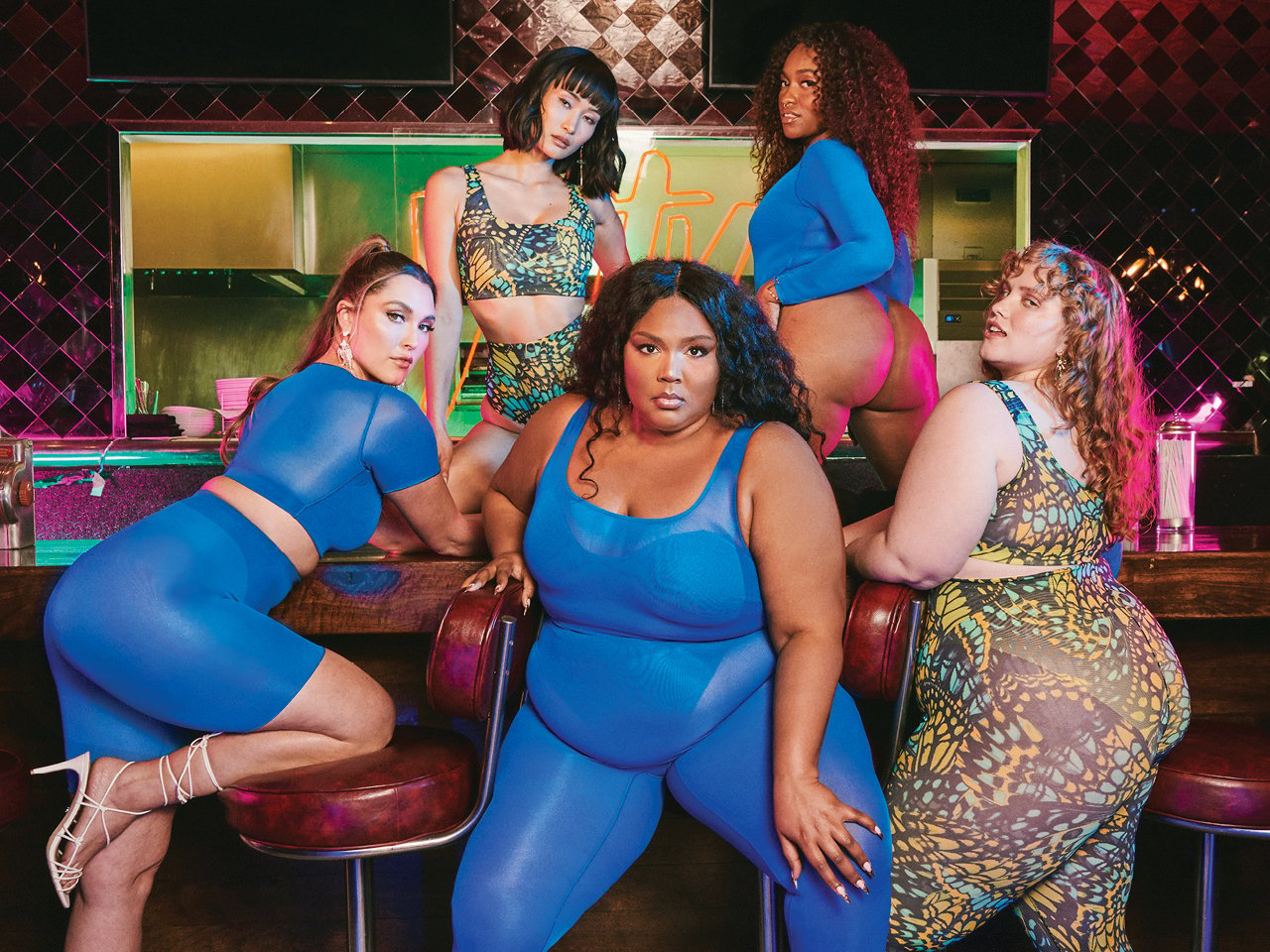 When I think of shapewear, that scene in Pirates of the Caribbean: The Curse of the Black Pearl when Keira Knightley faints over the side of a cliff after her corset was tied too tight comes to mind. That’s how shapewear has always made me feel—constricted, breathless, uncomfortable, like I’d rather fall off the side of a mountain than wear it. So when Lizzo announced her new line of shapewear, Yitty, I was understandably skeptical. Intrigued, yes. Even excited for the pop star I adore. But skeptical.

For nearly 20 years, one shapewear brand reigned supreme: Spanx. The word—much like Kleenex to tissue or Kraft Dinner to macaroni and cheese—was synonymous with shapewear itself. I’ve never tried Spanx, but I knew even as a young kid what their products were used for: to cinch, control and make our bodies appear smaller. But with the advent of Kim Kardashian’s Skims in 2018 and, now, Lizzo’s Yitty, the US$1.9 billion industry has had a major facelift. Or rather, a rebrand.

There’s a difference between Kardashian and Lizzo, though. Despite the diverse size range, Skims (and the entire Kardashian franchise) sells a fantasy of looking like the reality TV star. Yitty, on the other hand, was crafted by an unapologetically fat woman herself and geniusly launched in collaboration with Fabletics at the tail end of her Amazon Prime dance show Watch Out For the Big Grrrls, right before releasing her single “About Damn Time” and announcing her second stadium tour.

This is a dream 5 years in the making…. Introducing @YittyOfficial: Shapewear you can wear Underwear, Overwear, Anywhere. For Every Damn Body. 6X to Xs. Are you ready for the YITTY LIBERATION? Coming soon… pic.twitter.com/HEIw10o3Nx

I love Lizzo. But it’s like she timed this release perfectly to when I’d just become comfortable with my visible belly line. The last thing I wanted to do was go back to wearing shapewear, after throwing all of mine out and after living through middle school—a time when I wore tight camisoles underneath every shirt, every day, to control my belly’s now-endearing jiggle. During that time, they made me feel safe and protected from ridicule. Now, they make me feel constricted; like all the work I’d done to learn to love my body was for naught.

As I browsed her line, took in the incredible photos on her Instagram showing all sorts of bodies wearing these new garments, it got me thinking. Shapewear might’ve once been created to control how our bodies look and appeal to the male gaze, but who’s to say these products—which have practical value, like bettering physical comfort in warm weather and helping our favourite pieces of clothing fit better—cannot be reclaimed by fat people who like wearing them? Practicality aside, who are we to tell anyone what they can and cannot wear? It’s a tall order in a world that is still hostile towards fat people.

So, I tried it. Fabletics sent over three items from the Nearly Naked Shaping medium-compression line, the most standard of Yitty’s offerings, which also include loungewear and some sexier, light-compression, mesh-paneled options. (Canadian shoppers can buy Yitty through their Fabletics VIP membership, which costs US$49.95 in credit to put towards new clothes every month.) I opened the boxes, immediately taken aback by each item looking like it shrunk in the dryer. Knowing that shapewear often looks smaller than it actually is, I did my best to keep an open mind. 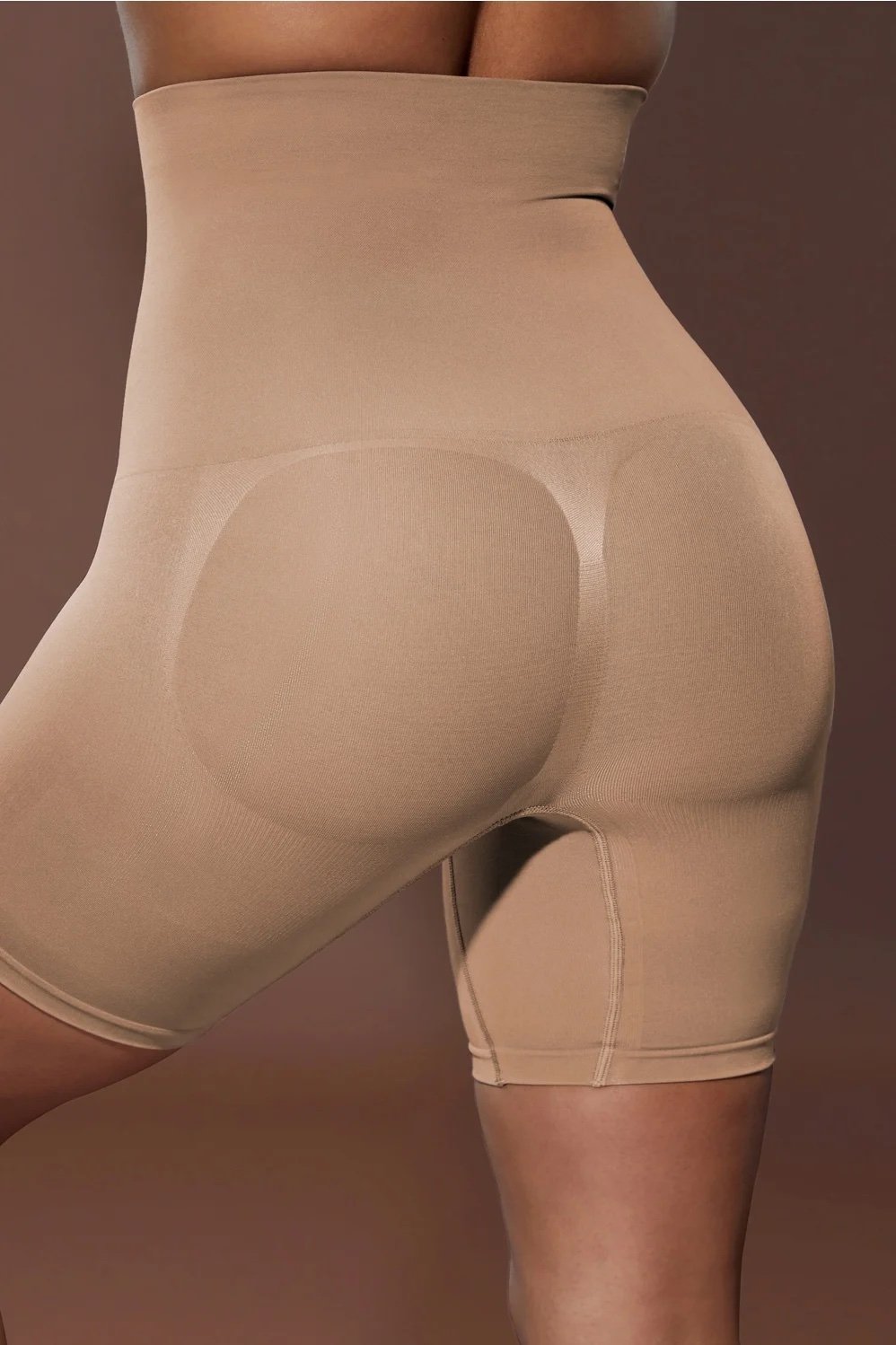 Given the worst of the thigh-chafing months are already here, the first product I picked was the Nearly Naked Shaping Ultra High Waist Short, described as “a lightweight seamless short designed to shape and firm your natural curves with comfortable all-around compression.” It also features sheer butt-lifting detail to shape and define, and they can be worn without underwear, which I love (and is infinitely more comfortable than with an extra layer).

Anyone who has thighs that touch, even just a smidge, knows the value of a really great short to wear under dresses and skirts throughout the summer. Immediately I notice how stretchy and thick the material is, and am glad to see a strip of grippy fabric lining the waistband. I’m extremely skeptical that this will actually be a no-roll waistband, and, unfortunately, I find out I’m right. After wearing them around in my apartment for a while, I realize I’m constantly pulling the shorts up to stop the band from rolling. I suspect it’s because I didn’t get the right size—I definitely recommend sizing up for shapewear, even though that feels counterintuitive.

What I loved about these shorts, though, is that they truly are undetectable under fitted clothing. One issue I always run into with shorts is the line that appears on my thighs, but the leg band on these sits flush against the skin. With the proper size, these would’ve been perfect. Wearing them under a fitted dress, I definitely felt more “held in.” They refined my shape in a way that didn’t change my body, but supported it—not unlike wearing a bra. Even better, the seams on the inside of the thigh are placed in such a way that they don’t rub together, meaning less discomfort and more longevity out of the product. 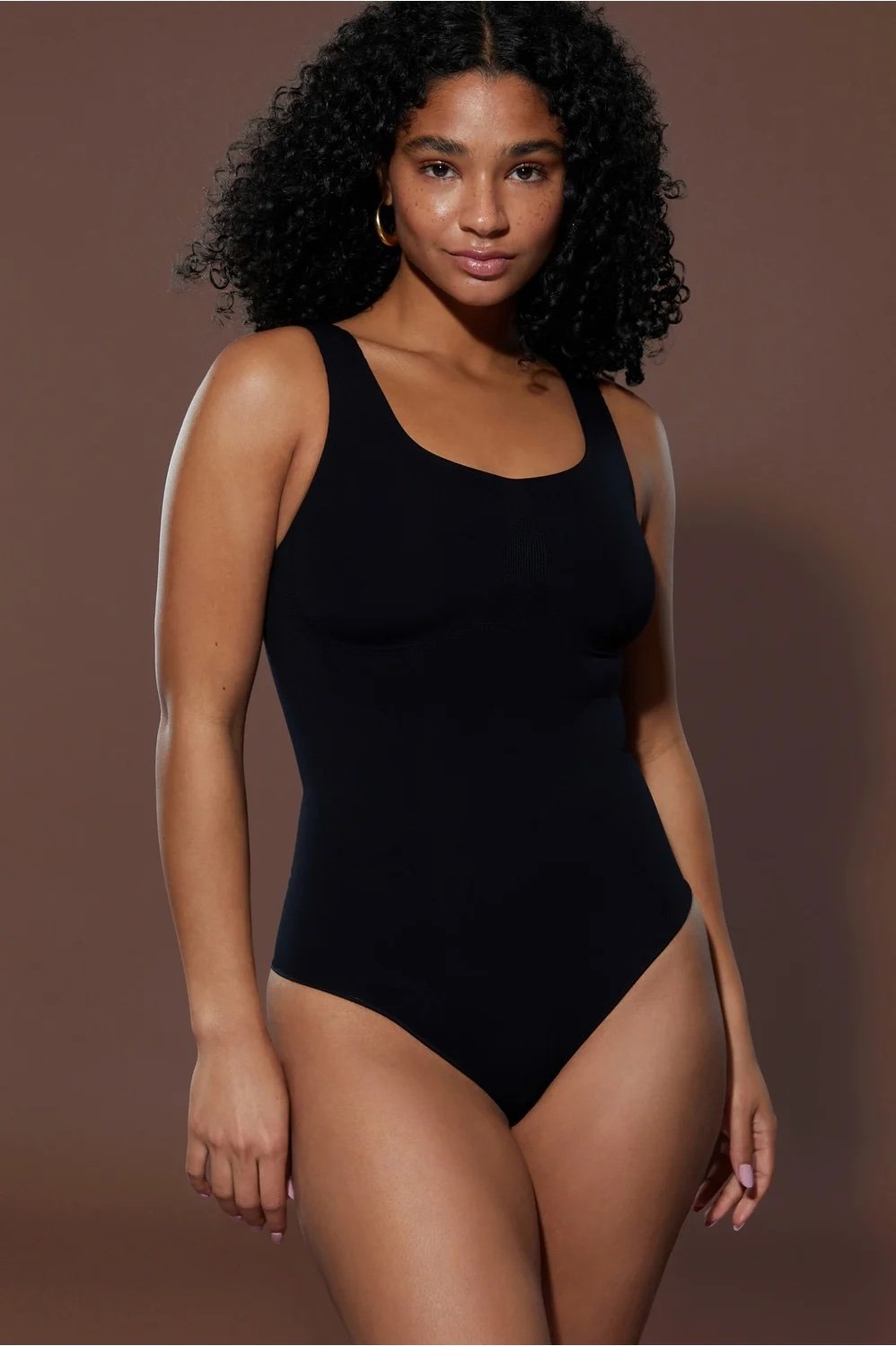 I love a firm bodysuit, but have never been able to find one of the thong variety that didn’t feel like my body was being ripped in two every time I moved. But this one seemed promising, with all-around compression, reinforced shoulders, three-way stitching and adjustable snap closures for when nature calls.

Just like the aforementioned high waist short, this bodysuit is made of the same thick, moisture-wicking, cool-to-the-touch material. Again, it looks like it’s made for ants out of the box, but does mould to your body as you slip (or struggle, as I did) into it. The compression felt comfortable; supportive but not constricting. I love the concept of the piece—the underboob panel gave shape to my chest and the thick straps were super comfortable—but I did, indeed, feel like I was being chopped in half by the thong. 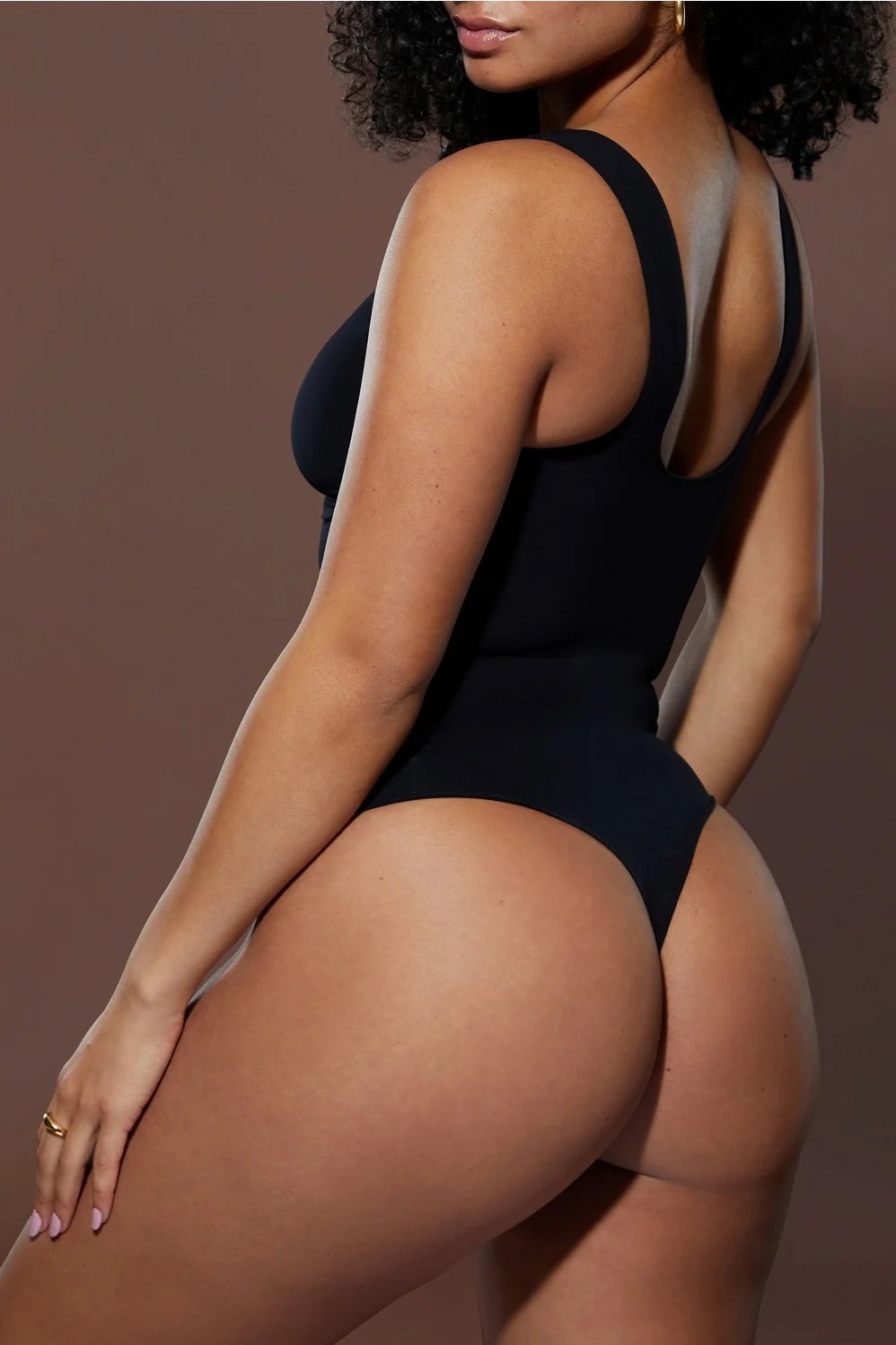 Aside from this potentially being another case of a too-small size, I’m not sure I’d get much wear out of this regardless of if it fit properly. I wouldn’t wear it as a bodysuit, as it really looks like it’s meant to be worn underneath clothing and not as a stand-alone garment. Anyone with a long torso like myself would be better off buying Yitty’s Nearly Naked Shaping Thong and Nearly Naked Shaping Midi Bra for the same effect. 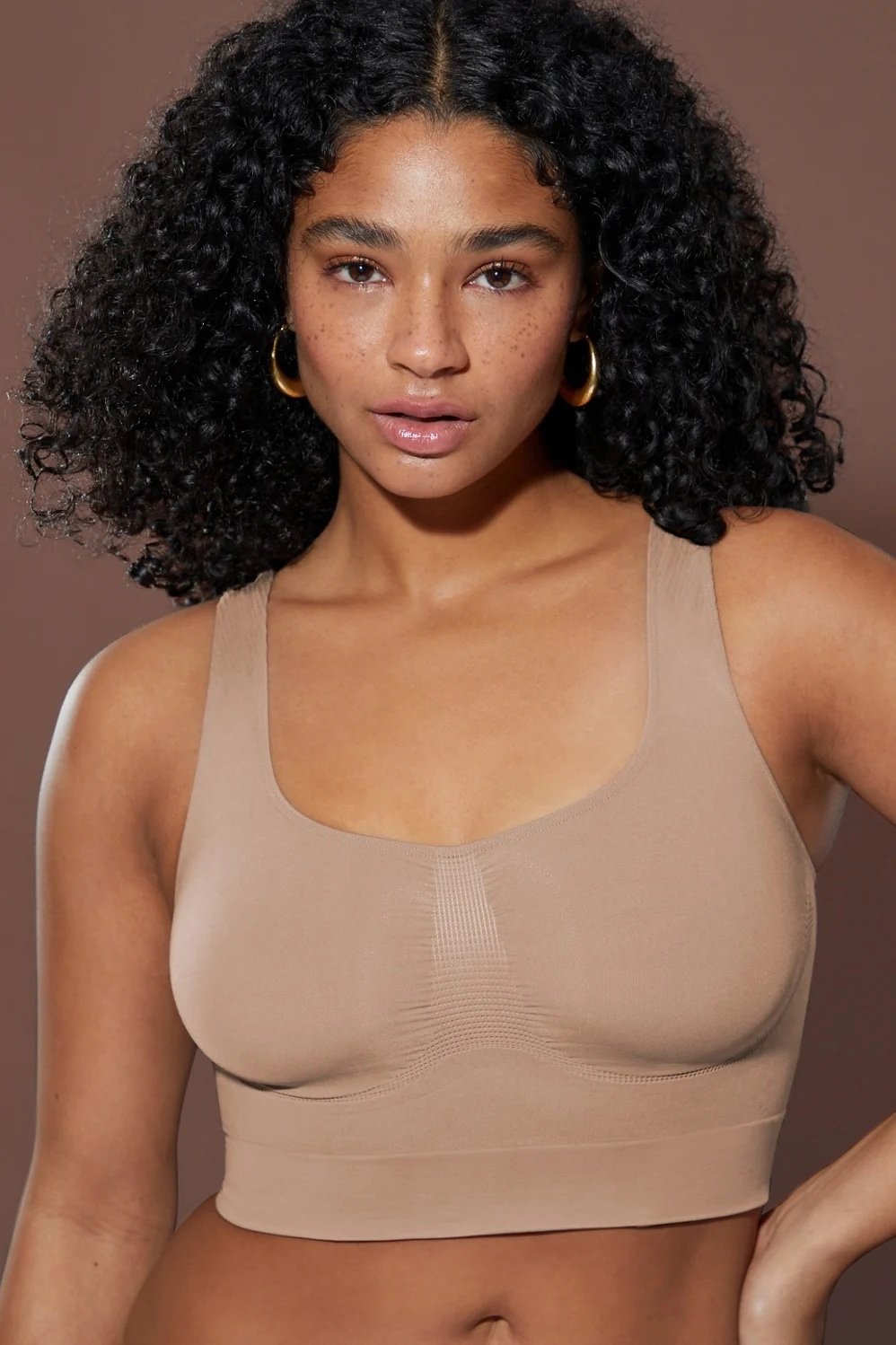 I was most excited for the Nearly Naked Shaping Midi Bra. As someone who said goodbye to traditional bras at the beginning of the pandemic, I was looking for an option that wasn’t a sports bra, but also wasn’t a bralette, to wear on days when I want a bit more support—and this bra delivered.

Easily the most comfortable of the three items I tried, it’s made from that same cooling material with a bit less compression than the other two (although it’s listed as medium compression, too). The wide shoulder straps are super comfortable, and the smoothing design on the back also means no pinching or spilling of the fat by my armpits. It’s cut slightly longer than the traditional bra; a great fit for my B-shaped tummy that has some rolls underneath my breasts.

I tested out the hold by jumping around my apartment and was surprised that the band stayed pretty much put, thanks to the gripping material of the no-roll band. The panel in between the breast area means no uni-boob, and I’d be totally comfortable wearing this as a stand-alone top for a chic athleisure look… You know, in my fantasy life where I’m hiking through the hills of Los Angeles with my celebrity friend, Lizzo.

The bottom line: There’s money to be made in shapewear. People still want to buy these garments and look a certain way in their clothing. There’s no doubt that the history of shapewear is troubling, to say the least—I don’t know a single fat person who doesn’t have a complicated or even traumatic history with these types of garments. But what gets left out of the conversation around shapewear is that larger people are diverse. We want, prefer and dislike different things. It doesn’t mean we can’t, too, be critical of the industries and products that make money off of us hating ourselves—but there has to be room for more nuance.

But Lizzo’s line promises one thing, in her words: “This is not an invitation to change who you are, this is an opportunity to be who you are on your terms.” Maybe who you are is someone who feels more comfortable in shapewear. Maybe you’re someone who isn’t ready to let go quite yet. Yitty is a feel-good alternative to the shapewear out there that isn’t comfortable and doesn’t come in larger sizes. As she says: “If it makes you feel good, put it on.”