I had grandiose ideas of having a relaxing time making dinner tonight. I had chosen the dish and fully expected to pick up a few more grocery items and then leisurely pull out my crisp new Chatelaine cookbook... 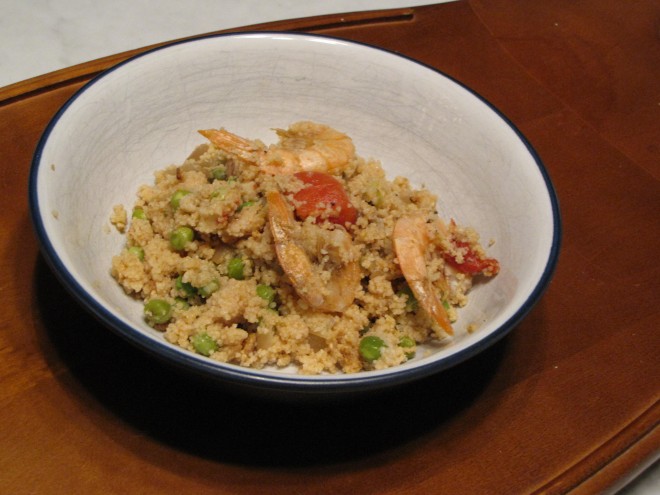 I had the grandiose idea of having a relaxing time making dinner tonight. I had chosen the dish and fully expected to pick up a few more grocery items and then leisurely pull out my crisp new Chatelaine cookbook, perhaps even put on some music, roll up my sleeves and get down to cooking. But one errand turned into two and then an impromptu Ikea run (when we’d realized that our toddler was fed, dry and happy so we just kept on driving) and the next thing I knew I was running into the house, starving and determined to get us fed asap.

This recipe boasts a preparation to cooking time of less than half an hour. I usually find recipe prep times to be grossly underestimated (much like how I fill in my weight on medical documents). But I have to say that in this particular case this meal was prepared and consumed in record time. There are a few shortcuts I took, however, which helped me to achieve the goal of feeding us in just 30 minutes after I walked into the kitchen with an armload of groceries.

1. I didn’t peel the frozen shrimp first. This cut down on my food preparation time but increased my meal consumption time as I had to pause to peel and discard the shells.

2. I didn’t thaw the peas before throwing them in at Step 4. Although this, again, cut down on my preparation time (though only by mere seconds, I’m sure) it did increase my husband’s meal consumption time. His mouthfuls were interrupted by frequent musings on the peas in the dish, “So, why are the peas like this? I’ve never seen them white on the outside but green on the inside” or “You know what I love? When you eat peas that are perfectly cooked so that when you bite into them their juices squirt into your mouth” or “Wow, these peas are so chewy they kind of taste like lentils.”

3. I did not stop to partake in the ritual of our toddler’s nightly routine. My husband changed him, fed him his bedtime snack, read a few books, tucked him in and 30 minutes later entered the kitchen so that I could say, “Your dinner is getting cold.” I had even cleaned up the dishes by this point.

We absolutely loved this meal. I will make it again (likely soon as I still have three hot Italian sausages sitting in my fridge). We have plenty of leftovers even though we had generous helpings (my husband had two- even in spite of the pea fiasco!). I look forward to pulling it out for lunch tomorrow in front of my colleagues. I think I’ll peel the shrimp tonight, though, before I pack it away in my lunch bag.

Get the recipe for Fast-Fix Paella here.