We were invited to a friend’s place for brunch, along with three other families with young children. I promised to bring a dish so I opted for Chocolate-stuffed French Toast 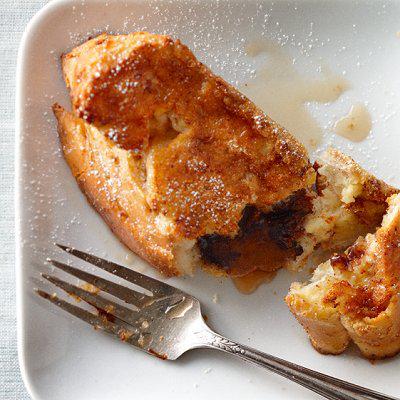 We were invited to a friend’s place for brunch, along with three other families with young children. In case you don’t already know, Sunday brunch is the new Saturday night for 30-somethings with toddlers and/or infants. It’s an opportunity for us to get out of the house and socialize with other sleep-deprived adults. And it’s far more enticing to us than getting a sitter and actually going out on a Saturday night.

I promised to bring a dish and was set on making the Spinach and chevre frittata until I heard that our hosts would be serving up a spinach and cheese strata so I moved on to plan B. Instead, I opted for Chocolate-stuffed French toast (page 8 of Chatelaine’s new cookbook, Modern Classics) – a recipe I’d been eyeing up, but felt that it was likely too decadent to make at home for just my immediate family. Plus, what dish could easily feed a room full of toddlers and young children than French toast filled with chocolate, caramel and maple syrup?

I chose to include cinnamon over the ground cardamom thinking that a) toddler palates were probably more inclined to prefer cinnamon and that b) I was running a little late and didn’t have time (nor the patience) to open cardamom pods and then grind the seeds. My original intention was to do the prep work in Step 1 and refrigerate overnight. As it turned out, the refrigeration process was exactly one hour, not a second more.

Another problem I had not considered with plan B was: how was I going to serve these warm without burdening our hosts by baking them at the party? When I had planned to make the Spinach and chevre frittata I knew that it could be served up cold, as well as warm. But French toast? It must be served warm! I found the perfect solution.

When it was time to flip the French toast for 8 to 10 more minutes I would order a taxi, which would take 10 minutes to arrive. The oven timer would go off, I would remove the French toast from the oven, transfer them to their serving containers, drizzle them with maple syrup, slap on the lids and jump into a cab. Ten minutes later, I’d place them on the serving table still warm. Would you believe my plan actually worked?

I likely could have cut the baguette into 2-inch thick rounds, but the suggested 1 ½ inch thickness made the caramel-filled chocolate square to bread ratio perfectly delicious. I was concerned that these tasty treats would actually be too sickeningly sweet. But, quite frankly, they were flawless. (And quite a hit at the brunch, I might add.) I might make these again soon. 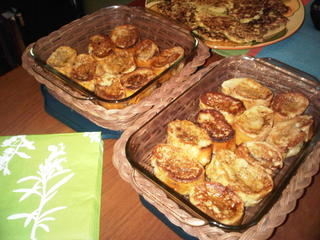 I have two more caramel-filled chocolate bars in my possession, but the ‘thick’ versions. Dare I try?

For more information on Chatelaine Modern Classics, including how to purchase, go here.