Why We Need To Talk About White Feminism... Like, Now

It has been an incredible year of fiery, female resistance, but women of colour are consistently left out of the conversation. 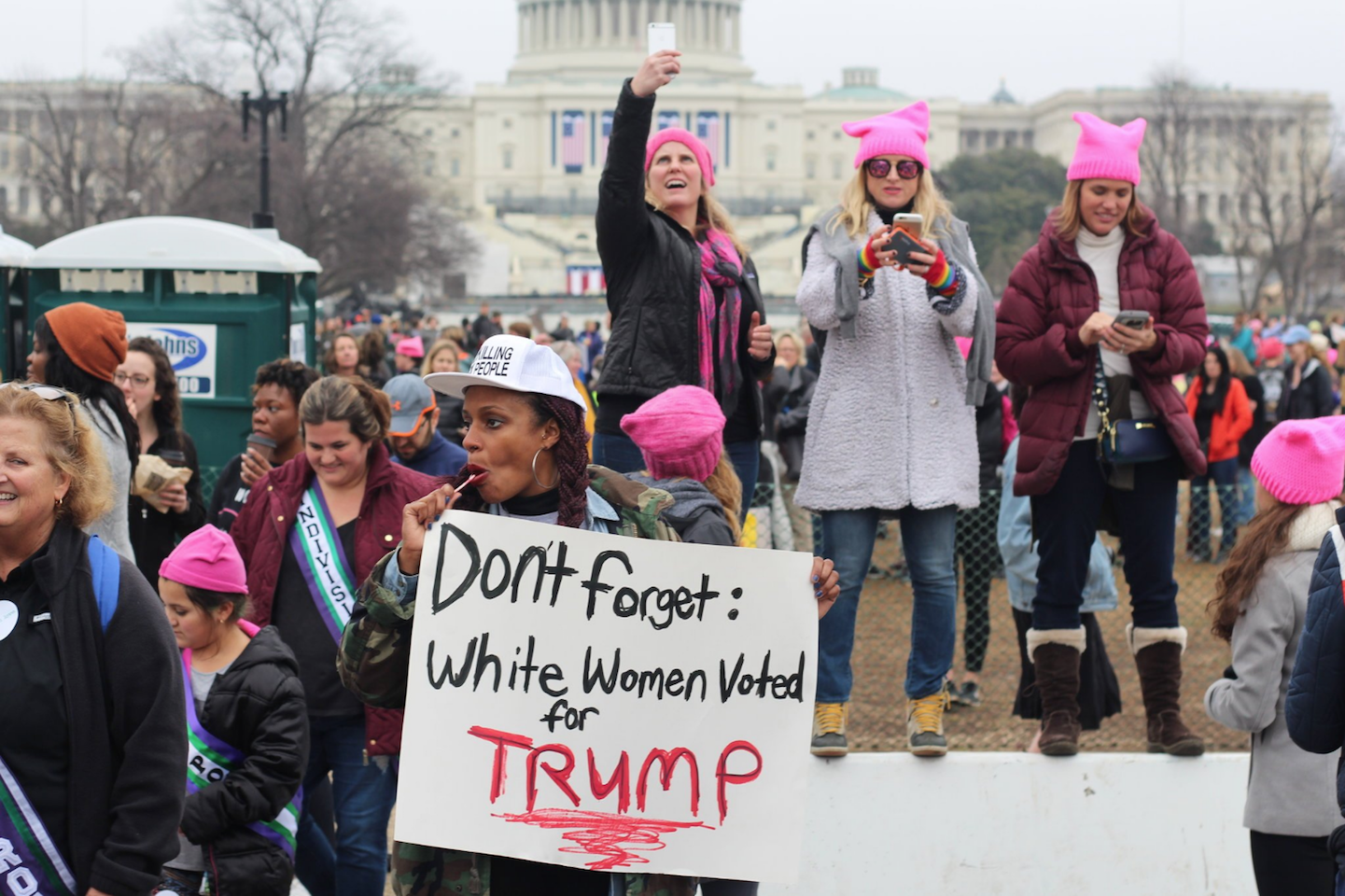 On Jan. 21, hundreds of thousands of women swarmed the streets of Washington, D.C., to speak up for the rights and freedoms of American women. With over 600 sister rallies reported in other cities across the globe, the 2017 Women’s March was arguably the biggest show of female solidarity the world had ever seen.

This moment was more than a single act of protest against a misogynistic administration. From the Harvey Weinstein scandal to the #MeToo campaign, the march successfully set the tone for what would turn out to be a year of fiery, female resistance. At the end of 2017, many women feel more empowered to speak out about their experiences and seek justice for themselves, and it has been truly amazing to watch.

That being said, it would be wonderful to assume that this newly amplified communal voice was speaking on behalf of all women, or that every woman is an equal beneficiary of the feminist movement, but that simply isn’t true. So while we celebrate the strides we continue to make in a world that has kept us so pressed down for so long, the victory lap is often bittersweet when I consider who is consistently dismissed or left out of that conversation: women of colour.

Last month, the world was left picking up its collective jaw when Lena Dunham defended her former colleague, Murray Miller, against allegations of sexual assault. Dunham, a self-proclaimed feminist icon said that she was positive 23-year-old Aurora Perrineau’s accusations were part of the 3 percent that are misreported each year. Please allow me to lay out the power and racial dynamics in this story more plainly: Perrineau is a young woman of colour accusing a powerful white guy of assaulting her. Dunham — wealthy, white and powerful — called Perrineau a liar when no one even asked for her opinion.

While Dunham should be held entirely responsible for her words and actions (for the umpteenth time), her transgression cannot be viewed in isolation. It is a symptom of a much bigger problem, one that goes beyond the privilege Dunham is so quick to draw on for her self-deprecating humour or the naiveté that she claims possessed her at the time. (Sis, come on. Please.) Lena Dunham is a white feminist.

Not to be confused with feminism practiced by white people, white feminism is a brand of feminism that minimizes, forgets or wilfully ignores the experiences of women of colour. It looks at womanhood through a beige-coloured, middle-class lens and ignores the many ways that women’s issues specifically affect Black women, and Latina women, and Indigenous women, and any women who aren’t… well, white. Whiteness has always been positioned as the “standard,” and it’s no different when it comes to feminism. This means white women are very often pushed to the forefront of conversations about gendered and sexual violence and workplace harassment, leaving women of colour and their experiences to wither away in the margins.

When the Weinstein story broke, actress Rose McGowan became one of the most outspoken and celebrated champions for survivors of sexual violence. Then, in what she claims was a marijuana-induced “stupidity lapse,” she suggested that being called a woman was as bad as being called the n-word. This is white feminism at work. Using hate speech in a casual comparison is not only lazy and offensive, it trivializes the experiences of the women who it’s targeted at.

But these racial blind spots also harm women of colour in more tangible, systemic ways. I cringe whenever the conversation turns to accountability for powerful, creepy men because the president of the United States has so far faced no consequence for his own wrongdoings other than public outrage. In 2016, the majority of white American women voted for Donald Trump, a man who had been accused of sexual assault and literally been caught on tape saying powerful men could do with women’s bodies as they pleased. It didn’t make sense how anyone could justify making this guy the president. And then it hit me. To a certain segment of the population, Trump is, at worst, a predator and misogynist and, at best, badly behaved and impetuous. The reality is that white, straight, middle-class women will simply never face the consequences of that political decision in the same way as their counterparts of colour.

But these problems aren’t a contemporary phenomenon or some byproduct of modern feminism. History shows that feminism has very often spoken for a specific kind of woman. If the women’s movement had a president, Susan B. Anthony would probably have been it. The suffragette fought hard against a society where men dominated women, but said she could live with slavery if she had to. No, really. She actually said that.

Even to this day, the social, political and economic advancements that women have made seem to cater to only a small segment of the gender. Last year America came this close to having its first female president, but women of colour are still grossly underrepresented in politics. Canadian women overall now make 87 cents on every man’s dollar, but minority women still lag even behind that, earning roughly the same amount on every white woman’s dollar.

So have we made progress? Yes. But are we doing it at the same pace? Heck no. In reality, feminism is only truly effective as a wholesome movement if it takes into account the ways that racial inequality feeds into gender inequality. It only works if every woman does better because of it, and not just some.