The SNC-Lavalin Scandal Has Left Me A Conflicted Voter

The controversy has shown the cracks in Trudeau’s 'sunny ways' government. Perhaps it’s time to consider a new way of doing things. 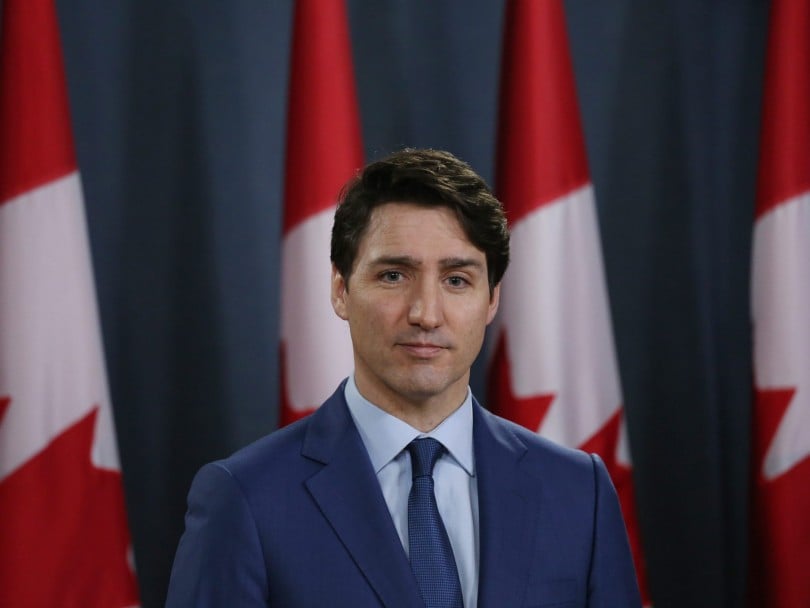 Justin Trudeau at a press conference on the SNC-Lavalin affair on March 7, 2019 in Ottawa. (Photo: Dave Chan/Getty Images)

There’s an atomic-sized scandal mushrooming in Ottawa, and what the political landscape will look like when the dust settles is anyone’s guess.

That is, if the dust ever settles.

The mayhem involving the upper echelons of government is fast-moving and ever-changing. Just when we think we have a clear picture, more information surfaces. And the bigger this gets, the more conflicted I feel about my political loyalties and the more concerned I become for the future of our country.

I don’t think I’m alone in this. It’s a tough time to be a left-leaning voter.

What we know so far is this: On February 27, former justice minister Jody Wilson-Raybould testified before the House of Commons justice committee that, in 2018, she faced “sustained” pressure from the prime minister and 10 other top officials who urged her to defer corruption and fraud charges against Quebec engineering and construction giant SNC-Lavalin. The company stands accused of paying out millions in bribes to win Libyan contracts.

Not long after Wilson-Raybould’s testimony, Justin Trudeau spoke to the press, stating he was “not in agreement” with the former justice minister, and that he and his team “always acted in an appropriate and professional manner.”

It seems not everyone agreed with that statement. A few days after Wilson-Raybould’s testimony, Liberal MP Jane Philpott, who is widely known and respected for her work as both a politician and physician, resigned from her position as president of the Treasury Board, dealing another heavy blow to the Trudeau brand. “I must abide by my core values, my ethical responsibilities and constitutional obligations,” she wrote in her resignation letter.

Then, along came Gerald Butts to give his interpretation of events. Butts had resigned as the prime minister’s top advisor just prior to Wilson-Raybould’s testimony. On March 6, Butts told the justice committee that there was “nothing inappropriate” about the discussions had with Wilson-Raybould—that they were merely to ensure she understood the full implications of a SNC-Lavalin conviction, including significant job losses. Justin Trudeau, giving a brief statement the next day, acknowledged an “erosion of trust” between his office and Wilson-Raybould. While he did take responsibility for this, his statement did not offer an apology for what had transpired.

And Canadians, no matter where they might fall on the political spectrum, are rightfully demanding answers.

The first chapter of the Trudeau term was a hopeful time for many—the new government introduced gender equality in cabinet and passed trans rights into law. Unmuzzled government scientists could now speak freely about the environmental crisis facing our planet. The government began addressing the water crisis plaguing many First Nations reserves. And Justin Trudeau himself promised transparency to the Canadian people. It felt like the dawn of a new era—a way to do politics differently.

We’ve strayed far from the “sunny ways” days. With a pipeline controversy, broken promises of electoral reform and Indigenous communities angered by what many see as lacklustre reconciliation attempts, a second term is looking less likely for the seated majority government.

I have always veered hard left in my support of political parties. I’m a woman married to another woman and raising four children, one of whom is transgender. We are the quintessential LGBTQ family and, as such, human rights and safety are a top priority.

The Liberals, with their promise to bring in protections for gender identity and expression, easily won my vote four years ago. But now I stand conflicted. Is this party, with its broken promises and questionable ethics, who I want at the helm for another four years?

I’m not sure. But I’ll tell you who I don’t want: Maxime Bernier and The People’s Party of Canada, whose outspoken populist approach to politics is frightening to most anyone who isn’t white, straight and cisgender. Or the Conservative Party, whose leader, Andrew Scheer, has a voting record that has been troublingly anti-LGBTQ. The Tories’ national campaign manager is Hamish Marshall, a former director of Rebel Media, a right-wing media outlet known for being anti-immigrant and Islamophobic. Recently, both Scheer and Bernier shared a stage with white nationalist Faith Goldy. On that same trip to Ottawa, Goldy posed next to a CBC logo with a backdrop of pride colours and captioned the photo: “Daily reminder that the CBC is gay lol.”

Something tells me this wasn’t meant as a compliment.

So, what’s a lefty to do? The NDP is a possibility, but it currently doesn’t have the support in the polls to win the next election. The left is always at risk of splitting its vote, and in this time of heavy social conservativism, that’s not a risk I’m willing to take. Strategic voting is arguably even more critical now than it was in the last election.

Perhaps we need to consider a new way of doing things. Is our current system truly working for Canadians? As a rule, we flip-flop from the Liberals to the Conservatives, back and forth, each party undoing much of what the other party has done and trying to implement their own vision of the country before the next election. All the while, scandals abound on both sides; the SNC-Lavalin debacle is far from the first and it won’t be the last. Aren’t we getting tired of this perpetual go-nowhere machine?

Or perhaps it’s time we lean in—maybe more women are the answer. Women with integrity, intelligence and resilience. Women like Jody Wilson-Raybould, who refused to bow to pressure and women like Jane Philpott, who dedicate much of their lives to helping those in need. Women like Elizabeth May, leader of the Green Party of Canada, who is respected and admired across party lines and women like Catherine McKenna, Minister of Environment and Climate Change, who hosted a climate summit for women leaders to discuss how to further the Paris Agreement.

I’m not ready to give up just yet. We need to fight for what we believe in, for what matters most to us.

I might be disappointed and angry over this scandal, but I’m far more worried about what could happen if a party rubbing elbows with bigotry gets into office this fall. So, I, like many Canadians, am conflicted, torn between feeling wronged and fearing the right.

Integrity matters, and we should insist upon it, but the rights of all Canadians matter, too.