The Invisibility Of The Single Parent During COVID-19

The pandemic has made it seem like it’s the 1950s again, with single parents brushed off to the side. 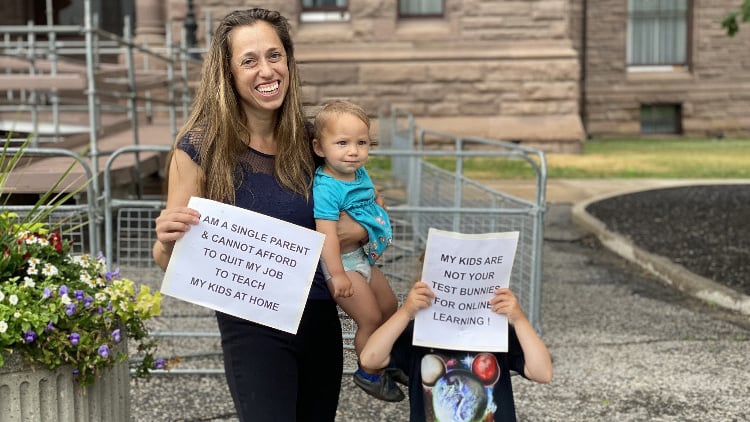 Update, August 1: After this piece was published, SickKids contacted me to let me know their policy on single parents bringing other children to the hospital with them has been changed. “SickKids recognizes that the previous Family Presence and Visitor Policy disproportionately impacted single parent families. The policy has been amended to ensure that single parents who do not have child care options are able to bring other children to the hospital with them when coming for clinic appointments or for other care. SickKids Emergency Department will never turn away any child who requires emergent care.”

In March, I watched, as we all did, as our whole world shut down. No schools. No daycares. No restaurants. No flights. And then came the layoffs. Or, for those of us in the gig economy, the sudden, rapid grinding of all work to a halt.

As a vacation rental owner and performance artist, I lost most of my income, like so many of us did in these sectors; the accommodation and food industry taking the biggest hit, the arts coming in second. I own a vacation rental property near Walt Disney World in Florida which has barely been self-sustaining since the pandemic, and I was supposed to board a plane on March 29 for London, U.K., to perform for four weeks in the West End with the help of a Canada Council Grant. The timing couldn’t have been worse.

Like most parents, I complained to friends about the futility of online schooling, and the impossibility of balancing work without childcare. But when my coupled friends griped about how rough it was that their employers are working them harder than ever before (and this is a real problem), I couldn’t help but wonder if they realized how lucky they were to have a job right now, when unemployment has skyrocketed to 13 percent in Canada. And when they talked about how hard it was to balance remote work and caring for their kids, I wondered if they realized how lucky they were to have someone to pass their child off to.

I am a single parent by choice and conceived both my children using donor sperm and donor eggs. While I chose to take this on, I never could have imagined solo parenting through a pandemic, and the stress it would put on working families with the closures of fundamental societal structures such as daycares and schools.

A few months ago, I had to take my 10-month-old for a COVID-19 test as she had a runny nose and suspicious rash. Her doctor advised me to go to SickKids ER in downtown Toronto, where we live. She told me to call ahead, as I might not be able to bring my four-year-old due to new safety regulations. Sure enough, I was told over the phone that no exception could be made, even for a solo parent. (According to the SickKids website, certain exceptions to this rule are allowed, but apparently my situation didn’t qualify.) Instead, I was told to leave my four-year-old with “someone else.” The assumption was that there was “someone else” (And this was before we were allowed to make social bubbles).

Who would care for my four-year-old during a pandemic, especially if our family was potentially infected? My 77-year-old immunocompromised mother? What friend, neighbour or sitter would (or should) take that risk? It has been made clear that if you suspect you have COVID-19, you should not expose yourself to another person. I ended up having to break social distancing rules and hire a sitter to sit in the underground parking lot in my car with my four-year-old. She read to him until he fell asleep, as it was his bedtime.

Thankfully my baby tested negative, but I was disturbed that my four-year-old was not welcome at SickKids. What if I needed to rush to ER and didn’t have time to organize a sitter? I understand SickKids wants to protect their staff and patients and have as few people in the hospital as possible, but they need to allow for single parents—almost 20 percent of Canadian children are part of a lone-parent family. Following my experience, I reached out to Dr. Eileen de Villa, Toronto’s medical officer of health, for guidance and she said exceptions could be made and to communicate with SickKids. Months later, I am still waiting to hear back from the hospital.

Likewise, as daycares began reopening in early June, I was surprised there was no mention of the need to prioritize single parents.

As far as homeschooling went, as a single parent I never quite figured out what to do with my baby as I attempted to navigate the awkward Google Classroom app, trying to upload my junior kindergartener’s work and figure out which tabs to select to view the day’s many assignments. On one memorable day, I was simultaneously trying to fold the laundry, soothe the baby and have my son participate in a Google Classroom chat. He fidgeted, complained it was too loud and insisted on galloping through the apartment as a horse instead. Can you blame him?

While back-to-school plans in Ontario are set to be announced soon, two of the three scenarios that school boards were asked to prepare by the province involve either part-time or full-time online learning. Has it been forgotten that most families do not have a stay-at-home mom who can routinely facilitate online learning, or childcare on the off days? Are working moms to improvise a patchwork of sitters and homeschooling pods, only to increase our risk of exposure?

I thought we all agreed it takes a village to raise a child. So what are single parents to do—quit our jobs? It’s not surprising that women’s unemployment in Canada has reached the lowest numbers in three decades. Thankfully, we’re now allowed to hire sitters but the inequity of paying for one on a single-family income (if there is still income, as single parents have lost more jobs than any other group) is unfair and only increases the divide between the rich and the working poor.

I am one of the privileged few single parents who has the resources to hire a temporary part-time sitter. However, long-term, a nanny is not financially sustainable for me. If schools don’t fully open in September, and my four-year-old does not have access to affordable daycare on the off days, I don’t see how I can continue to afford my downtown Toronto rent. Also, the savings I’m using to pay for it are actually meant to further invest in my vacation rental business and if I can’t do that, I won’t earn enough going forward and will remain effectively unemployed.

In parts of Germany, daycares remained open for essential workers and single parents. When I heard that, tears burst my eyes. “Their government remembers them,” I thought. Those German states did not forget that it is logistically impossible to parent peacefully without a break and when you add the need to work, or in my case, the need to job hunt, it is a recipe for domestic disaster.

All parents, but especially single parents, need access to safe, full-time school—with the proper funding to ensure real safety during a pandemic.

Also, we need the government to remind essential organizations, like hospitals and daycare, that lone parents are still here, struggling more than you know. Why don’t you see more articles like this or hear more complaints in the news? Single parents may seem invisible right now, but that’s only because most of us have no time or resources to tell you how much we are sinking. We have been silenced, buried beneath tantrums, crumbs and laundry—but I am going to scream until everyone remembers who and where we are.