From The Montreal Massacre To The Van Attack—Why Can't We Say ‘Misogyny’?

We can resign ourselves to accepting the violence or we can commit to fighting like hell to ensure it never happens again. 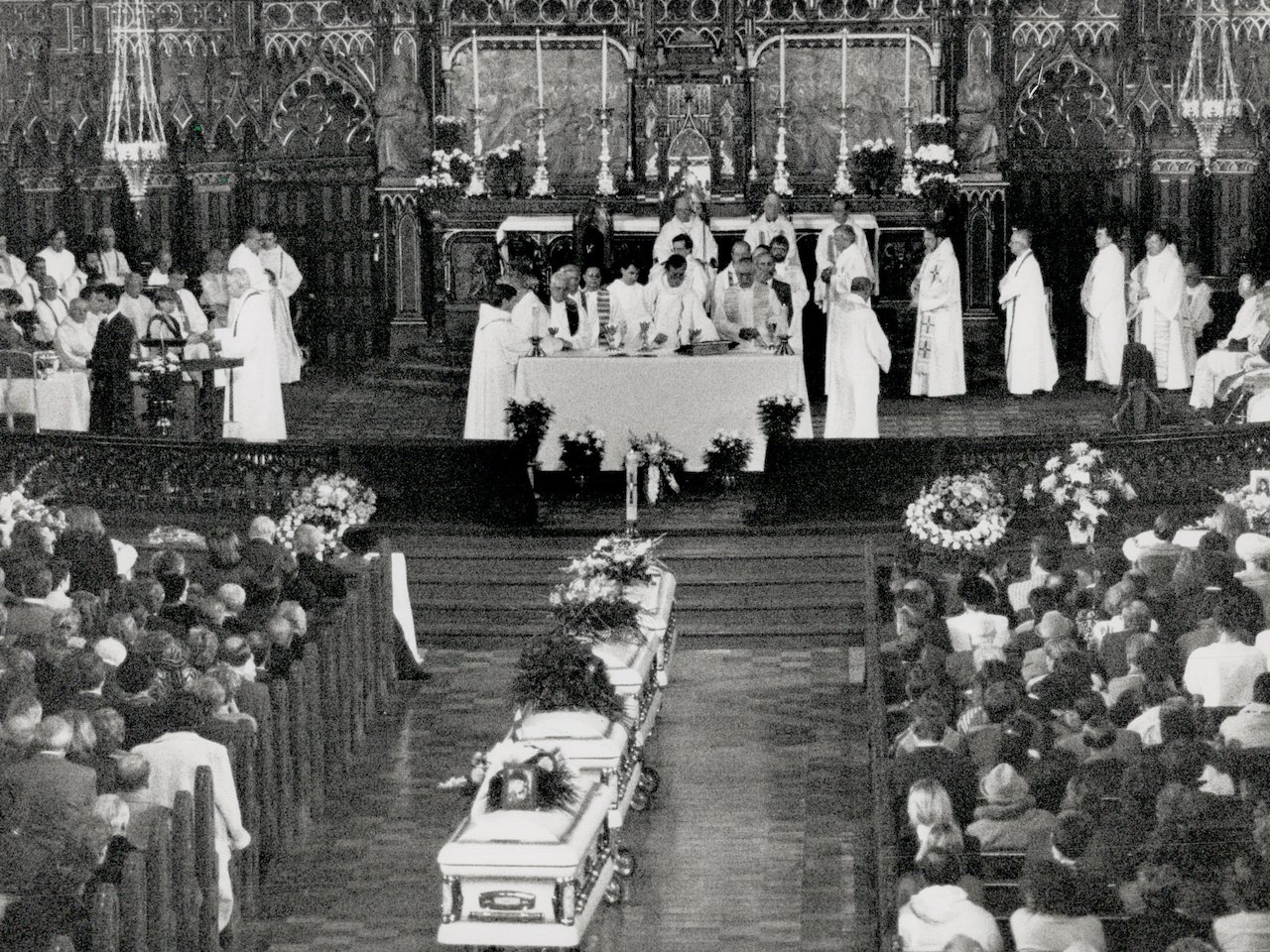 In an attempt to distract myself from the existential dread of the pandemic, I decluttered my house. In doing so, I stumbled upon my first school picture. Wearing a bulky sweater and a mullet, I’m bursting with joy at finally being old enough to start school.

While I was celebrating the beginning of my education, Anne-Marie Lemay was contemplating the end of hers. Late one night, the student at l’école Polytèchnique de Montréal made a note on her bulletin board: “Tomorrow is the last day of class… and the last day of my life. Wow, that sounds really depressing at 3:00 in the morning.”

Her late night existential musings are haunting in hindsight.

Hours after she scribbled that note to herself, a young man, bitter that he didn’t have the grades to get into the competitive Polytèchnique, unleashed a brutal attack that targeted women and left 14 of them dead, including Anne-Marie. Rather than acknowledge his own shortcomings, he blamed women and a fictitious quota system that favoured feminists as the reason for his aimless life.

He targeted women because he hated women.

The massacre of December 6, 1989 would lead to the creation of the White Ribbon Campaign, the world’s largest movement dedicated to engaging men and boys in ending violence against women. It is now recognized as the National Day of Action and Remembrance on Violence against Women.

But it was only when December 1989 was well in the rearview mirror that society at large acknowledged the killer’s misogynist motive. For years, feminists kicked and screamed in the shadows about the male entitlement, misogyny and systemic sexism that enabled the December 6 attack. The rest of Canada stuck to discussing mental health and gun control.

If that feels awfully familiar, it’s because it is.

In 2018, a young man, bitter that he couldn’t get a date, used a van as a weapon as he targeted women in a deliberate attack in Toronto. After a brief altercation with police, he immediately confessed to the crime and his misogynist motive. Eight women and two men were killed in his attack and he was charged with 10 counts of first degree murder and 13 counts of attempted murder.

His trial began this fall and with it came renewed discussion of “incels” as though “men feeling entitled to the bodies of women” is some new, fascinating concept. “Incels” are not interesting. Hating and distrusting women is as old as Bible stories about Eve duping Adam. But everyone—from armchair experts on social media to big-name columnists and even feminist-identified politicians—refuses to name the misogyny. They insist on assigning depth and complexity to male violence against women because the truth is too plain.

They hurt us because they hate us.

Man after man writes manifestos or gives detailed confessions to police, detailing their sexist motives. And still, we twist ourselves into pretzels trying to frame them as criminal masterminds or so mentally ill that we could never prevent their terror. We desperately need to talk about the lack of mental health support in this country but it’s awfully convenient that the gap in crucial services is only spotlighted when a violent man is trying to avoid responsibility.

And while the media kicks around well-worn theories about the root causes of the violence, boys and men toil in the dark corners of the internet, amplifying misogyny and elevating mass murderers into heroes.

Misogynists are guilty of false idol worship, but feminists are equally guilty–of turning femicide victims into martyrs. The humanization of women is the goal of feminism, but we turn dead women into hashtags, snappy protest signs and even memes.

At vigils across the country every year on December 6, we read aloud the names of the 14 women killed at Polytèchnique. It is a powerful moment, but an incomplete one. These women were more than a misogynist’s victim. They were full-fledged human beings with hobbies, desires and dreams. They had lovers, foods they didn’t like, favourite movies.

Thanks to the intrepid spirit of longtime Quebec journalist Josée Boileau, there is now an in-depth look at what happened that day in Montreal. More importantly, there is a belated but detailed portrait of the 14 victims. Recently translated into English, the aptly titled Because They Were Women: The Montreal Massacre paints a vivid picture of the lives lost and dreams dashed.

We learn that Maryse Laganière was the youngest of 13 children and met Jean-Francois, the love of her life, at Polytèchnique in ’86. After her death, Jean-Francois looked at Maryse’s calendar and realized she was five days late. He believes Maryse was pregnant when she was murdered.

Anne-Marie Lemay didn’t just leave an eerie note on her bulletin board. She was interested in medicine but studied engineering after witnessing her childhood friend use prosthetics as a mobility aid. Sonia Pelletier loved to draw her friends with charcoal pencils. Annie Turcotte gave free swimming lessons to disabled children.

The stories are all haunting in their ordinariness. A book filled with photos of smiling, happy young women in chunky sweaters and puffed out ’80s haircuts. Women whose lives were cut short in an act of violence that shocked the country but failed to quell the growing tide of misogyny.

As we mark December 6 in isolation this year, we have lost the ability to take our grief to the streets. But the moment is still ours to seize. We can resign ourselves to accepting the violence or we can commit to fighting like hell to ensure it never happens again.