In a year that every extra person in a room means extra risk, the Conservative government is ignoring our kids' overflowing classrooms. 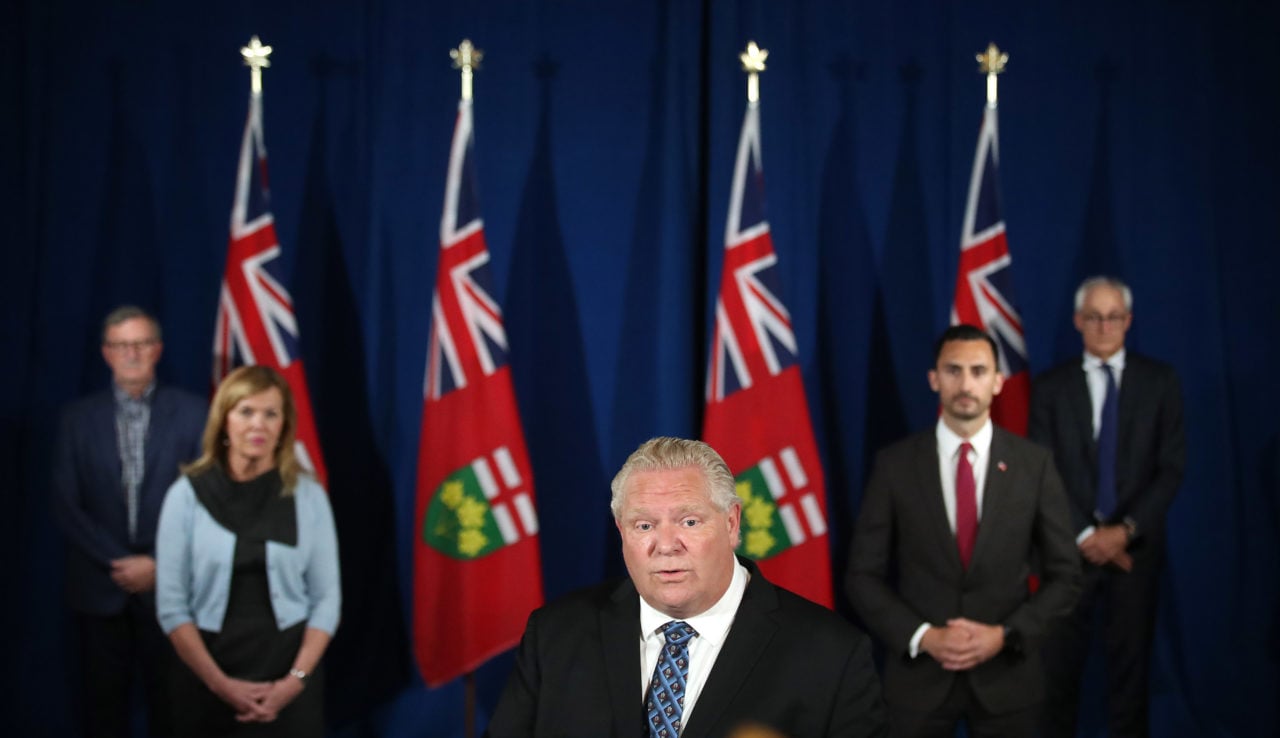 Well, I just dropped my son off for his first day of grade one, in care of a teacher whose name I only learned yesterday, and whose face I couldn’t really see since she was wearing a mask and shield. There are 17 kids in his class, which is very small but more than 15, the preferred number for maintaining a two-metre distance and minimizing the potential spread of the novel coronavirus. That’s according to a study that the Hospital for Sick Children released yesterday afternoon, based on a simulation involving 190 young people and 15 teachers. Given the average size of an Ontario public school classroom, my son should be one of no more than 12 to 15 students.

This isn’t new news, and Ontario Premier Doug Ford and his education minister, Stephen Lecce, seem likely to continue ignoring the recommended pandemic-era class sizes while pretending to care. Just look at the appalling video Lecce put out last week, a two-minute clip with the province’s chief medical officer of health, David Williams. First, Lecce gives lip service to “getting the fundamentals right when it comes to public health,” despite his consistent dodging of his responsibility to mandate (and therefore directly fund) classrooms with fewer kids in them.

Williams kicks the idiocy up a notch, declaring the pandemic “a good learning laboratory” for students to understand “infection prevention control.” If they wash their hands and wear masks, he says, they “for sure” won’t take COVID-19 home to their parents or grandparents. Um, what? Setting children up for blame is pretty low, but the government’s current line is that any potential weaknesses in its sloppy, last-minute plan lie in “the community.” That’s what Lecce said on CBC’s Metro Morning last week, while repeatedly refusing to answer a question about whether he was personally confident in the school reopening process.

Kids need to handwash and teachers need to make them; school boards should use mystery money to do more hiring, and that’s the story the Ontario government is sticking with. Nice try. If an outbreak linked to schools causes another lockdown—let alone overwhelming illness or even death—public school parents will ensure that Ford and Lecce carry that as their legacies, through their political careers and beyond.

The threat of a second wave is looming. On Monday, multiple boards delayed online learning by up to a week, as rising COVID-19 numbers led thousands of panicked parents to switch over from in-class instruction. Positive tests in Ontario have doubled over the past three weeks, up to 313 new cases on Monday, and lineups snaked around testing centres over the weekend. Yet it’s still not easy to figure out exactly how much new provincial money is being targeted specifically at pandemic-related educational concerns, such as class sizes, PPE for teachers and ventilation.

On Metro Morning, Lecce kept touting “net new funding,” the meaning of which is clear as mud: it can’t mean the $500 million in province-wide reserve funds boards are now allowed to dip into, which is simply moving scarce coins from one pocket to another. Ford was touting $100 million for new teachers over the weekend, without mentioning that it includes $70 million from the last-minute infusion the federal government handed over in the last week of August.

This government continues to lie to Ontario. I am an educator in Ontario, and Leece’s claims are 100% false. I see my colleagues’ classes being collapsed daily, and class sizes rising. Ask your kids how many peers they have in their classes. @Stefen01375117 @maritstiles https://t.co/4x8iVkwj0k

In any case, it’s not enough: The Canadian Centre for Policy Alternatives estimates that $100 million would pay for 1,157 new teachers, while the province has almost 5,000 public schools. In a year that every extra person in a room means extra risk, Ontario students, parents and teachers are all over social media reporting class sizes in the high 20s, even over 30. That isn’t in line with COVID-19 recommendations, and in some cases is actually bigger than usual.

That’s partly because distance learning requires shifting teachers online. The result has been “collapsed” classes inside of public schools, some with extra students, some just unwieldy. One Ottawa mom said on Twitter that her child is in a grade 1/2/3 split. Kingston teacher James Griffith has shown multiple reporters his classroom set up for 32 high school students, with rows and rows of desks mere centimetres apart.

Meanwhile, inequalities are deepening. The Toronto Star reports that private school applications in the city are way up, while low-income families are disproportionately opting for online learning, despite a lack of devices and internet access that predated the pandemic. Many such parents told the Star that they can’t afford to get sick—the low pay, lack of sick days and generally shoddy treatment of “essential workers” during this crisis is shameful, and on all of us.

Part of me suspects the Conservatives left school announcements late on purpose. Parental fury already forced them to fold on sex ed and autism funding, and so the current chaos would seem to serve them much better than months of familial organizing. Bigger classes, online learning and a shift to private education—all things that teachers, unions, students and parents have been fighting against since this government took power. Is COVID-19 a problem for Ford and Lecce, or an opportunity?

Yes, fixing it all would be expensive, but so would re-closing businesses during a wave of hospitalizations while heading back into lockdown, resulting in more parents (mostly moms) dropping out of the workforce. More importantly, every child has a right to a decent education, and both Ontario and Canada were far from living up to that responsibility already.

This is an unprecedented global emergency, and parents, grandparents and every Ontarian trying to cope will never forget how the Ford government faced it. That is, by devaluing our children’s schooling, as well as their health and their futures.