Sorry About How This Country Treats Indigenous People? This Canada Day, Think About Giving The Land Back 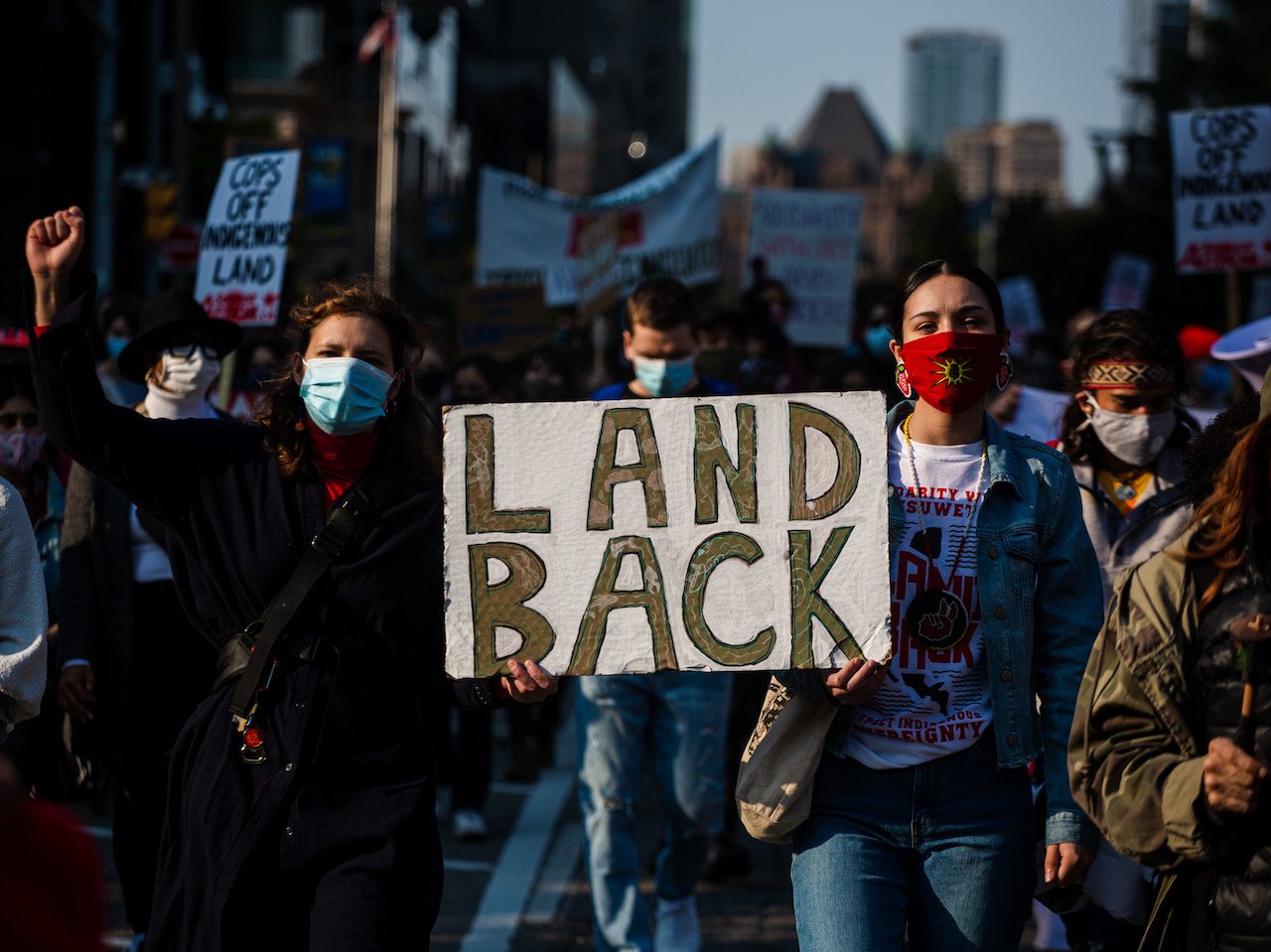 A march in support of #1492LandBackLane and all land defenders in Toronto, October 2020. (Photo: Nick Lachance/NurPhoto via Getty Images)

Canada’s 154th birthday caps off a month of announcements about unmarked graves located on the site of former residential schools—or as we should be calling them, brutal assimilation camps for Indigenous children. In just the past four weeks, teams using ground-penetrating radar have told of 751 bodies found at Cowessess First Nation; 35 found in Lestock, Sask.; 104 found in Brandon, Man. (after two years of searching); and 215, all believed to be children, found in Kamloops, B.C. That’s 1,105 bodies, with dozens of former sites to go.

Each announcement is horrifying, but none should be a revelation to Canadians. Survivors of the institutions have spoken about unmarked graves for decades, as documented in the 2015 report from the Truth and Reconciliation Commission (TRC). Some spoke of having to dig graves themselves, as children. This country never believes Indigenous people until presented with gruesome, irrefutable proof. Faced with it now, we’re all so very sorry—but our sorriness doesn’t matter. What matters is what comes next.

Donating money is a good start, as long as it’s to a truly Indigenous-led endeavour. Insisting that the federal government and the Catholic Church compensate survivors fairly is another. Educating ourselves is a must: I personally was taught nothing about this violent colonialism while attending Canadian schools. My self-education didn’t truly start until 2012, during Idle No More, and there are still huge gaps I need to fill. With over 600 First Nations, Metis and Inuit communities from coast to coast to coast, there is so much history to absorb, and many ideas of how to start repairing this shameful legacy.

But as I keep reading, listening, watching documentaries and asking questions, one core need—and right—keeps presenting itself. It would provide fair reparations for residential schools, and also be a source of healing from the many traumas Canada is still visiting on Indigenous peoples. Boiled down to two words, it’s Land Back: returning a meaningful amount of land to First Nations, Inuit and Metis people, so that they can rebuild their connection to it, and to each other.

All of the injustices Indigenous people face are rooted in land dispossession. Consider the devastating epidemic of Missing and Murdered Indigenous Women and Girls. As detailed in the report from that inquiry, an early Indian Act provision robbed Indigenous women who married non-Indigenous men of their legal “Indian” status, including the right to live on reserve lands. This alienation of women and children from their communities wasn’t even partially rectified until 1985, but by that point reserves often didn’t have housing for thousands of new members.

Taking 150,000 children from their families and sending them to residential schools was definitely “one of the ways that the federal government destabilized Indigenous communities in order to steal our land from us,” says Courtney Skye, a Haudenosaunee friend, occasional Chatelaine writer and policy analyst from Six Nations of the Grand River in southern Ontario.

The move to put Indigenous children in institutions was sometimes a direct play for land—some prairie nations were starved unless they gave up their children and moved to reserves. The “schools” were also a long-term plan. John A. MacDonald’s desire to “take the Indian out of the child” was about breaking the bonds between Indigenous children and their cultures, which is directly tied to their ancestral lands.

That means “if people who have been impacted by residential school, if the women who were forced to leave our community because they lost their status …have any hope of coming back, we need more land,” Courtney says. And while residential schools and the Sixties Scoop are over, thousands of Indigenous children are in state care to this day. If Canada is to stop tearing families apart, they need land to live on, together. 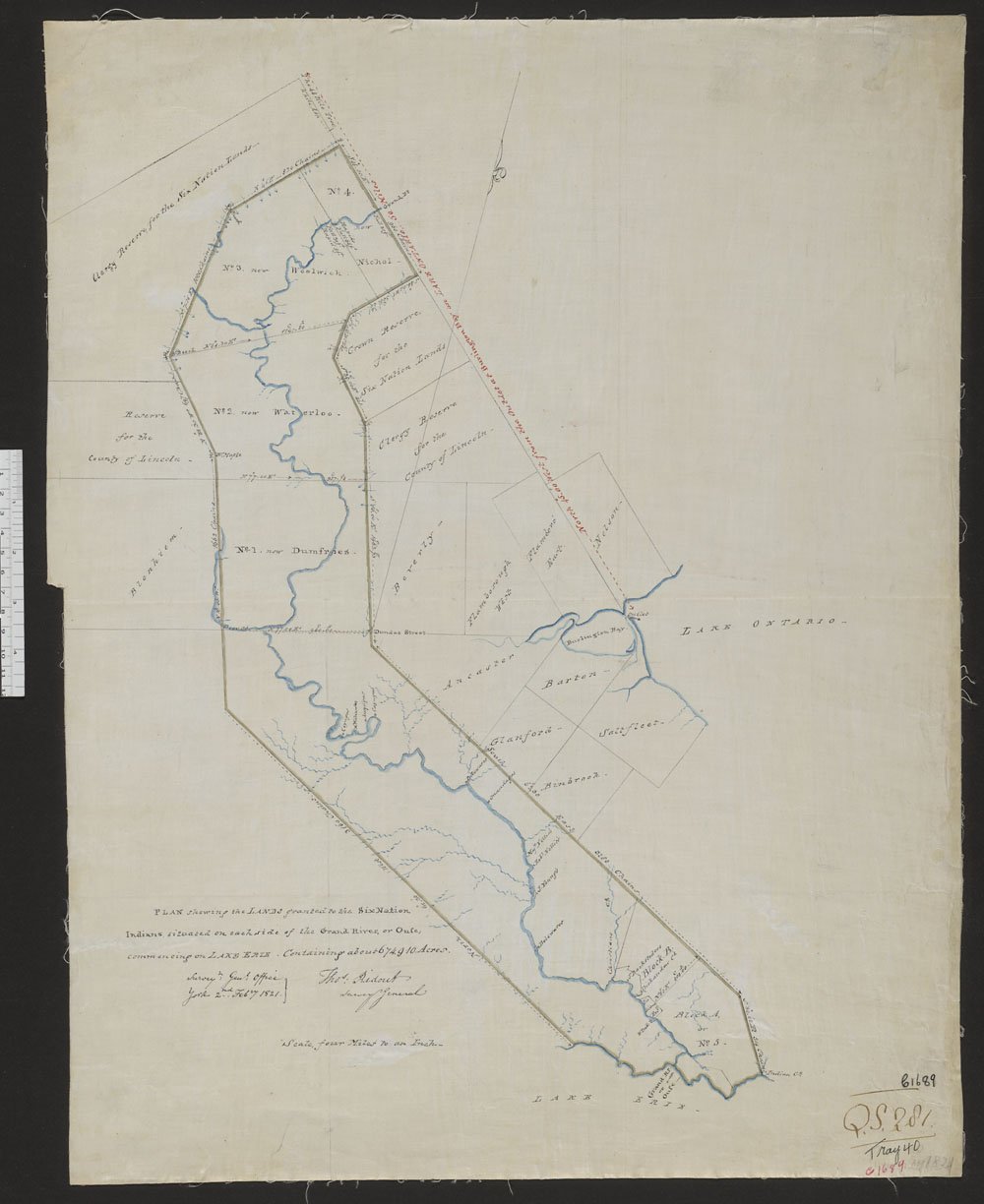 “Plan shewing the Lands granted to the Six Nation Indians, situated on each side of the Grand River, or Ouse; commencing on Lake Erie, containing about 674,910 Acres,” Thomas Ridout, Office of the Surveyor General, 1821. (Courtesy: Library and Archives Canada)

But Six Nations, like hundreds of First Nations across Canada, has been squeezed onto space that’s far smaller than it has a right to. As Courtney has written, in 1784, governor Frederick Haldimand promised 10 kilometres on either side of the Grand River as a reward for helping the English stave off the Americans. Right now the reserve only takes up about five percent of that.

So, for the past year, Courtney has been supporting #1492LandBackLane, a movement to prevent the building of a subdivision on her community’s territory. Last month, the hereditary chiefs at Six Nations also issued a moratorium on any new development on the entirety of the Haldimand Tract lands.

The Haldimand Declaration is just one of hundreds of treaties and agreements Canada is responsible for. To grow up here as a non-Indigenous person is to be told that treaties were signed by Indigenous people who wanted to leave their territories forever, and assimilate into a great new country. To be a grown-up Canadian, though, is to realize that’s nationalist spin. From Sipekne’katik First Nation trying to run their own lobster fishery on the Atlantic coast to Secwepmc people living in tiny houses along the Trans Mountain pipeline route in B.C., it’s clear that many Indigenous people have different ideas about what their communities did—or didn’t—agree to.

And more than once, Canada’s highest court has ruled in an Indigenous nation’s favour. Last winter’s unrest on Wet’suwet’en land, over the Coastal GasLink pipeline, was bolstered by the landmark 1997 Delgamuukw decision, when the Supreme Court of Canada ruled that oral histories are valid evidence of continuous use of land, and that the Gitxsan and Wet’suwet’en nations have unbroken aboriginal title in their territories.

That is to say that the land rights Indigenous people are demanding are often enshrined not just in their laws, but ours. Which brings us back to being so very sorry about residential schools.

As we express our grief and pull on orange shirts, individual Canadians have a choice to make this Canada Day. Because even as our politicians apologize, they’re still trying to exhaust and erase Indigenous people. So we need to decide if we’re better than our governments—if even without their lead, we’re willing to give the land back.

Land reparation is a global issue. I only began to consider the specifics of how it happens here sometime between Idle No More and 2019, while reading about how it was unfolding in Zimbabwe. At that country’s independence in 1980, the vast majority of arable land was controlled by colonizers and their descendants, and for decades, the United Kingdom dragged its feet on compensating white farmers to enable redistribution. Eventually, need, exasperation and anger resulted in a wave of quick, violent seizures that ultimately decimated Zimbabwe’s food security.

In 2019, I was catching up a few years after notoriously corrupt president Robert Mugabe was finally replaced, when a new government needed to figure out what to do next. Hoping that land reparations in Canada could play out better for everyone, I called Kris Statnyk, a Gwich’in lawyer on the west coast. 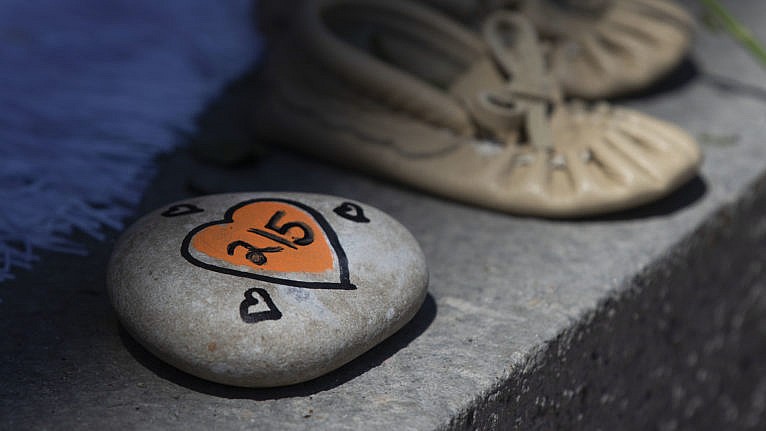 A rock with 215 painted on it is shown before a ceremony in Kingston, Ont., on May 31, 2021, soon after the remains of 215 children were found on the grounds of the former Kamloops Indian Residential School. (Lars Hagberg/CP)

Statnyk said that Indigenous nations here rarely pursue claims over private property, or “fee simple” land as he prefers to call it. For reasons both strategic and practical, claims usually concern land held by some level of government. That means individual Canadians largely aren’t “going to get evicted and get put back on a boat to wherever you came from,” as he put it. (I asked him again last week, and he said he still agrees with that.)

There would still be repercussions for non-Indigenous people, of course. The most significant would likely be to resource extraction, which has been this country’s only real economic plan since before it was a country. Integrating Indigenous agreement—or veto—into extraction ventures is at the heart of many land disputes, and fully granting it across the board would start many oil and gas hearts palpitating.

But Statnyk says that truly recognizing Indigenous land rights could have benefits for Canadians, and considering resource extraction suggests a major one. Environmental scientists around the world have agreed for a long time that securing land stewardship for Indigenous people is a crucial solution for mitigating the climate crisis. In 2019, the United Nations stated that while Indigenous people comprise less than five percent of the world’s population, they safeguard 80 percent of its remaining biodiversity. Millions of tons of carbon are stored in forests managed by Indigenous people, including the boreal forests in Canada.

Their global success at keeping the planet and wildlife healthy is despite the fact that governments only legally recognize Indigenous rights to about 10 percent of the world’s lands. It’s also despite the fact that land defenders often risk state violence—from Brazil, to the Philippines, to Canada. In 2007, the former Ipperwash Provincial Park in Ontario was returned to the Chippewas of Kettle and Stony Point First Nation, but only after years of legal battles and a 1995 standoff during which the Ontario Provincial Police (OPP) shot and killed a man named Dudley George.

Along with space for her community, Courtney says that the Grand River is an essential part of their battle. “The river is incredibly polluted, it cannot handle more development,” she says. “We’re told that we’re not smart enough or capable enough to actually steward the land, let Canada do it for us because they know better. But your land stewardship hasn’t actually protected the health of the river.”

In recent years, non-Indigenous people increasingly tell her that they wouldn’t have bought their homes if they had known it was on Six Nations land. Courtney says that although none of the Haldimand Tract is Crown land—it’s either already developed and sold, or held by developers—she’s also not talking about “kicking people out of their houses.” What she and Statnyk both suggest is that people leave their land to a local First Nation in their wills.

A month of unmarked graves full of children’s bodies has certainly made us uncomfortable. This Canada Day, spend some time figuring out what to do about it.